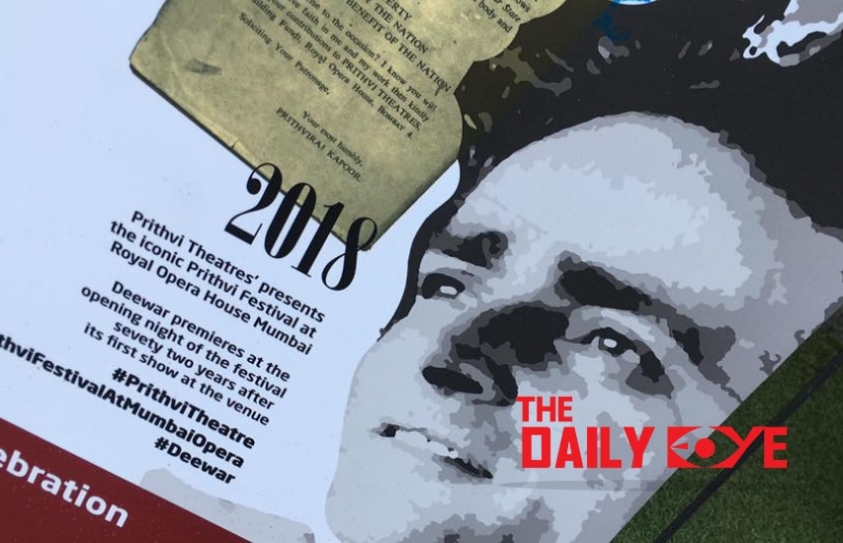 The Staging of DEEWAR in India 2018

Prithvi Theatre opened to the public on a day in 1978, forty years ago. It is today an address that apart from being a cultural landmark is often referred to by the local taxi-driver, auto-rickshaw driver, tourist guide, Mumbai citizenry while navigating the metropolis. The venue has built cultural bridges, platforms and broken many walls of alienation and distance. The enduring legacy of Prithviraj Kapoor’s Prithvi Theatres held its Celebrating 40 Years of Prithvi Theatre with its theatre festival from 3-12 November 2018. 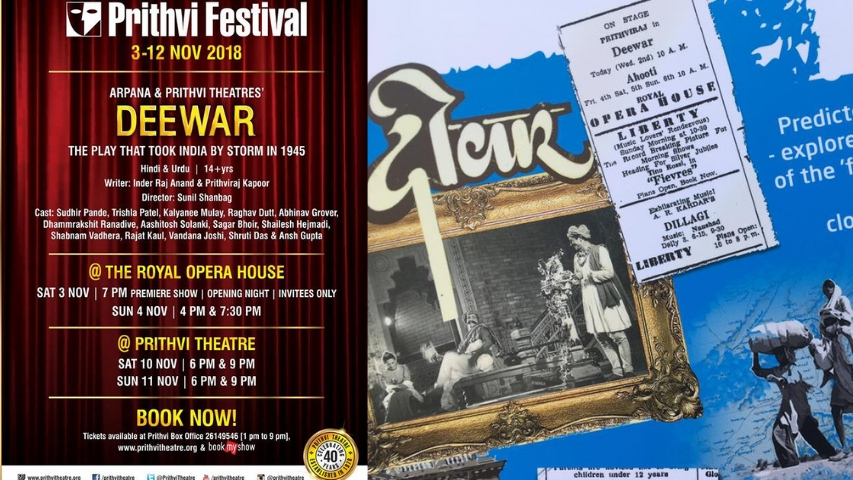 Not fortuitously, but most intently, theater group Arpana & Prithvi Theatres’ chose to adapt and re-visit the iconic play ‘DEEWAR’ under the expertly chiseled direction of Sunil Shanbag (Sangeet Natak Akademi Awardee) with writing credit to Abhinav Grover & Nikhita Singh. ‘The Play That Took India By Storm In 1945’ was written by Prithviraj Kapoor and Inder Raj Anand. A souvenir note as a preserved memorabilia reads ‘ON STAGE PRITHVIRAJ IN DEEWAR’. Future would record it as ‘Predicted Partition—explored the effect of the ‘foreign hand’ in dividing a close-knit family’. Now in the 112th  year since Prithviraj Kapoor’s birth and several decades later from it’s first show the play was re-connected to a new India. Would it be able to break the wall that the passage of time may have built? Would it be a difficult subject to make topical to the new age audience?

This new production’s premier performance was held on November 3, 2018 at the historic Royal Opera House at Charni Road. It was once the local home-space of Prithvi Theatres and its touring company. Rishi Kapoor in his autobiography talks of his acting debut as a five-year-old lying in the lap of his stage-mother during a scene in ‘Deewar’.  In the present the inaugural show in 2018 was followed by shows at Prithvi Theatre in Juhu. I was in the houseful audience at Prithvi Theater on 10.11.2018 for the 6 p.m. show.  The 57 year old me marked that this particular show majorly comprised of an audience profile that was elderly, not just adult. There were men and women, couples, who appeared to be even in their eighties. The connect of the play with its historical past must have defined the audience profile.

The new ‘Deewar’ is set in the same original time frame of pre-independent/pre-partitioned India in the historical year of 1945. It was an India caught in tumultuous unrest of birth-pangs. But……. “It was important for us not to present the play as a museum piece, but as something that resonates with our times. I am glad some of that has worked. Yes, we are getting older audiences for the play, and that is very exciting for me,” director Sunil Shanbag would later inform me.

At the start of the play two contemporary characters (a boy and a girl) come on stage to debate the relevance of ‘Deewar’ in India 2018. Is the play relevant in the now? They look for their grandmother/parents in the audience. They also talk in English. The reviews from the archives are read out. Fade out. Fade in.

Within the setting of a palatial haveli in India 1945 unfolds the story of a closely bonded and blissful joint family of two brothers. They are rich, noble jagirdaars/zamindars who live in a fictional jagir in north India. The two brothers cohabit a happy family and live harmoniously with a community of peasants. Into this scene walk in a Pardesi Couple seeking refuge for the night. The foreigners find a most generous host embracing them in mehmaan-nawazi. Their continued stay stays on to make the native family members impressionable to foreign habits. It leads to dramatic turns of fortune and machinations. It turns one brother against another and splits the native community. Discord, doubts, political and social dissents follow…..the jagir is to be usurped and manipulated. A Deewaar/Wall comes up between the erstwhile loving joint family. It is physical and metaphorical. For the young, contemporary 2018 gaze, the play also contextualizes itself in the present and goes on to give an insight into new questions that confront us in the now. It provides references to our historical past that had flagged idealism, promises, but also raised its own questions. There are walls that the passage of time built, broke and new walls that social-political-cultural India in the present continues to face. The text raises questions on class divides, varna-ashram, savarna, agriculture v/s industrialization, foreign rule, communalism, farmer uprising, Chauri-Chaura-Kand, imperialism, nation or family and most significantly the lingering Q, ‘Was India ever one nation and one family?’ The young pair of narrators appear to bridge the gap for the audience between the Deewar of yore and the Deewar of now. ‘Deewar’ plays metaphorical, satirical, even farcical with songs talking the spirit. The play is true to the nobility of its original as an allegory of colonization, partition, tumult, struggle for freedom and a new hope of nationhood.

A very fine ensemble cast is led by veteran actor Sudhir Pande as the elder brother-patriarch Suresh, a part that would have been played in the original by Prithviraj Kapoor himself.  The character of boy Ramu/Romeo was back then essayed by Raj Kapoor. Actor Abhinav Grover herein carries in his  characterization, as a tribute, the mannerisms of the celluloid tramp that RK immortalized in our cinema.

The audience of 2018 is free to interpret the play also via contemporary signals that beep in their minds. At the end while the actors on stage and some in the audience were collectively singing ‘Hum dekhenge…’ a mobile in the audience beeped and rang loudly. I smiled. A family heirloom kinda flashback popped up in recall. My 87 year old father as a very young man had in the early 1950s at Muzaffarpur in Bihar played host to Prithviraj Kapoor and members of Prithvi Theatres when they had come to stage their play at the invite of Shri Madan Verma. The play was staged at  ‘Chitra Talkies’, a movie hall, that was  owned by Madan Chacha.

Arpana was established in 1985. The core group, the founders, comprise of Sunil Shanbag, Shishir Sharma, Akash Khurana,  Lata Sharma, Reetha Balsavar. From its very start the group staged plays and moulded players in the kind of theatre that established its definite mark. It has presented plays that have been very innovative and original. Starting off with plays by Vijay Tendulkar, such as, ‘Mat Yaad Dila’ (directed by Akash Khurana) and ‘Cyclewalla’ (directed by Sunil Shanbag) the group went on to create and stage path-making plays that took them across India and onto the global stage. A most impressive roll-call of plays include: ‘Cotton 56, Polyster 84’, ‘Mastana Rampuri Chappan Churri’, ‘S*X, M*Rality and Censorship’, ‘Walking to the Sun’, ‘Maro Piyu Gayo Rangoon’ (invited by the Shakespeare Globe Theater in London to present an original Gujarati adaptation of ‘Alls Well That Ends Well’ at the prestigious Globe to Globe International Festival in May 2012. It  did two seasons at the Globe. The Hindi version played as ‘Mere Piya Gaye Rangoon.’), ‘Stories in a Song’, ‘Club Desire’, ‘Loretta’.  Sunil Shanbag as the director helms the productions.