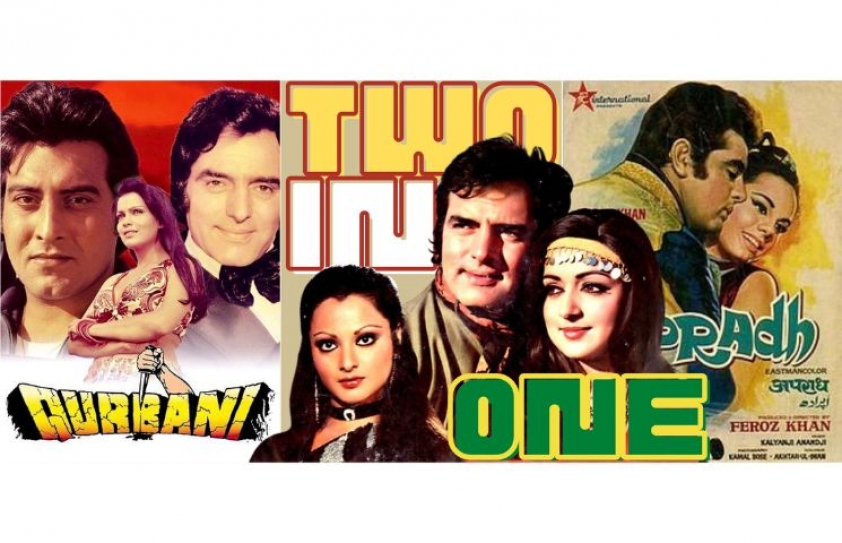 Film historian Dhruv Somani tracks the double-pronged career of Feroz Khan, as an actor and director of tremendous swag and style.

Newcomers kickstart their careers by accepting whatever is offered to them initially. They are not in a position to pick and choose and land up doing some random, insignificant project roles. It is only steadily that the journey towards stardom begins. At times, some actors master their art and move on towards direction.

This has been evidenced in the cases of Manoj Kumar (who is rumoured to have ghost directed quite a few of his films), The Kapoor clan (Raj, Shammi, Shashi, Randhir, Rishi and Rajiv Kapoor), the Khan brothers (Feroz, Sanjay and Akbar Khan), Hema Malini, Sadhana, Rajendra Kumar and Dev Anand. More lately, Ajay Devgn successfully assumed the role of an actor-cum-director. 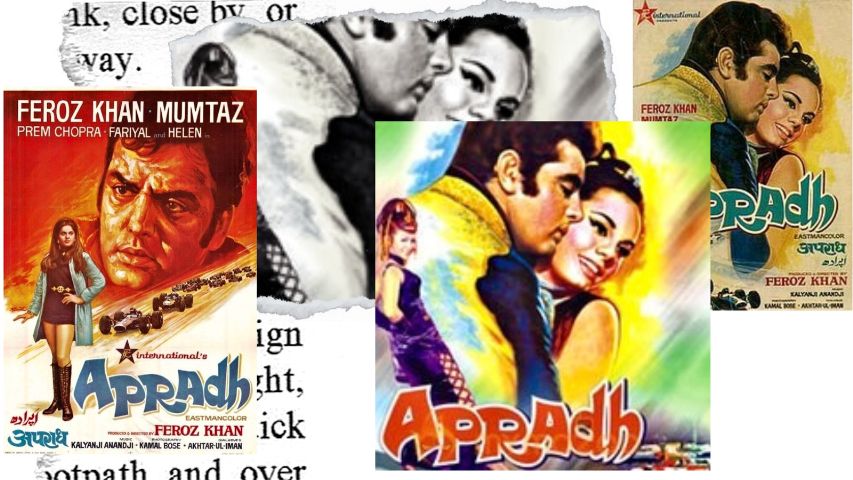 Apradh was a slick crime thriller starring Feroz Khan, Mumtaz, Prem Chopra, Iftekhar, Fariyal, Madan Puri and Helen. It was his debut as a producer and as a director. Apradh was set in Germany: Grand Prix racer Ram Khanna is framed to a crime by a beautiful girl Rita whose real name is Meena, and is an active member of a smuggling gang. It was one of the first modish and sophisticated films of those times.

The music by Kalyanji Anandji became popular, especially the dance number by Helen, Ae Naujawan Hai Sab Kuch Yahan, which was used in the international video by Funky Bijou.

Feroz Khan’s contention was that ever since he directed Apradh and tasted the satisfaction of making films, he could refuse big banner films. Incidentally, no LP vinyls were released on Apradh, only Eps and SPs were released. Years later, in 2010, HMV released an LP vinyl. 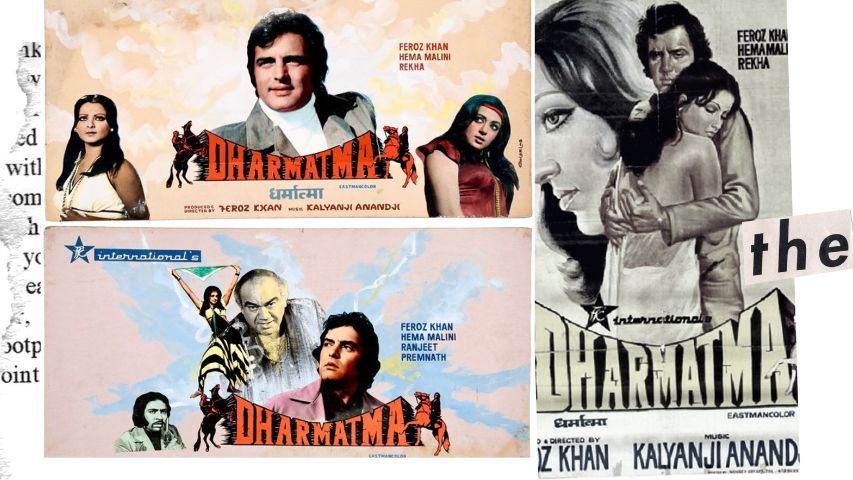 The thriller Dharmatma was the first Bollywood film shot in Afghanistan, starring Feroz Khan, Hema Malini, Rekha, Premnath, Danny, Farida Jalal, Imtiaz Khan, Ranjeet, Dara Singh, Fariyal, Zaheera, Sudhir and Madan Puri. It was inspired by The Godfather (1972). And the memorable music was by Kalyanji Anandji. It narrated the story of Ranvir who is against the illegal business of his father Dharamdas (also known as Dharmatma). It moves to Afghanistan where he meets his soulmate Reshma who is killed in a bomb blast.

On his return to India, he finds his father and brother-in-law Kundan injured in an attack by a rival gang. The father dies in the hospital and now the hero is on the run to find his dad’s killer. Rekha played a small part of Anu, his love interest, after Reshma is dead. Not many are aware that Khan had offered Rekha’s role to Zeenat Aman initially, who declined saying she did not want to do supporting roles, which had upset him. Years later, he offered her a full-fledged role in Qurbani.

In Dharmatma, Feroz Khan was thinking of casting Rajesh Khanna for the role that was eventually essayed by him, but the superstar of that era had no dates to spare. Hema Malini never looked as beautiful as she did in Dharmatma. The song Kya Khub Lagti Ho Badi Sunder Dikhti Ho and the songs Tere Chehre Mein Woh Jadoo Hai and Tumne Kabhi Kisi Se Pyar Kiya Hai were major hits. 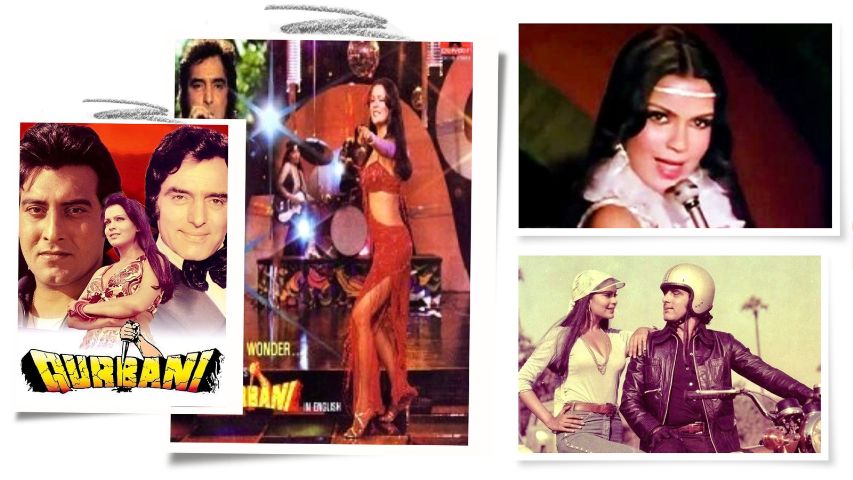 A separate vinyl L.P. with the songs dubbed in English was also released. Pakistan’s Nazia Hassan was introduced, as a singer, in Qurbani and rose to fame instantly.

Feroz Khan, in a scene, was shown smashing a Mercedes car with actor Amrish Puri, and had demolished a brand-new one. Not many are aware that the role enacted by Vinod Khanna was initially written for Amitabh Bachchan. The heavy cost of the film was recovered by the music sales alone. Zeenat Aman became the Number 1 heroine after Qurbani; she looked ravishing. Hordes of directors wanted to sign her in similar roles thereafter. 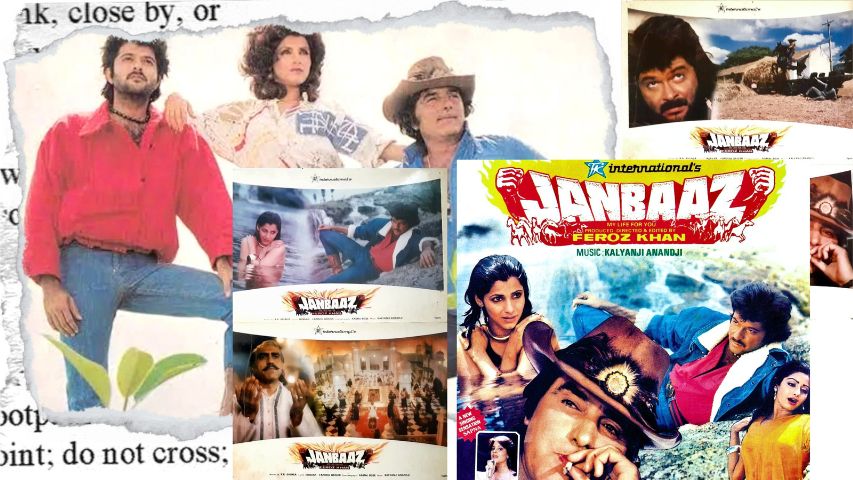 Janbaaz was a title, which Feroz Khan borrowed from writer Salim Khan as he had also written the script with the same title, which was to be made in Hindi and English. Previously, Khan had planned a film titled Kasak immediately after Qurbani, that was to star Feroz Khan himself, Sanjeev Kumar, Shatrughan Sinha, Rekha and Parveen Babi. He had also signed Zeenat Aman as the lead, but due to changes in the script he felt Rekha suited the role better. It was shot for two months, after which Parveen Babi disappeared overseas owing to her health issues. Khan decided to shelve the film and started making Janbaaz with the same cast minus Sanjeev Kumar. He also shot a song with Rekha, Pyar Do Pyar Lo, after which she was out of the film as it was getting too bold for her comfort.

Feroz Khan finally shelved the bold subject and restarted Janbaaz with an all-new cast: himself, Anil Kapoor, Dimple Kapadia, Sridevi (in a cameo), Arti Gupta, Dilip Tahil, Amrish Puri, Shakti Kapoor and Raza Murad. He retained the song he had shot with Rekha for Janbaaz, which became a chartbuster along with the other songs.

Here was another slick action thriller based on the subject of drug addiction, with kickass music, which did very well, although not in the league of Qurbani. Dimple and Sridevi were at their glamorous best. 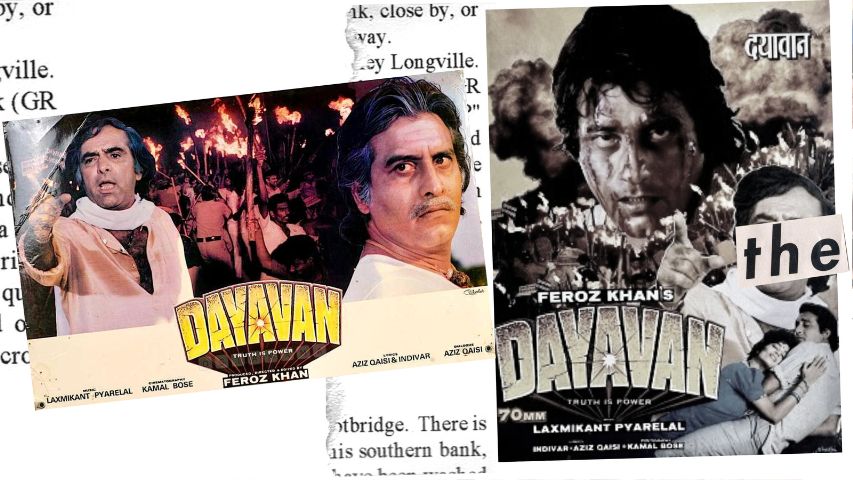 It did well and earned critical appreciation. The film remains a landmark film in the career of Vinod Khanna who played the title role of Shakti Velu who eventually turns into a good-hearted don fondly known as Dayavan. He marries sex worker Neelu, a role memorably essayed by Madhuri Dixit.

Unfortunately, the film was more in the news for the passionate love scene between Vinod Khanna and Madhuri in the song Aaj Phir Tumpe Pyar Aaya Hai. It was a scene she regretted doing later.

This was Feroz Khan’s second film on the lines of The Godfather after Dharmatma. The Tamil Nayakan was a whopper hit starring Kamal Hassan. Hence there was considerable pressure on both Feroz Khan and Vinod Khanna to assert their calibre and worth.

After Janbaaz, Sridevi was very keen to do Davayan but had to back out as Khan wanted her to wear a costume that left nothing to the imagination. Southern star Ramya Krishnan performed the catchy item song Chaye Meri Jaan Tu Le Le. She appeared in Bollywood films much later with Subhash Ghai’s Khalnayak (1993). 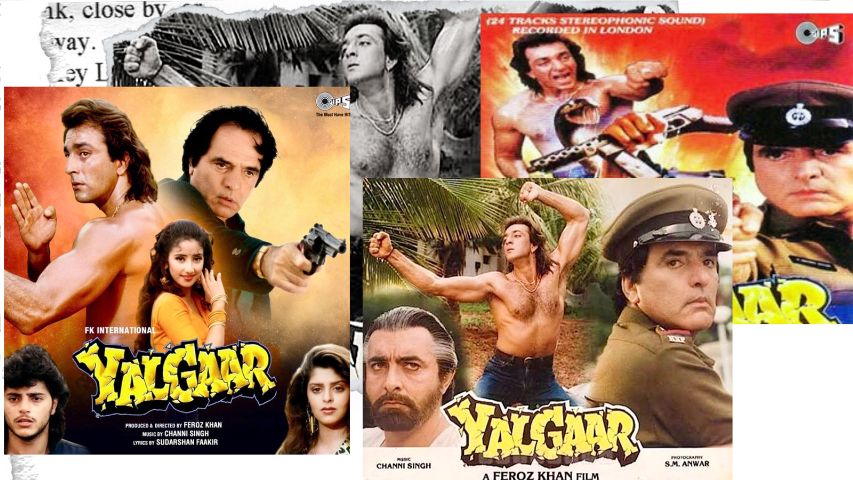 Yalgaar was yet another action film produced and directed by Feroz Khan based on the underworld, starring himself, Manisha Koirala, Sanjay Dutt, Nagma, Mukesh Khanna, Deepti Naval, Manjeet Kular, Kabir Bedi and newcomer Vicky Arora. It was about two childhood friends who land up on the opposite side of the law.

One is a police commissioner while the other is an underworld don, which causes friction in their friendship. Feroz Khan gave himself the more central role while newcomer Vicky turned out to be a poor performer. The music did well with songs like Aakhir Tumhe Aana Hai and Ho Jaata Hai Kaise Pyar but that wasn’t enough to rescue the film at the cash counters.

Initially, Khan had wanted Jackie Shroff and Anil Kapoor to star in the film but it did not work out. The original heroine of the film Juhi Chawla was dropped and Nagma was signed opposite Sanjay Dutt at the ninth hour. The action-packed climax was shot in Dubai. 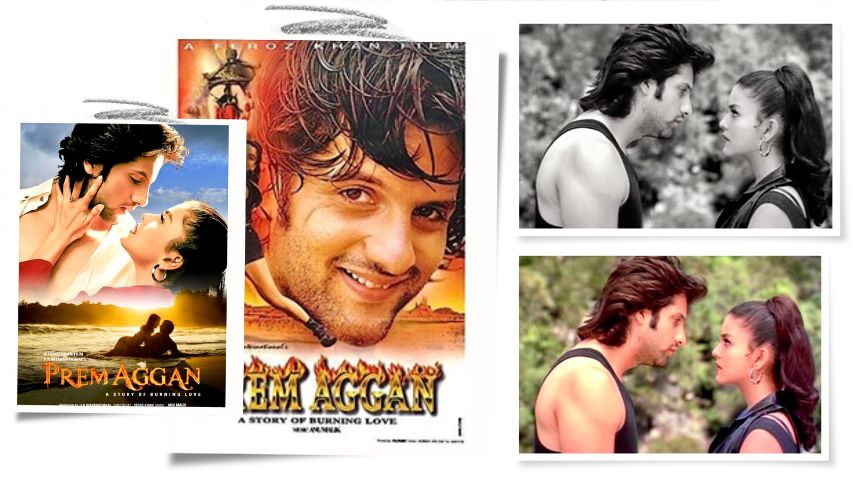 Written, produced and directed by Feroz Khan, Prem Aggan introduced his handsome son Fardeen Khan opposite debutante Meghana Kothari, along with himself, Anupam Kher, Shama Sikandar, Sameer Malhotra, Raj Babbar and Satish Shah. Fardeen was appreciated for his performance and good looks and also won the Filmfare Best Debutant Male award. But Prem Aggan was a failure. It tanked since the audience expected an action movie from Khan, and not a love story, as he was known for his sleek action films. 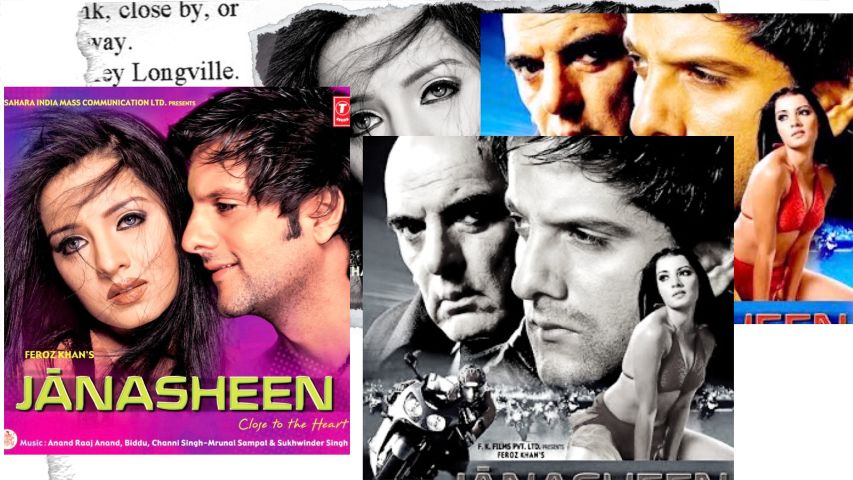 Here was an action romantic thriller starring Feroz Khan, Fardeen Khan, Celina Jetley, Harsh Chhaya, Yash Tonk and Kashmira Shah. It was well shot in Thailand and Afghanistan yet it failed to create any ripples at the ticket counters. He made newcomer Celina Jetley stand in a bikini playing the violin in the waters of Krabi Islands to create a hype, yet it failed to create a buzz. After Janasheen there were reports of him remaking Qurbani with son Fardeen Khan and Sushmita Sen as they had even appeared together on the cover of Filmfare magazine, but had to take a sabbatical owing to his ill health.

Yet there’s little doubt that the actor who had belted out impressive performances in Aarzoo, Mela, Aadmi aur Insaan and Khotey Sikkay, left a tremendous mark on Bollywood cinema as producer and director of quality, fast-paced entertainment.