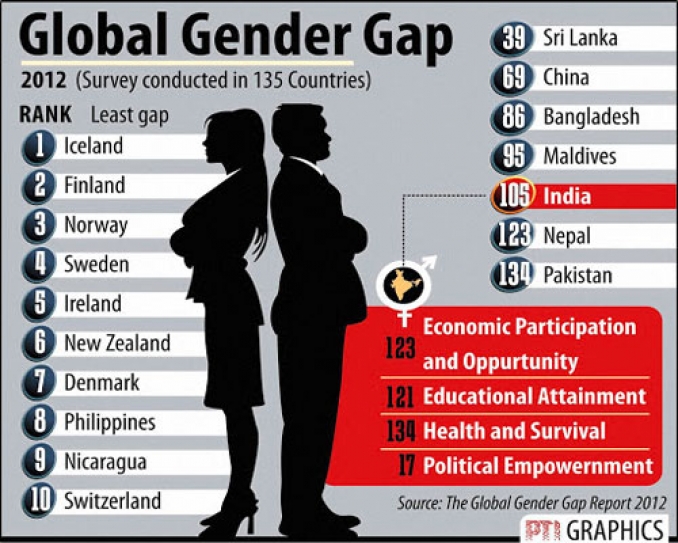 MUMBAI: A plummeting child sex ratio is largely to blame for India’s poor performance in the 2013 Global Gender Gap Index released by the World Economic Forum. India ranked a lowly 101st of 136 countries, indicating huge disparity in access of women to economic, political, educational and healthcare opportunities and their participation in such services.

The global index has been annually benchmarking gender disparity within and between countries from 2006. While India has bettered its rank by four positions from the previous year, it emerged at the near-bottom of the heap, before only Azerbaijan, when it came to a sub-index which measured gender gaps in health and survival.

The sub-index is derived from the sex ratio at birth and life expectancy, and offers insights into the differences between women and men’s health in a country. “In 2013, thirty-three countries have closed the gap in health and survival. China, Albania, India and Azerbaijan remain the lowest-ranking countries on this sub-index,” states the report.

Lakshmi Lingam, deputy director, Tata Institute of Social Sciences, believes India has traditionally been schizophrenic in its treatment of women, worshipping them on the one hand and neglecting the girl child on the other. “While countries like China too have a male preference among children, they have less discrimination in healthcare services made available to children,” she says.

That India has a long way to go is evident from the fact that it has the widest gender gaps among similar economies. It is the laggard in the BRICS bloc, with Brazil, ranked 62, Russia (61), China (69) and South Africa (17) meting out better treatment to its women. While none of the countries analysed have achieved gender equality, we can draw lessons from the Nordic countries of Iceland, Finland and Norway, which have consistently ranked at the first three positions, having closed over 80% of their gender gaps across sectors.

The findings come as no surprise, believes A L Sharada of voluntary organization Population First, who points out that India has traditionally been “very backward” when it comes to social development and gender parameters. “We don’t lack government programmes, but the challenge lies in half-hearted implementation and corruption,” she believes.

The only sign of optimism lay in political empowerment of women. Despite Parliament dithering over passage of a women’s reservation bill for equal representation in the legislature, India bagged a healthy ninth rank when it came to political empowerment of its women. This is perhaps owing to the fact that the index lays great emphasis on a female head of state, earning brownie points for Pratibha Patil’s stint as President. After all, nearly 65% of countries around the globe have never had a female head of state in the past 50 years.

Lingam believes a multi-pronged approach is needed. “We have a lot of sexual violence today that is further widening the gender gap. There is also a wage gap at workplaces, so women who are employed aren’t necessarily economically empowered,” she points out.