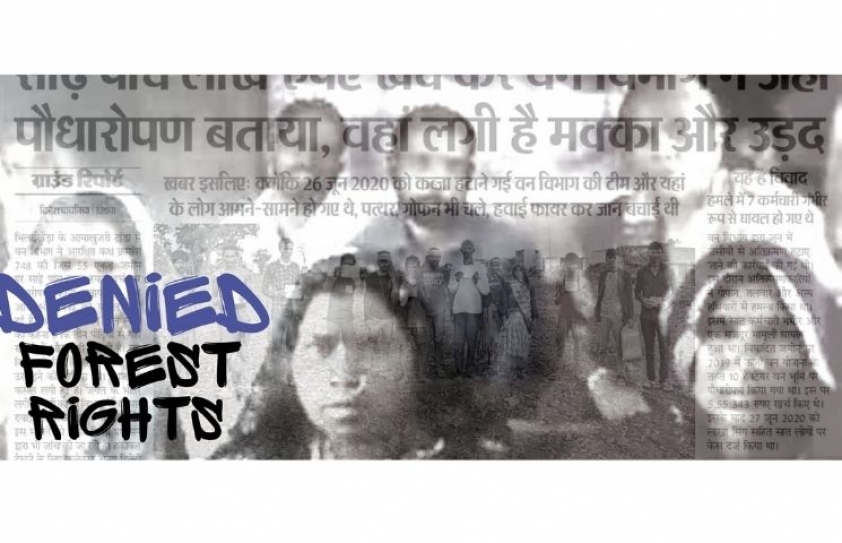 In a press conference held by Citizens for Justice and Peace (CJP) on the 26th July 2021, Ratan Alawe, Antaram Awase, Asha Bai Solanki and Madhuri Nitin spoke to Teesta Setalvad about organized violence against adivasi communities and how they are coordinating among themselves to protect their rights as corporate control over forests escalates.

Around 3000 adivasis, more than half of them women, stormed the office premises of the District Collector and forest officials at Khandwa Madhya Pradesh (MP) on 21st July protesting illegal evictions, assault and violence against the inhabitants of the region, especially the recent incident in which forest and police officials, along with a large mob had destroyed the homes and fields of forty families in Negaon, Jamaniya and looted all their belongings.

The protestors also pointed out that this was not an isolated incident but a part of a pattern of violence involving systematic violation of their legal rights. Repeatedly, the protestors stated: “If the government does not know the law, we will teach you”. They pointed out that the eviction was a violation both of the Forest Rights Act as well as orders of the MP High Court prohibiting evictions during the pandemic, as well as illegal atrocities against adivasis. Khandwa is also the home district of Shri Vijay Shah, the Forest Minister of Madhya Pradesh.

‘The Scheduled Tribes and Other Traditional Forest Dwellers (Recognition of Forest Rights) Act 2006’, commonly known as the Forest Rights Act, was passed to provide comprehensive forest rights and to rectify the “historical injustice” in forest areas since British times. It has been in force since 2008, but in the past 14 years little has been done to recognize these rights and forest-based communities continue to be insecure and prey to repeated violence.

The Forest Rights Act in section 4 (5) prohibits any eviction until the procedure for verification and recognition of rights under the law is complete. But before the verification process had even begun for the forty families of Negaon, Jamaniya, they were brutally and illegally evicted. 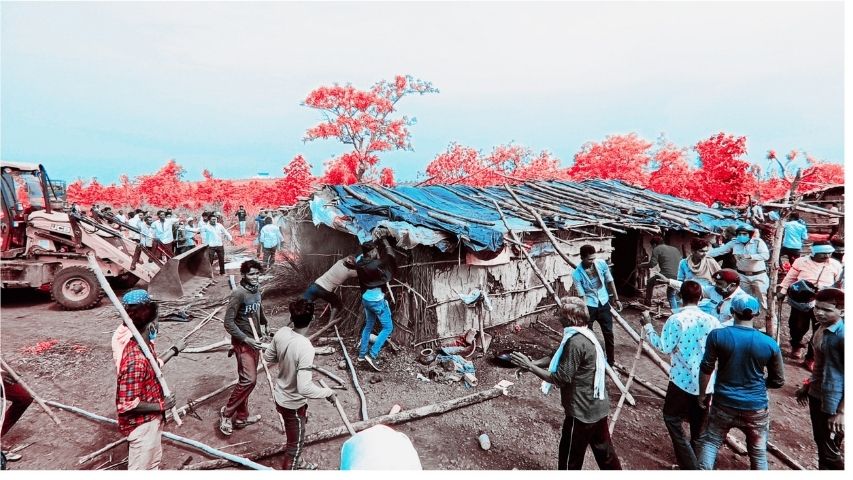 The forest and police officials facilitated the looting of all the belongings of these families by a mob brought from nearby villages, including 130 quintals of grain, 309 chickens, 16 goats, 5 phones, 4 cycles, 63,000 rupees in cash, utensils and other household goods. A cow calf was killed during the demolition of homes. These families are now left with nothing except the clothes on their backs. The adivasis, who joined the protests on the 21st July 2021, came with grain contributions for the affected families, which will help manage for about a month.

These families have been on this land for several years. A Grievance Redressal Authority appointed upon the directions of the Supreme Court (SLP no. 15115/2011) to look into complaints of atrocities against adivasis in Khandwa and other districts had found that though these families had been on this land for several years before the inception of the Act, they were being repeatedly subjected to evictions and that action should be taken against the then Divisional Manager/DFO due to his negligent and apathetic attitude towards the law and Court directives - Order dated 07.11 2015.

This eviction was also a violation of the orders dated 23.04.21 of the Madhya Pradesh High Court in WP 8820/2021 (suo motu re:Covid), which prohibits any eviction during the pandemic - direction no (ix). This prohibition had been extended till 15th July and was in force at the time of the assault on Negaon-Jamniya. It has now been extended till 23rd August.

On 10th July, many villagers, including women were beaten up. Three villagers, Ramlal, Mahesh and Sekariya were beaten and forcibly taken to the forest office in Khandwa where they were locked up and their hands tied with ropes. When Jagrit Adivasi Dalit Sangathan (JADS) activists Nitin Varghese, Ramesh Jadhav and Amarsing Solanki pointed out the illegality of the eviction and violence as violating both the Forest Rights Act as well as the MP High Court order, they were roughed up, their phones were snatched and they were forcibly locked up in the office of the DFO (Forest Development Corporation) overseeing the eviction. These persons were released after more than 10 hours only when around 200-300 adivasis sat on dharna outside the office of the SP, Khandwa, demanding their release. They were forced to sign on blank papers and their phones have still not been returned at the time when this report is being published. 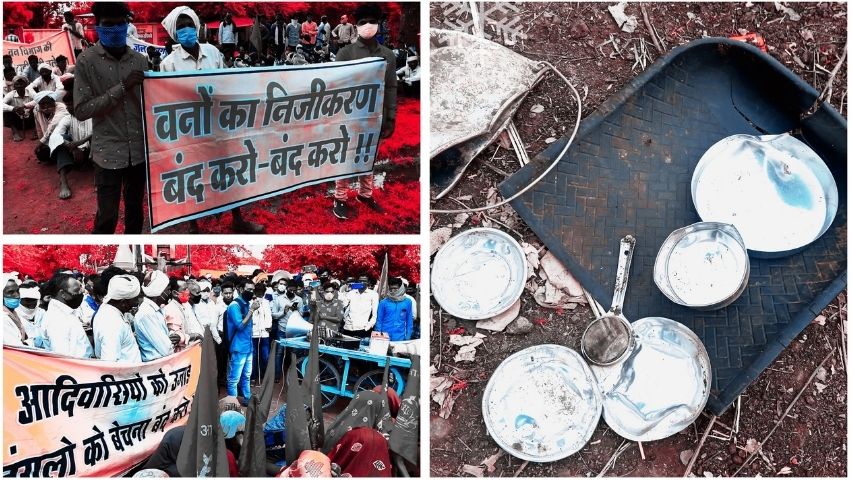 The now destitute families, as well as JADS through protests and several written complaints to the Chief Minister, the Forest Minister Shri Vijay Shah, Tribal Welfare Minister Smt Meena Singh Mandve, the Minister-in-charge of the district Smt Usha Thakur, the Collector Shri Anay Dwivedi and SP Shri Vivek Singh, as well as complaint at the concerned police station has demanded action against the concerned officials for violation of the Forest Rights Act against eviction before settlement of rights, violation of High Court orders against eviction during the pandemic, violation of 3 (1)(g), (r), (z), and 3 (2)(va) of the Prevention of Atrocities Act, Dacoity and looting of the belongings of the adivasi families and abduction and illegal confinement of 6 persons. However, the silence on the part of the MP government and the administration is deafening.

The violence in Negaon-Jamniya is not an isolated incident: There have been frequent incidents of evictions and attempted evictions, as well as assault and adivasis being locked up and beaten in Range offices. This violence is especially frequent in Khandwa-Burhanpur districts though it is common all over the State. Attempted evictions and firing in Siwal in 2019, adivasi activists campaigning for legal rights and other adivasis have been locked up in range offices, handcuffed to the window and beaten all night, kidnapped from their fields and beaten with pipes etc. Routinely, adivasis are arrested on ridiculously false charges, as under non-bailable sections applicable to corporate entities under the Bio-Diversity Act, or stringent wildlife protection laws.

Apathy and deliberate delay in recognition of claims under the FRA:

All this is happening despite the Forest Rights Act, which provides for a 3-tier verification process centered on the Gram Sabha and directs that there will be no eviction until claims are settled. Without following the procedure required by law almost 3.6 lakh claims had been rejected in Madhya Pradesh by 2019. When this was brought up in the Supreme Court, the MP government conceded that there were many irregularities in the rejections and announced that rejected claims would be re-verified. However, in the majority of villages, including Negaon-Jamniya, this verification of claims has not even begun. According to a recent list, since the re–verification process was initiated, 4,50,899 claims have been filed, of which the 3-tier process has been completed only in the case of 59,920 claims (13%)! Of these, 31,410 (53%) have been rejected. Around 2,416 claims (86%) in Khandwa and 10,827 (99.5%) claims in Burhanpur district are yet to be verified, and are still at the most initial stage. 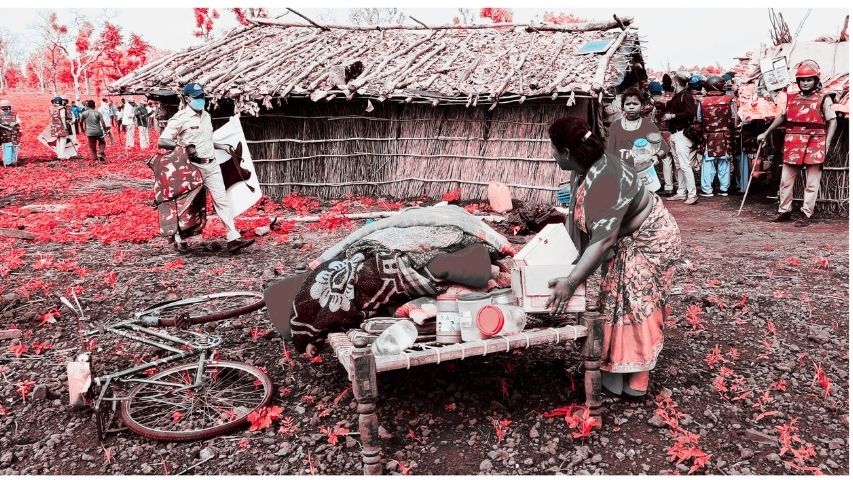 Adivasis attacked in the name of forest conservation while were forests handed over to industry and mega projects.

While Adivasis, threatened with eviction, remain in a state of anxious precariousness, the government while talking of conservation, hands over large swathes of forests to mega projects and industry. In the district of Khandwa, over 47,546 ha. (1,17,439 acres) of forestland has been handed over for megaprojects like big dams and thermal projects alone. More recently, in Madhya Pradesh in just 8 years (2014-2021) over 8433.38 ha of forestland has been diverted for non-forest projects; (Source: MoEFCC parivesh.nic.in). Forests with more than 2.15 lakh trees are proposed for destruction for diamond mining in Buxwaha (Chhatarpur)

In the country, the government has handed over 70,920 hectares (1.75 lakh acres) of forestlands to industry in just five years (2013-18). Between 2003 and 2018, 2,39,572 hectares (5.9 lakh acres) of forestland has been diverted for infrastructure projects. Every year close to 40,000 acres of forestlands are diverted for infrastructure projects. (Status of Forests in India, Report of Department Related Parliamentary Standing Committee on Science & Technology, Environment and Forests, 2019)

Forests for Corporates, violence and eviction for Adivasis:

A recent proposal of the Madhya Pradesh government to hand over almost 40% of the state’s forests to industry for “regeneration” has been stalled only after widespread adivasi protests. Meanwhile in April and June 2021, the Ministry of Environment Forests and Climate Change (MoEFCC) has invited Expressions of Interest from large corporate entities for drafting amendments to the Indian Forest act 1927 to facilitate ‘ease of doing business’ and private profits from forests. Meanwhile, amendments proposed by the Forest officials in 2019 include draconian powers to foresters to raid, seize and destroy adivasi property, arrest and even shoot villagers and revoke their legal rights. After countrywide criticism, these proposed amendments have been put on hold but have not been repudiated.