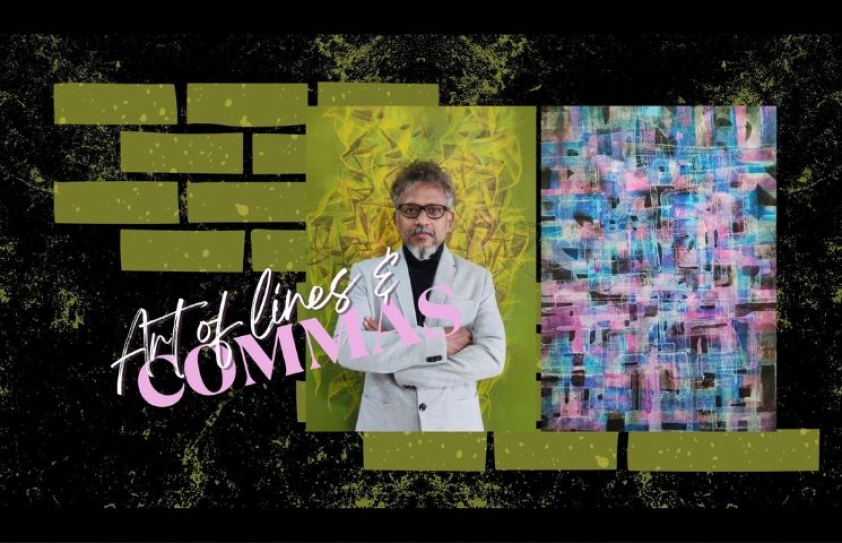 Khalid Mohamed in conversation with Ashok Namdeo Hinge, calligrapher, graphic designer and abstractionist, well-known for the creative use of lines and commas in his multiple award-winning artworks.

Reading between the lines, or creating artworks between the lines, has been the compulsion, or passion if you’d like to call it, of graphic designer and visual artist Ashok Namdeo Hinge. At age 44, he has been feted at exhibitions galore and has snagged an armful of awards in visual arts.

Excessively modest and self-effacing, Hinge has never chosen to blow his own trumpet. When I seek out an interview with him, he travels to my city apartment all the way from his home in Badlapur, a two-hour commute by local train, carrying a tiffin of chaklis baked by his wife. He speaks animatedly about his love for calligraphy in Marathi and then in English, whilst growing up in Vambori village in Ahmednagar district.

The eldest of three children of an electrician, over tea and fruit, he narrates, “My father was too cool. As a kid I could never sit idle, doodling away on whatever sheet of paper I could find. He never discouraged me and was supportive when I chose to graduate with a degree in Applied Arts from Aurangabad even though it did not offer security like, say, a degree in engineering would have. His belief was to give his children freedom. Without that I could never have become an artist.” 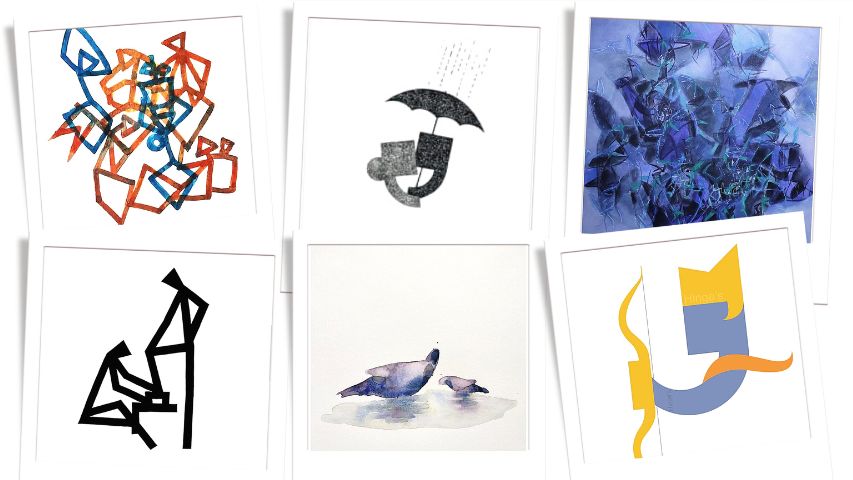 The Hinge family lived in a hutment with a tin roof. Yet the father ensured that his children would decide on a profession after their hearts. In Aurangabad, Ashok would often sketch the sculptures of the Ellora caves, but hurriedly adds, "Nothing erotic. I was interested in the symmetry and harmony of the lines, and had completed an entire portfolio by the time I graduated. My friends would always tell me not to get obsessed with my sketches and instead paint the town red, have some fun, occasionally. I guess they thought I was boring. Only in the last year of college, I agreed to go to a bar with them where they tricked me into drinking rum. I was flying.”

Right so, now that I have Ashok Namdeo Hinge’s backstory, I ask him straight off:

You appear to be quite a moralistic person?

I take that as a compliment. Be honest to others and others will be honest with you, even if it does’t quite happen that way. Mostly, one is taken for granted. Like an incident really shook me up. A close friend said he needed some ornaments desperately for his sister’s marriage and would return it within a week or so. My mother gave him her wedding gold necklace, and the next thing I know is that he had sold it. He did return a part of the money but that was it.

From that day onwards, I understood that money is not the be-all and end-all for an artist but he can be conned. Today, I hope I’m not as naive as I once was. 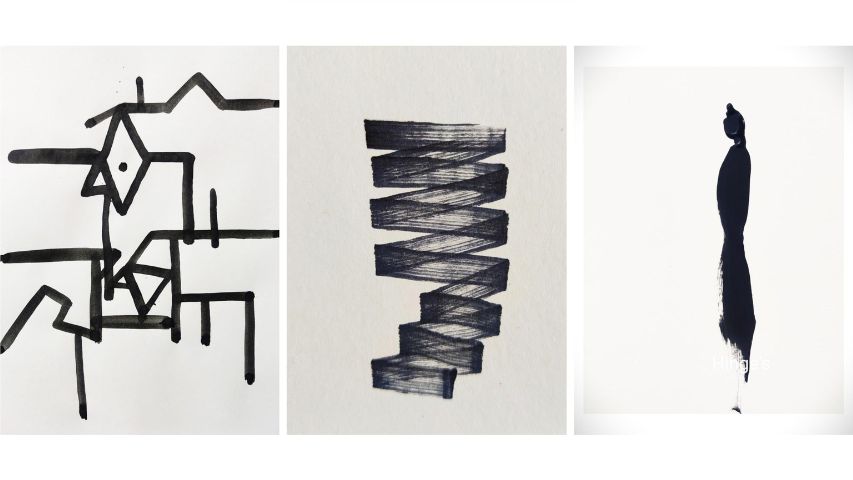 You never do anything wrong?

Sorry but I’ve never had affairs, my wife has  been the first and last love of my life, second to my art. When I was just 21, my father and mother ne mera band bajaa diya. We have two sons; our romance is still as beautiful as ever since the day my wife and I married.

Our family was growing, and I was recommended for a job to pack parcels in Mumbai where I stayed in a small room with four others for a few years. Whenever, we’d get a break, I’d go to the mezzanine floor and sketch away. To save money for the family, I gave up on eating out and would send Rs 2000 to Rs. 3000 home a month. I learnt how to cook myself a meal by the instructions given by my friend.

Then the recession of 2008 hit everyone, and I was forced to resign when I was working in Bangalore. Mercifully, I found a job at the Samsonite luggage company in Mumbai, where I shifted with my wife and child. 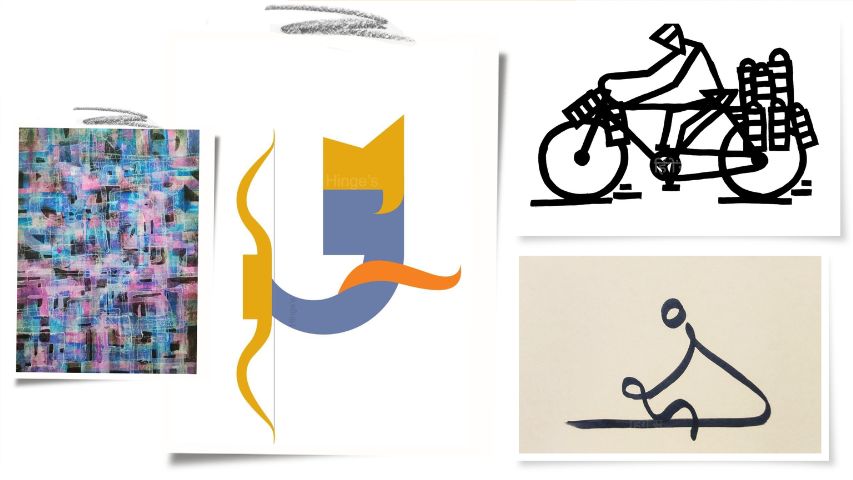 Did this job give you any form of creative satisfaction?

Absolutely. Lines have a life of their own, they are incantations of sensations with emotional layering expressed in strokes, colors and textures. There is an outer line of sensitivity and a composition of optics. This is one of the finest and delicate forms of art. I make what are called ‘commascapes’, a series of minimalistic work - drawing upon day-to-day life, like say a man climbing a ladder, or a coolie carrying a suitcase on his head, or of someone opening an umbrella, like Nargis and Raj Kapoor did in the famous song Pyaar Hua Ikraar Hua in the film Awara.

In fact, the comma is my hero in the visual arts of telling stories. As in writing, the comma is of utmost importance to create an image with a pause. And a question mark can ask for an answer in an image, depending on how the viewer sees or interprets it. God can be seen in a stone, for me I see a higher being in a comma, the space, which is there for me, respite to ruminate.

I was quite thrilled when one of my creations with an exclamation mark and question mark, to signify a guru shishya relationship, which must have been on a digital platform, was used by Mr. Amitabh Bachchan in one of his tweets and Facebook posts. It would have been great if the artist’s name had been acknowledged, but if you zoom in close to the image, you will see my name there in the shadows. 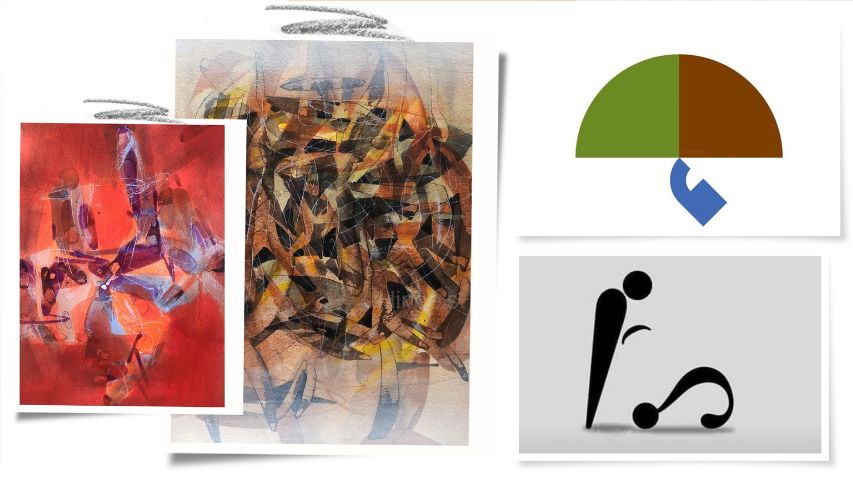 Have you been approached for calligraphy work by any celebrity?

Yes, Saira Banuji’s team had got in touch with me – to write the invitations for the release of her biography on Dilip Kumar saab. I was fortunate to get that assignment and met the great thespian himself. He couldn’t talk much those days but I felt blessed to be in his sheer presence for a few minutes.

How come your work hasn’t been shown in the leading galleries of South Bombay?

See, I am not arrogant enough to refuse even an offer from a small gallery, I’ve done a few shows. As for the top-of-the-line galleries, I haven’t explored that zone. Even if my artworks were rejected by them, I would take that as a learning process.

I feel I still have to reach a 100 percent level of purity. Trouble is I haven’t made enough time to achieve the quality, which would satisfy me completely. Since I have a family to look after, I can’t possibly give up my job at Samsonite, now in Mumbai, where I’ve been for the last 14 years.

I’m okay even if the Badlapur Art Gallery shows my work. Yes, Badlapur has a wonderful art gallery. It’s only because of the Sriram Raghavan movie that the area has been identified with crime and sleaze.

In addition, the awards I’ve received have been a tremendous impetus. These have been the Art Society of India’s best exhibit, The Sir Hirji Jehangir award for modern painting, the Karmayog award for best entry on a social cause or issue, the Prafulla Dahanukar Merit Certificate award, the Afaqs Foxglove award for Elixir Designs - Gold for Living Lines, and several others. So, I have no reason to push myself to the South Bombay galleries. 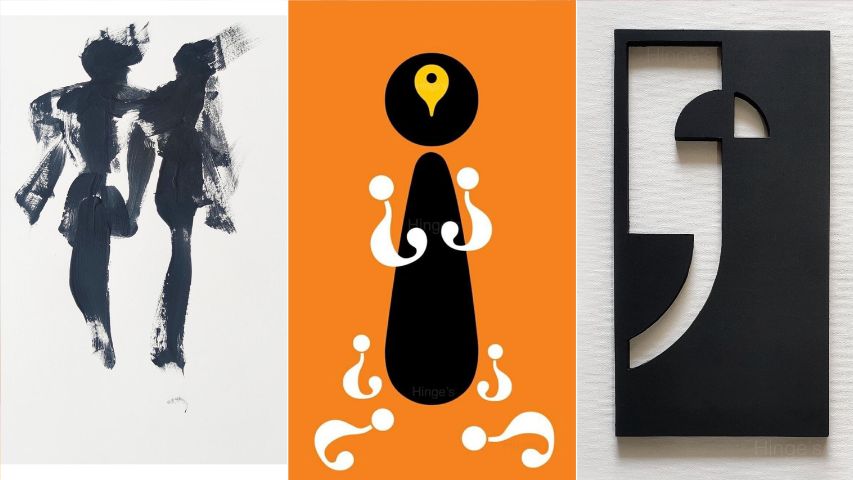 Which artists have been your influences?

Robert Motherwell whose artworks are in black ink essentially and the strong bold strokes of M.F. Husain. I also venerate the abstracts of V.S.Gaitonde and as much if not more than Prakash Waghmare whose criticism I cherish. Like once he told me that my abstracts were derivative of Jackson Pollock whose canvases are so filled with colors that there’s no space to breathe for the viewer.

Abstracts are usually considered pseudo and incomprehensible by the lay viewer.

Yes, it’s often said, “Oh even a child could have used a mess of lines and colors to make an abstract.” Which is fine. An artist must have some of a child’s innocence and purity. Abstracts are the most complex of art forms, it can never be repeated or replicated again.

So, what’s next step in your evolution?

I wish I knew. As long as I have my lines and commas, pens and pencils, acrylics and oils with me, I hope I will reach something close to perfection. Art has no limits, no obstacles. As long as I can remember that as a child, I was obsessed with lines. And I hope to continue and retain that innocence within me.