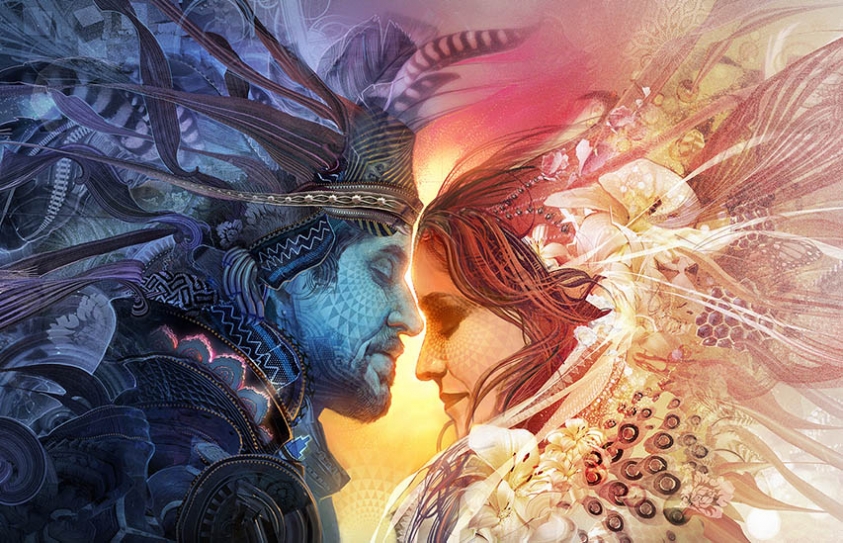 Man’s contempt for that which he cannot understand is well documented throughout recorded history. Witch hunts, crusades, holy wars, inquisitions, imperialism and civil injustices stand testament to the marginalization of the deviant: he who does not conform. A gust that flitters the pages of history books does not only displace dust, but reveals the crimson soaked pages of intolerance. A curator and custodian of knowledge, man instinctively strives to categorize all that he is witness to, and in doing so is able to put the ego at ease. However, the inexplicable is peculiar; in that it displaces the ego. Fear of the unknown beckons the existential dread that comes with a realization of insignificance; a feeling of powerlessness over the behemoth of unfathomable mystery. The unknown suspends the comfort that the volatile ego harvests; and solace can only be found in resigning the insecure ego and in the pursuit of answers from the higher self.

Such has been the case with man’s most intimate identities: gender and sexuality. To even delve into and dismantle these very concepts causes much distress, disorientation and disconcertion to many. First, to tackle gender we must understand where the concept emerges from and how it has evolved. In most people’s minds, gender has become conflated with the scientific concept of sex: a binary categorization of a species in the study of reproduction. From a scientific conception, the term gender became thrust into the realm of sociology, each coming with a set of roles and responsibilities defined by society’s perception of each gender’s merits and flaws, thus further convoluting the concept. Gender was now not merely a biological concept, but one that defined identity. Roles were delineated and those who did not conform were shunned, mocked and/or outcast; and victimized by religious and moral persecution.

The turbulent and intolerant past however gave way to civil rights revolutions and social renaissances. Those oppressed and disillusioned by society’s definitions of gender and their roles had a newfound voice to question these constructs. Some chose to disrupt the status quo by manifesting their own confusion on the concept, birthing transgender, self-stylizing themselves to the gender they feel comfortable in. Others have taken up intellectual discourse and activism as avenues to elucidate the complexity of a wide concept shackled and perceived in a cage of duality. Traditional gender roles are slowly becoming obsolete, as jumps in civil rights and feminism are liberating minds, suggesting a glimmer of hope for a more tolerant collective consciousness.

Sexuality, like gender has been equally traumatized by man’s myopic need for a code of conformity, thus resigned once again to dualism. Strict social codes of conduct illustrated by religion and morality fail excruciatingly at accommodating the complexity of sexuality. Although sex plays a biological function, sexual psychology as elaborated by psychiatrists such as Freud; is largely determined by one’s environment. This suggests that sexuality is not binary, but rather a spectrum that accommodates many deviations. Even in the erudite sphere of today’s world, the only acknowledged deviation from traditional sexuality is homosexuality. Pansexuality, asexuality and others fail to register on any radar. In reality sexuality comes in many shades of grey (please note this is not a reference to the terrible book and film Fifty Shades of Grey). Our own media constantly fetishizes images and objects. These garner sexual responses of desire thus making the case that even those who find themselves traditionally heterosexual will find inconsistencies in their own identities if they really deep dive into the intricacies of attraction. Words, ideas, images, objects, sounds, textures, pain, dominance and submission are all deeply entrenched in most sexual psyches, whether we choose to accept it or not. Traditional heterosexuality is also trapped within the constraints of monogamy. Society has dictated for time immemorial that one’s spouse or significant other to a certain degree is an object of possession. It is absurd that growing up we are taught to deal with jealousy of others around us; however, sexual jealousy is completely taboo. This has handicapped us to be forced into a system that is beginning to show signs that it is more and more unnatural given the exponentially rising divorce rates compared to increased freedom of thought and expression. Polyamory is still far behind the rest of the discourse of sexuality, as our cousins, the bonobos scoff at us as they share partners, food and habitat devoid of major conflict.

Historically, times of social change foster sexual liberation and the explorations of pleasure. The guilt associated with the previous conservative perspective has been shed and this liberation catalyzes innovation, pushing social envelopes and evolving as a species. It is however short lived, as man tends to fall back into his comfort zone. He allows himself to simplify these concepts, to find comfort in a social construct and security in his ego. He wishes to find acceptance in the collective and subdues his natural tendencies, neglecting his own actualization through self-acceptance.

The media has always been a mirror for society, and although the mainstream’s trivialization and antagonization is reflective of the mass sentiment towards the aforementioned issues; cultural movements in the form of film, music, art and intelligent discourse for LGBTQ issues as well as a pluralistic society. As our species slowly evolves however, it will be captivating to observe the shift manifest through media and culture, as our species sheds our juvenile attachments to our egos and we transcend to higher levels of society.