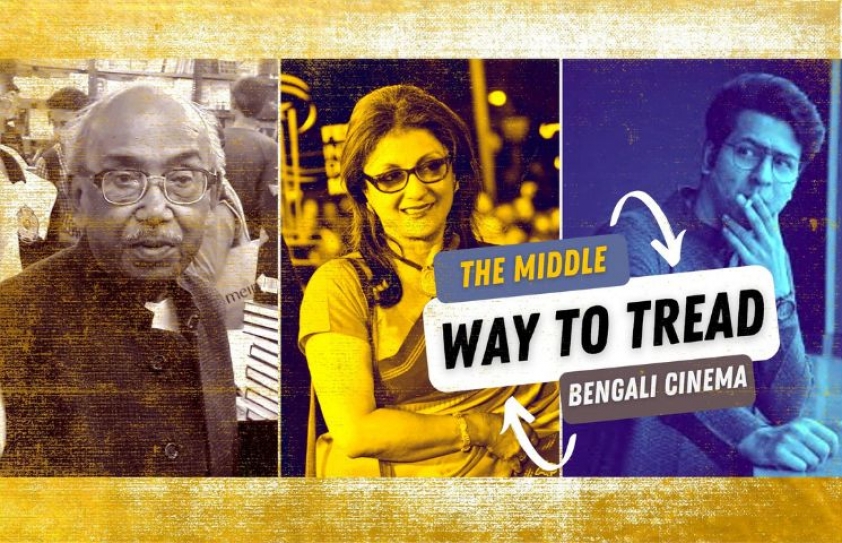 Satyabrata Ghosh explores the cinema of West Bengal to conclude how the median between art and commerce exists and has been often achieved despite the many digressions over time.

Years back, probably in the summer of 1989, the actor Rabi Ghosh in a lively chat with me, referred to Charlie Chaplin as he explained how cinema is a successful marriage of art and commerce. I, an intern turned assistant director then, and a regular visitor at Nandan – the newly built film center in Calcutta (not Kolkata yet) was in awe of sitting in front of the actor and actually, was reluctant to agree with him.

With limited exposure to world cinema till then, I was growing to think that there must be a median between those two poles – art on one end and commerce on the other. Such an idea was also reinforced by the National Film Development Corporation (NFDC)’s hyper-activity in producing films of veterans as well as of young ones and publishing ‘Cinema in India’ – a well-meant magazine to promote good cinema. As luck would have it, Nandan was the only known place where those films, the most talked about films, were screened. And they did make a deep impression that cinema offered a window for new expressions irrespective of its commercial feasibility. It still does.

In West Bengal under the Left rule, cinema was discovered once again. This time to propagate the vision of Indian Marxism, they invited Shyam Benegal, who made Arohan (1982) on the plight of peasants and the assertions of their rights. The state Ministry of Information and Broadcasting formed West Bengal Film Development Corporation in 1983. Save Kony (1984) by Saroj Dey based on Moti Nandy’s novel of the same name, not a single film stood the audience’s patience and the test of time. The friends of the ruling Left parties, some of whom had been to theatres, were invited and they churned out some of the most vacuous content in terms of both aesthetics and craft. No one cared, simply because making cinema gave these ‘makers’ a legitimate chance to make some easy money, while the state was happy to reciprocate their loyalty to the party by dishing out enough money and social upliftment to them.

This was the worst phase of Bengali cinema when mistrust began to grow between the private producers and young filmmakers. On one hand, a huge load of decaying and unopened celluloid cans, which were government property, bore testimonies of ineptness in delivering alternative content. The charisma that the name Uttam Kumar is associated with, was lacking since the beginning of the 1980s. Before his premature demise, the ‘Mahanayak’ as he is prefixed today, was said to be one of the bitter critics of aspirant filmmakers who used to frequent Tollygunge at that time, the local filmmaking hub. As the saying goes, he wished to stand at the road junction to enter the film studios and drive the ‘good for nothing fellows’ personally with a bamboo stick! 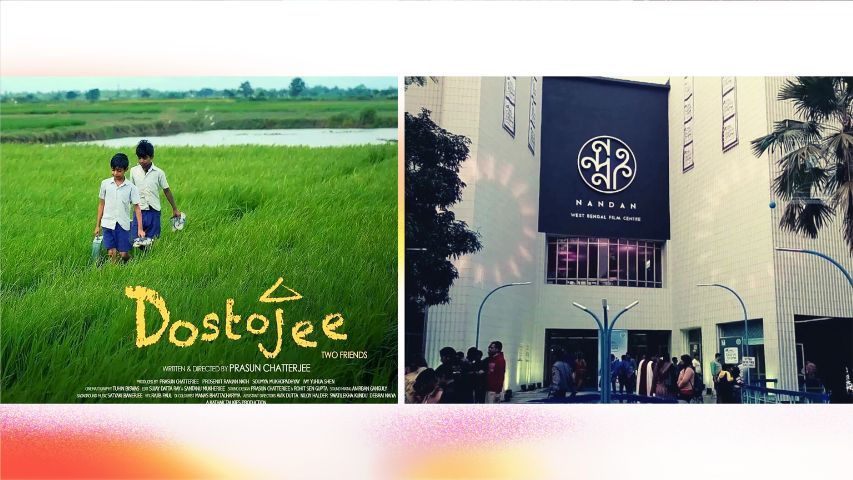 After he was gone, the technicians as well as well-wishers of Tollygunge took a sigh of relief when Tarun Majumdar’s Dadar Kirti (1980) attracted people of all ages both in cities and suburbs. Aparna Sen, the actor debuted as a writer-director amid this mess and fuelled the hope of drawing a middle line between art and commerce with her poetic 36 Chowringhee Lane (1981). But otherwise, the relief was temporary, as Tarun Majumdar and other veteran filmmakers went into their respective loops and mostly upset the expectations of the audience. To top it all, the ghastly processed colour films married with foggy optical negatives at Rupayan, the government-run film laboratory, turned the pleasure of watching vernacular films into pain.

Making film then becomes an effective way to legitimize the surplus money of men running shoddy businesses and a quicker means for lesser than mediocre and wicked lots who called themselves ‘filmmakers’. The episode had a rerun in the new millennium when chit-fund companies like Sharada and Rose Valley fell in love with big and small screens.

The film critic turned filmmaker Anjan Choudhury however surprised the local audience with his Shatru (1984), originally conceptualised by the late actor Subhendu Chatterjee as ‘Hobo Itihas’. With the death of Uttam Kumar, the project was shelved and revived by Anjan Choudhury casting Ranjit Mallik as the protagonist.

With some commitment to the local film industry he was attached to, he continued to write, direct, and produce sentimental, musical and so-called ‘action movies', some of which were liked by the audience who’d not mind paying for ‘entertainment’ in cinema halls. More importantly, he mentored his assistants like Haranath Chakroborty, Babloo Samaddar et al to continue churning film after film, following his style of sentimental overdoses and songs. However, besides Anjan Choudhury and his team the unprecedented rise of Swapan Saha, an entrepreneur turned film craftsman became prominent because of his uncanny way of canning scenes of 4 films in 1 shift at a single set with the same actors! He was also the one who knew how to juggle actors regularly to and from Orissa and Bangladesh.

While the assembly line of filmmaking in Tollygunge remained busy, Biresh Chatterjee, once an assistant director of Hrishikesh Mukherjee, made Neelimay Nil (1991) based on Narayan Sanyal’s novel and Prabhat Roy, assistant director of Shakti Samanta, made Swet Patharer Thala (1992) based on a novel by Bani Basu. These two films revived the value of literature with which the general Bengali audience still associated cinema with boi (book) as a much criticised as well as eulogised tradition. But the rot was too deep, even for Rituporno Ghosh with his finesse and advertising skills to garner a qualitative change in the commercial realm of filmmaking in West Bengal. 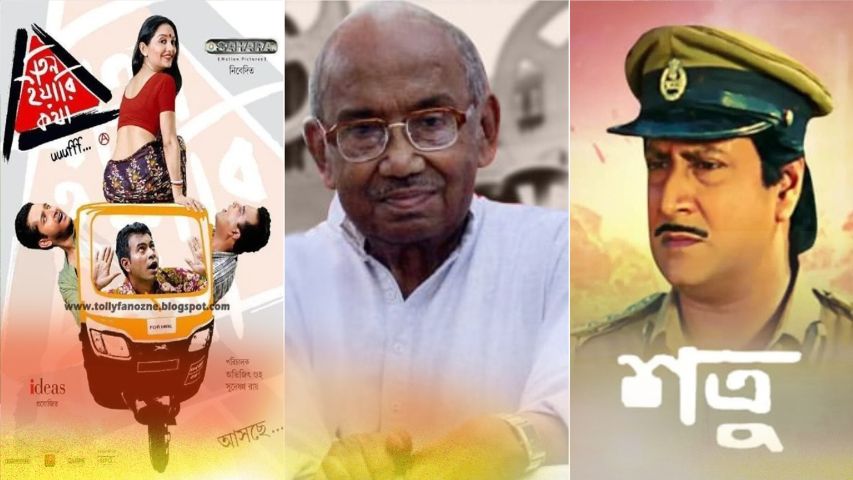 Worse, his signature in chamber drama became a template for some upcoming but less talented filmmakers, which caused further mistrust in people willing to invest in Bengali films. And even worse, many young filmmakers were compelled to dupe the hit films from the South India scene-to-scene in Bengali for distributors-producers who were keen to ensure some profits for their investments. And the rot became deeper still when the daily soap operas began to take away the vestiges of creative energy among a large number of directors, technicians and artists.

Yet, the hope of a middle path remains alive. There are at least four instances apart from Anirban Bhattacharya’s Ballavpurer Rupkotha (2022), where the filmmakers put themselves firmly to bring into the screen what they have visualised and scripted. The first one is Teen Yaari Kotha (2012) in which the lives of three young men with different sets of values cohabit, sulk, crave, rejoice, fantasise and bind in empathy following the tragic outcome of a couple. The serio-comic film directed by Sudeshna Roy and Avijit Guha never seemed to be old from a personal point of view. It deserves to have a sequel with the same artists who have aged, and I imagine them to be bound emotionally even if they now may have separate places to live and raise their own families.

Asha Jaoar Majhe (2014) stunned us with its silence in which Aditya Vikram Sengupta tells the tale of an ordinary middle-class young married couple who only meets and conveys intimacy day to day to each other when one goes out of their home to work and the other comes back. Loneliness looms on their nights and days when fantasies reign. The deft direction with distinguished aesthetics surely has lent a new standard of excellence and reason to rejoice for cinema as an artistic expression.

Manas Mukul Pal amazes us with his simple and poignant Sahaj Paather Goppo (2016). He has woven a tale of innocence dealing with two kid brothers who have to come to terms with a caste-ridden and class-conscious rural society from a well-known story of Bibhutibhushan Bandyopadhyay.

Last, but not least to cite as an example glowing the screen is Dostojee (2021), which narrates the story of two kids residing at a border village in Nadiya during the 1992 inter-religious rift. What impressed the audience is how Prasun Chatterjee, the director, uses the medium of cinema to bring out the essence of friendship, which transcends the barriers of religion, politics and even death to such a depth that it keeps moving the audience right now both in single screens and multiplexes.

Rabi Ghosh, after all, might have amended himself to say that film is rather an alliance between art and commerce, in which money leverages art to express itself in the form envisioned by the talented filmmakers. But then, he left his place long back to a world unknown. Surely, he would have been a happier soul to know that there remains a middle path to tread as far as Bengali cinema is concerned.