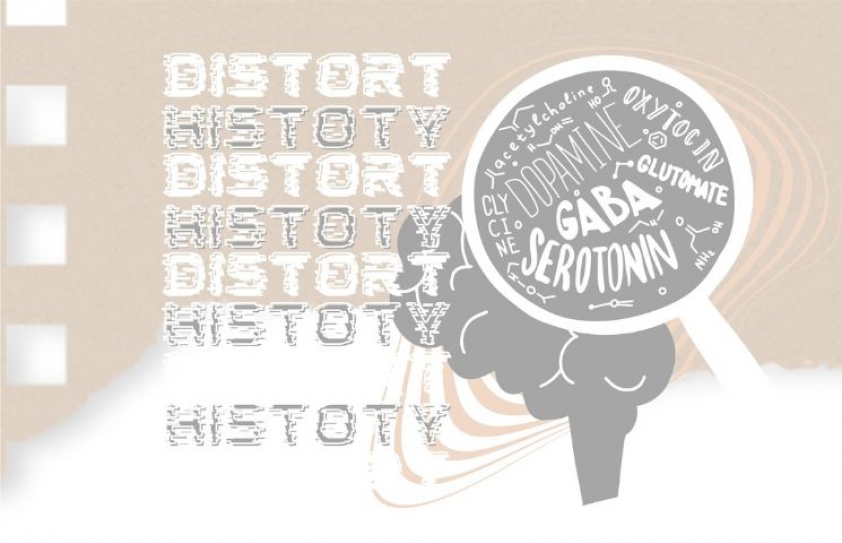 Humra Quraishi comments about the distortion of Indian History and the caste, class and religious divides it seeks to indulge.

It was shocking to see Bollywood actor Akshay Kumar giving the country gyaan on Indian History. But then as I’ve written earlier too, nothing really shocks me anymore in these fascist times. Yes it does get worrying, in the context  of our school and college students and also the university level researchers and scholars. What historical facts and for that matter the socio-economic-cultural truth is being taught to them today?

As news reports come in that perhaps the present administrators in Karnataka are set to bring changes in the text books, one feels a sense of dismay. In recent years, there have been massive efforts by the vested political interests to distort if not delete entire chapters.

Around 2016, reports had also appeared of the previous Rajasthan government’s plan to remove from the text books a particular chapter on Pandit Jawaharlal Nehru. Why? Why should this generation or future generations be deprived of knowledge about a statesman like Nehru? After all, Panditji, as Jawaharlal Nehru was popularly called, stood for democratic values, for the rights and dignity of the minorities and the disadvantaged. Communal attacks did take place in those years, but they were controlled and there was a guarantee that justice would prevail.

Nehru was looked upon as a saviour. A sense of security was felt because he was secular. I’m certain that if Nehru was around, it would have been impossible for the Right-Wing brigades to destroy the Babri Masjid or for the Gujarat and Delhi pogroms to have taken place – perhaps even for the Hindutva ideology to be running the government of India. Fact is that Nehru was a leader of the masses. He was respected and loved in India, and worldwide.

While the BJP ran the Rajasthan government, news reports had stated that students in Rajasthan were to be taught incorrect history: that Maharana Pratap defeated the army of Mughal Emperor Akbar in the Battle of Haldighati some 450 years ago is factually and historically incorrect. To quote historians: “Historical evidence shows that Maharana Pratap, ruler of the Mewar region, had fled the battlefield, although in the later years he continued his guerilla war against the Mughals.”

Also,  the government in Rajasthan then had even changed the name of the Ajmer Fort from Akbar Ka Qila to 'Ajmer ka Qila and Sangrahalaya'. No expert committee of historians and academics was involved in this decision making. Just by the order of the Rajasthan education minister, Vasudev Devnani, the name of this historical fort was changed. This fort built by Emperor Akbar in 1570 was left untouched during the rule of the Rathors, Marathas and the British. The original name of the Ajmer Fort was legally sanctioned by a Gazette notification in December, 1968. It was named as ‘Akbar ka Qila’ or ‘Daulat Khana’ and this name continued till, of course, Right-Wing took centrestage. 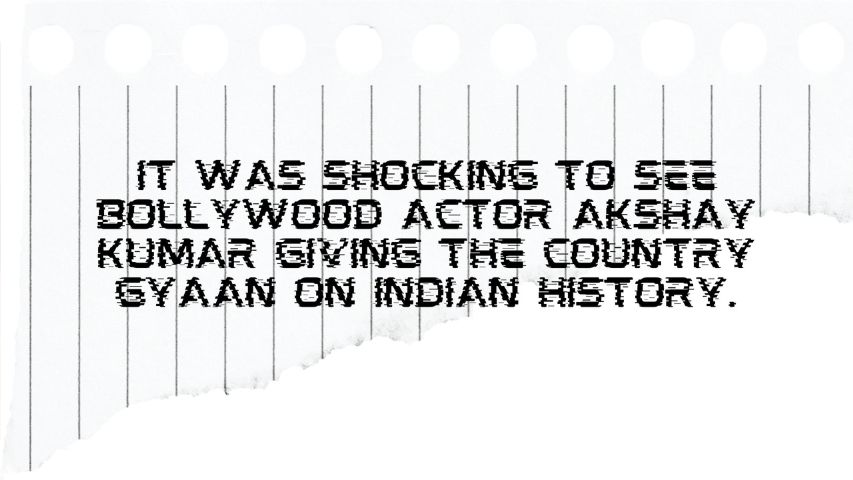 And chief minister of Uttar Pradesh, Yogi Adityanath’s aversion for the Mughals and the monumental wonders they had built was apparent when the annual budget for 2017-2018 made no mention of the Taj Mahal in the section ‘Hamari Sanskritik Virasat’ (Our Cultural Heritage) in the finance minister’s 63-page speech. Also not to be overlooked is the fact that the Taj Mahal is one of the seven wonders of the world. It is a UNESCO world heritage site that draws thousands of tourists and earns revenue for the government.

The Maharashtra government under the earlier BJP rule had almost deleted the names of Muslim rulers from its history text books. Plans had been made to omit, from the text books, vital details about the Delhi Sultanate and the Suri Empire in India without taking into account that without those, the history of India would be riddled with gaps. As a commentator put it,  “Without  focus on the Bijapur Sultanate, Aurangzeb's rise to power over other contenders to the throne, and the invasion by Ahmed Shah Durani, cannot be put in the historical context. Also, one cannot bypass other vital historical facts like these: In the third battle of Panipat, where the Marathas were defeated by the Durrani Empire of Afghanistan, the Marathas sided with Shah Alam II (Shah Alam II was only a puppet under the Marathas) and then led an army to punish the Afghans for their atrocities in 1772. They attacked the fort of Pathargarh and forced the Rohilla Afghans to pay a huge war indemnity. Muslim rulers hold out much in terms of the historical past. And it would be a folly if not unethical to cut, omit, trim or distort historical facts.”

And the RSS’s intrusion into the education sphere was obvious when the RSS-affiliated Shiksha Sanskriti Utthan Nyas, headed by Dina Nath Batra, sent a list of recommendations to the National Council of Educational Research and Training (NCERT), demanding a host of changes in its textbooks. Batra asked the NCERT to remove English, Urdu, and Arabic words, a poem by the revolutionary poet Pash and a couplet by Mirza Ghalib, the thoughts of Rabindranath Tagore, extracts from painter MF Husain’s autobiography.

Batra had also wanted references to the Mughal Emperors as “benevolent”, the BJP as a “Hindu” party, the National Conference as “secular”, an apology tendered by former prime minister Manmohan Singh over the 1984 riots, and a sentence that “nearly 2,000 Muslims were killed in Gujarat in 2002”  to be  all removed!

News reports also stated that NCERT objected to the following facts: The Class 11 political science textbook mentions “the massive majority of Congress in 1984” but “does not present the 1977 election details”. Also, the Class 12 political science textbook terms “National Conference of J&K a secular organization”, and the English textbook of Std X places “nationalism against other ideals” as “an attempt has been made to show a rift between nationality and humanity by citing thoughts of Rabindranath Tagore”. It also wanted the Hindi textbooks to mention that the medieval Sufi mystic Amir Khusrau “increased the rift between Hindus and Muslims.” 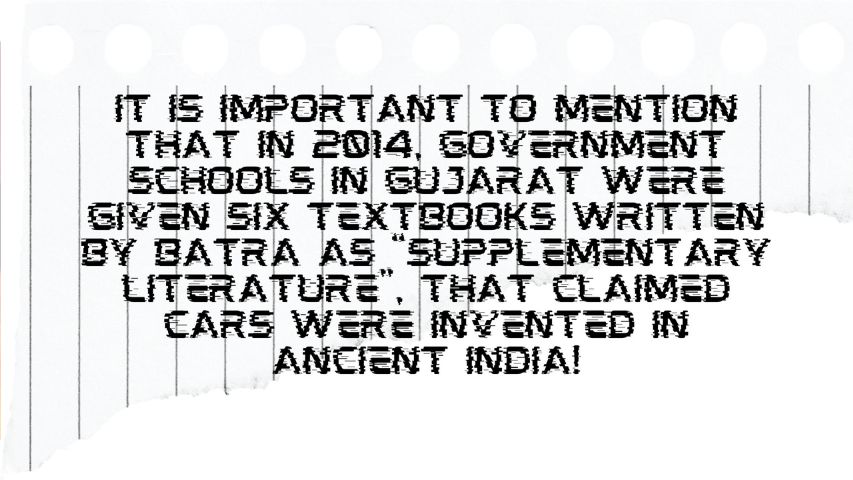 NCERT had on earlier occasions demanded the removal of AK Ramanujan’s essay, ‘Three Hundred Ramayanas: Five Examples and Three Thoughts on Translation’, from the undergraduate syllabus of the University of Delhi. It also went to court demanding Wendy Doniger’s book, The Hindus, not be sold in India. Mind you, those demands were fulfilled. Ramanujan’s essay was removed from the University of Delhi’s reading list. And Penguin India, the publisher of Doniger’s book, pulled it from circulation.

It is important to mention that in 2014, government schools in Gujarat were given six textbooks written by Batra as “supplementary literature”, that claimed cars were invented in ancient India! Also, school children were told to draw an ‘enlarged nation’, which would include the neighboring countries, Pakistan, Bangladesh and Afghanistan.

It also must be noted that the meaning of particular words like ‘Roza’ (Muslims’ observe Roza or fast during the holy month of Ramadan), published in textbooks taught in Gujarat schools were distorted. And in 2017, the ICSE board’s class VI text book ‘blamed’ mosques and Azan for causing noise pollution! A chapter on noise pollution, in the textbook published by Selina Publishers, focused on the sources that cause noise pollution. Besides images of trains, cars, planes as the usual or regular sources of noise pollution, there was also an image of a man shutting his ears in frustration in front of a mosque!

Years ago when I’d first heard academic Nalini Taneja talk, in an open forum in New Delhi, about what’s taught in the RSS run schools. The details were shocking. She read passages from the text taught in the RSS run schools and commented that the history taught in these schools are nothing but an  unadulterated version of the RSS view of India’s past and its ‘use’ for its sectarian agenda. Some examples are: Aryans are the  original inhabitants of  India, Indian civilization is essentially Aryan civilization, the ancient  period  of  history when Hindu rulers ruled was golden and India had enormous advantages during this period. Also that the coming of the Mughals brought along darkness and cruelty, Hedgewar, Golwalkar, Savarkar are among the greatest freedom fighters, Muslims as a community are traitors and Hinduism is synonymous with nationalism. While Caste, child marriages and sati are defended, Muslims, Christians and Parsis are called foreigners. And, Urdu is referred to as a foreign language.

In 2016, during an interview given to me, the former IIT Mumbai academic turned activist-author Professor Ram Puniyani spoke about the teachings in the RSS run schools. He said, “RSS has single teacher schools called Ekal Vidyalaya and bigger schools like Shishu Mandirs. The pattern of authoritarianism between teachers-taught, senior-junior is very rigid. The main values, which are promoted are those of conformism. Along with this, the books in these schools are structured around the mythical history of superiority of Hinduism - that all was well with the Hindus till Muslim aggressors came, caste is presented as having given stability to society, Muslim Kings are presented as cruel and so on. The hatred for religious minorities is drilled into the children.”

And the former Vice Chancellor of the Lucknow University, Roop Rekha Verma, minced no words whilst talking about the communal “happenings” in the  academic institutions in Uttar Pradesh: “Besides the text books, the manner in which teachers talk against the Dalits and Muslims in classrooms is just too shocking!”