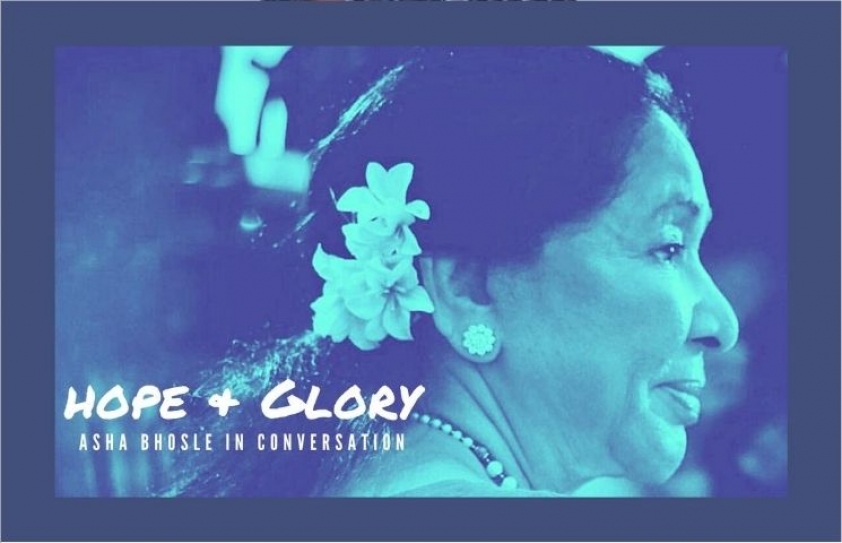 Khalid Mohamed talks to the legendary Asha Bhosle this week, about her talent hunt for singers on her YouTube channel, and her undiminished lust for life and music.

The rolling months of stay-at-home to avoid the cursed COVID-19 wouldn’t have been possible without her. Loneliness, aloneness, isolation; call it what you will, it does strike hard. And then it’s her peppy, multi-vitamin voice which comes to the rescue.

At least for me (and I suspect countless others), Asha Bhosle’s immense repertoire of songs are sweet; saucy relief.

So I the eternal fan-man, was beaming ear-to-ear, when the Big B became accessible on YouTube with the channel Moments in Time (recalling vignettes of how some of her chart-smashers were recorded), plus Asha ki Asha/Asha Bhosle Talent Hunt on her official website. The latter is a shout-out to aspiring singers to upload a 2-minute video of his or her singing talent, and get a chance to win Rs 1 lakh.

At 86, Asha Bhosle has lost none of her joie de vivre and undiminished lust for music. That is a given. And that’s so Dolby-clear when I called her up a couple of days ago at her Lonavala bungalow, where she has been ensconced with her family since the last four months.

Her voice over the phone is steel-strong as ever and so is her instinct to respond right away, no pauses, no off-the-record requests. Bonus: to make my day special she even crooned one of her vintage little-known tracks for me (if that gave me goose-bumps, I’m not at all surprised).

Admittedly, this is a wide-eyed, mood-boosting interview for me. Whether I did it right or wrong, I don’t care. Without much more ado-dah, here are the choice excerpts: 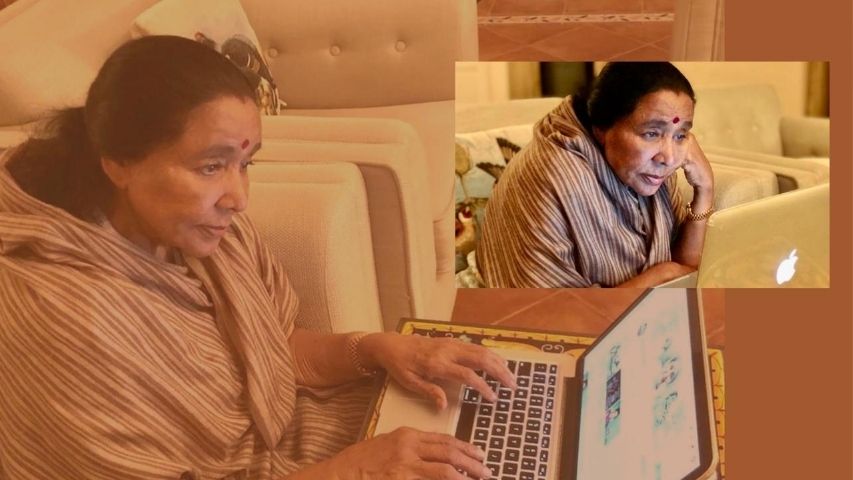 Ashaji, I’ve been surviving the strange times we’re going through, thanks to your songs – whether the fast-tempo or the melancholic ones.

Really? I guess there’s been no news on the TV channels and newspapers, except the highly disturbing ones. We have to still reconcile to the tragic passing away of Sushant Singh Rajput, understand the reports, which seem to have so many twists and turns. It hurts deeply to see a gifted, young actor to go away so soon. Perhaps for diversion, people like you are turning to music; and when you mention my songs, I’m flattered.

I’ve  been away from Mumbai, except for one brief visit. I’m here in my little bungalow, it’s in a spic-and-span area, every day a flock of chirruping birds keep us company. I’ve just finished rustling up the lunch: fish, koftas and Sindhi curry. I love cooking but that’s not enough to keep me busy. I was being persuaded by my family, since we can’t go out much, let’s do some recordings on the camera, the new model of the I-phone camera if need be.

And I was inspired to go ahead by watching my granddaughter, Zanai, who has studied in Geneva. One day, I saw her on a Zoom call on her laptop with her friends from America, Britain, the Gulf countries - so many places. They were partying, someone was playing the guitar, another drums, another was dancing; they were singing altogether. Zanai is very fond of Adele, she was crooning one of her numbers, which made me go wow. She’s even made me tech savvy, she’s learnt Kathak, she can sing beautifully, perhaps some day she can take my virasat (legacy) forward.

To come back to the talent hunt, see India is such a vast country. And  one fine day, I began to wonder why there aren’t many more new singers coming up nowadays. I’d thought of launching  a talent hunt since years, now was the time to actually apply my thoughts to practice. 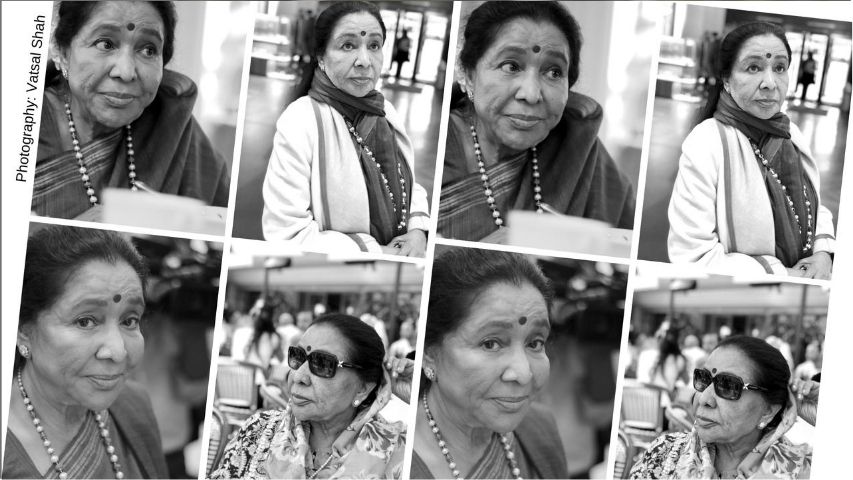 What took you so long to initiate a talent hunt?

The film industry is busy, always busy. There isn’t a minute to spare. At the same time, there are so many talented young people outside the industry who dream about becoming singers but are too apprehensive to display their mettle. Believe me sooner or later, like water, talent finds its own level. Not only singers, but there’s a whole world out there of fresh lyricists and composers who just need an outlet to express themselves.

So far, I’ve received a whole lot of entries, short-listed them to 70 and then to 30. These have come for all over India including Orissa, Bihar, Bengal, Maharashtra, and even from Oman and Italy. Many of them have done cover versions of my songs for some reason, I couldn’t detect any depth of emotion in them. They have the required sur (the key of musical notes) and correct pronunciation. I prefer the entries, which are sung solo instead of the ones done on Karaoke, in which the accompanying music becomes too overpowering. I’d like to suggest just sing, avoid adding music.

Do you expect to monetise this talent hunt in any which way?

Of course not! I don’t want anything, I only want samadhan, a certain kind of satisfaction that I could do something. There were offers to do this sort of programme on television, a sponsored show. But I’m not business-minded, I leave all that to my son Nandu. This talent hunt was done spontaneously by all of us. The rest is up to Nandu.

Of the relatively new lot singers in Hindi cinema, which ones would you single out?

There are so many but I haven’t listened to any of them attentively.

What about Arijit Singh?

Arijit Singh… oh yes, he’s good. Apart from that, I’ve heard so many new singers but most of the time, my ears get tired. I’m searching  for an original voice. The trouble is that even the new generation is accustomed to the yesteryear voices, be it Lata didi’s, Geeta Dutt’s, Shamshad Begum’s or mine, Mohammed Rafi’s, Kishore Kumar’s, Manna Dey’s, Talat Mehmood’s or Mukesh’s. These voices have been stuck in the brains of the upcoming generation. 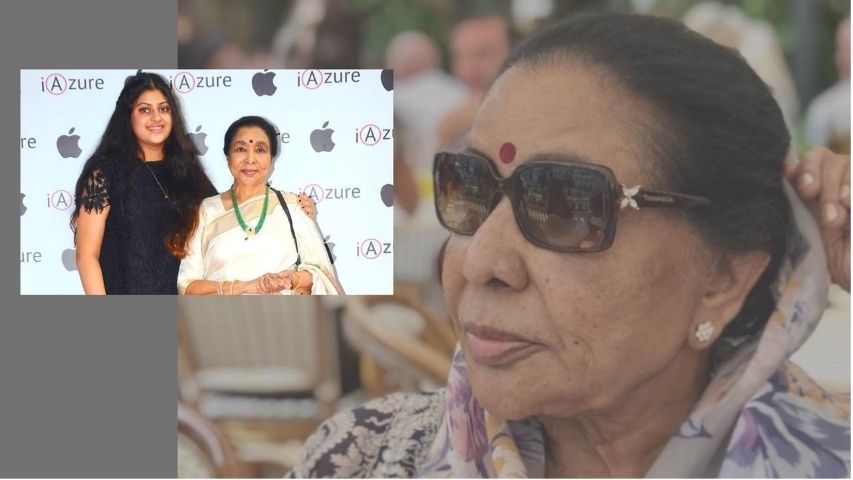 How come you never imitated anyone at the outset of your career?

Ha! Maybe because I didn’t have brains! I sang, and the way I sounded I knew that I should be unlike any of my peers. See, Pancham (R.D.Burman) would always say, let’s find a new sound, a new style, which is why he would take off with a tape-recorder to catch the sound of crickets and birds in a forest. He would even record the sound of trains, how they sounded running on the tracks and halting at a railway station. His belief was, Kuch naya hona chahiye (There must be something new).

How do you explain the fact that millions of people, like myself, still listen to the golden oldies mostly instead of today’s music?

Who am I to explain that? Ask yourself?

Perhaps that’s because the music compositions were purer, possessed that vital element called melody and were catchy. Today’s youth listens to the new tracks but they definitely have a certain regard for the golden oldies as you call them. Like my 18-year-old granddaughter listens to western as well as Marathi music and songs from yesteryear.

She’s a fan of my songs and didi’s (Lata Mangeshkar). The point I’m making is that there are no limits, today’s youth have more access to music and their taste is eclectic.

How come your late son, Hemant Bhosle, gave up as a music composer despite a body of high quality work as in Doosra Kinara, Shradhanjali, Damaad, Anpadh, Taxi Taxie and Jadu Tona?

Although he did compose songs for quite a few films, I guess the competition was very tough for him at a time when Laxmikant-Pyarelal, Shanker-Jaikishen and Bappi Lahiri were on the scene. And as you know he wasn’t keeping well during his end years.

My son, Nandu, wanted to become a singer but I stopped him. He had a sharper sense of handling business matters. And my (late) daughter Varsha had learnt singing and did the playback for quite a few Hindi and Marathi films. But her heart wasn’t into singing, she didn’t take it seriously. She was into writing, and wrote so many articles, she’d always be sitting before a typewriter and then a computer. 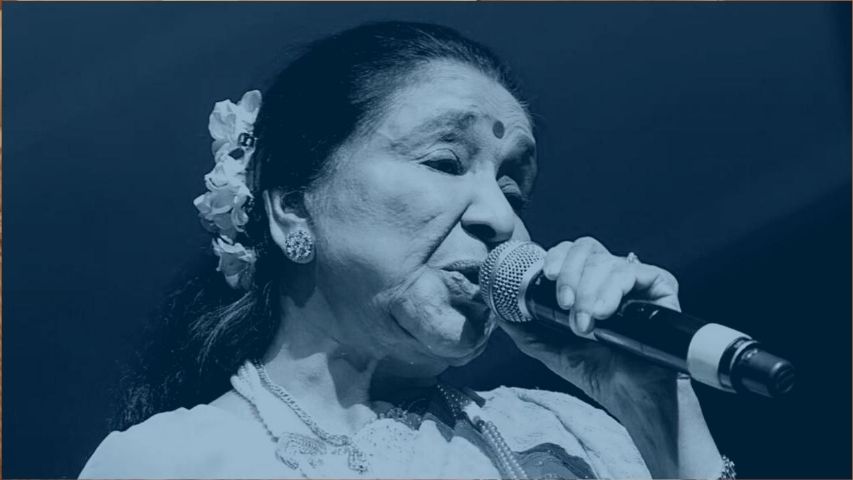 Have  you given up on recording for film songs?

Not at all, I’m open to film songs, they have made me whatever I am today but I should  relate to the kind of material I’m offered. The last two I did were for the film Begum Jaan, and Vishal Bharadwaj’s Saand ki Aankh.

Do you ever get tired of the film recording process, which is  highly technical now?

On the contrary, it’s easier for us singers now. In front of the recording mike, we adapt to the techniques of the day. A  singer can’t change his or her stripes. Like leopards can’t suddenly become lombdis (foxes), can they?

All I can say is, that I want to be busy, busy, busy all the time. Nandu keeps our overseas restaurants running, most of them have re-opened. Frankly, when I perform at a concert at home or abroad, I feel especially fulfilled. The audience sings and dances along and I can see three generations in the hall – my generation, the middle-aged and the youth – which is a big high. And it’s not as if they want only modern numbers. At a concert in Bengal, there was a demand for songs by Salil Chaudhary and S. D. Burman as well as Dum Maaro Dum and Nazar Laagi Raja Tore Bangle Par. And also some rare ones.

(Goose-bumped) How do you keep your voice in shape?

One’s body weakens with age, so do the vocal chords. Mercifully, I’ve maintained my voice with my daily morning riyaaz, at times for a stretch of two hours. When I’m in Mumbai, I even do it at midnight. I thought the neighbours might get disturbed but they assured me that they love listening to me. 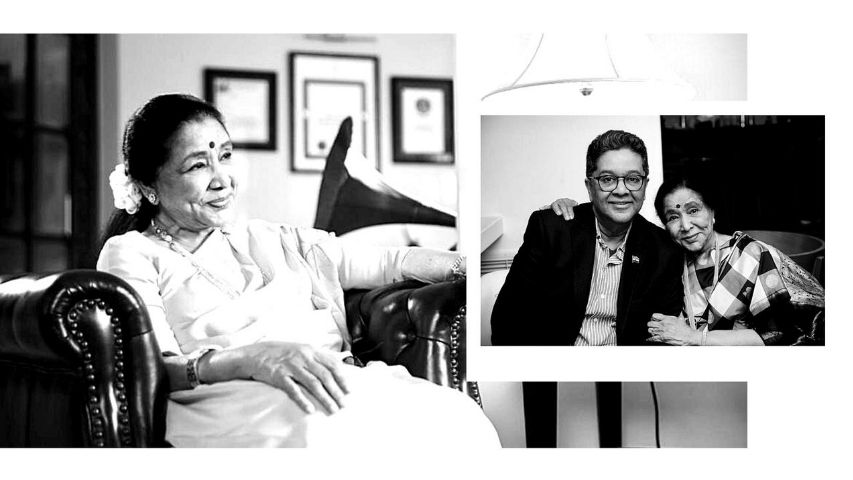 To return to the question – any more desires left?

Oh so many. I wish my songs could reach all over the world, I wish I could have learnt to sing in Italian, Spanish and Arabic. I wish I could have learnt to play the harmonium, the piano… the desires are endless… lekin gaana hi reh gaya (only the singing has remained). Right now, I wish the coronavirus would end… so many lives have been lost. I am not afraid of it though, it’ll go… after all my name is Asha (Hope).

Do you keep in touch with Lata didi?

Always. I may be in any town, but I make sure to call up didi.

Lastly, there will always be the question - who is the best Lata Mangeshkar or Asha Bhosle?

This has been going on for years. What can either one of us do about this? Leave the world? Ha, once Pancham described her as the Don Bradman and me as the Gary Sobers of singing.

Or maybe it’s like this. Of the names of the first two men who walked on the moon, Neil Armstrong is remembered more than that of Buzz Aldrin? So it’s like the song went, Kuch Toh Log Kahenge… Logon Ka Kaam Hai Kehna. Let them. No one’s going to feel the best or second-best by such comparisons.