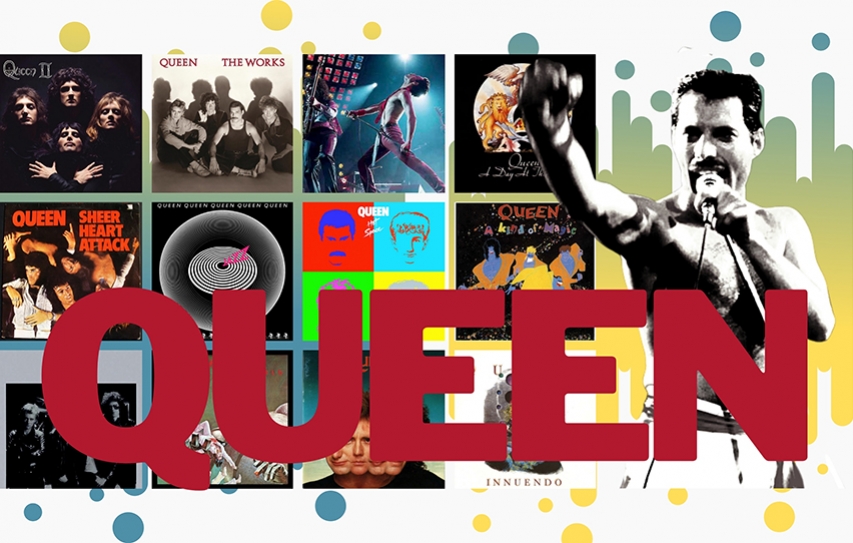 Music buff Niraj Jani, rhapsodizes about the emotional wallop of  the Queen, the 1970s British band which still rocks the playlists of the millennials.

Although Mick Wall’s widely-acclaimed book When Giants Walked the Earth encompasses the forensic analysis of Led Zeppelin, the legendary rock band of the 1960s, I truly believe that Queen are the giants who walked the hearts with their  emotive oeuvre.

While contemporary artistes, Pink Floyd, exerted social commentary, and depicted emotions at a psychological level with a psychedelic effect, Queen had emotions at the core of their works. Or should I say, they had the heart as the pumping instrument in their varied albums?

While Queen is recognised for perpetually experimenting with sound and not sticking to a particular genre, much more credit is due to the band for investing a mélange of emotions in their songs. With all the four members of the band - Freddie Mercury (lead vocals, piano), Brian May (lead guitar, vocals), Roger Taylor (drums, vocals) and John Deacon (bass) - contributing to the lyrics, sometimes together and more often than not individually from a personal space that is deeply felt, Queen came up with songs which impart pure human feelings, which is why the band resonates with their legion of fans even today.

Handpicked from their rich discography, here’s a throwback to the choicest of Queen songs which are eminently listenable, not just for the musical affluence but also for their resonating emotional impact.

Originally co-written by Brian May and Tim Staffell during their stint in Smile the band, Doin’ Alright is a soothing track that underscores hope despite the miasma of uncertainty. The song was recorded during Queen’s infancy and echoes almost child-like optimism ironically rooted in conventional wisdom and not naivety. The emotive riff by Brian May on his Red Special guitar, and Freddie Mercury’s mellifluous vocals make it all the more extraordinary.

From an album to die for, Nevermore - an amazing piano ballad by Freddie - transports the listener from the playful vibes of The Fairy Feller’s Master-Stroke to the realms of a poetic romantic tragedy, before it seamlessly slithers into the epic The March of the Black Queen.

In its run-time of a minute and 18 seconds, Nevermore captures the pangs of unrequited love, heartbreak, and beyond.

This track is often recognised as one of the most experimental ventures of Queen with a wide range of songs such as the orchestral Now I’m Here, Killer Queen and Stone Cold Crazy, which portray their varied musicianship. Amid all the musically vivid songs, Brian May’s piano ballad, Dear Friends, is a welcome change for its density of feeling, which reverberates hope amidst the loss of love and broken dreams.

Featuring as a part of A Night At the Opera, arguably the most famous record by Queen, which was recorded during the golden period of rock music, Bohemian Rhapsody has stood the test of time as a clear winner of heartspeak, compared to other songs in the iconic album. Encapsulating a myriad of emotions rooted in Freddie’s enigmatic yet enchanting life, Bohemian Rhapsody never ceases to confound fans about its contextually complex narrative structure; yet it continues to impart a lasting sensation with its undeniably and palpable fervour.

Apparently, this one was Freddie’s personal favourite, as mentioned in many articles, and opposed by fans that identify Bohemian Rhapsody as meritorious. Somebody to Love divulges a plethora of feelings of a man devoid of love and consumed by the daily struggles of life. The song is rendered rather vehemently by Freddie and features one of the most underrated performances on drums by Roger Taylor. It also has a sing-along chorus at the end, which grows on every re-listen.

Stuck in a corporate job that does not pay well? Pursuing a life that is not aligned with your purpose? If you identify with such internalised dilemmas, then John Deacon’s Spread Your Wings will definitely connect with you.

The song portrays the genius of the underappreciated lyricist John Deacon as it almost outshines the flamboyant compositions like We Will Rock You and We Are the Champions which feature as the first two songs of the album followed by the idiosyncratic Queen number Sheer Heart Attack and the soothing All Dead, All Dead , so characteristic of Brian May’s cool and catchy compositions  and lyrics.

Jealousy is a very common emotion, and among many songs that capture this  feeling, John Lennon’s Jealous Guy being one of them, Freddie’s Jealousy not only explicitly defines it, but also portrays the accompanying collateral emotions of remorse, guilt, and dejection. With its all-pervasive aura created through an amazing composition on piano by Freddie, a subtle intensity without a Queenesque crescendo, Jealousy sucks you in as you find yourself profusely identifying with this classic.

In one of the episodes of In the Studio aired on Radio 1, Brian May shared that he wrote Save Me for a friend who was going through an  “unspeakable” relationship. The song features as the last song of the album and highlights the perils of a toxic relationship while also commenting on the inevitable immortality of love for  one’s beloved, regardless of gender. For an old soul that believes in the perennial pathos of love, loneliness, and everything that romantic tragedies are made of, Save Me is a must-listen. This is one of the rare songs that features Brian May on piano.

Featuring in what I identify as one of the weakest albums by Queen, Under Pressure - the Queen and David Bowie collaboration happens to be an uncontrollably loud and yet impactful song. It is possibly one of the rare Queen songs, which doesn’t impart emotions on the personal front, but rather attempts to philosophise a gamut of emotions at a worldly level. As the song ends with pinches, your soul wakes up to think of love, friendship, empathy among other sentiments which matter to every one of us.

I was in two minds about choosing the philosophically profound Is This the World We Created over Freddie’s fervent It’s a Hard Life, but I would go with the former as the song concises gobs of emotions depicting the perpetual existential gloom and doom of humankind and questions the perilous design of the entire world and its system. Accompanied by soothing riffs on the acoustic guitar by Brian May, Freddie’s almost weepy vocals add to its intensity.

Friendship was a special part of Queen as a group, and the legends often identified themselves as a family - a rarity in the rock groups of that era of intellectual and musical conflicts. Written by John Deacon in collaboration with Freddie, whom he calls his best friend, Friends Will Be Friends starts with an emotive riff and transcends to one of the most poetic lyrics, almost reminiscent of artist Bukowski’s inventive imagery. For all its evocative words, passionate singing, and sing-along atmosphere, this translates into one of the most undervalued of Queen songs.

The Miracle had received flak from most of the critics across the globe for being commercial and not experimental. Regardless, it doesn’t cease to be famous among Queen fans and features a passionate I Want It All that invokes a palpable zeal to achieve big and have the world behind the tail. Self-motivating in its fabric, the song is catchy and makes up for an  awesome sing-along.

Even if the song would have been recorded as an instrumental, Brian May’s  guitar solo was enough to induce a resounding sensation in the hearts of the listeners. In this jewel, Brian May’s Red Special almost weeps in a heart-wrenching agony accompanied by slender but meaningful words, adding to the romantic sentiment of the song, giving way to the expressive  The Show Must Go On, which closes the album.

Credited to Queen the group as agreed by all the members, the song was originally written by Freddie and would go on to become a part of the Made In Heaven album, released four years posthumously after his tragic death in 1991. A Winter’s Tale, with all its lurid imagery and poignant narrative, also depicts a child-like fantasy that transcends you to your childhood. The accompanying Red Special solo by Brian May is equally rich in emotions and complements Freddie’s emotive lyrics. For the lovers of poetry, this song is pure bliss, to say the least.

With hundreds of compositions in their discography, I believe Queen had a song of every facet of emotion. My Life Has Been Saved, written by John Deacon, helps me overcome the unendurable stress and anxiety of the times we are living in. The song has suggestive lyrics, urging the listener to appreciate life, despite the world being in colossal disarray, which makes it a song of hope. Do listen.


Music Niraj Jani Queen British band Playlists Millennials Mick Wall When Giants Walked the Earth Led Zeppelin Rock band Pink Floyd Freddie Mercury Lead vocals Piano Brian May Roger Taylor John Deacon Doin’ Alright Tim Staffell Nevermore The Fairy Feller’s Master-Stroke The March of the Black Queen Sheer Heart Attack (1974) Bohemian Rhapsody A Night at the Opera (1975) Somebody to Love A Day at the Races (1976) Spread Your Wings News of the World (1977) We Will Rock You We Are the Champions Jealousy Jazz (1978) John Lennon Jealous Guy Save Me The Game (1980) Under Pressure Hot Space (1982) Is This the World We Created? The Works (1984) Friends Will Be Friends A Kind of Magic (1986) Bukowski I Want It All The Miracle (1989) Bijou Innuendo (1991) A Winter’s Tale Made In Heaven (1995)