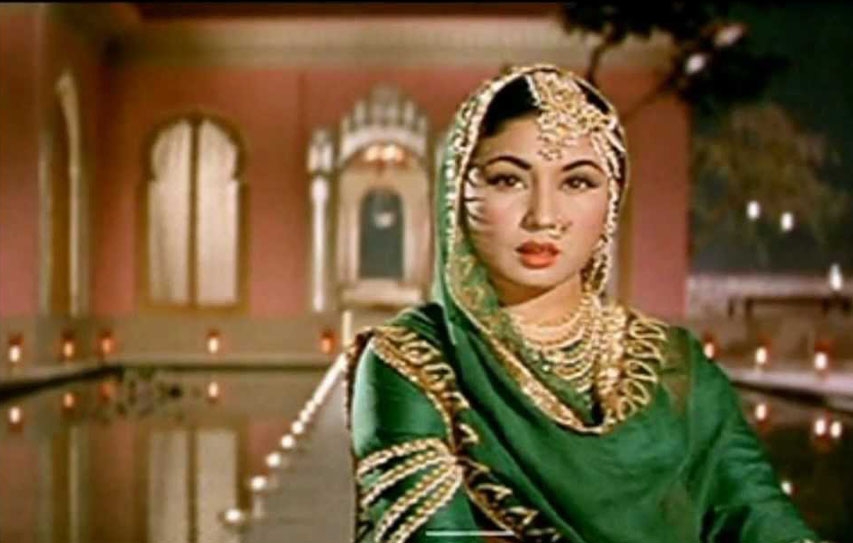 Meena Kumari’s rags to riches saga has a poignant edge to it. Dubbedthe greatest tragedienne of the Indian screen, her doomed personal life flashing with deep tragedy makes for heart-rending reading. Initially the Ali Bux family lived in squalid quarters near a Dadar studio. Father, Ali Bux landed in Bombay from an obscure North Indian province to seek his fortune as an aspiring maestro. Soon enough he met a beautiful Christian Bengali dancer, Prabhabati. But Prabhabati became Iqbal Begum when the two married. Meena Kumariinherited her mother’s Madonna-like features. Her own natural grace and fluted voice provedgreat assets to the parts she portrayed.

The Bux family lived close to Dadar’s Rooptara Film Studios as mentioned earlier. Their three girls played street games just outside the studios walls.Apparently, Ali Bux failed to make it as a musician but a shrewd man, he quickly designed a clever scheme to keep the family from starving. One by one all his three daughters were sent to work in films as child labour. The eldest, Kurshid was the first. Ali Bux sang high praises about his second daughter, Mahajabeen to convince top producers about her acting. The youngest daughter, Lucky Ali’s mother, worked briefly before she eloped to marry comedy actor Mehmood.

The credit for introducing Mahajabeen goes to Director Vijay Bhatt who gave her the debut break in Leather Face (1939). Bhatt infact,played a decisive role in the child star’s destiny. He dropped her long-winded name for the simple Baby Meena, changing it to Meena Kumari by the time he decided to cast her in the greatest musical love story of her career, Baiju Bawra (1952).

For a while Meena Kumari continued to be the popular choice for mythological and Arabian Night fantasies, that was the flavor of Wadia Movietones those days. And before she quit this genre, Meena Kumari received the highest record earnings for an actress, an unbelievable Rs. 10,000 (forWadia’s Aladdin and the Wonderful Lamp – 1952). Few movie actors anywhere in the world have made the seamless transition from a child star to tragedy queen.That Meena Kumari did proves her great range and versatility. The 1950s were formative years in Meena Kumari’s life. She was cast in the female romantic lead in Bhatt’s Baiju Bawra – a phenomenal success story. Though not yet a star, she caught Bimal Roy’sdiscerning eyes to be cast as Lalita in the Sarat Chandra classic Parineeta (with Ashoke Kumar). The film is a gem in Meena Kumari’s rich repertory. Parineeta and Baiju Bawra established her at the peak of the star system.

Meena Kumari grabbed the popular Filmfare magazine award for Best Actress in 1953 and 1954 for both these films. In 1953 she also began work in Zia Sarhady’s offbeat film Footpath butthe film’scommercial failure made no dent in her rapidly rising career. Her personal life was looking good as well. Ali Bux moved to a pleasant bungalow near Bandra’s Mehboob studio around the time Meena Kumari met Kamal Amrohi, the noted writer-director and maker of the hugely successful Bombay Talkies film – Mahal. Kamal Amrohi enjoyed an enviable position in the Bombay film industry. Fifteen years senior to 18-year-old Meena Kumari, he was a married man. Fired by the passion of writing poetry,age or marital status were non-issues to the actress. After a two-year clandestine affair, Meena Kumari married Sayeed Ameen Hyder, better known as Kamal Amrohi.

An incensed Ali Baux declared war on his favourite Mahajabeen. A family truce was called and Meena Kumari promised to support her family. By 1955, her position as a star was utterly secure. Each new achievement brought fresh laurels. Paired with the greatest heroes, for example, Azad (1955) Dilip Kumar, Sharda (1957) Raj Kapoor and Ek Hi Rasta (1956) with newcomer Sunil Dutt, she rose seamlessly to the top. Her restrained low key acting, and glowing screen presence marked Meena Kumari in the lead. In Kohinoor (1960) she showed a distinct flair for comedy, proving that the great tragic icon of the Indian Screen was equally at home in light flakey roles.

But the definitive role of her life time was as the bejeweled, neglected wife –Choti Bahu,in Sahib Bibi Aur Ghulam opposite Guru Dutt. Her private life matched that of Choti Bahu’s- a woman longing for love and attentionwho languished in self imposed solitude. Disillusionment with Amrohi intensified her loneliness. The superbly gifted actor speedily plunged into self-destruction like Choti Bahu, reliving the part of the wife in Sahib Bibi Aur Ghulam. That particular film remains a watershed in her acting.
By 1964 Meena Kumar had left Kamal Amrohi. Her swan song, Amrohi’s Pakeezah was in the making. Conceived by the ill-starred couple during their honeymoon days, Pakeezah eluded its maker for years- making it one of the longest films in the making.
Quite soon after she parted with Amrohi, Meena Kumar acted in Phool Aur Pathar(1966) with a stunningnewcomer - Dharmendra. The film brought her additional acclaim. Love was the only panacea out of the debris of her life. If Dharmendra provided it in abundance, he dragged her deeper into self abuse. Noted for her fine discipline, her sense of dedication once, the actress found it difficult to keep pace with shootingschedules. Dark moods and ill health dogged her constantly. Writing poetry gave her solace as she poured out lyrics that have since been devoured by silence. The lone significant film before she passed away was Gulzar’s Mere Apne.
Misunderstood, neglected,ruthlessly exploited by those she trusted, Meena Kumari passed away penniless, with an unpaid hospital bill of three thousand odd rupees in March 1971. It is of course no accident that her death boosted Kamal Amrohi’s Pakeezah to thundering success. Mahajabeen’s fans flocked to see the last film of their beloved actor as they thronged to get a glimpse of her cortege at Landmark on Carter Road. Pakeezah was perhaps her farewell gift or a peace offering to the man she loved most. Loved and yet lost.
As in life, so in death, Mahajabeen reaffirmed her position as the greatest dramatic actor of the Indian movie industry, carving an enduring niche. Not merely as an actor, but as a woman as well, Meena Kumari lived or loved by her own standards – her own convictions. She was the original Diva – the original Romantic, a liberated and progressive woman long ahead of her time. Atimeless icon for us all.