The 1950’s down 70’s are often considered as the ‘Golden Era’ of Bengali Cinema, reminisces Rwita Dutta and she recalls those times through the cinema of Soumitra Chatterjee

With the famous trio (Ray-Ghatak-Sen) in full swing, Bengali culture quite successfully and diligently carried forward the nascent fervor of Bengal Renaissance for a long time to come. In an age of complete decadence, the void created by these giant figures of quintessential Bengali heritage remains unattainable.

Soumitra Chatterjee, the name every Bengali, cutting across generations swears by, is no more with us; that unfortunately, adds up to the number of the departed legends!!

The quintessential Bengali bhadrolok (gentleman), one of the finest actors Bengal has ever produced, truly like his eminent predecessors, (Rabindranath Tagore, Satyajit Ray, Swami Vivekananda, Pandit Ravi Shankar) acted as a bridge between the local/regional with the universal context of Global cinema, a rarity of the present time.

Chidananda Dasgupta, once commented “Ray has found his man in Soumitra”. Often considered as a muse of Satyajit Ray, Soumitra Chatterjee truly represented the finesse of Bengali intelligentsia. The eternal debate of Uttam Kumar, the Superstar Vs. Soumitra Chatterjee, the actor defined the eternal cultural conflict of the community. He was the face of urban middle-class intelligentsia and their earnestness.

Although mostly remembered for his finest performances under Ray’s auteurship, he is often eulogized as the epitome of suave urban youth in Mrinal Sen’s Akash Kusum (Up in the Clouds, 1965), Ajay Kar’s Saat Pake Badha (The Marriage Vows, 1963), as deviant youth in Teen Bhubaner Pare (On the shores of the worlds, 1969), in a hilarious comedy penned by Satyajit Ray Baksha Badal (1970), Basanta Bilap (1973), Tarun Mazumdar’s Ganadevata (The People, 1978), Sansar Simante (1975) and Tapan Sinha’s Jhinder Bandi (the prisoner of Jhind, 1961), Atanka (1986), Antardhan (1992), Bijay Bose’s Baghini (1968), Inder Sen’s Pratham Kadam Phool (1969), Salil Dutta’s Stree (1972) - time and again, he proved his versatility as a stupendous performer. 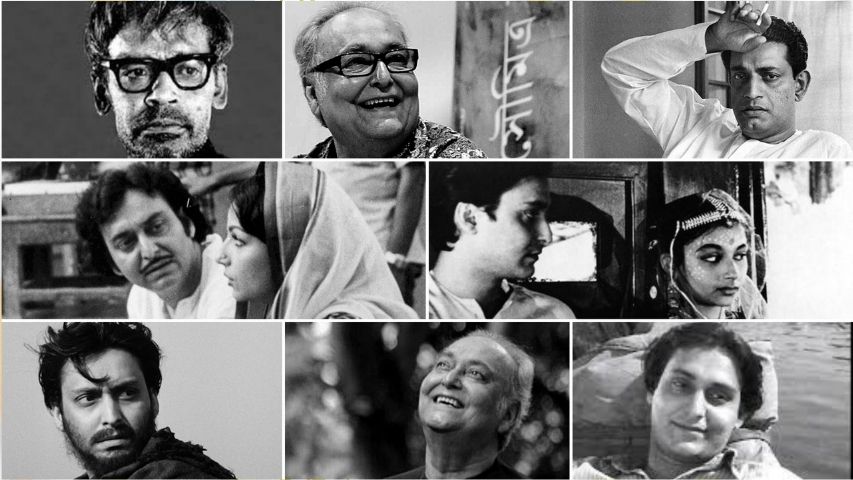 Even in the otherwise stagnant 80’s he left his mark as an extraordinary character ‘Khidda’ (a swimming coach) with a prodigious performance, which kept on lifting our dying spirit even today.

His effervescent presence simply uplifted numerous potboilers, otherwise negligible in its form and content. His nuances, sensitive portrayal of myriad human characters had charmed audiences all over the world for decades. Not only a prolific actor, he is emblematic of Bengal’s alignment towards literature and other artistic issues of life. He is eponymously gigantic in the theatre world also, his live performance in Tiktiki (1995), Homapakhi (2006) and Suman Mukhopadyay’s King Lear (2010) is historical. His recitation is ephemeral, he has also penned down 12 poetry books. He edited a famous little magazine named “Ekshan” (Now) for quite a long time.

His global recognition is aplenty. In 1999, he was awarded with ‘Officers des Arts et Metiers’ by the French Government, followed by the highest civilian honor by French Government ‘Legion of Honor’ in 2019, Padma Bhusan in 2004, Sangeet Natak Academy Award in 1988, and Dadasaheb Phalke for his lifetime achievement in cinema in 2013. Interesting to note, he had to wait more than two decades for the National Award in the role of a Best Actor. Finally, he was awarded for Padakheep in 2007.

Soumitra Chatterjee, in one word, symbolized Bengali middle class’s trajectory as a community and their agony, joy, pathos, crisis and despair over three decades. Kolkata’s cultural legacy and heritage is in eternal loss without him.

This is a piece in collaboration with Just Cinema - https://www.just-cinema.com/