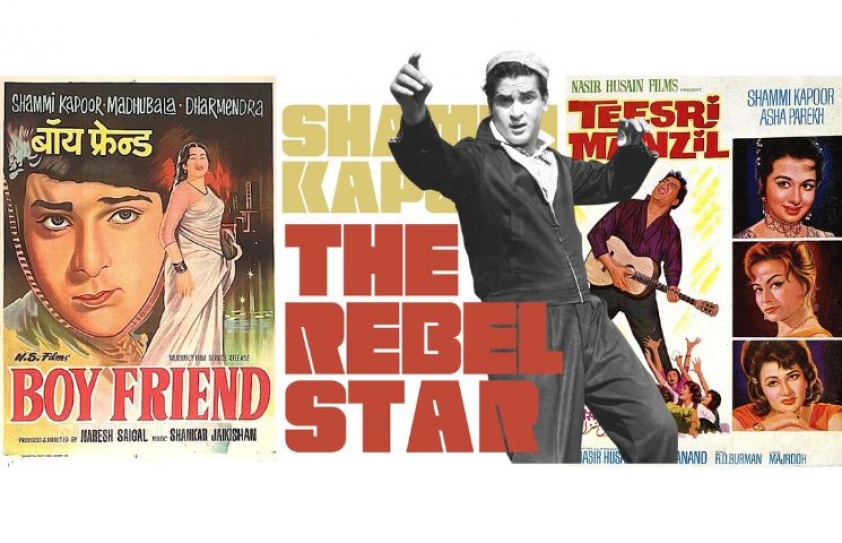 Everything about Shammi Kapoor was crazy. Starting out as a Prithvi actor in his father’s theatre company and suffering 18 flops in movie-land on the trot, he got it right, by fluke. Legend has it that the miserably demoralized son of Prithviraj Kapoor, brother of Raj Kapoor and hubby of Geeta Bali (who was a bigger star than him) was advised by the great insightful Movie Moghul Sashadhar Mukherjee, the founding father of Filmalaya, a production house and nursery that gave the 1960s such super-star heroines as Asha Parekh, Sadhana and Saira Banu, to shave off his moustache, stop aping his brother, Raj, and try something new, fresh and original.

Since he had nothing to lose, he not only knocked off his lip-growth, but also took a crew-cut, wore “hip” clothes and unleashed a body language that was unthinkable to purists in those simple 1950s. What Elvis Presley did to America (and the world) in the early fifties, shock the purists and drive the young crazy, Shammi did in India. His raw, untamed, animal-energy and wild, sensuous body language struck a chord with India’s youth and caught fire. Tumsa Nahin Dekha was a huge hit and marked the beginning of the Shammi Kapoor era. Dil Deke Dekho followed, with the same electric feedback… and with Junglee in 1961, Yahoo became the anthem of the new generation. 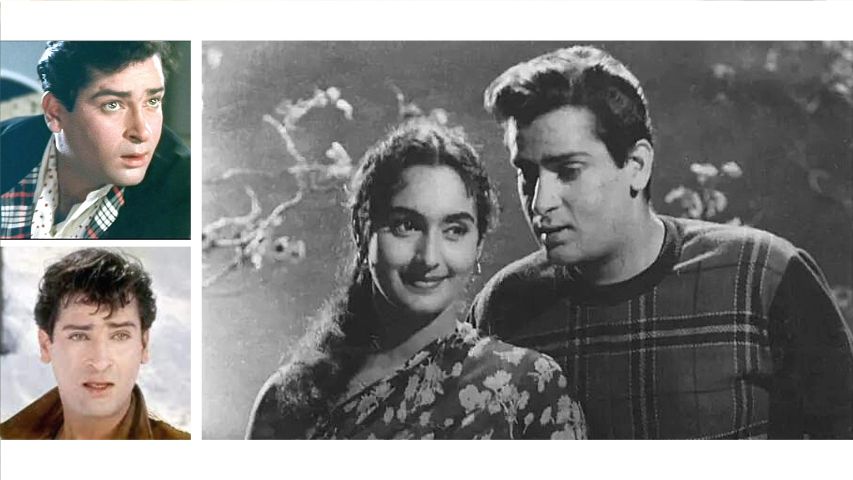 What was so special about Shammi K? For one, his killer looks: Tall, fair, deadly handsome, he was Numero Uno. He was a universe away from that reigning trio, which Dilip Kumar, Dev Anand and Raj Kapoor epitomized. Totally devoid of any heavy-duty emotional, historical or ideological baggage, and impatient with any form of overt social or political layering, Shammi epitomized a free spirit in full flow, demonstrating the zest for life. Unpretentious and completely divorced from cinema as an art form, he was Mr. Bindaas, Mr. Lover Boy, Mr. Romeo, rolled in one, defining popular, mass-based entertainment like no one did or could.

His persona too was unique. Never in the history of Bollywood has there ever been such a dashing and debonair, comic-hero. Shammi’s buffoonery (often in tandem with Rajendranath) and the way he pulled it off was amazing as were his comic turns like romancing Lalita Pawar in Professor! Alongside, he was passionate and virile incarnate as his pyro techniques with the drop-dead looker Sadhana in Rajkumar (Tum ne pukara, hum chale aaye. Tum ne kisi ke jaan ko) proved.

Also, unlike most other leading men of his time, he was not only cool with new, young heroines, but encouraging and helpful too. No wonder Sharmila, Asha and Saira continue to rave about his ebullient spirit as also his helpful, proactive mentoring. Romance, fun, high-decibel excitement and glamour marked all his films, usually played out in some lovely hill station. Not for him were the proletariat or common man roles. He was the definitive, fun-loving, masti-driven, rich, pampered laat saab! 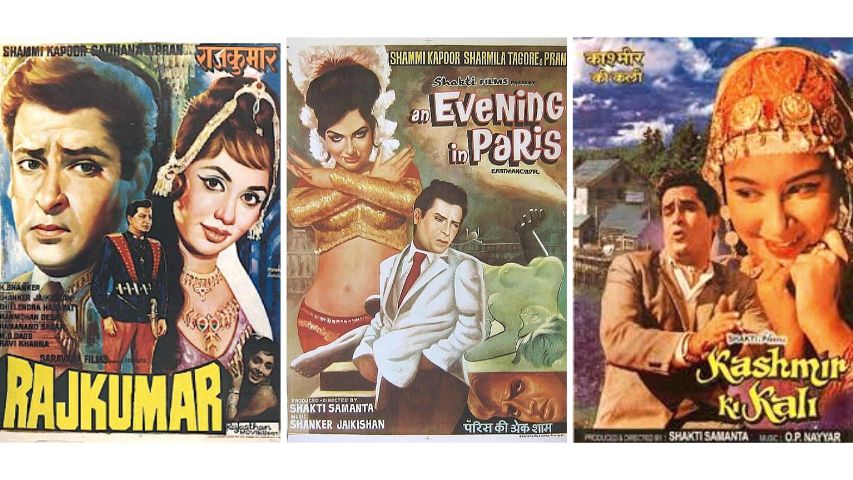 Despite ruling the late 1950s and 1960s with such mega hits as Tumsa Nahin Dekha, Dil Deke Dekho, Junglee, Prince, Raaj Kumar, Jaanwar, Kashmir Ki Kali, Teesri Manzil, An Evening in Paris and Brahmachari, critics never took him seriously. Perhaps it was because he never took himself or his roles seriously. But his fans worshipped him. His crazy, sensuous body language, dialogue delivery, amazing flair for comedy, flamboyant style and looks, devil-may-care attitude, agro-romantic handling of heroines… the Rebel Star was indeed something else.

Intelligent and realistic, Shammi gracefully quit the screen as leading man when he realized his girth was getting larger than his aura and moved to character roles. That too, he exited when he tired of “life with make-up” and switched to his Yahoo mode - only this time on the Internet. A techno and gadget freak, his romance with computers started way before it became a way of life in India and he was hugely knowledgeable and interested in it till the end. Coaxed into doing a small role in Rockstar, directed by Imtiaz Ali starring his grandnephew Ranbir Kapoor, B-town’s original Rockstar moved from sight to memory.

Before wrapping up this tribute, I can’t resist sharing my very own and personal Shammi Kapoor story. It happened around 2010 and it happened to be his birthday. Somebody had at some point texted me his mobile number and so, throwing caution to the winds, I called him. He picked up the call (as if I couldn’t recognize his voice!). 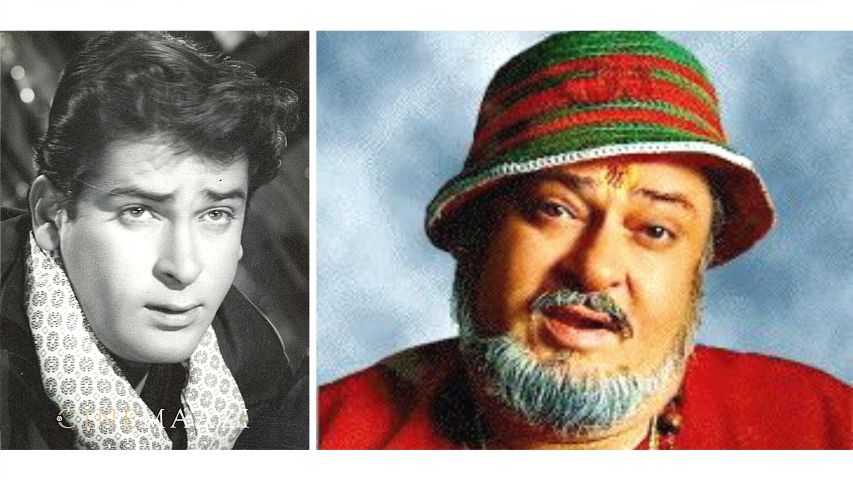 After stammering Happy Birthday, I begged him to give me 2 minutes. Breathlessly, like a zonked fan-boy, I related to him my Junglee experience. When it released, me and my friends hit the hall first day first show, balcony seats. Next day, we were there again, rear stall. Third day we repeated, middle stall. Day 4 saw me do a solo act, broke but on a high, in the first row with Saira on my lap and Shammi within handshaking distance! I can’t forget his laughter, loud and long, followed by a warm invitation to visit him on my next trip to Mumbai. Alas, that was not to be…

Junglee, Janwar, Budtameez, Bluffmaster, Pagla Kahin Ka, we shall forever miss you. Isn’t it appropriate that he passed away only two days before the 34th death anniversary of his idol, Elvis Presley on Aug. 16? In the final analysis, heroes and stars may come and go, but for you, Shammi Kapoor, one line every fan of yours on planet earth will always sing, full-throatily, with love and gratitude for all the joy you brought to their lives… Tumsa Nahin Dekha!