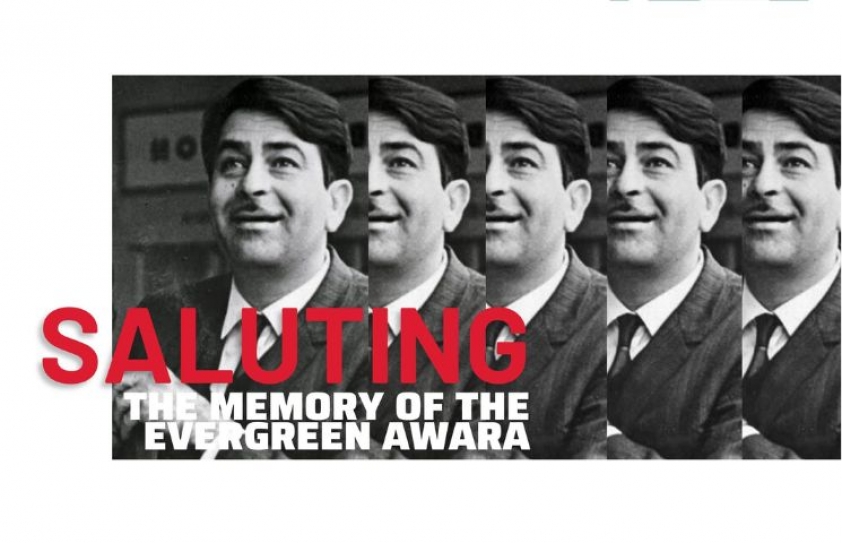 Monojit Lahiri pays homage to India’s greatest showman, the one and only - Raj Kapoor.

At a time when the Khans, Akshay, Ajay, Hrithik, Ranveer & Ranbir blitz the mainframe and the likes of Ayushman, Rajkumar Rao and Vicky Kaushal dominate the new parallel cinema, the legend of Raj Kapoor, to Gen Y, must seem vague, remote and generally irrelevant. However, to fans (the oldies?) his persona will always remain vigorous, vibrant and magical.

Raj Kapoor was arguably Bollywood's first Actor-Director who captured popular imagination across the 1950's, 60's, 70's, even 80's. There has never been anyone, since or after his exit, who had the ability to convert simple, conventional occasions, Mahurats, Festivals, Parties, to a major, mind-boggling event! He thought big, passionately, and single mindedly, giving all to his calling, never thinking about ROI.

A star-team member of the golden triumvirate that ruled the hearts of that generation, Dilip-Raj-Dev, his localizing the Chaplin persona into Raju, the charming, zany, happy-go-lucky Awara, Shree 420 and Anari remains memorable, both for his endearing antics as well as his bold and thrilling romance with his first, and best, R.K. heroine, Nargis. Finally, his focus on socially relevant themes championing the cause of the marginalized and disenfranchised souls abandoned to live on the fringes of society, yet magically celebrating joy amidst the diversity. 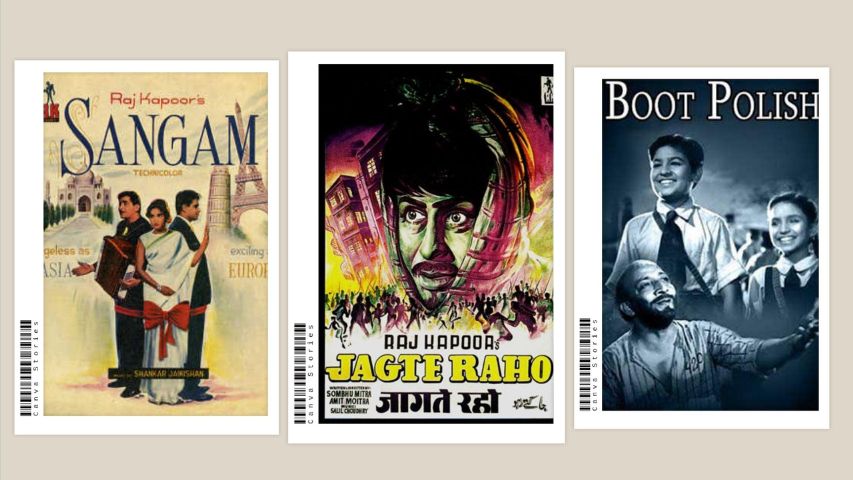 Interestingly, the colorful and gutsy genius started small. The eldest son of the late Prithviraj Kapoor, a Pathan from Peshawar - stunningly built and spectacular looking man who abandoned a career as a lawyer for the magic of the screen and stage, Raj Kapoor's first job was that of a clapper boy in a Kedar Sharma film in 1942. Hired by Ranjit Movietone at the princely sum of ten rupees a month, Raj occasionally managed an extra rupee when he was lucky to be selected as an 'extra'. Bombay Talkies was his next stop. The money was much more, a hundred rupees a month, but the queen who reigned over that studio, Devika Rani, wasn't impressed. This rankled all the more when her eyes repeatedly sought out another aspirant for special attention. Name? Yusuf Khan - alias Dilip Kumar.

Rumor has it that when Raj, after a year of steady 'iceberg' treatment finally approached the great lady for a job, she promptly fired him. It was this humiliation believed by Raj-watchers that could well have propelled the blue-eyed Kapoor to do his own thing. At 21, he produced and acted in Aag. A modest success, he next made Barsaat, which straight away rocketed him into big time. Teaming with Nargis, this film set the tone for the R.K. movies and established a team of outstanding professionals - Shankar-Jaikishan, Lata Mangeshkar, Mukesh, Shailendra, Hasrat - without peer. And then came Awara - a father-son story scripted by K.A. Abbas, with Prithviraj Kapoor and Raj Kapoor in mind. Mehboob Khan reportedly showed interest when offered the project, but insisted on replacing Raj with Dilip. He bought the script, allowed Abbas to sweet-talk a reluctant Prithviraj into playing his father, and started rolling. 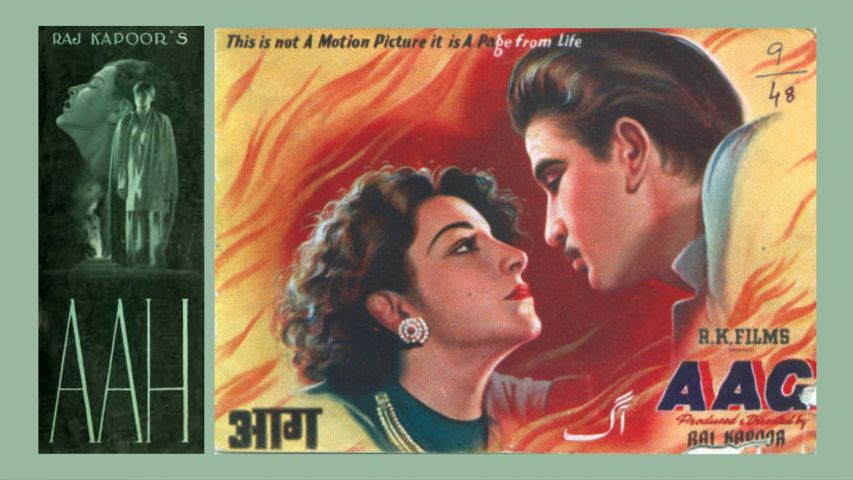 A super smash in every department, music, photography, acting, direction, Awara marked the beginning of a long and successful association with Abbas, which was to run its course through three decades, right up to Bobby (1973). Awara also marked the beginning of Raj’s ‘Chaplinesque’ phase: the funny walk, the blend of effervescent humor, romantic pathos, rib-tickling slapstick, the telling idealism – it was all there, desified. It was Awara that blazed his stars in the Soviet Union and Eastern Europe, regions where even today he remains a folk-hero. Awara Hoon and Mera Joota Hai Japani continue to be signature tunes, as far as Indian music goes for millions in that part of the globe, with Shree 420, among others, further perpetuating this image.

With the sixties came a change in focus. Romance gave way to blatant sex appeal. And the R.K. masterpieces of the Fifties, with the exquisite Nargis as centrepiece, were gently soft-focused from sight to memory making way for films like Jis Desh Mein Ganga Behti Hain with the heavy-hipped and bosomy Padmini. Now it was all super packaging. ‘Style’ was the thing, not ‘substance’. Jis Desh Mein Ganga Behti Hai, a huge grosser, was followed by the spectacular Sangam, the first Hindi film, which was shot extensively abroad, setting a trend which other filmmakers in herd-fashion followed. A smash hit, it paved the way for the most ambitious film of his life Mera Naam Joker, a five-hour epic that attempted to document the joys and sorrows of a circus clown. A spectacular flop (too diverse a theme), he made Bobby, a love story with two newcomers, his son Rishi Kapoor and Dimple Kapadia.  At a time when ‘multi-starrers’ and ‘action’ films were the flavor of the day, Bobby appeared to be a very risky business proposition, completely out of sync with every conceivable formula ruling the roost. But Raj was undaunted. “Love can never date’’ declared its most passionate apostle. It proved to be one of the biggest hits of its time – and Raj had struck again. 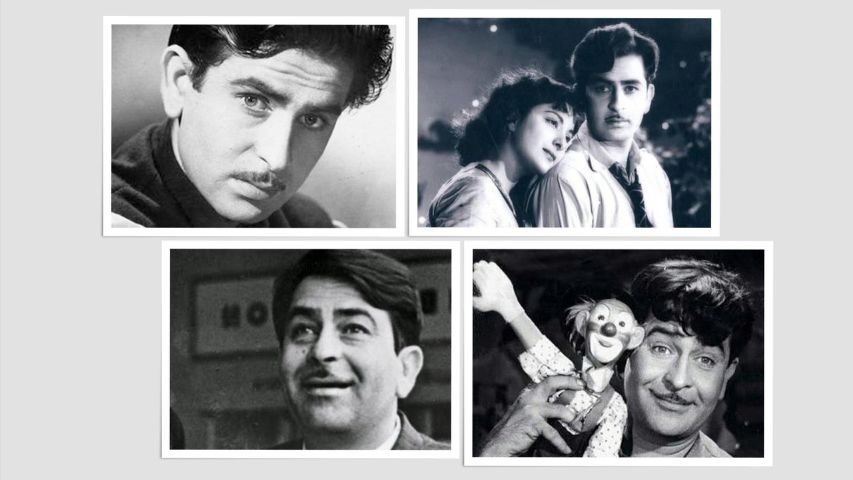 His next was his most ambitious and controversial film ever, Satyam Shivam Sundaram. Demolishing all accepted Indian film norms by permitting kissing on the screen, he had a scantily clad Zeenat Aman – the industry’s celebrated actress of the time. Wanting to educate the Indian public to accept nudity as an art form, Kapoor was obviously hoping for a template to attract commercial viability.

Prem Rog came next, with love as the central theme. Successful as it was, the film was a far cry from the maker of Awara, Barsaat and Shree 420. His last film, Ram Teri Ganga Maili starring his youngest son, Rajiv Kapoor and a newcomer named Mandakini as heroine, set the box-office on fire.  Propagating Kapoor’s personal vision of erotica as a thing of beauty, he had said, ‘‘for better or worse, I have been accused of stripping my heroines. Beauty, like evil, lies in the eyes of the beholder, and where I see beauty, others see evil.”

In the final analysis, whatever were the successes and failings of Raj Kapoor, one thing remains certain - he was truly India’s Greatest Showman. A gutsy up-front filmmaker who continuously braved odds and defied the times to weave his own personal version of aching, heart-stopping, romantic fare, reminding a blasé and cynical world that when the last of the gimmicks, formula and combinations will have bitten the dust, one thing will remain ever-true, evergreen and ever-fresh: love.

He may have exited from sight to memory but the legend of R.K., despite his landmark studio in Chembur, Mumbai being sold to the Godrej Properties, will forever remain with us.