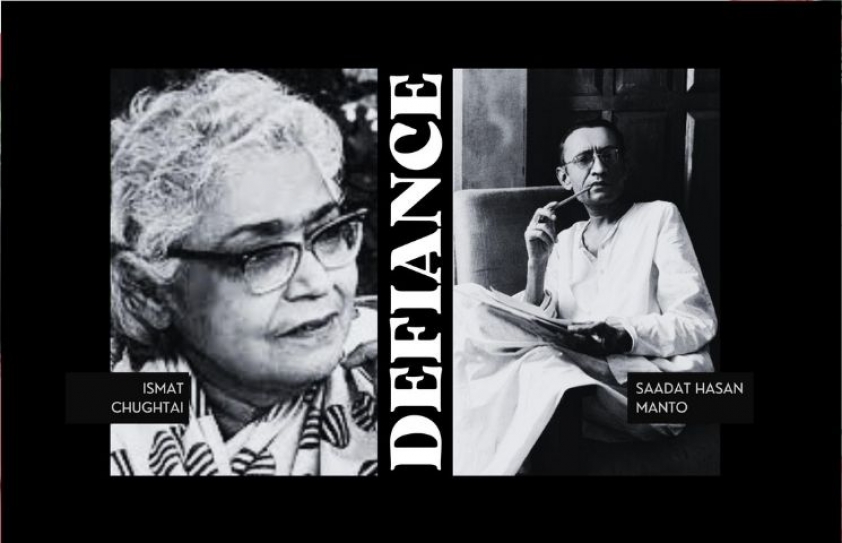 Khalid Mohamed marvels at the bold and timeless writings of the iconic writers Ismat Chughtai and Saadat Hasan Manto, on the behind-the-doors scenes of the Bombay film industry.

They achieved the impossible. Urdu writers Ismat Chughtai (1915-1991) and Saadat Hasan Manto (1912-1955), who have been extensively translated in several languages,  invested a literary value in their writing on the private lives of Bombay’s film personalities - a feat, which is unimaginable today when movie journalism is either dismissed as trashy gossip or sponsored panegyrics.

For a long time now, there is neither detailing nor plain truthspeak. Reduced time-spans of the readers are the pretexts for the largely shallow and quickie film writing, which booms on, be it on social media, websites and the fast-perishing print magazines.

Vituperatively merciless, in their portraits of yesteryear’s actors, both Chughtai and Manto would hit so far below the belt that their work retains its shock value to date. In particular Manto’s pen portraits of the iconic vamp Kuldip Kaur, the eminent dancer-actor Sitara Devi are unsparing. By comparison, Ashok Kumar, to a degree Nargis and actor Shyam, who passed away prematurely and the singer-actor Nur Jehan, who migrated to Pakistan, received a softer treatment.

Was this brand of film writing fair? Wasn’t it objectionably intrusive? A flurry of valid questions arise, naturally. Yet, on re-reading their work related to the Bombay film industry, you can’t help marveling at their brutal honesty and their fluent prose brimming over with closely-observed moments within the film enclave. Tongue firmly in cheek, or even contradicting herself, Chughtai had asked in an interview, “How can I say anything against films because it’s through films that we’re fed?”

Indeed, of all the stack of books on Bollywood, the republished ‘A Very Strange Man’ still continues to be under the readers’ radar. It’s accessible on Amazon online and wedged in the racks of quality-conscious book stores. 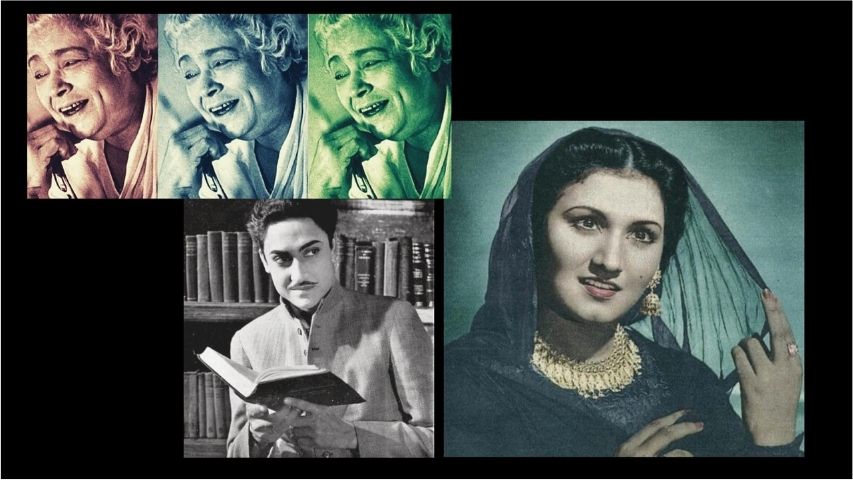 Written in Urdu by Chughtai under the title of Ajeeb Aadmi, and ably translated into English by Tahira Naqvi, the slim volume is an incisive account of the rhapsodic romance between Guru Dutt and his muse Waheeda Rehman.

Although the names were altered  to Dharam Dev and Zarina Jamal, it’s more than evident that the story dared to relate the real-life liaison between the genius actor-producer-director, Guru Dutt, and the actor, Waheeda Rehman whom he met in Hyderabad, and groomed to be presented to the Hindi film industry on producing the  crime thriller C.I.D. (1956), directed by Raj Khosla. The director had expressed his doubts about her calibre but the film’s producer was adamant.

A majority of millennials may not know about the consequences of the romance, which is believed to have disrupted Guru Dutt’s marriage with singer Geeta Dutt. Eventually in 1965, it is believed, despair and depression led to the death by suicide of the auteur director at the age of 39. Arguably, no other writer besides Chughtai could have narrated the tale with an equal amount of candour. Neither is she judgmental about the doomed love story nor does she lapse into figments of her imagination.

If Chughtai is trenchant in her prose, it is purely when she discusses the hard-hearted ways of the film-making system. Career ambitions,  maintaining a public image and the grime behind the glamor are endemic, she emphasises. 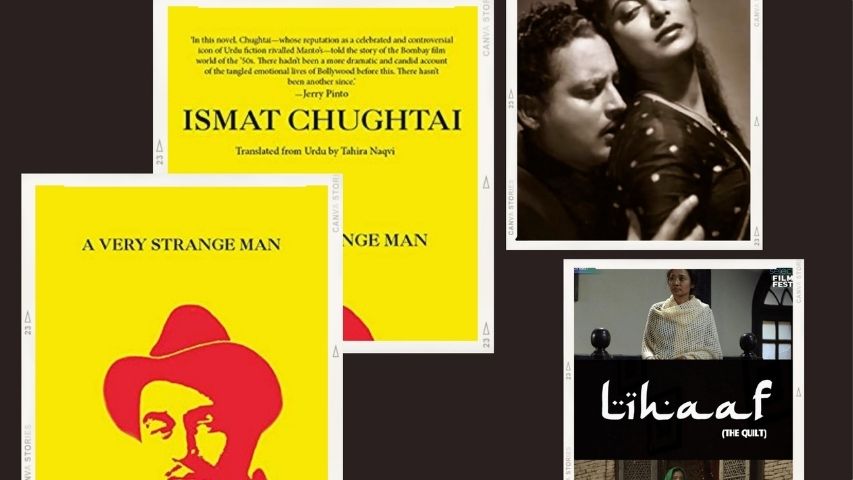 Another book by the author, Masooma, which is also visible at the bookstores and online outlets, however, just isn’t in the same league. The exploitative movie business is the milieu again. Yet  the story about a girl from a “respectable” family, who sinks to the lowest depths of depravity in the Bombay of the early 1960s, doesn’t have the tenderness or the psychological acuity of A Very Strange Man.

I’m bringing up A Very Strange Man not only because it’s an eye-opener even for the know-alls of Bollywood, but to assert that no writer could possibly have the guts to author a similar tell-all today. Commissioned biographies fall into the category of hagiographies, which I plead guilty of in the case of the Amitabh Bachchan coffee table book To Be or Not To Be, while cut-and-paste hatchet jobs from magazine articles and posthumous recalls, are littered with half-truths.

Moreover, more than ever before authors and publishers are wary of being slapped with lawsuits, which turn out to be protracted battles,  by the film star or their surviving families.

As apparent in Chughtai’s controversial writing (Lihaaf, a short story on a same-gender relationship within an aristocratic household, for example), she had that flair for narrating stories frankly and fearlessly. On another note, she possessed an insider’s knowledge of the film industry, since her husband Shahid Latif, was a producer and director with whom she had collaborated on several socially concerned films - most famously Sone ki Chidiya (1958). Here was an all too real take on the exploitation of actresses, especially, by their relatives, acolytes and assorted dependents. 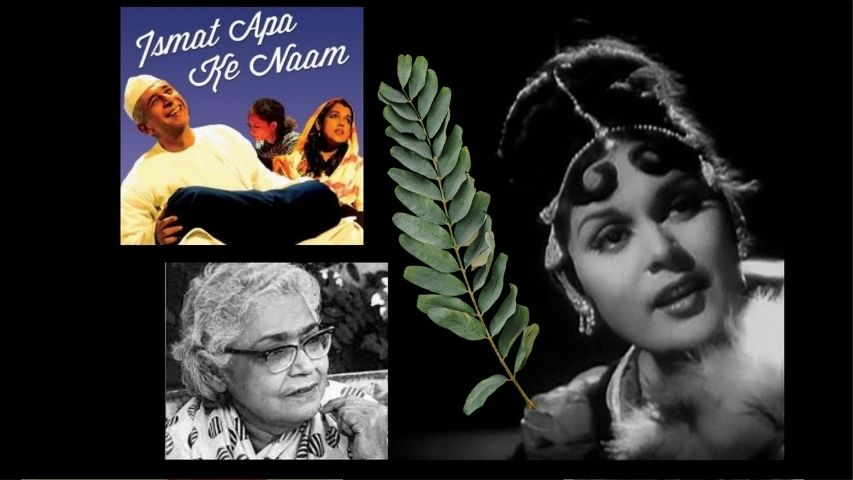 Nutan, the leading lady of Sone ki Chidiya, would cite it as one of her career-best films. Incidentally, it featured playback singer Talat Mehmood in one of his rare appearances on the screen as an actor. The era’s most undervalued actor, Balraj Sahni headed the cast as an upright poet who strives to rescue the proverbial goose, which lays the golden eggs. The film’s music score by O.P. Nayaar with lyrics by Sahir Ludhianvi yielded such unforgettable songs as Pyaar Par Bas Toh Nahin Hai and Raat Bhar Ka Mehman Hai Andhera.

When Chughtai moved from Aligarh to Bombay, her first job was that of a municipal school inspector. She gravitated towards films, selling her first script Ziddi to Ashok Kumar, who was associated with Bombay Talkies. She was paid Rs 20,000, a fee equivalent to that of the film’s heroine Kamini Kaushal. Dev Anand, the leading man, a newcomer then, was paid Rs. 6,000.

For Shahid Latif she also scripted Aarzoo and Buzdil, which appealed to the mandarins as well as the masses. By contrast, her scripts for Sheesha, Fareb Darwaza, Lala Rukh and Society proved to be downers. As for her story for the Garm Hawa, on the partition dilemma faced by Muslim families, it was adapted into a screenplay jointly by Kaifi Azmi and Shama Zaidi, and is justly cherished as a classic.

Besides Ismat Chughtai, the film writings of Urdu litterateur Saadat Hasan Manto, are a must-read, too, for anyone interested in the way Bollywood was and continues to be. It’s a strictly need-oriented world out there, as borne out by Manto’s collection of essays compiled in a book titled Stars from the Sky.

Manto, like Chughtai, would write film scripts and was immersed in the movie world. Among the ones he’s credited with are Mirza Ghalib, Jhumke, Shikari, Begum, Chal Chal Re Naujawan, Kisan Kanya, Apni Nagariya, and Eight Days in which he even acted in the part of an airforce officer. 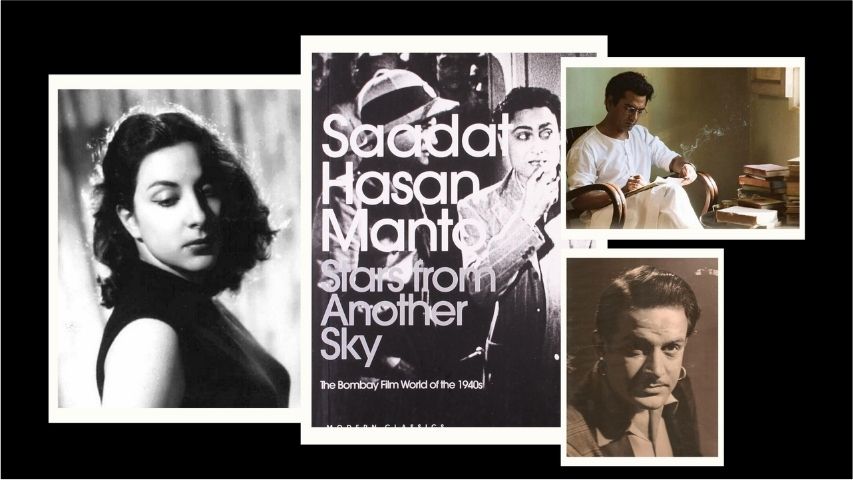 He makes no bones about hanging out with film personalities, admitting to the fact that he would cadge meals, expensive liquor, cigarettes and fancy shoes from them. Yet that didn’t prevent him from penning profiles on stars, as he viewed them during the after-hours. Plus, Manto’s essay ‘Why I Hate Bollywood’ continues to be relevant right to this millennium. Nandita Das’s biopic on the iconoclastic writer, afforded a glimpse into the heart and mind of Manto who eventually chose to shift from Mumbai to Pakistan. For his short stories he was charged with obscenity thrice in India and as many times in Pakistan but was fined only in one case.

Incidentally, Ismat Chughtai’s controversial story Lihaaf was filmed in 2019 by Rahat Kazmi, featuring Tannishtha Chatterjee and Anushka Sen, and was dropped on the streaming channel Voot Select. Surely, it needs a wider viewership.

And Naseeruddin Shah’s theatre troupe has consistently revived her memory by blending three of her stories for a series of provocative monologues called Ismat Aapa ke Naam. Shah followed this up with another stage tribute to the unwaveringly outspoken feminist writer with the play Aurat! Aurat! Aurat!

In sum, then, the insightful observations and comments on film personalities by Manto and Chughtai, are text-books for cinema lovers - be it the millennials or the senior generation. But be warned, they are not for the faint-hearted. Here are two defiant authors who exposed the secrets behind the closed doors, without mincing their words. It goes without lamenting that today’s film journalists and biographers, curbed by omnipresent public relations agents and timid publishers, can’t even dream about being in the same league, or anywhere close to it.