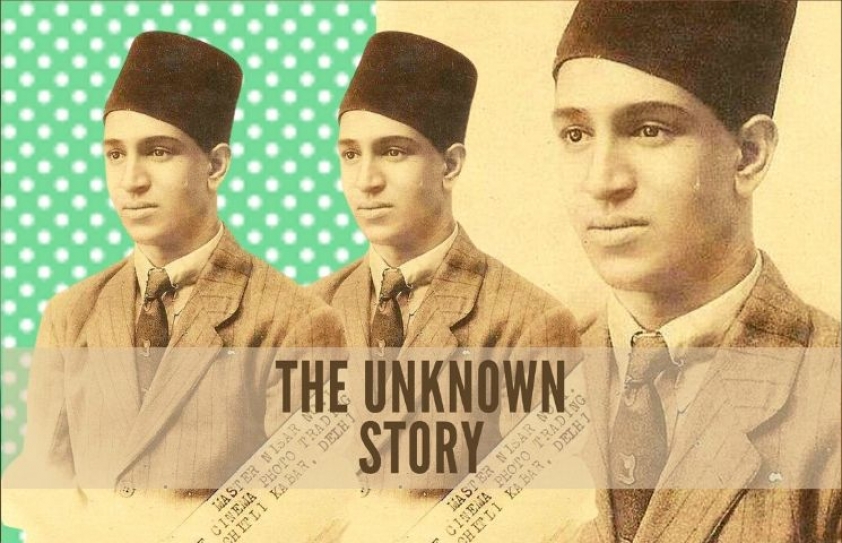 How many even know about India cinema’s first superstar, Master Nissar, and how many more Master Nissars are out there wasting away in the shadows? asks Khalid Mohamed

It’s never too late to retrace the history of Indian cinema – specifically the Hindustani-language ones most often produced in Mumbai. Here I attempt to recall an accidental assignment as a rookie reporter of The Times in India during the latish-1980s. The chief reporter said blandly, “Some old actor has passed away, terribly poor and on the streets almost. It’s not far from the office. Can you go and check?”

I did. This was decades ago. And there was a kind of hush in a decrepit chawl in one of the twisty bylanes of Dhobi Talao, packed with vegetable stalls and hawkers, in South Bombay. Neighbours and curious onlookers had gathered outside a matchbox-sized room, raising funds to give the star a decent burial at the Kabrastan nearby.

No one would enter the room, the smell of an old man lying there was overpowering. Two old ladies claimed he was the first superstar of Indian cinema, His only earthly possessions were a tin plate, a chipped cup of tea and a medium-sized bundle of clothes. No relatives had been located, all the information which could be gathered then, as he was leading a hand-to-mouth existence and occasionally participated in the evening qawwali sessions at the Haji Ali Dargah.

The report of his passing away, at an indeterminate old age, was sketchy admittedly. A well-meaning Film and TV Institute of India, Pune graduate ‘phoned to ask, “Are you sure this person was a star? Couldn’t find a word about him in our archives.”

Had I exaggerated or distorted the story? “Superstar, indeed!” the graduate had huffed and banged the ‘phone down. Fortuitously with time, an impetus in film research and scatty information on the Internet, I could only confirm that I hadn’t bungled the story. In fact the news editor had given me a note of commendation, which I have still preserved, for landing a ‘scoop’. Hardly, that was because no one, be it from the film industry or the press, strived to keep track of Master Nissar who had dominated the screen specially during the era of silent cinema of the 1920s but had retained his fan base with the arrival of the talkies, to eventually being superseded by K.L. Saigal. 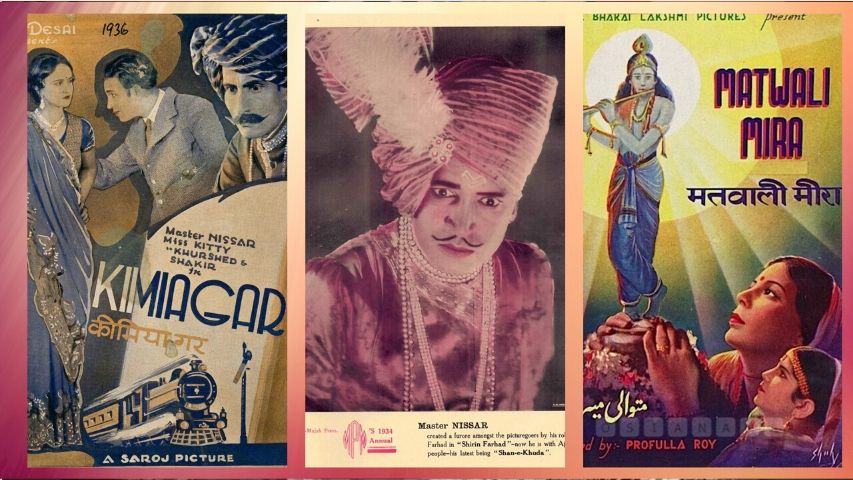 Today, the life of Master Nissar is still shadowy. At the very least, it is known that he was a product of Madan Theatres, Calcutta. And, he had entered films when the company ventured into the business of setting up its own film studio. Thanks to his fluency in Urdu and ability to belt out songs on the spot, he was an instantaneous success, and formed a hit pair with Jehan Ara Kajjan. They appeared in India’s second and third talkie films, Shirin Farhad and Laila Majnoon, after the release of Alam Ara in 1931. Chronicles now maintain that he sang thirty to forty songs in his subsequent films.

K.L. Saigal became a national craze with the success of his brooding performances and songs of Chandidas (1934) and Devdas (1935).

In fact, with advancing age and the unstoppable popularity of Saigal, Nissar had to take on subsidiary character roles. And as assignments ceased, he had to depend on hand-outs given to him by Nargis and Nadira, according to the now-affirmed film lore. The game was over, he hadn’t invested his money in property, businesses or even in the bank as the stars of the subsequent generations did. Hence, abject poverty was inevitable and I’d seen his skeletal frame buried in the  Kabristan.

Although interest in the journey of Indian cinema from its inception to today, has increased majorly. But the focus is still relentlessly on the actors of the post-Independence era.. Slick tomes on the stars,  tell-all autobiographies and occasional studies of celebrated directors do fly off the shelves. But that’s it.

Publishers aren’t willing to touch anyone or any subject related to cinema that isn’t marketable. A sale of 5,000 copies, preceded by a celebrity-in-attendance book launch, is a must-do. The FTII has published some monographs but these are mostly inaccessible.

Simultaneously, over the decades thousands of films have turned into junk. Efforts to rescue them have been sporadic, if not frustratingly futile. All that remains of Alam Ara (1931) are a few fuzzy stills edited together. Black-and-white films of the 1930s and ‘40s are in such poor shape that all you can see of K.L. Saigal in Street Singer (1938)  are mostly smudgy shadows.

As lamentably, superb entertainers who brought joy to countless viewers in the dark of the auditorium have been erased from the memory files, except for the die-hard cinephiles. If the GenTeen has heard of some of them at all, it’s mostly from their grandpops tripping on nostalgia lanes. By contrast, Hollywood greats are permanently catalogued. Take the case of the dancing wonder Gene Kelly. His Singin’ in the Rain (1952) continues to be celebrated globally. At home though, Bhagwan Dada, Mumbai’s version of the tap-dancer was forgotten even when he was alive. 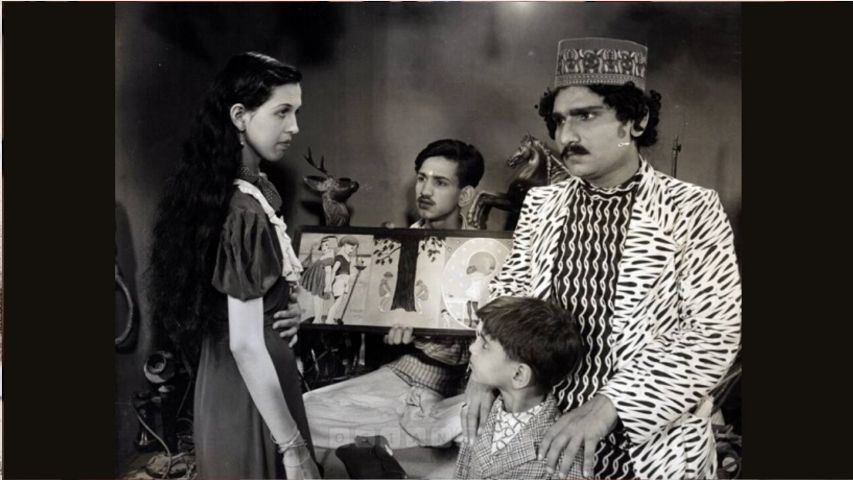 Bhagwan Dada’s moves to the song Shola jo bhadke in Albela (1951) would entice the audience to dance with him, beg the projectionist for an encore, throw coins at the screen and generally go delirious with excitement. Bhagwan Dada’s body rhythm and steps were picked up by Amitabh Bachchan (he admits it too).

Senior choreographers agree that there was no one quite like the Albela man, his steps being matched by the lively Geeta Bali.

As it happened, Dada’s subsequent films didn’t evoke the same fervour. Plus, given to whisky galore, horse racing and gambling, Bhagwan Dada was on a self-destructive spree, aided by his secretaries and business partners.

Once an owner of a fleet of Cadillacs and Buicks, he went bankrupt.

Dada moved to a pocket-sized room in a Dadar chawl. He would make ends meet by doing bit roles (he’d pop up for half a minute in the midst of a dance, performing his signature step). I met him, circa 2002 - when he was ailing and he couldn’t move from his mattress on the floor. He wondered why anyone would want to interview him. Glaring at my pair of spectacles, he laughed, “Ae chashmish, you don’t have any other work or what?”

Bhagwan Dada, over a glass of rum, spoke bitterly about how his contemporaries had avoided him “as if I’m stinking or have bad breath… maybe I do?”

The tragic instances of Bhagwan Dada and Bharat Bhushan (the gentle-mannered hero of Baiju Bawra and so many black-and-white vintage hits) - both of whom went on skid row - are often cited by the senior generation of B-town.

Yet, these actors are never ever chronicled or saluted for their artistry. Similarly, hundreds of marvellous films of yore are rusting away in the studio vaults. When they are beyond repair they are sold as “junk”, often retreaded into bangles.

Film heritage perishes, the great entertainers vanish into anonymity. But I just hope that there is still some other rookie reporter out there somewhere, discovering the end of another Master Nissar.

Dare I say, respect and acknowledgement of the unknown greats, lingering in the shadows, is as essential as a camera is to filmmaking.