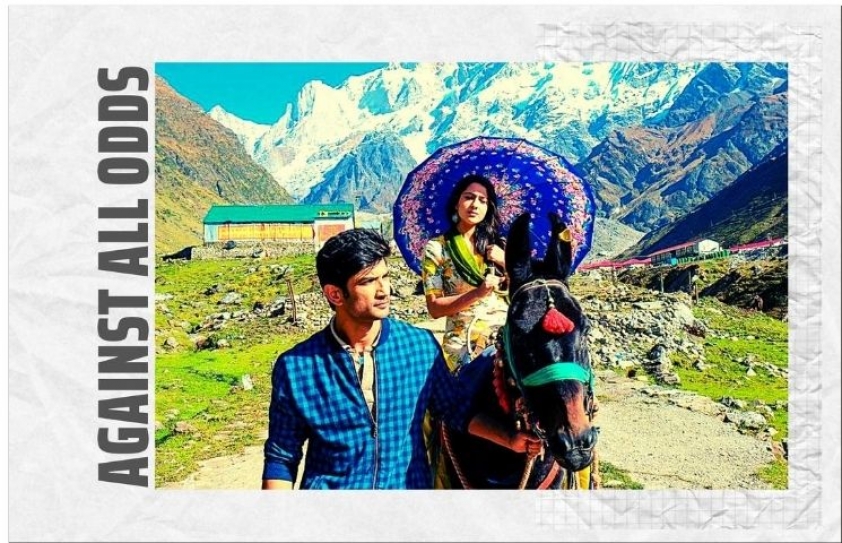 Film historian, Dhruv Somani, takes you right into the storm of Bollywood’s films revolving around natural and man-made disasters.

Disasters – of enormous tragic proportions -- have been timeless themes of special effects-laden blockbusters of Hollywood. Humankind versus devastating calamities have been evidenced, say in San Andreas, Meteor, Towering Inferno, Volcano, The Day After Tomorrow, Dante’s Peak, 2012, Deep Impact, Geostorm, Twister, The Poseidon Adventure and one of the biggest hits of all-time Titanic. Quite presciently the COVID-19 virus outbreak had been hinted at in Contagion.

By large Bollywood however, has shied away from spectacles of sound and fury involved in disaster management. At most, there has been a clutch of films in which the sub-plot or a key turning point in the storyline have touched upon the devastation wrought by natural and man-made disasters.

From my early childhood I remember a scene from the family drama Kaajal (1965), in which Shailesh Kumar drowns after getting stuck in a whirlpool during a boat race. Similarly Milan (1967), which dealt with reincarnation; depicted Sunil Dutt and Nutan losing their lives after their boat capsizes in a river’s swirling waters.

In Mother India (1957), a massive village had been wiped out, leading to untold misery for the inhabitants. Years later in Lagaan (2001), a drought-hit village exacerbates the situation for farmers who must pay an unjust hefty tax to the British Raj. In My Name Is Khan (2010), the American town of Georgia recreated in Mumbai’s Film City is shown to be submerged underwater due to unprecedented floods. And, there were OMG: Oh My God (2012) and Kai Po Che! (2013) – An earthquake becomes the turning point in the lives of its characters.

For this Sunday, here’s discussing 9 films then, in which disasters played pivotal roles: 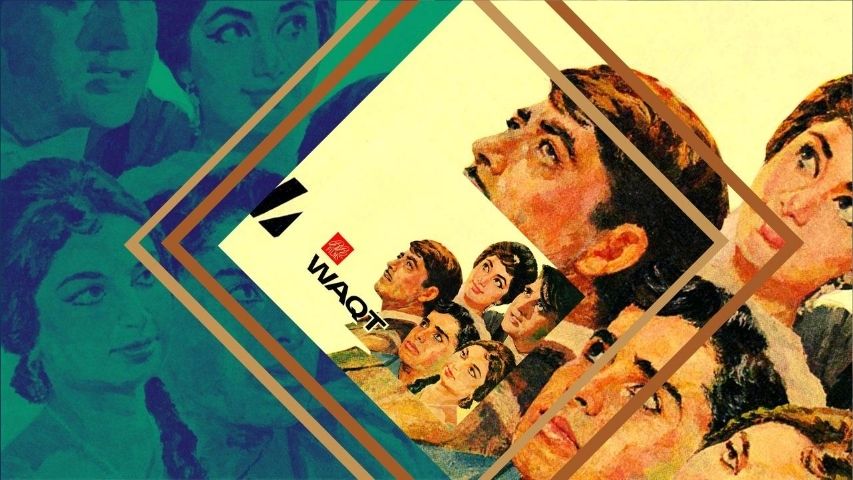 Produced by B.R. Chopra and directed by his younger brother Yash Chopra, here was one of the first multi-starrers comprising an ensemble cast of Raaj Kumar, Sunil Dutt, Shashi Kapoor, Sadhana, Sharmila Tagore, Balraj Sahni, Achala Sachdev and Rehman. A well-remembered super-hit, it revived the lost and found formula. The screenplay sought to convey that good times could take a drastic U-turn within a split second. The focus was on the affluent trader Lala Kedarnath and his family of three sons, all of whose birthday falls on the same day. Celebrations are on with Balraj Sahni singing, Oh Meri Zohra Jabeen.

Quite unexpectedly an astrologer has already predicted doom for Lala, advising him to give up his arrogant ways since fate could cause a reversal of fortunes. Kedarnath laughs off the astrologer’s forecast and is sharing his plans for a more prosperous future with his wife, when an earthquake reduces his town to rubble. The arrogant Kedarnath is left penniless. Worse, his family has gone missing.

It seems the Chopra brothers were keen to cast the Kapoor brothers Raj, Shammi and Shashi Kapoor, as the sons but advised against this by Bimal Roy who said that the brothers look too similar to get away unrecognized by the parents in the film. When Asha Parekh declined a role because it was too brief, Sharmila Tagore was paired opposite Shashi Kapoor in the first Hindi feature to depict an earthquake. 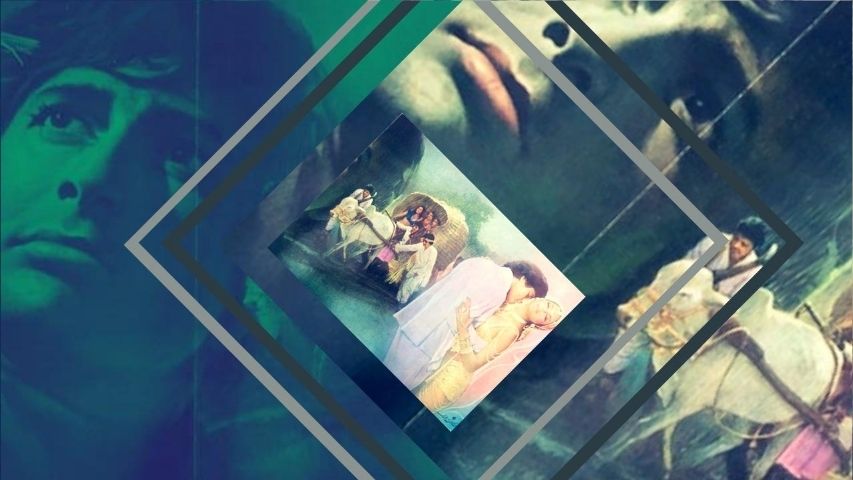 ‘Love Sublime’ as it was called; Satyam Shivam Sundaram incorporated a flood sequence towards the climax. The central plot line contrasted physical beauty with the spiritual beauty of a woman and was said to be Raj Kapoor’s ode to Lata Mangeshkar. The legendary singer was even offered the lead role but refused right away on seeing the provocative costumes she would have to wear. Ditto Hema Malini.

Starring Shashi Kapoor and Zeenat Aman eventually, at tremendous expense the showman captured sequences of heavy rains causing massive floods and destruction in a village. When a dam bursts open, the hero – an engineer – must save the woman with a scar on her and realize that love isn’t only skin deep. The songs by Laxmikant-Pyarelal, the sensuousness of Zeenat Aman and a brief appearance by Padmini Kolhapure were the strengths of the opus, which performed averagely at the box office. 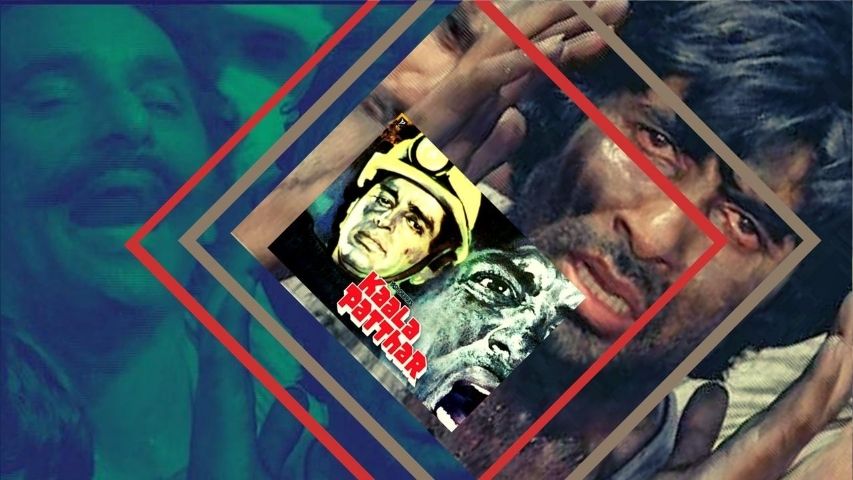 Based on the real-life Chasnala Mining disaster, the Yash Chopra-helmed project Patthar was scripted by Salim-Javed, said to be also inspired by Joseph Conrad’s classic novel Lord Jim.

Again a multi-starrer with Amitabh Bachchan, Shatrughan Sinha, Shashi Kapoor, Raakhee Gulzar, Parveen Babi, Neetu Singh, Parikshit Sahni and Prem Chopra, here was a much-awaited film, which however tanked at the box office. The script was located in a village in the State of Bihar, where the economy is dependent on its coalmines. One of the mine owners is warned that a landslide is imminent, which could lead to the death of several miners. The warning is ignored. The rescue operations were excellently lensed, and the sub-plot of a love story between Amitabh Bachchan and Raakhee Gulzar, was sensitively handled.

Later in 1983, Shatrughan Sinha produced and acted in Kalka on the exploitation of labor at the coalmines. Co-starring Raj Babbar, Rameshwari, Sarika, Arun Govil and Mazhar Khan, it depicted a revolt – before the nationalization of coalmines -- against the management when 85 miners lost their lives in an accident. 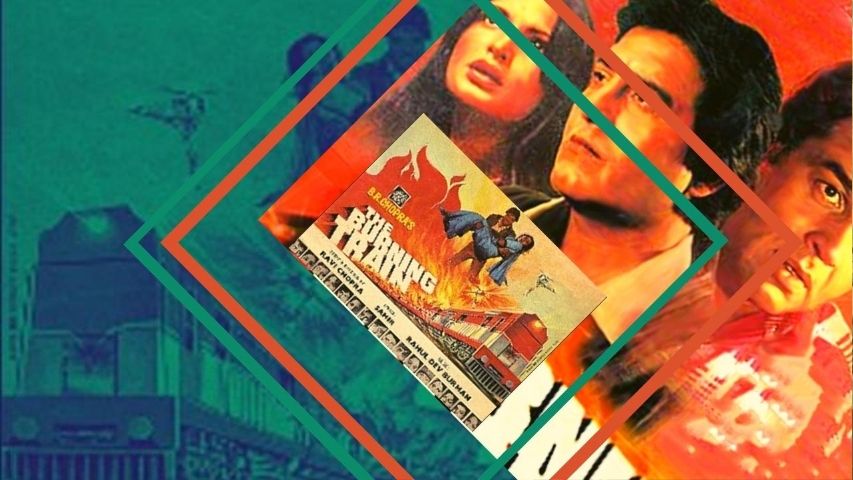 Inspired by the Japanese hit The Bullet Train, the desi version revolves around a dedicated railway employee who nurtures dreams of inventing a Super-fast train and he does. But sabotage by a jealous colleague results in a blast. As fire flames engulf the train, it is up to the motley crew of passengers to save themselves since the engine brakes have failed. A loser at the cash counters, today it has acquired cult status though. Earlier this year, reports stated that a remake is in the works by the grandsons of B.R. Chopra. 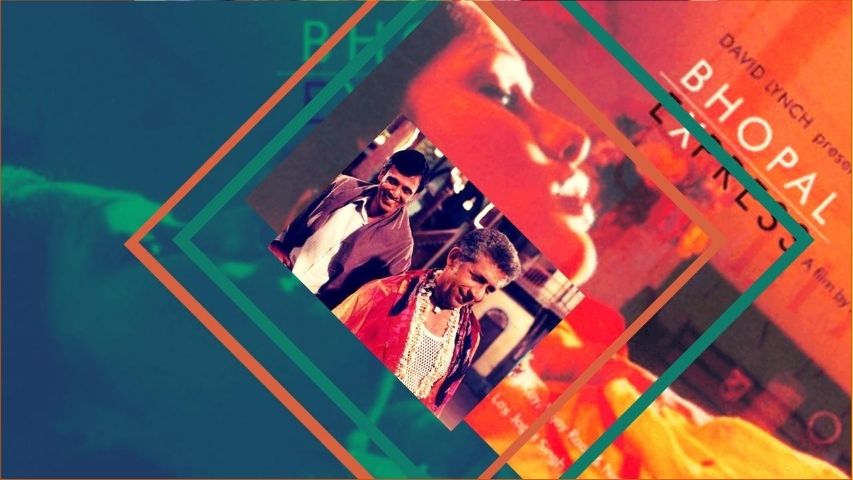 Set against the backdrop of the 1984 Bhopal gas leak tragedy, the human drama examined the irresponsible methods of corporate companies. Poisonous gas clouds from the Union Carbide Factory had spread through 20 kilometres, killing over 8000 people. It also dealt with the aftermath of the leak causing lung ailments and multi-organ failures to lakhs of local residents. The story is told through the eyes of a newly married couple as they try to pick up the pieces to restore their life after the catastrophe. Zeenat Aman essayed the cameo of Zohrabai. Although hard-hitting, this independent feature is barely remembered today. 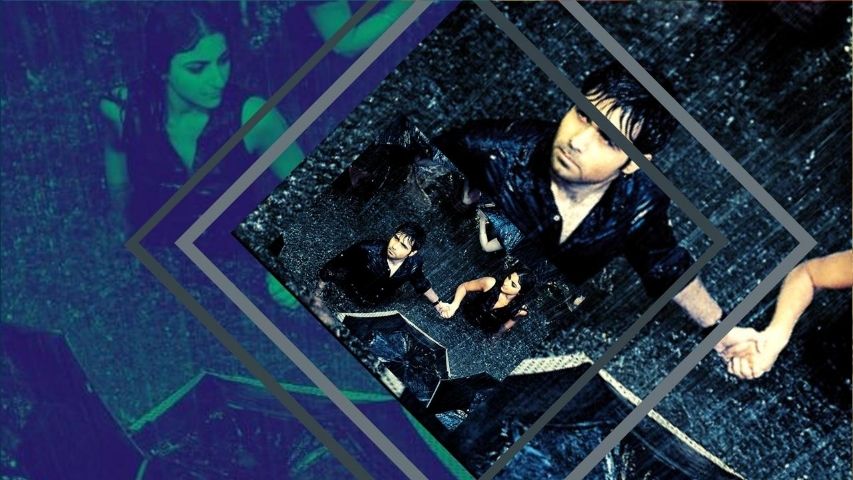 A disaster film with undertones of romance, directed by Kunal Deshmukh, it starred Emraan Hashmi and Soha Ali Khan. Located against the real-life backdrop of the July 2005 rains and floods in Mumbai, the story caromed between the past and present situations. The lead characters, Akshay and Sanjana, are estranged lovers who have moved on in their lives .

A re-encounter is on the way when they get stranded at the airport and have to counter rough weather and the deep waters, which have flooded the city. They are stuck in the heavy rains as they leave the airport and struggle to wade through the deep waters, with death lurking around them. After helping each other to survive, they realize that their break-up six years ago was a mistake. Despite the strenuous, credible performances by both Emraan Hashmi and Soha Ali Khan, it was a commercial no-no. 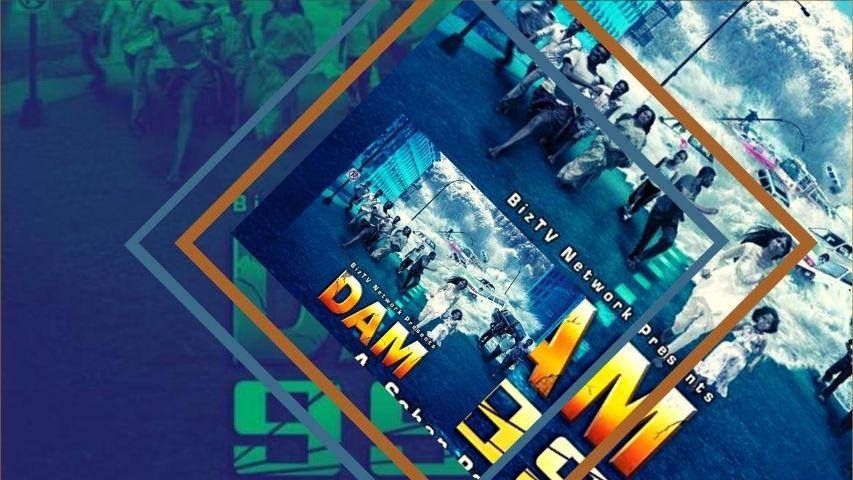 This little-known Hinglish film, an India-UAE joint venture in 3-D, it starred Ashish Vidyarthi, Vinay Rai, Joshua Fredric Smith, Rajit Kapoor and Vimala Raman. Directed by Sohan Roy, the endeavor was based on an award-winning short documentary titled Dams - The Lethal Water Bombs, besides being inspired by the Banqiao dam disaster in China of 1975, which had claimed scores of lives. Stylistically, the attempt was based on the Navarasas or on nine characters portraying varied emotions when caught in a catastrophic dam burst. The principal shooting was done in Alleppey Kerala. 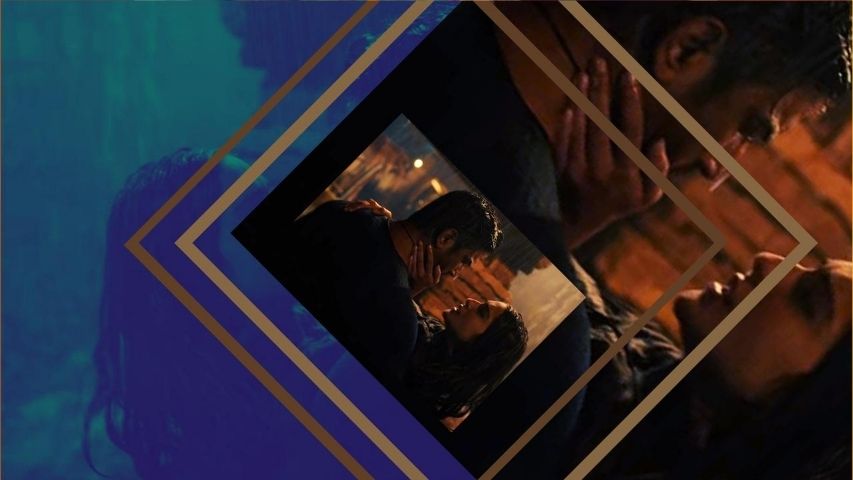 Actor-turned-director Abhishek Kapoor paired Sushant Singh Rajput with debutante Sara Ali Khan in this love story, which underscored the need for secularism. A wealthy Brahmin girl whose family owns various lodges and shops around the historic Kedarnath temple in the mountains of Uttarakhand, meets a local Muslim boy, a porter, in the scenic locales.

Their burgeoning relationship faces hurdles from the Brahmin girl’s family. Next: cut to the rains and floods of 2013, which devastated the area in and around the temple. The couple is forced to combat the forces of nature, which proves to be their ultimate test of love. Kedarnath did reasonably well at the ticket counters while the lead pair were appreciated for their performances. Also the disaster scenes were recreated and photographed competently. 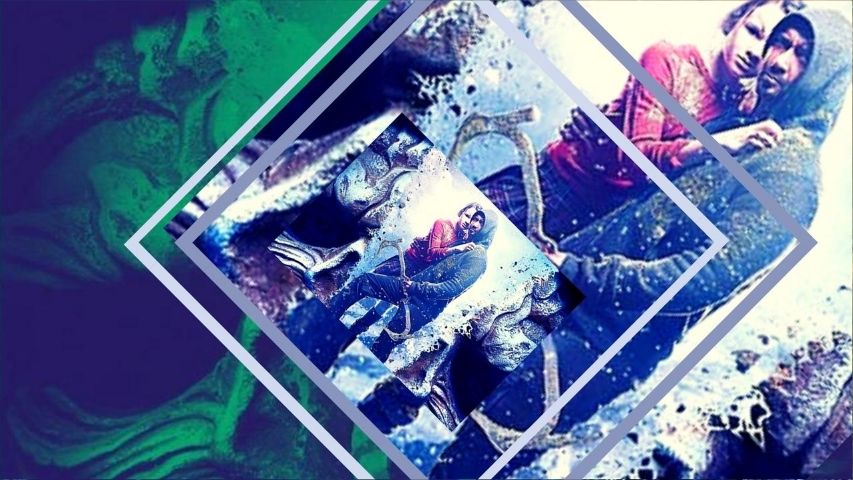 Directed, produced and enacted by Ajay Devgn, here was a story of a skilled mountaineer who races against time to rescue his mute daughter from the clutches of human traffickers in Bulgaria. The plot line may have been predictable but the film was worth a watch for the sequence showing an avalanche, and the mountaineer and his mute daughter trying to flee from the troubled spot against all odds.