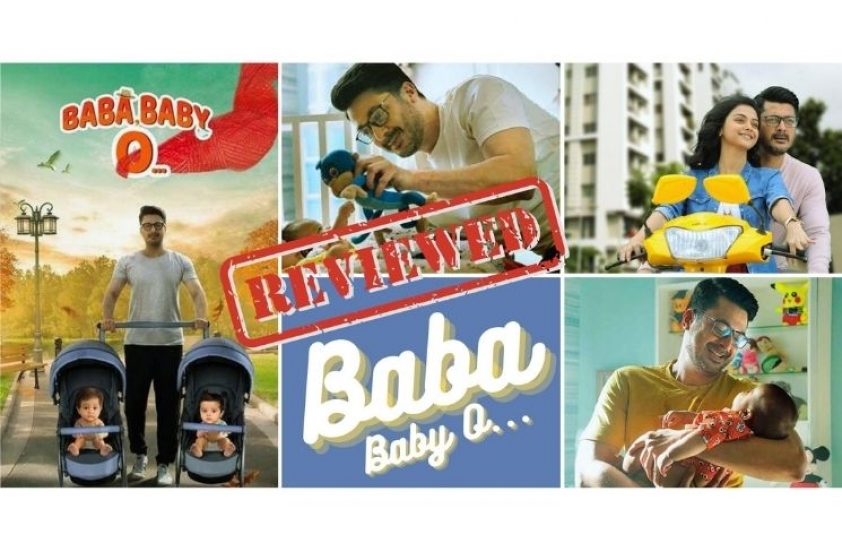 From surrogacy to single parenting to a May-December romance, Aritra Mukherjee’s film is a classic case of too many themes going nowhere, writes Shantanu Ray Chaudhuri

This I will grant, filmmaker Aritra Mukherjee and writer Zinia Sen. They have managed to cram in one-film issues that could provide the content for at least five. Baba, Baby O… begins with what looks like a take on surrogacy but it’s not quite that. Then briefly it appears to be a tale of single parenting, father in this case, but the film jettisons that as quickly as it does the surrogacy bit. There’s a narrative strand involving the hero’s gay friend, which creates a little bit of a drama before the film veers off into May-December affair territory, ultimately settling for a nod to aspects of parental love in amorous relationships.

Megh Roddur (Jisshu Sengupta) has just turned forty and decides to go the surrogacy route to become a father. Never mind that single men and women in India can no longer become parents through surrogacy, thanks to the new Surrogacy (Regulation) Bill, 2020. His parents are shown to be progressive enough to accept his decision, though it does not stop his father from having doubts about Megh’s sexual orientation given his closeness to his male friend, Raja (Mainak Banerjee).

Meanwhile, Megh meets toy storeowner Brishti (Solanki Roy), this is the kind of film where if the hero is called Megh Roddur (Bengali for cloud sunshine), the heroine has to be Brishti, or rain, and is instantly smitten by her.

Things get complicated as, first, Megh realizes that Brishti hates children and then it transpires that she is already in a relationship with Souvik (Gourab Chatterjee), who arrives from Sydney to take her back with him. There’s also the matter of Bristhi’s problematic relationship with her mother (played with characteristic nuance by Bidipta Chakraborty), which provides yet another thread to the films already bursting-at-the-seams plot points.

Needless to say, with so many aspects in the air, none of these get sufficient attention and the film ends up with the classic ‘too many cooks’ syndrome. The potential for conflict in the Megh-Bristhi-Souvik triangle is never realized given Souvik’s one-dimensional characterization, contrasting Megh’s too-good-to-be-true empathetic gentleman. Also undermining the film is the rather tasteless strand involving Megh’s father’s doubting his sexuality, which plays out like unpalatable leftovers from K-Jo films such as Dostana or the Kantabai episode in Kal Ho Na Ho. Its intellectual vacuity also comes to the fore in the overdose of 1990s Bollywood references, with Dilwale Dulhania Le Jayenge’s ‘Palat, palat…’ sequence playing out twice over as a barometer of Megh-Bristhi’s love story.

The films of Shiboprosad Mukherjee and Nandita Roy, whose production house Windows Production has produced the film, have a certain TV serial aesthetic about them, and Baba Baby O… is no exception. It is the kind of film where a sequence of a married couple breaking up is underlined with visuals of their child’s playhouse coming apart. They take up themes that resonate with the anxieties of the urban middle class and are firm favorites with the audiences, which is why it isn’t surprising that Baba Baby O… has proved a sleeper hit. When it works, like in Belasheshe, Praktan or Haami, it works well despite the inherent conservatism of their approach. When it isn’t like in Posto or Kontho, it can be tough to sit through. Baba Baby O… veers towards the latter despite Jisshu Sengupta’s understated performance and a string of lovely ditties by Chamok Hasan. But the film’s biggest failing is the way it incorporates multiple themes only to discard them with lip-service homilies.