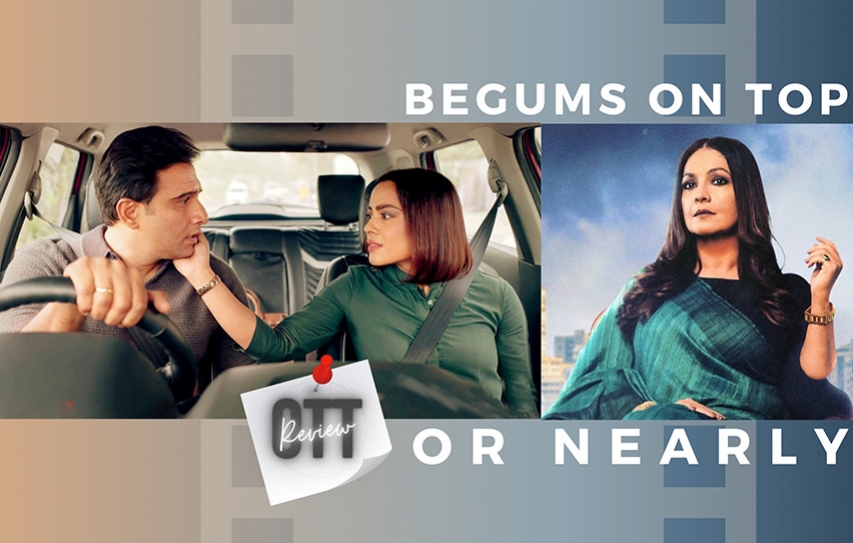 Khalid Mohamed reviews the flawed and yet commendable Begums of Bombay, finds 1962: The War in The Hills far too meandering, and weeps out loud that Indoo ki Jawani is insufferable. 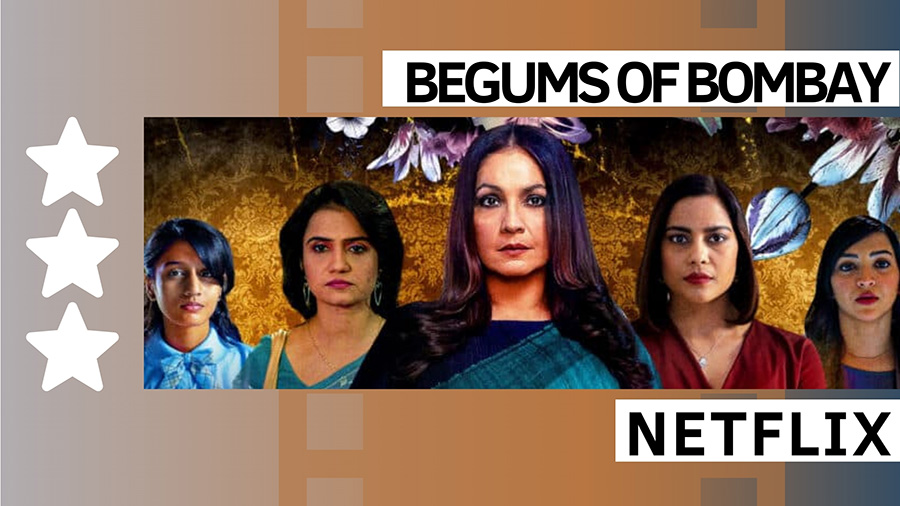 Lord, this one’s a chessboard, complete with a queen, king, knave and pawn, shuffling-‘n’-muffling through that overused word called ‘zindagi’. Sob. It’s a set-up alright, the moves here are as predictable as summer in March, leaving you quite parched-‘n’-starched.

Designed as a women-dominated series, which we do need more and more of today, the six-episodes contrive a run-and-hit road accident (erm, a la White Tiger, unintentionally albeit) and jumps over-the-hilltop with such elements as a newspaper blaring the headline, “Randi ka Beta”. Really now?

Plus, there’s an entirely dispensable voice-over - rather  groan of a drone - by a teenage girl  (Aadhya Anand), which begins to sound like a cricket commentator suddenly grappling with the question: why did Eve and not Adam eat that tempting first apple? Why indeed! The girl sketches kinky images prolifically into a notebook, too, alas concluding with a juvenile portrait of a man and woman in the throes of a torrid kiss. What in the name of art is this?

Oh, oh hold on to your horses though. Begums of Bombay directed by Alankrita Shrivastava (most famously known for the excellent Lipstick Under My Burkha) and Bornila Chatterjee, is certainly not a total write-off. Never mind the plethora of blemishes, the series at its very least, discusses the subject of the #MeToo movement with clarity, emphasises that working women don’t have to depend on male charity, and above all gathers an expert ensemble of actors. Gratifyingly, there’s little male-bashing. The representation of the genders is fairly balanced.

Undoubtedly, the men on display are driven by greed, lust and ego-spasms, but then that’s the way it has been, particularly in the Big Boom BOOM City where promotions, arbitrary diktats and rank sexual exploitation are the norm. The suggestion is that this machismo can’t go on forever. Women, howsoever challenged by  stumbling blocks including a slow-track legal system, the sensation-mongering media (“The nation wants to know!” goes the banshee-like shriek at one point), the humiliating police protocol, and sheer financial haplessness, underscore the reality that women are now mad as hell and won’t take it any more.

Three cheers then  go out to the Begums, for sure, for articulating the fact that the regressive times are a changin’ inchoately. Change, as depicted, is a must to eliminate the toxic workplace environment, especially at the so-called corporate establishments. Something’s rotten in the state of swanky boardrooms and cool carpeted cabins where deals are made and unmade, at the expense of women employees by the wheeler-dealers who can’t help themselves from sending out after-hours sexual feelers. Damn.

So, over to the Queen Bee, pedantically named Rani (Pooja Bhatt), who seems to be deceptively in charge of an upmarket bank, which is hopelessly going down the tubes. Her ploys to rescue it are well-reasoned, but can she execute them without the green light from the upper-echelon’s honchos? At home, her doting husband (Danish Husain) is going fairly dotty, what with two children from an earlier marriage - the notebook artist and her surly brother (played by a Permanent Scowl) who’s always in a self-inflicted hurly-burly. Surly, incidentally, is responsible for that aforecited hit-and-almost-run incident. Result: Royal Rani’s cup of woes, runneth over. Big tsk tsk.

Count among the other Begums, Rani’s expert but often  disgraught assistant Fatima (Shahana Goswami), whose husband (Vivek Gomber) is way lower on the career ladder, and is overzealous about becoming the parent of an IV-induced child. Mercifully, that they belong to different faiths never becomes an issue. Next: She’s not sure though about motherhood, and is seduced suavely by a foreign national. By the way, the directors frequently venture into lovemaking under the bedsheets, and rubbery kissing marathons. Ahoy, how coy!

Next, cut to Ayesha (Plabita Borthakur), who’s kicked like a football between several departments. She engages in major bedsheet ruffling too, is aided by a Nice Guy colleague (Imaad Shah), declares that she’s bisexual, and yaargh has to perform the unspeakable with the bank’s Resident Old Lech (Mahesh Chaudhary). Exasperated, she turns to a website to squelch the crew-cutwalla Lech. About time.

Of the eponymous  living-in-a bubble Begums, also meet Lily (Amruta Subash), who’s the most believable of the group. A sex-worker, she longs to organise a better life for her crippled, knee-high son by blackmailing Ranibai to give her a bank loan for a start-up metal factory, along with her friends from the red-light squalor.

As you might guess, the plot keeps thickening to a brick, the women’s bag of woes make you go oh-no-ouch, till the wrap-up at long last conveys that there could be a tubelight at the end of the tunnel. Aha, a second edition of boardroom chess could be very well on the cards. Honestly, not that one minds, overwhelmingly because of the acting crew, which is first-rate. Of the fringe-line, Vivek Gomber has a striking screen presence. And even the lustoid Mahesh Chaudhary, Imaad Shah, Danish Hussain and Rahul Bose, in a guest appearance, are as life-like as you can get.

Of the lead players, it’s a pleasure to watch Pooja Bhatt’s no-nonsense attitude peppered with moments of vulnerability (note her scenes fussing over the dark shadows under her eyes). Shahana Goswami is bankably first rate, Plabita Borthakur handles a difficult part with super bravado. And quite clearly the alternately fiery-‘n’-icy Amruta Subhash (National Award Supporting Actress winner for the Marathi film Asthu, 2015) as the lovelorn sex-worker is the show-stopper.

Technically fluid, the top assets are the camerawork by Akshay Singh and the  music, with jazz riffs by Gaurav Raina and Tarana Marwah. One grouse with the directors and editors: why do the interlinking shots infallibly show Mumbai’s skyline by night? Every series, desi or international, has made such shots a crashing bore. Snore.

With all its ups and downers, then, do stream into Begums of Bombay. It isn’t flawless by far. But then who or what is nowadays? 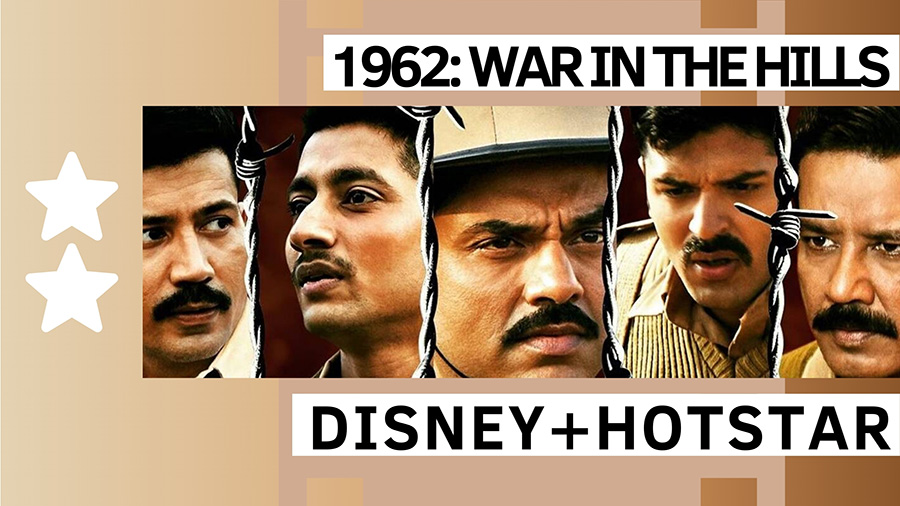 It commences promisingly enough. Abhay Deol re-incarnating the real-life Major Shaitan Singh, war hero of the Indo-China War of  1962. His regiment of 125 had taken on a Chinese assault of over 3,000 combatants.

Zoom into a specific army team on stand-by in Rewa Haryana, to rush to the border. The drama shifts to excruciating physical exercises, internecine rivalries between the soldiers. And there are asides of Pandit Jawaharlal Nehru (Arif Zakaria) procrastinating in New Delhi, with his ministers, frequently being advised for a pacifist approach by a woman who, from all appearances, is a throwback to Mrs Indira Gandhi.

Directed by Mahesh Manjrekar (influenced in no tiny measure by J.P.Dutta), doesn’t stick to the warfield skirmishes in Galwan valley (the battle was fought on a more extensive turf including Arunachal Pradesh). As scripted by Charudutt Acharya the series consequently turns out to be a micro-view of the conflict over NEFA and Ladakh.

There is no gainsaying that military manoeuvres could have made for an arousing chronicle on the Indo-China face-off. Unfortunately, there are far too many schmaltzy sub-plots, which wander towards the gullies and lakesides of the township. Hurray hip hip, we can’t go for the sake of a meandering Raj Kapoor-style Sangam triangular love story. Too much ishq-mushq, I tell you.

That deathly device, the voice-over resorted to usually, in order to cut the beanstalk of the story short, is elocuted with lachrymose nostalgia by the heroic Major’s widow. In the earlier sections, you could have sworn that she was Mahie Gill, but maybe she didn’t wish to go through the old age-drill. Equally unbelievable is a shepherd girl (Rochelle Rao), an enthu-cutlet of a spy for the Indian jawans. She even offers paneer pakwans to distract the Chinese. Clever.

In any case the 1962 recall is too long drawn out for comfort. You watch the battle scenes (VFX galore),  that mush-ado Sangam-hoga-ke-nahin, not to forget a quickie wedding - since Ms Chirpy has found herself to be pregnant. And eureka, a willing stand-in as the groom enters, reminding you of Balraj Sahni in Ek Phool Do Maali. As for the Chinese forces led by a camera-friendly sort actor, he’s straight out of a Bond flick.

Of the performances, Abhay Deol, Sumeet Vyas, Anuup Soni and Akash Thosar are okey-dokey. The rest of 1962: The War in the Hills isn’t. 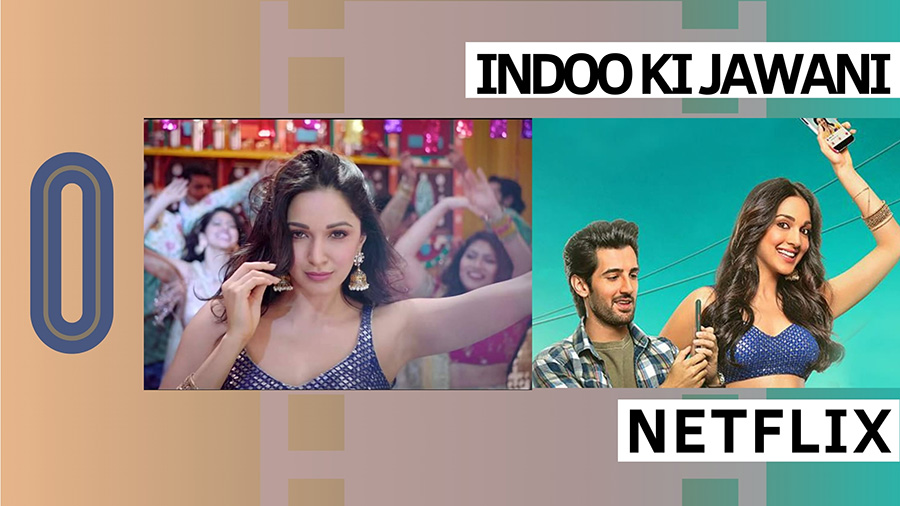 This is a punishment, reminding you of being caned for a prank by a humourless schoolteacher. Why why? If you really must know it’s essentially about the tu-tu-meow-meow exchanged in a studio-created Ghaziabad. Ancient me, ruffians and cheddary Romeos are all running on the same track: sex wanted!

Ergo, the heroine (Kiara Advani), who’s evidently ditzy, is locked in her mohalla house with a blind date discovered on Dinder (help!). The nuts-‘n’-fruits date turns out to be a Pakistani (Aditya Seal) and there they are arguing about the merits and demerits of their countries. One sore point is, why does Bollywood plagiarise Pakistani and global entertainment? Take it from me, you don’t want to know more about the she-and-he-nanigans. ‘Tis as tiresome as a juvenile webinar.

Suffice it to say, Indoo ki Jawani is the WORST cretinous film encountered on an OTT channel, so far. It is directed by one Abir Sengupta and co-produced by Nikkhil Advani.  HOWL, GROWL, how I felt like slapping myself for wasting my time, stamina and electricity units.