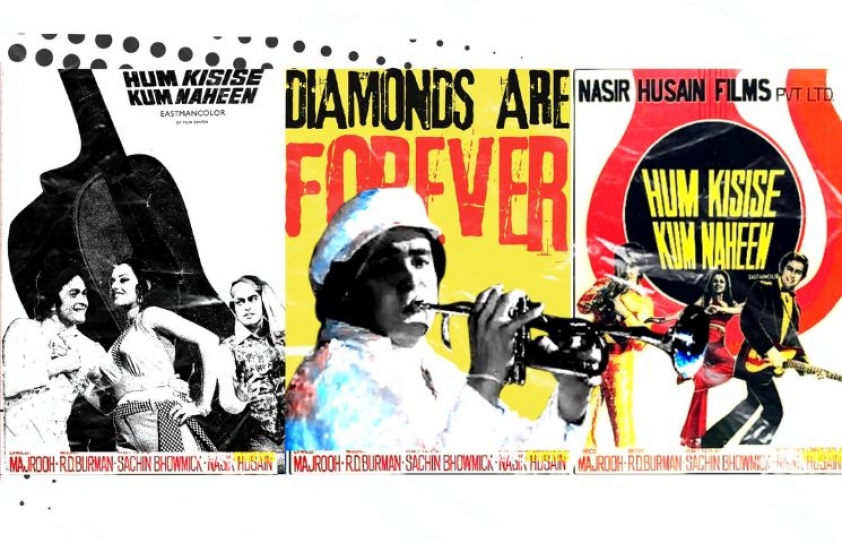 Rishi Kapoor’s 69th birth anniversary on September 4 was an apt occasion to revisit one of my favorites and his most well-remembered musicals Hum Kisise Kum Naheen.

Nasir Hussain had commenced making films during the era of the greats: Mehboob Khan, Guru Dutt, Bimal Roy, V. Shantaram and Raj Kapoor, B.R. Chopra and Yash Chopra. Yet Nasir Husain had his own legible signature as a master of unalloyed entertainment, best known for his musicals. So, here looking back at his entertainer Hum Kisise Kum Naheen, which recently completed its 45th year of release; it was released on 25th August 1977.

His oeuvre was targeted at teenagers and budding lovers, and not for the classes or the critics. His films were modern with a westernized touch. His song sequences spelt style and grandeur and were known for their feather-light picturizations. He was fond of staging picnic scenes, would weave in light banter among the hero and the heroine, and would add a comedy track, quite often with the funster Rajendranath.

Hum Kisise Kum Naheen kicks off with Rajesh receiving a letter from his father informing him about diamonds, which are hidden in a belt, against the sale of all his assets due to an imbalance in the African markets. While on his flight to India Rajesh’s father suffers a massive heart attack and requests his fellow passenger Kishorilal (a businessman) to hand over the belt to his son, who works as a singer at Ashoka Hotel in Delhi. 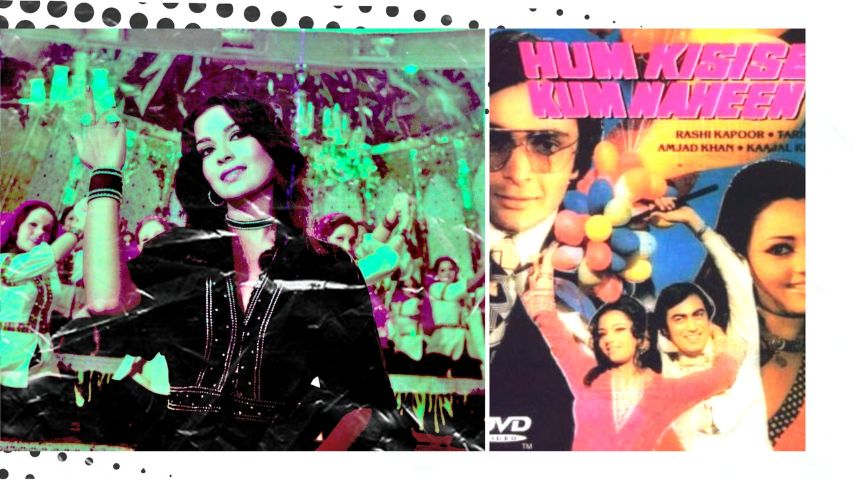 On landing in India, Kishorilal is chased by goons who are after the diamonds. He finds shelter in a shed where he hides the belt in a tool box of a bicycle. The bicycle belongs to a local, Sanjay, who takes it away before Kishorilal can see his face to recognize it later.

Soon, Rajesh is visited by Saudagar Singh and Banjeet Kumar Dana, the goons - they fabricate a story of seeing his dying father handing over the belt to Kishorilal. According to them Kishorilal is not a businessman but a notorious smuggler. They also state that Kishorilal has kidnapped Saudagar Singh’s son and is holding him hostage to demand ransom. They successfully convince Rajesh to be a part of their plan to kidnap Kishorilal’s only daughter Kajal in exchange of Singh’s son and his father’s diamonds.

In accordance with their plan, Banjeet Kumar Dana introduces Rajesh as Manjeet Kumar Dana (his Richie Rich son) who has fallen in love with Kajal after seeing her photograph in the local newspaper of winning a beauty pageant. Next, Kishorilal impressed with Rajesh’s affluence and status arranges a meeting between Rajesh (in alias) and Kajal.

On the other hand, Sanjay, a local mechanic sees Kajal’s photos in the local newspaper and realizes that she his childhood sweetheart. Their fathers had resolved to get the two of them married when they came of age. But today, things have changed: Kishorilal has become a big businessman while Sanjay and his father Ram Kumar are less fortunate.

Kajal soon shows up to meet Rajesh, as Manjeet, at his house, but is welcomed by Sanjay who grabs the opportunity to identify himself instead as Manjeet. The two end up spending the day together and Kajal is drawn towards him. She confesses to Sanjay of being in love with her childhood friend whom she hopes to find someday. The very next day when she arrives at the mansion, she is greeted by Rajesh who introduces himself as Manjeet while Sanjay happens to be merely a manager. Feeling furious and deceived, Kajal freezes him out, denying him any chance to disclose the truth of him being her childhood buddy. 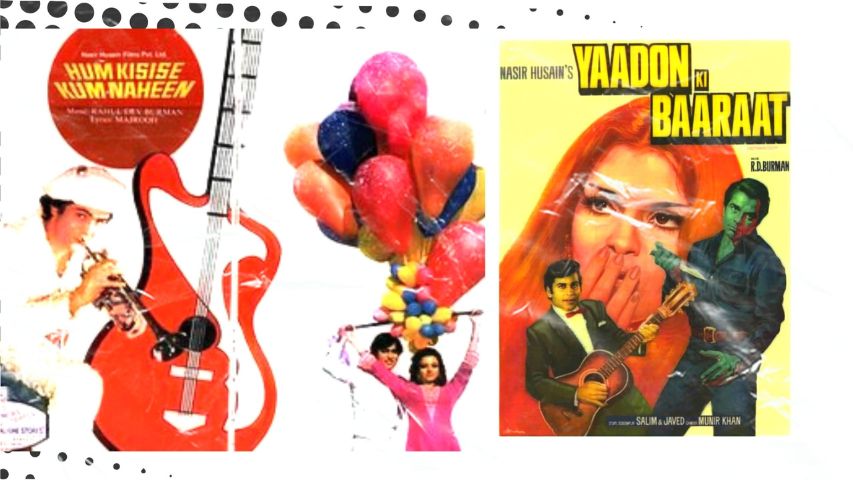 Rajesh remains uncomfortable and often suffers from guilt pangs. Kajal, too, feels rather cramped since she is attracted to Sanjay who is always around. But it’s too late for Rajesh to back out of this plan as now his sister, Mala, is being held hostage by Saudagar Singh. The only way to rescue her is to hand over Kajal to them.

Kajal by now knows that Sanjay is her childhood sweetheart. Meanwhile, Sanjay, who has accidentally met Mala in the past, helps her out to get away from her kidnappers and to return home safe and sound. He soon joins Rajesh to expose the ‘real’ gang of smugglers.

Hum Kisise Kum Naheen was a long-awaited film after the smashingly successful Yaadon Ki Baaraat (1973) from Nasir Hussain. Again, there were many common points between the films. They were both multi-starrers and colorful musicals. Both the films had superlative music by R.D. Burman, which was also one of the major reasons for their success at the ticket counters. His scores set the trend for disco music in Bollywood cinema.

Director Nasir Hussain introduced Sunita Kulkarni as the heroine, rechristening her as Kaajal Kiran. He also cast his own nephew Tariq, who was given a meatier role this time. All he had to do in Yaadon Ki Baaraat was to strum the guitar. Even his lines in the popular song Aap Ke Kamre Mein Koi Rehta Hai were spoken by Kishore Kumar. It is said that Vijay Arora who was in Yaadon Ki Baaraat was upset for not being cast in Hum Kisise Se Kum Naheen. But Hussain explained to him that he was keen to cast his nephew in an author-backed role of a quintessential hero and also needed a more saleable actor to carry the film forward hence he had chosen Rishi Kapoor as the hero. Arora understood his dilemma and backed off.

Hum Kisise Kum Naheen remains the only film in which Rishi Kapoor was paired opposite Zeenat Aman. Even though she was only a couple of years older than him, she was considered too mature to star opposite him. She was also a little taller than him, therefore there were no scenes shot showing them standing together. Zeenat Aman and Ajit were credited with ‘special appearance’ tags. They were surprise elements much to the audience’s delight. Nasir Hussain was fond of Zeenat Aman and created the cameo specially for her. 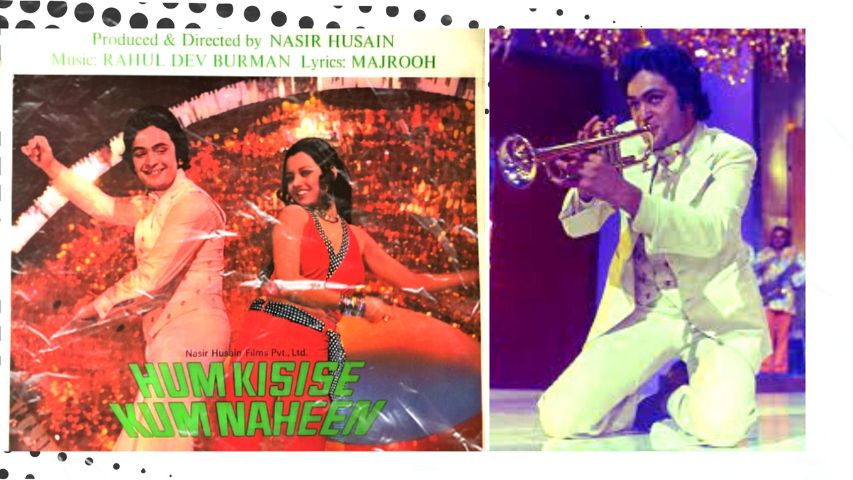 Traditionally, lengthy song sequences were normal in most of Nasir Hussain films, be they Teesri Manzil (1966), Pyar Ke Mausam (1969) or Yaadon Ki Baaraat (1973). It is said that, while shooting in London, Nasir saab had visited the Tiffany’s club where he heard several songs played randomly together making it one song, one disco track succeeding another.

He requested R.D. Burman to create something similar. Pancham Da known for being experimental thus created a compilation song but was unsure about the audience’s reception to it. Finally, when the medley played in the film, it was an instant chartbuster. Another highlight was the title track qawwali, Hai Agar Dushman, shot on Rishi Kapoor and Zeenat Aman. Other songs like Kya Hua Tera Vaada and Ye Ladka Hai Allah Kaisa Hai Deewana remain timeless. Singer Mohammed Rafi won the trophy for the Best Playback Singer (male) at the 25th Filmfare awards for Kya Hua Tera Vaada.

Hum Kisise Kum Naheen was one of the biggest hits of 1977, after which Nasir Hussain launched one of his most ambitious multi-starrers titled Zabardast. It was to feature Dilip Kumar, Asha Parekh, Dharmendra, Zeenat Aman, Rishi Kapoor, Tina Munim, Kajal Kiran, Tariq as the leads along with Kadar Khan, Sharada and Amjad Khan in pivotal roles. However due to creative differences with Dilip Kumar, after shooting a few reels, Nasir Hussain shelved the project.

Kajal Kiron blamed Rishi Kapoor for the failure of her career since they never worked again together. This was her first and last film with her mentor, the producer-director. This was also the last film of Tariq in the main lead. As it happened Hum Kisise Kum Naheen was the last blockbuster film for the production banner of Nasir Hussain. His next Zamane Ko Dikhana Hai (1981) received a poor response at the box-office. Today, Hum Kisise Kum Naheen, a jewel of a musical, can be watched for those who seek pure entertainment again on Zee5.