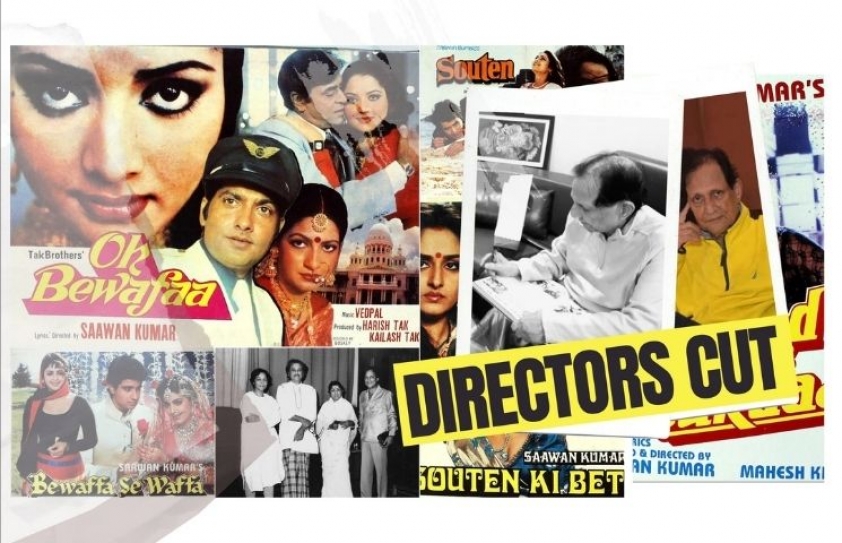 Film historian, Dhruv Somani, is in conversation with Saawan Kumar Tak, on how he has romanced the box office.

He has donned many hats - a lyricist, producer and a director, who gave us some super successful films and songs through Hawas, Sajan Bina Suhagan, Saajan Ki Saheli, Oh Bewafa, Souten, Sanam Bewafa, Chaand Ka Tudkaa to name a few.  He has also given breaks to upcoming actors like Sanjeev Kumar, Mehmood, Padmini Kolhapure, Radhika Bartake and Chandni.

Usha Khanna composed his hit music scores. The director and he had married but when they parted ways after a brief while, it didn’t affect their professional relationship. Despite his track record of hits, though, Saawan Kumar Tak was never considered as an A-list director. He doesn’t sound bitter about that while age is just a number for him. So, as he turns 85 on 9th August, here’s his story in his own words.

As a young boy from Jaipur, I landed in Bombay with dreams of becoming an actor. Struggling for days, I happened to see a film shooting of Bimal Roy. I was fascinated to see him giving instructions to a top star like Dilip Kumar. This incident made me take a decision towards direction.

I began as a producer with Naunhilal (1967), in which I cast Haribhai, I changed his name to Sanjeev Kumar, with Balraj Sahni and Indrani Mukherjee in the lead roles. The film did not do wonders but I got a lot of appreciation for it from Prime Minister Indira Gandhi who was touched by the film’s songs penned by Kaifi Azmi.

I turned director with Gomti Ke Kinare (1972) starring the tragedy queen Meena Kumari and Jalal Agha. Gomti Ke Kinare progressed well until Meenaji fell ill from the sixth reel onwards. She had a liver issue and would often vomit blood on the sets. I was dispirited but she was always willing to go the extra mile forward. Besides becoming like a mother to me, she was my guide and my guru in all ways. Her photographs are the ones I keep at home. Gomti Ke Kinare was Meenaji’s last film unlike Pakheezah as people think.

In Hawas (1974), I tried a very bold subject for those times and cast the good-looking and dashing Anil Dhawan opposite a much younger Neetu Singh. The songs became very popular, especially Teri Galiyon Mein sung by Mohammed Rafi Saab. Binduji essayed one of the boldest roles of her career, that of a nymphomaniac, Kamini, who truly stole the show. Rekha was also featured in one of the songs as a dancer while Vidya Sinha did a cameo in the film before she was seen in her debut film Rajnigandha. 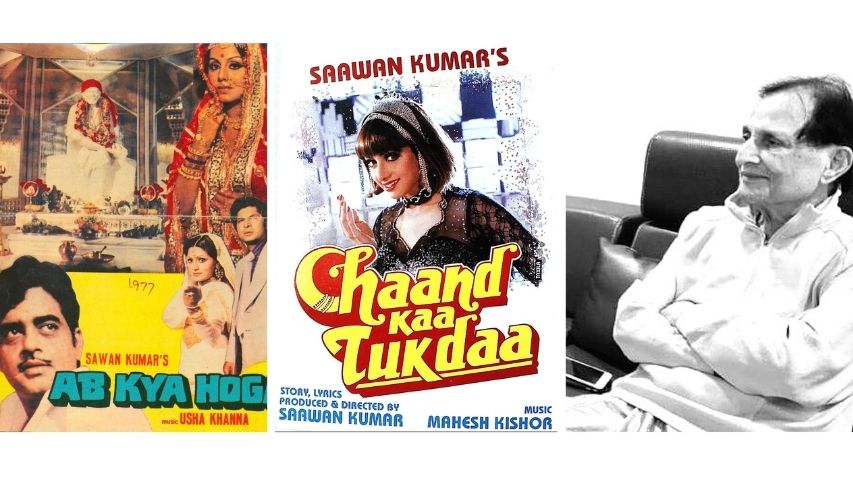 It was with Hawas that I began writing songs. I had gone to a top lyricist but when he quoted a huge sum of money, I walked out in a huff, thinking to myself, “Ab teri galiyon mein na rakhenge kadam aaj ke baad.” That’s how the song was born. I roped in Usha Khannaji to give the music. Eventually, Hawas did very well at the ticket counters.

With Ab Kya Hoga (1977), I tried to make a suspense film inspired from Alfred Hitchcock’s Vertigo. It starred Shatrughan Sinha, Neetu Singh, Bindu and Asrani. It did well at the ticket counters and its music by Usha Khannaji was again appreciated so were the performances of the lead cast.

Sajan Bina Suhagan (1978) was the film with which my dream of working with Nutanji came true. I always held her to be a complete actress and hence approached her. I also approached Rajendra Kumar who had no films at that time. He happily signed my film and there was no looking back as his character role, which was widely praised. The film was a bumper hit at the box-office. He went on to three films in all with me. I cast the very young Padmini Kolhapure along with the promising newcomer Radhika Bartake (World Teen Princess) and rechristened her as Kasturi. She looked quite like Kangana Ranaut actually - a nice girl settled in Goa today. The film had superlative music and celebrated a silver jubilee at the cinema halls but it was Nutanji who stole the show with her sensitive portrayal of Mrs. Asha Chopra.

Oh Bewafa (1980) was a revenge drama, inspired by Sidney Sheldon’s book The Other Side of Midnight, starring Anil Dhawan who truly looked handsome in air force uniform opposite Yogeeta Bali and Nazneen. He played a Casanova. Here again Rajendra ‘Jubilee’ Kumar played an author-backed role, which he did full justice to.

The lead cast of Saajan Ki Saheli (1981) comprised Rajendra Kumar, Nutan, Vinod Mehra and ‘the’ Rekha who was riding on the crest of success. What more could I have asked for? I had scored a hit again, in no small measure because of its chart-busting music. This was my third film with Rajendra Kumar and my first one with Rekha. Contrary to rumors, Rekha was a delight to work with - she was hardworking and very co-operative. I eventually managed to do five films with her. She would do a film with me even today.

For Souten (1983) I had approached Rajesh Khanna. He gave me his diary and told me to fill in whichever dates I needed. I had signed Parveen Babi to do this film initially but when she vanished into thin air, and I replaced her with Tina Munim. I was very happy with my decision and her performance as well.  I’d already worked with Padmini Kolhapure as a child artiste in Saajan Bina Suhagan. 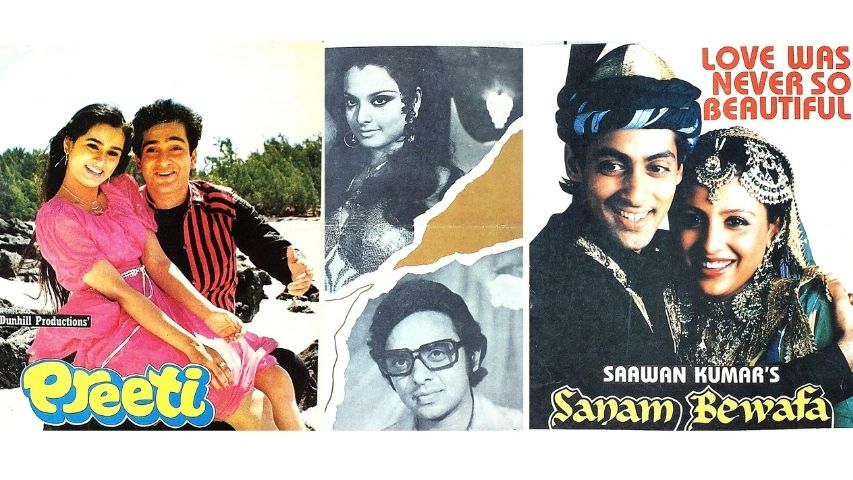 Incidentally, Souten was the first Bollywood film to be shot in Mauritius. After its success, others too flocked there. I had signed my friend Prem Chopra as the villain; we had mutually decided on a recurring line of dialogue for him. That line, “Main woh bala hoon jo sheesha se patthar ko todta hoon”, became quite a craze.

The music, once again, by Usha Khannaji, played a key role in its success. Shyaad Meri Shaadi Ka Khayal, was a song written by me out of the blue. We worked together as a team; she would compose songs from her ‘dil’, while I wrote the lyrics from my ‘dimaag’. Call it luck or taqdeer, our combination worked well. We still keep in touch. Souten was a big hit and brought back Rajesh Khanna into the limelight as he signed many films thereafter.

Trends had begun to change, as action films had become the flavor of the season. I directed Laila (1984), with Sunil Dutt, Anil Kapoor, Yogeeta Bali, Poonam Dhillon and Pran but the audience rejected this action love story. Next there was Preeti (1986) with Padmini Kolhapure and Rajiv Kapoor, which fared averagely. Unfazed, I made Pyar Ki Jeet (1987) with Shashi Kapoor, Vinod Mehra and Rekha, which was delayed in the making and therefore did average business. I felt the need to return to emotional subjects, which were my forte.

So I made Souten Ki Beti (1989), which was an emotional story with a bold underlining. It starred my dear friend Jeetendra, with Rekha and Jaya Prada who were supported by Sumeet Saigal and a new girl, Dipinti. This film did well while its music by Ved Pal clicked too. Originally, I had cast Rajesh Khanna, Tina Munim and Jaya Prada as leads but that went for a toss when Kaka and Tina split. I was supposed to launch Shilpa Shirodkar in this film but she broke the contract and signed other projects.

Salman Khan was the rising star when I made Sanam Bewafa (1991). All I did was call him over to my office and make him hear the songs I had written. He loved what he heard and was raring to start the film at earliest. I had signed a new girl, Rukhsar, but due to some misunderstandings after the mahurat, she dropped out. Within no time I had my cast ready as I signed three newcomers: Chandni, Kanchan and Tahira Khan with a strong supporting cast of Pran, Danny Denzongpa, Puneet Issar, Pankaj Dheer and Dina Pathak. Sanam Bewafa took the box office by storm, so I was back in the reckoning as a hit-maker. Its songs are loved till this day. 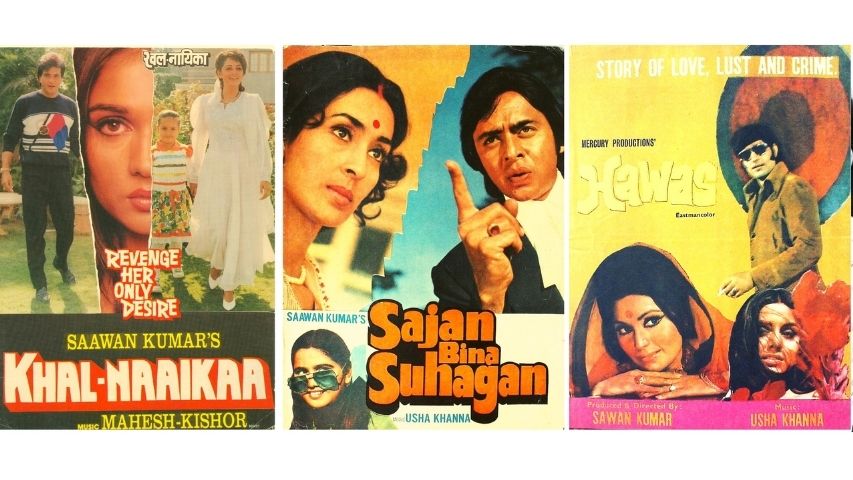 Damp Squibs: I made a Muslim social, Bewaffa Se Waffa (1992) with Vivek Mushran, Juhi Chawla and Nagma, which did not do great business even though its music was popular. Though initially Neelam was to do the film opposite Ayub Khan, things didn’t work out, hence I changed the casting. Prem Daan (1992) too, with Nitish Bhardawaj and Khushboo flopped. At the same time, I was working on Chand Ka Tukdaa (1994), which was delayed because of the hectic schedules of Salman Khan and Sridevi. It had a decent run at the box-office.

Khal Naaikaa (1993) was inspired by Hollywood’s The Hand That Rocks the Cradle. Though there were rumors about talks of Rekha being approached for the role, as far as I remember Anu Agarwal was the original choice. Anu was a thorough professional. Even during some of the intimate scenes she never fussed. The film landed into a controversy since Khal Naaikaa and Subhash Ghai’s Khalnayak were released at a short interval and both had a controversial song on the choli. Be that as it may, Khal Naaika was a hit.

I made other films like Sanam Harjai (1995), Salma Pe Dil Aa Gaya (1997), Mother (1999), Dil Pardesi Ho Gaya (2003) and Saawan – The Love Season (2006). Of these Salma Pe Dil Aa Gaya, starring Ayub Khan and Saadhika Randhawa fared well. In between I had gone away to Hollywood for around two to three years where I did try to make films but things did not materialize. I was staying in Beverly Hills and spent a lot of money. Also, I am very desi with an Indian mindset somewhere. I had to return home.

I had certain health issues, which have now been sorted. I have been ready with a fantastic script. I am open to offers to do something for the OTT platforms, which have become a rage covering a wider audience. A filmmaker can never hang up his boots.