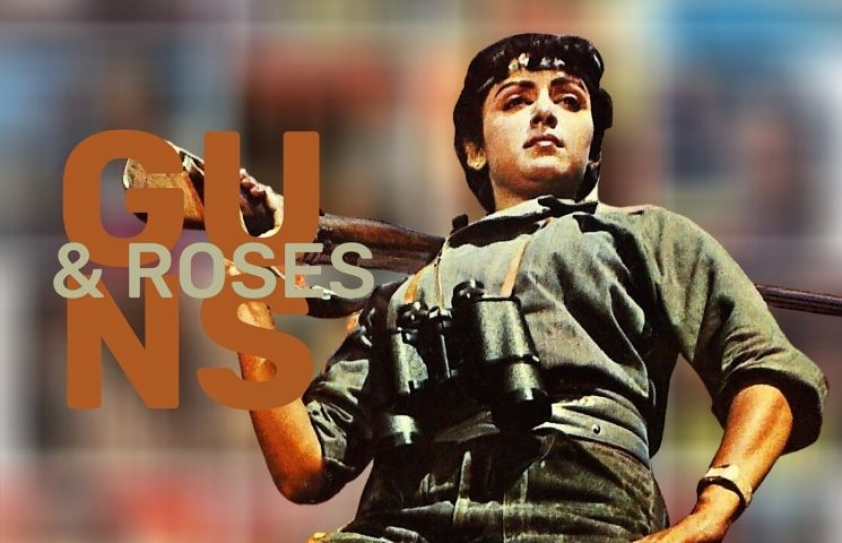 Film historian Dhruv Somani reminds you of the time when women characters wouldn’t take nonsense from the Thakur potentates and became dacoits to wreak vendetta.

Over time, Bollywood has belted out so many films on bandits. Most of us may not have met a daku in real life. Whatever we can figure out about them has been from our prolific film factory.

We have always imagined dacoits to be ruthless hairy men with tobacco-stained teeth. During the late 1950s and ‘60s, dacoits – mostly placed in the Chambal valley in north-central India - wore traditional dhoti-kurtas and then moved on to safari suits or baggy shirts and trousers, largely green in color, to camouflage themselves in the dense jungles.

Later on, the color worn by them became black to give the dacoits a dark, devilish edge. The most well-remembered among dacoit movies have been Mujhe Jeene Do (1963), Ganga Jamuna (1961), Mera Gaon Mera Desh (1971), Ganga ki Saugandh (1978), Daku aur Jawaan (1978),  Dacait (1987) and the grand-daddy of them all Sholay (1975) whose Gabbar Singh became an iconic figure. The dacoit was always an anti-hero of sorts, driven to pick up the gun when pushed to the edges by avaricious upper classes.

Today, I turn to bandit films in which women - leading ladies - took over the parts of sardar dakus. If men could be tough, women were no less. There was a point in the late ‘80s and early ‘90s when every heroine would aspire to portray a kickass bandit waiting to wreak revenge on wrongdoers.

I have short-listed some heroines in Bollywood of that era, who rode on horses, brandished whips and guns and pounded male bozos to pulp. In the age of the “angry young men”, women could also loose their cool and combat an unjust social order.

Hema Malini played a double role of twin sisters separated at birth and unaware of each other’s existence. While one sister becomes a dancer Ramkali, the other is Daku Raksha who’s hell-bent on teaching the cruel village landlord, Thakur Shamsher Singh, the lesson of his life. She was paired opposite Shatrughan Sinha. 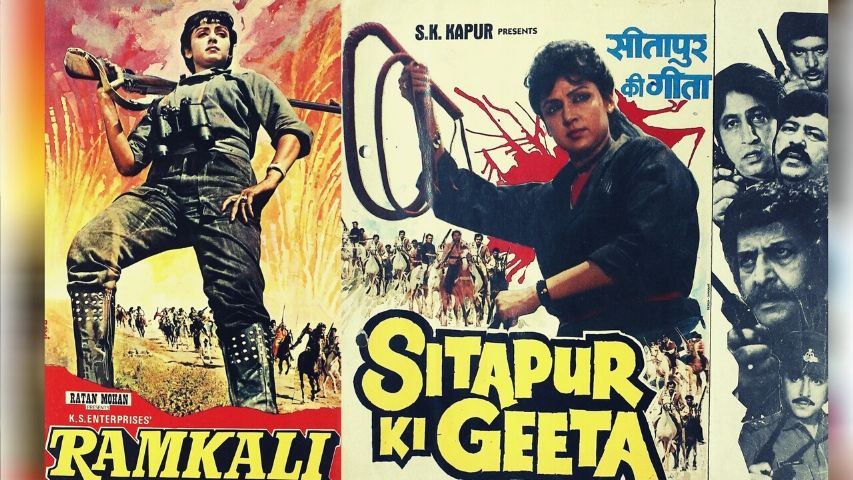 An impoverished farmer raises his two children Karan and Geeta. Circumstances lead them to Sitapur village where Geeta decides to work so she can earn a proper education for her brother Karan who is keen to become a police officer. Once he does, Karan is assigned duty to get rid of the bandits wreaking havoc in the village, completely ignorant of course, of the fact that he has to confront his own sister who has assumed the pseudonym of   ‘Maut’.  Rajesh Khanna made a cameo appearance.

An Indo-Russian venture based on the Sohni Mahiwal fable, Umesh Mehra and the Russian director Latif Faiziyev helmed this film jointly, after their successful collaboration, Alibaba Aur 40 Chor. Poonam Dhillon enacted the title role with Sunny Deol. Zeenat Aman, Pran, Tanuja, Gulshan Grover and a team of Russian actors supported them. Indeed after the stupendous success of Alibaba Aur 40 Chor, Umesh Mehra on the insistence of the Russian team, created a special part for Zeenat Aman as Bandit Zarina who comes to the rescue of the star-crossed lovers Sohini and Mahiwal. The lavishly mounted love story-cum-actioner was a success, in no small measure because of a song-and-dance number performed by Zeenat Aman. 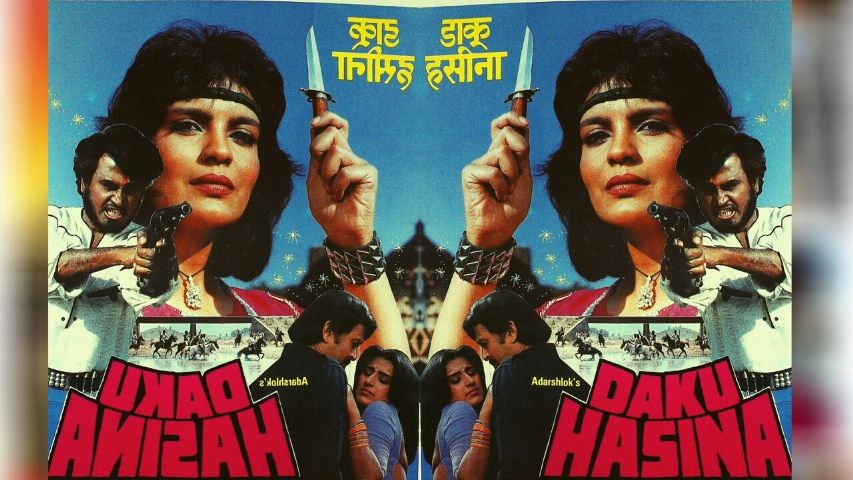 Roopa Saxena, a feisty village girl has big dreams and lives her life on her avowed principles trying to help her villagers lead a peaceful life. But she is abducted by the dacoit Durjan who wants to present her as a ‘gift’ to the local leader Raja Saab and his cohorts. She is brutally raped while her parents are killed. Traumatized, she is helped by the kind-hearted bandit, Mangal Singh, who takes her under his fold and names her Daku Hasina. Now she longs to avenge the death of her parents, while police orders are out to nab her ‘dead or alive’. Despite the inclusion of superstar Rajinikanth, the roughly hewn outcome nosedived at the ticket windows. 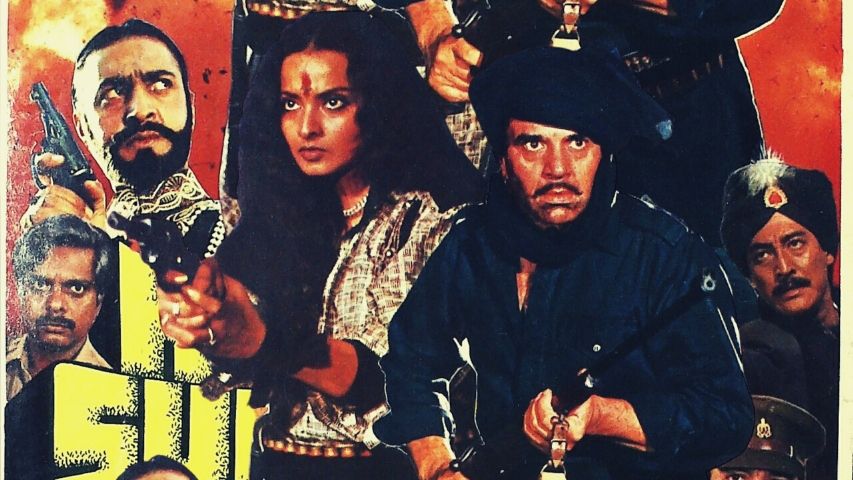 Rekha played the role of Surajmukhi, a courtesan, for the umpteenth time. She comes under the protection of dacoit Suraj Singh and they marry and become parents. Next, she persuades him to surrender to the law for the future of their child. Suraj Singh finally accepts her plea and surrenders, not knowing that instead of the police it is the lackeys of the village’s Thakur who’re set to gun him down. The plot thickens. The district’s Thakur rapes Surajmukhi. She vows vendetta but eventually becomes a target of bullets fired by the police.  The script was far too hackneyed to attract audiences to the cinema halls.

Directed by Keshu Ramsay, here was a revenge track again. A fun-loving girl, Bijli, is forced to take the law in her own hand to deal with her oppressors.  Dimple was the main protagonist with Kabir Bedi, Navin Nischol, Prem Chopra and Danny Denzongpa. Bijli after witnessing the killing of her family members, is challenged by dacoit Changeza and the local Bhurelal.  Consequently, she is trained in different forms of martial arts to prove that women can be as physically tough as the millions of vicious men.

Char Chaudhary revels in looting and killing.  Birju whose sister has been raped and Sheru whose mother has been wronged, form a counter force with Durga who has a twin sister called Shanu, a professional dancer who has been abducted by the Chaudhary’s henchmen. Produced by Pahlaj Nihalani and directed by Shibu Mitra, it paired the relatively young Chunky Panday (sporting a moustache) with the gorgeous Dimple Kapadia in a double role, and also featured Shatrughan Sinha. The formidable line-up of baddies included Prem Chopra, Shakti Kapoor, Ranjeet, Gulshan Grover and Danny Denzongpa. The unapologetic formula film was a no-no with the audience. 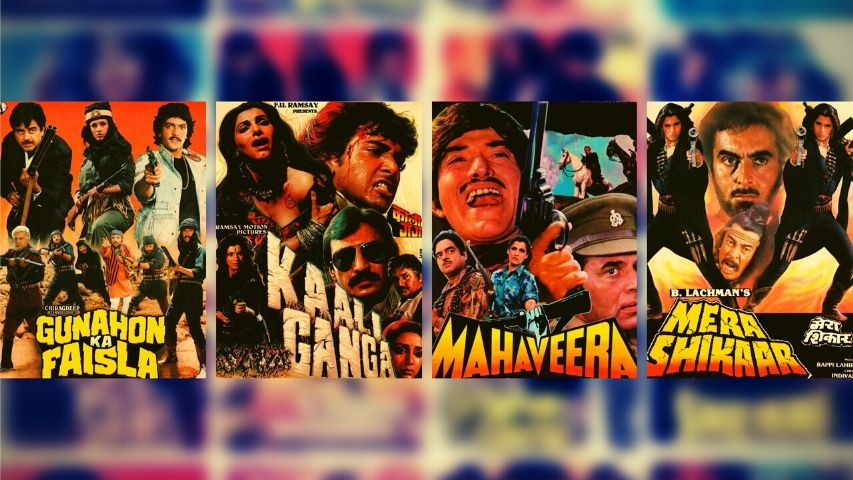 Directed by Naresh Saigal, the multi-starrer packed in the acting crew of Dharmendra, Raaj Kumar, Shatrughan Sinha, Raj Babbar, Vinod Mehra, Dimple Kapadia, Salma Agha and Anita Raaj. The plot dealt with Dolly, a victim of circumstances, who becomes a dacoit to settle scores with Thakur Sher Singh and Thakur Amrit Singh. Meanwhile, her brother Deepak becomes a police inspector who must track her down as in the line of duty. The hefty star cast couldn’t save the outcome from being declared a disaster.

Directed by Raj N Sippy and produced by Kumar Ramsay, here was a typical dacoit film in which the heroine is oppressed by the cash-rich Hukumchand. Dimple Kapadia played the title role in the company of Suresh Oberoi, Anooradha Patel, Prem Chopra, Gulshan Grover, Tej Sapru and Govinda. The project was accepted by Govinda way before his two hits in 1986 (Love 86 and Ilzaam). The film was delayed because Govinda kept postponing the shooting under some pretext or the other. Released in 1990 finally, it performed averagely. 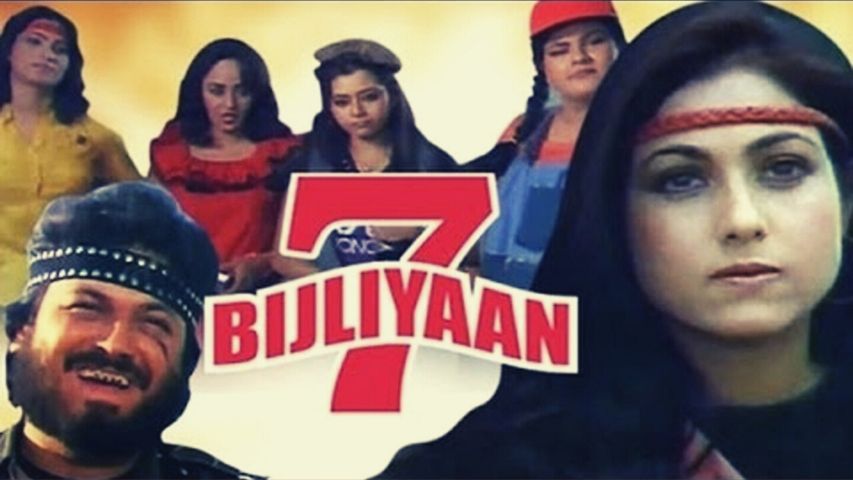 As the name suggests, director Raj Saigal’s 7 Bijliyaan was an account of seven young women who have all suffered torture, physical abuse and harassment from zamindars and thakurs and a dacoit named Cheetah. The victims headed by go-getter Bijli form their own gang of dacoits and take the evildoers to task. Besides Tina Munim, the female cast comprised Surinder Kaur, Shoma Anand, Neelam Mehra, Kaajal Kiron and Guddi Maruti who were supported by Raj Kiran, Suresh Oberoi, Viju Khote, Surendra Pal and Prema Narayan. The film did reasonably well in small towns. 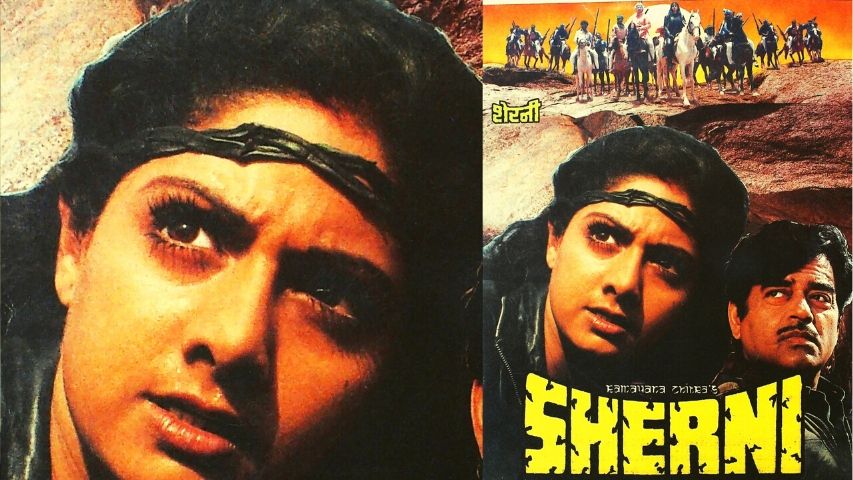 Leather Jackets and boots defined the role of the modern-day dacoit drama The plot is about Durga’s father who becomes a bandit to fight a cruel Thakur. The daughter joins the combat against evil by becoming Sherni, a lioness. Director Harmesh Malhotra was collaborating with Sridevi after the enormous success of Nagina. Sridevi’s mother was initially reluctant to allow her to ride a horse on rough terrain but eventually gave in. Sridevi was paired opposite Shatrughan Sinha. The result fared well again only in smaller towns, familiar with the scourge of dacoits. 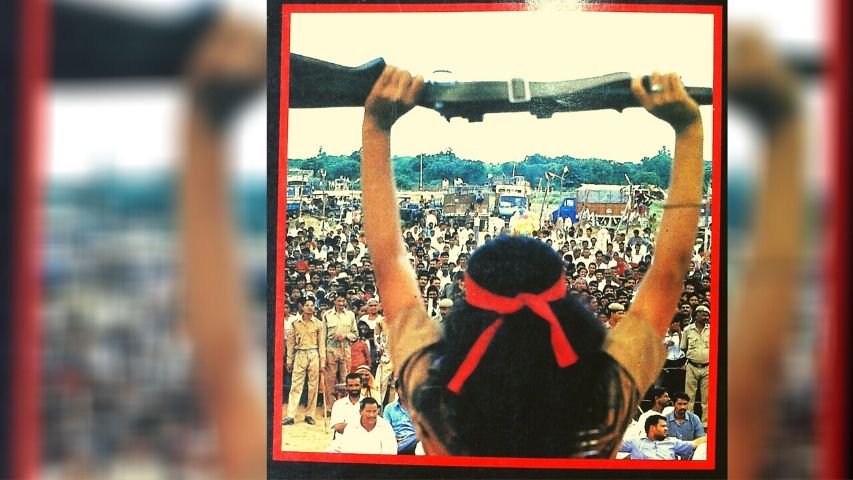 Seema Biswas essayed the title role in this biopic on Phoolan Devi, which was piloted by Shekhar Kapur. The film depicted the life of Phoolan Devi from a very young age in 1968 till she got married. Phoolan Devi had endured exploitation right to the extent of being raped in a village square in public view. She finally surrendered to the police in 1994.  Directed with realistic detailing, the biopic had its share of controversies for the use of abusive language and frontal nudity. Hard-hitting, Bandit Queen is considered to be the most authentic depiction of what drives women to assert themselves. After an absolutely realistic performance by Seema Biswas in Bandit Queen, it was the end of the road for female led dacoit films. Also, after the real life surrender of Phoolan Devi there was no really known female bandit left. Before Kapur’s work, which found favor among the masses as well as critics, there were some films on women dacoits but which went through the cracks.

To conclude, here’s a checklist list of Bollywood’s female actors who portrayed bandits.