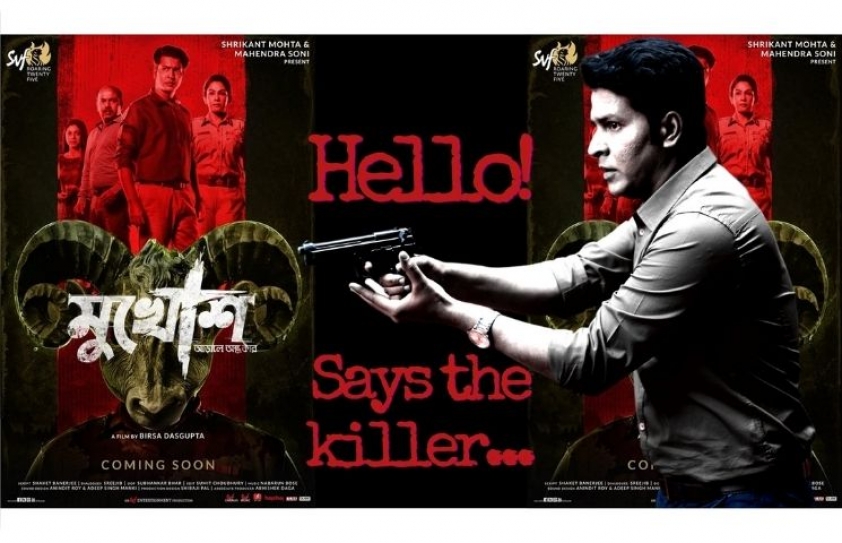 This serial cop-killer flick does not quite cut it either as a thriller or as a statement on crime and punishment, writes Shantanu Ray Chaudhuri

The serial killer film as a genre has boomed in recent times. Even as we have recoiled from the horrors of the Coronavirus, if the burgeoning films and web series’ are any indication, we seem to have embraced this particular subgenre of the crime/horror film, maybe as a means of coping with the panic engendered by the pandemic. However, Birsa Dasgupta’s Mukhosh barely manages to muster the chills that a serial killer film mandates.

Mukhosh begins with young student Kingshuk Ray (Anirban Bhattacharya) attending a lecture by a renowned professor and criminologist, Dr. David Paul. We are not privy to the meeting between the two. Instead, in an interesting bit of cutting, we flash forward a few years to see Kingshuk in an interrogation room with a man on death row. He meaningfully whispers that he would like to kill another person, he has killed eight, before being hanged the day after. Is Kingshuk willing to be the victim? There’s a nice little touch on the cacophony of our minds that the prisoner articulates, and the sequence primes one for two reasons: one, it comes as a novelty to have a killer identified in the opening sequences and two, there’s the promise of an intelligent take on the mind of a killer.

Unfortunately, both promises are belied. The narrative goes back in time again, with Kingshuk landing a job as a resident criminologist with the city police, even as the story thread with the killer on death row is left hanging. Kingshuk finds himself in the thick of things as a senior officer is waylaid by a mask-wearing man and his body found in a garbage heap the next day. Kingshuk immediately mulls over the possibility of this being the work of a serial killer challenging the police - isn’t that premature, I wonder, in the absence of a pattern of any kind being discerned yet?

Even as Special Commissioner Kaberi Bose (Chandreyee Ghosh) sets up a special team to handle the case, two more cops are killed and the modus operandi of the killer is established: the victim accosted by a masked figure who utters a deep resonant ‘Hello’ as a greeting, followed by a grotesquely mutilated body (the heart carved out) turning up with a specially designed crucifix containing a passage from the Bible next to it. Meanwhile, as the police surveillance system is hacked and even its CCTV footage compromised, Kingshuk employs the services of an unofficial hacker Taranga Rakshit (who prefers to be called Tab). 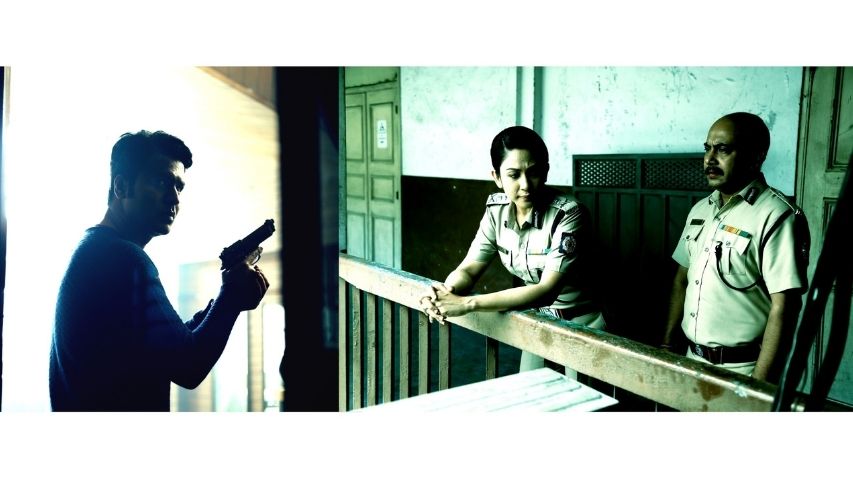 None of this is even remotely engaging or intriguing. The basic problem with Mukhosh is that there’s nothing in here that we haven’t seen before. So that even when Kingshuk deduces the mystery of the mask and its biblical implications (Behold the Lamb of God who takes away the sin of the world – John 1.29) or the viewer is introduced to what underlie the passages from Luke 23.43, Peter 2.24, Thessalonians 1.9, Romans 14.8 and Corinthians 15.26 that accompany the crucifixes, it is as if only the characters in the film are wowed by the unravelling. There are red herrings, the team is disbanded and a new officer takes charge and swiftly brings the case to a premature ‘close’, but the writing and visualization simply do not carry enough charge to overcome the deadening sense of déjà vu, despite some interesting visuals conjured by cinematographer Subhankar Bhar.

It does not help that for a police procedural, the working of the department comes across as inauthentic, thanks also due to the clumsy performances. There’s not one right note to the police officers, and the less said about the hacker the better (our crime films somehow fail miserably to get the ‘technology’ bit right). It says a lot about a film when even an actor of the calibre of Anirban Bhattacharya appears to be simply going through the motions.

Whatever potential the narrative had to conjure, even a passable thriller is undone in the film’s second hour as Dr. David Paul (Tota Ray Chaudhuri) reappears with an excruciating flashback and the action shifts to the past to unravel the mystery behind the cops being targeted. If there’s supposed to be a comment here made on the wages of sin, a meditation on moral corruption and retribution, it’s too muddled to come through. Why, even the symbolism, if any intended, behind the ‘mask’ of the film’s title never registers. Instead, we have the equally insufferable exchange between the killer and the officer as they ‘explain’ the killings to each other for the benefit of the viewer - with an almost laughable reason for the ‘hello’ with which the killer greets his potential victim.

There’s a moment earlier in the film when Kaberi Bose tells Kingshuk, ‘We need something, even if it’s just bloody luck.’ And it’s sheer luck that enables the police to nail the murderer as Kingshuk recognizes him from a sketch done by a character randomly added to the script for the very purpose. Agreed that large part of police work owes itself to happenstance, but here it is nothing more than an amateurish plot contrivance, and that is too, too late in the day as the film appears to be on autopilot with all possibilities drained, limping to its thoroughly uninspired climax.