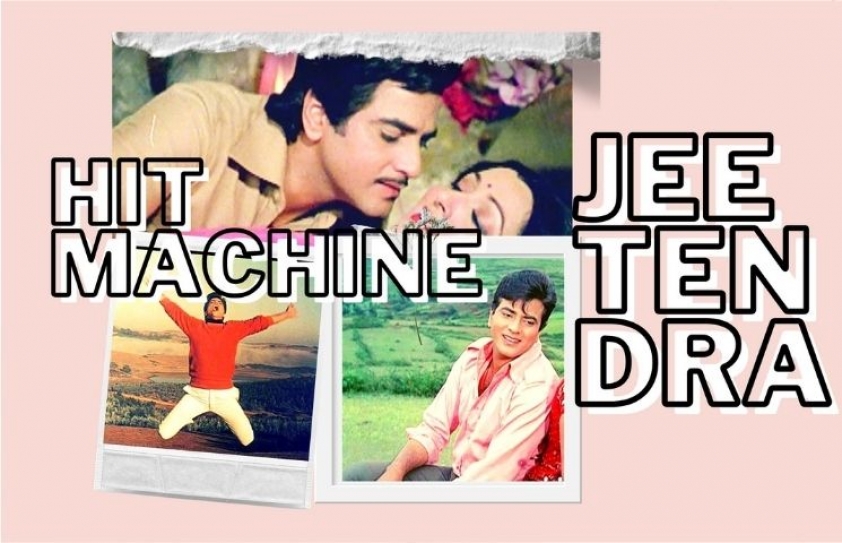 Film historian Dhruv Somani tracks the unique success story of Jeetendra who completed his 80th last week - in a welter of Hindi films made in Bombay and the south.

The South Indian film industry has always been miles ahead of Bollywood in terms of content and special effects. Today, countless films from the south are being dubbed in Hindi and other languages and command a high viewership either on YouTube or other OTT platforms.

Many of these films are being remade in Hindi. Topline producers and directors buy their rights for remakes. With Bahubali the doors have opened up and there have been lavish collaborations between Bollywood and the South to create larger than life entertainers. The recent blockbuster RRR and KGF Chapter 2 are proof of a blend of actors, irrespective of the distance between the cultures and their dialects.

Indeed, there was a time when most Bollywood actors were shy of working south of the Vindhyas while the superstars from there aspired to make their way into Bollywood, like Rajinikanth and Kamal Hassan debuted with Andhaa Kaanoon and Ek Duuje Ke Liye both in 1981. While both the films did well, they could not firmly establish the superstars in Bollywood.

Meanwhile, there were Bombay actors who did a few films down south time and again Indeed, it was Jeetendra who cashed in on the success of the masala pot-boilers made by big banners down south. Striking a balance between the film-production centers of Bombay, Chennai and Hyderabad, his crowd-pleasing vigorous dances earned him the epithet of Jumping Jack. 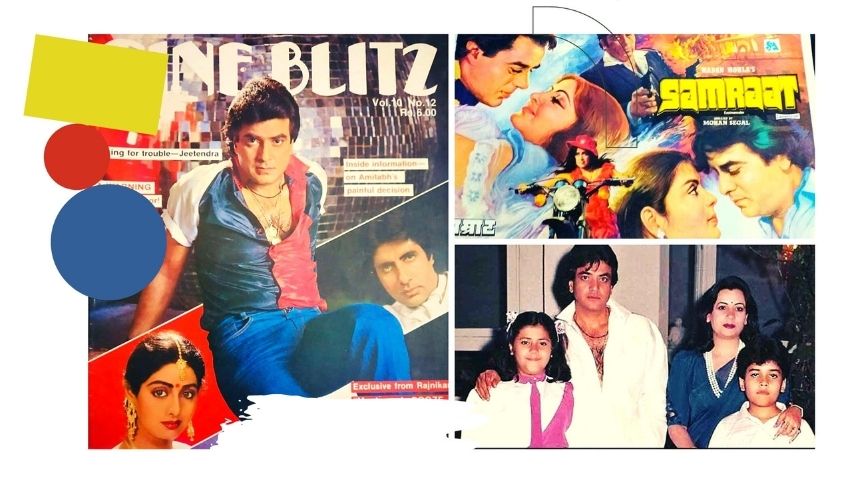 Here’s a throwback, then, to the distinctly unusual career of Jeetendra who turned 80 on April 7.

His first brush with acting happened with V. Shantaram’s Geet Gaya Patharon Ne (1964) and Boond Jo Ban Geyee Moti (1967). Incidentally, his first whisk of the south happened very early in his career. He was offered Farz (1967) in which he played Secret Agent 116 (Gopi) opposite Babita. Directed by Ravikant Nagaich, Farz was inspired by the Telugu super hit Gudachari 116 starring Krishna (father of Mahesh Babu), which had elements straight out of the James Bond worldwide blockbusters. Farz was initially offered to Shashi Kapoor and Manoj Kumar who felt it was a Dara Singh-like stunt film and declined the offer.

However, Farz was a whopper at the cash counters and gave Jeetendra his first much-needed hit. Next Jigri Dost (1969), directed by Ravikant Nagaich, featured Jeetendra with Mumtaz and Punam Sinha. A hit again! The look with tight white trousers and white jackets teamed with a muffler along with sparkling white shoes completely became a fashion trend in the south.

Though Jeetendra was busy in Bollywood he did manage to allot dates for Himmat (1970) produced by P.Mallikarjuna Rao, which again was directed by Ravikant Nagaich. Mumtaz was his co-star. Jawab and Humjoli, both directed by T.R. Ramanna, in which he was cast opposite Leena Chandavarkar followed. As for Humjoli, produced by his own brother Prasan Kapoor, it was well received at the box office. His winning streak continued with Shaadi Ke Baad (1972) with Raakhee and Shatrughan Sinha as his co-stars but the best was yet to come. 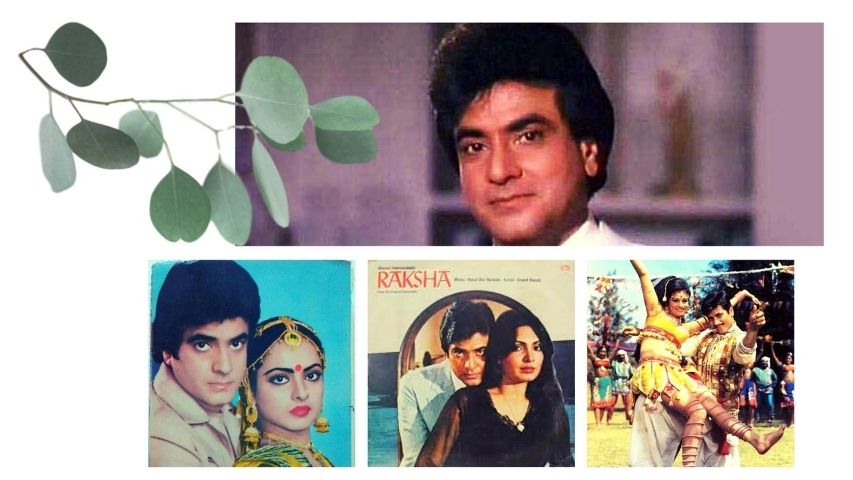 C.V Sridar cast Jeetendra under his banner Chithrakala Pictures with Amitabh Bachchan and Hema Malini in the action thriller Gehri Chaal, for which he played the main hero while Amitabh played a role with grey shades. This was the only time the two actors worked together. Gehri Chaal did reasonably well and was followed in the same year by Jaisa Ko Taisa in which he essayed a double role and was paired with the upcoming Reena Roy (a pairing which proved to be fruitful in many more films thereon). Their song Ab Ke Saawan Mein Jee Dare created waves and is still one of the most watched rain songs on YouTube.

Towards the end of the 1970s Jeetendra starred in Dildaar and Dil Aur Deewar both in 1978 directed by K. Bapaiah opposite Rekha and Moushumi Chatterjee, which performed averagely at the box-office.

It was Swarg Narak (1978) under Vijaya Productions and directed by Dasari Narayana Rao where Sanjeev Kumar, Vinod Mehra, Shabana Azmi and Moushumi Chatterjee accompanied him, which became a major hit. Ditto Lok Parlok, a comic caper co-starring Jaya Prada, Premnath and Asrani. Besides featuring in the high-profile films of Bombay like Naagin (1976), Apnapan (1977), Karamyogi and Baladtey Rishte (1978), Jaani Dushman and Aap Ke Deewane (1979) and The Burning Train (1980), he continued to jet to Madras or Hyderabad for his other shoots. 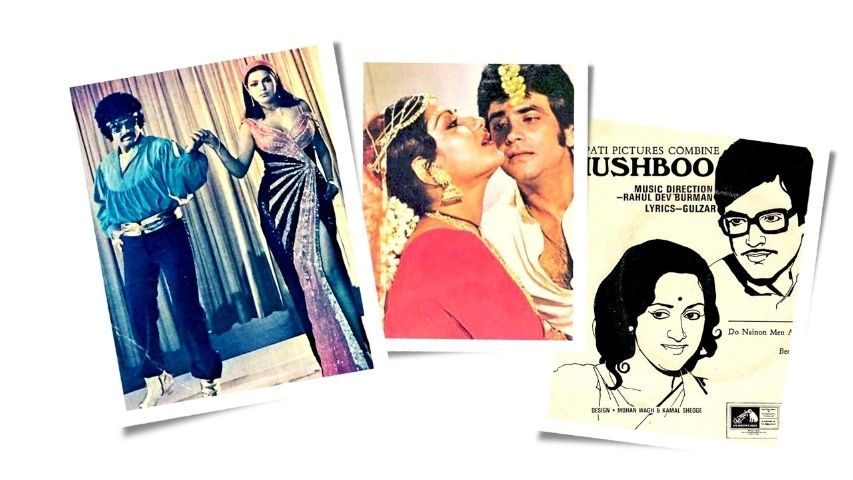 With the onset of the new decade, the 1980s, Jeetendra was considered infallibly bankable. A hit machine, he had almost shifted to Madras. The year 1980 began with the multi-starrer hit Takkar under the banner of Padmalaya Studios and directed by K. Bapaiah. Sanjeev Kumar, Jeetendra, Vinod Mehra headed the cast along with Zeenat Aman, Jaya Prada and Bindiya Goswami. Next, came Dasari Narayana Rao’s Jyoti Bane Jwala in which he played the title role supported by Vinod Mehra, Waheeda Rehman, Moushumi Chatterjee and Sarika. Incidentally, another major film Jwalamukhi directed by Prakash Mehra had a similar storyline and both raced toward a faster release. Jwalamukhi failed, Jyoti Bane Jwala was a big winner at the ticket counters.

1980 was the peak year with Judaai, co-starring Rekha, and directed by Tatineni Rama Rao. Audiences also thumbed up the breezy Nishana (1980) with Poonam Dhillon, the love triangle Maang Bharo Sajana (1980) in which he was once again paired with Rekha and Moushumi Chatterjee. And the made-in-Bombay product Aasha, directed by J.Om. Prakash, opposite Reena Roy and Rameshwari turned out to be one of his memorable triumphs with nothing to stop his success.

Next year he yo-yoed with hit after hit with Pyaasa Sawan (1981) in which he essayed a double role opposite Moushumi Chatterjee and Reena Roy. The songs Megha Re Megha Re and Tera Saath Hai Toh were chart-busters. Ek Hi Bhool directed by Tatineni Rama Rao did well too, in which he was seen opposite Rekha and Shabana Azmi. 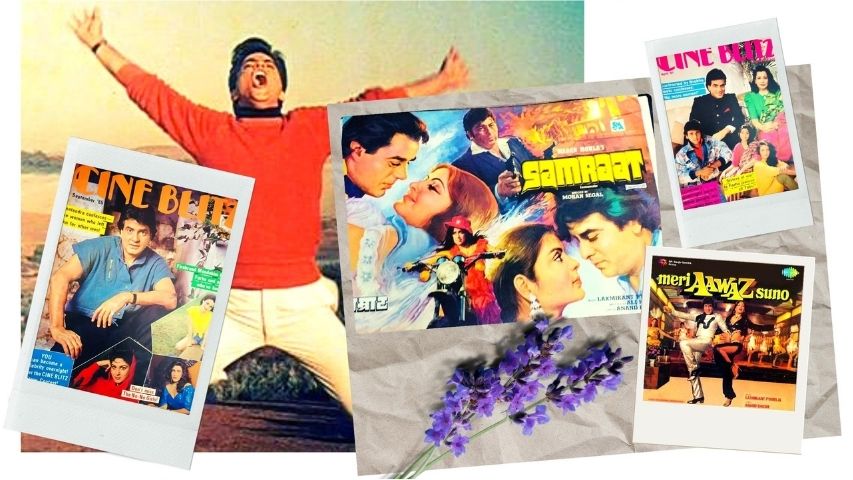 Towards the end of 1981, the action-packed Meri Awaaz Suno directed by S.V. Rajendra Singh from Padmalaya Studios was another huge success. Though Meri Awaaz Suno (1981) did fall into trouble due the excessive violence depicted in certain scenes and was also banned initially by the censors, it clicked and how. Here, he was paired with Hema Malini and Parveen Babi whose dance numbers were appreciated by the viewers. The song Kanwarlal Naam Hai Mera was a topper. Later he played the title role of Kanwarlal (1988).

Jeetendra continued with his winning streak in 1982 with the spy thriller Raksha as Gopi (Agent 116) directed by Ravikant Nagaich opposite Parveen Babi. And he was unstoppable with Farz Aur Kanoon with Hema Malini and Rati Agnihorti, and Raaste Pyar Ke another love triangle opposite Rekha and Shabana Azmi in the same year.

1983 proved to be majorly auspicious, too, as he was paired with Sridevi in Padmalaya Studios’ Himmatwala directed by G.A. Sheshagiri Rao (a pairing, which enjoyed multiple hits together). Sridevi who had earlier done Solva Sawan (1979) with Amol Palekar was trying to gain a foothold as a commercial actress and their pairing became a craze. Other hits followed like Prem Tapasya (1983) opposite Rekha and Reena Roy, Jaani Dost (1983) with Dharmendra, Sridevi and Parveen Babi, and lastly, two cash-earners, Justice Chaudhury and Mawaali, with music by Bappi Lahiri. Not surprisingly a rivalry broke out between Sridevi and Jaya Prada in his projects. There were catfights between the two about who among them would play the lead opposite Jeetendra in the next one. 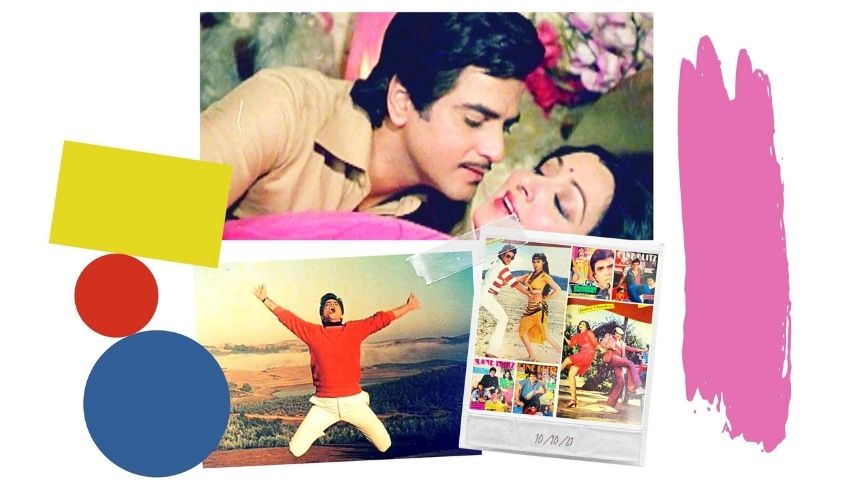 He remained in top form in 1984 with Tohfa - again he was paired with Sridevi and Jaya Prada. Its superlative music is still remembered and so is Shakti Kapoor’s “Aaoo Lalita!”, which kept the audiences in splits. Other films, which followed the success path in the same year were Maqsad, Akalmaand and Qaidi, while Yeh Desh, Kaamyaab and Haisiyat toted an average run.

His triumph and luck continued at the ticket windows with films like Hoshiyar (1985) opposite Meenakshi Seshadri, the comedy Pataal Bhairavi (1985), opposite Jaya Prada, Sarfarosh with Sridevi, Mera Saathi and Sanjog - both opposite Jaya Prada and all of them were released one after the other. 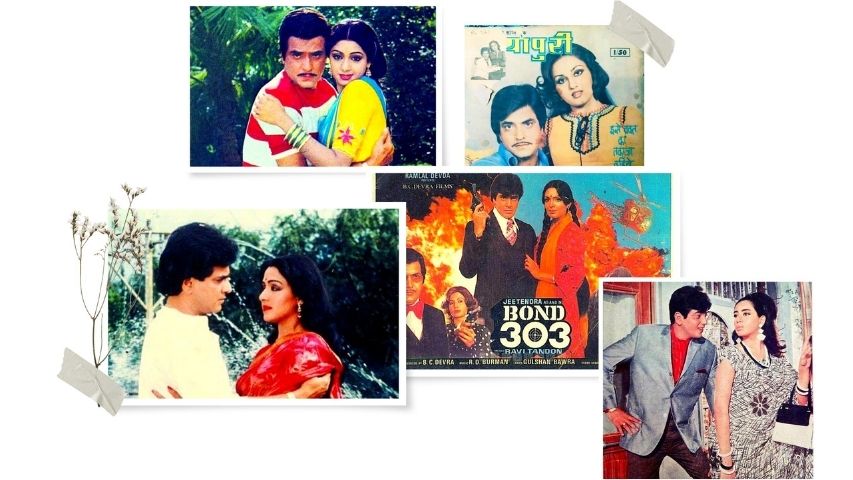 Khudgarz (1987) directed by friend Rakesh Roshan saw him in a strong role with Bhanupriya, Shatrughan Sinha, Amrita Singh, Govinda and Neelam, which again was a blockbuster. Other noteworthy films, also hits, were Jaan Hatheli Pe (1987), Mulzim, New Delhi and Dav Pech (1988), Sone Pe Suhaga (1988), Souten Ki Beti (1989), Zahreelay, Nyay Anyay, Thanedaar and the magical Hatim Tai in (1990), Maa (1991), Jeetendra was a hit machine till almost 1993 with D.Rama Naidu’s Santaan where he played a strong character role with Moushumi Chatterjee. He then shifted his focus back to Bollywood films like Khalnaikaa (1993), Aadmi Khilona Hai (1993) and Rang (1993), and gradually shifted to strong character roles. He did appear in a few films occasionally but moved on to television, paving the way for the booming success of Balaji Television headed by his daughter Ekta Kapoor.

Jeetendra tried to cultivate a serious image during the 1970s with the Gulzar films Khushboo (1975) and Kinara (1977), but was savvy enough to realize that his pot at the end of the rainbow was to be found southwards. He was one star whose pairing with most of the actresses was successful be it Rajshree, Asha Parekh, Mumtaz, Leena Chandavarkar, Babita, Aruna Irani, Hema Malini, Rekha, Reena Roy, Neetu Singh, Moushumi Chatterjee, Sridevi, Jaya Prada, Meenakshi Sesadri and Bhanupriya. To date, he remains an affable and modest star even after those super-magical days of yore.