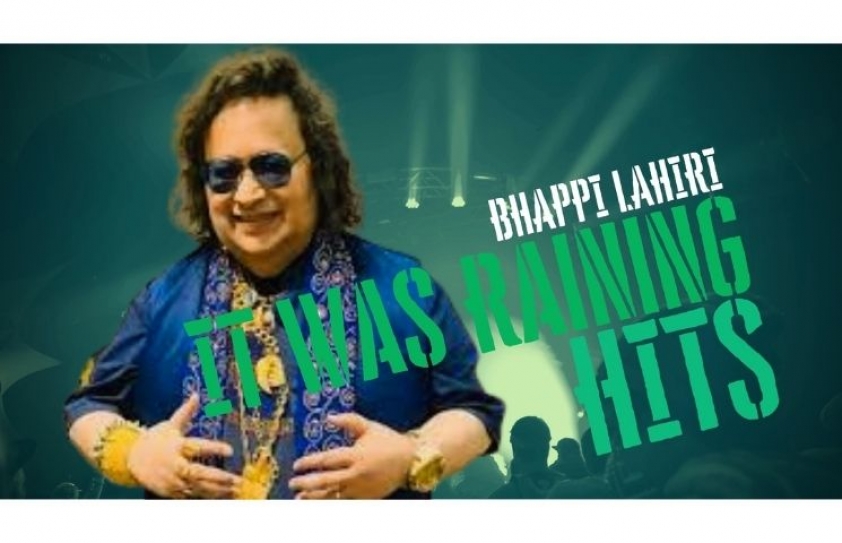 It was raining hits

The oomph is his music was unmistakable. Aparesh Lahiri fondly addressed as Bappida escorted listeners on a jiving, electronica journey. He had a flamboyant personality, which spoke of western influences; his colorful wardrobe embodied his love for bling and his penchant for gold was evident with layers of chunky gold neck chains. He raised the ‘Disco’ fever in India.

He was said to be a fan of Elvis Presley, Beatles and also Michael Jackson. He also adored Elton John and felt he resembled him. He started playing the tabla at the age of three, composing his first tune at 13. His career blossomed when he left West Bengal for Bombay. He was related to Kishore Kumar from the maternal side of the family. Kishore da encouraged him to find a foothold in the Bollywood music industry.

His first assignment was Nanha Shikari (1973), which failed to create a buzz. The same year came Charitra, starring Salim Durrani and Parveen Babi that too tanked at the box office. Bazar Bandh Karo and Ladki Badnaam Si (1974) were other small-budget films, which met with a similar fate.

Success came with producer Tahir Hussain’s Zakhmee (1975), starring Sunil Dutt, Asha Parekh, Rakesh Roshan and Reena Roy. The film as well as its music clicked. Incidentally, he snagged after having composed the background score of Hussain’s earlier film Madhosh (1974), but not before obtaining a no-objection certificate from the original composer R.D. Burman as he was too busy those days. 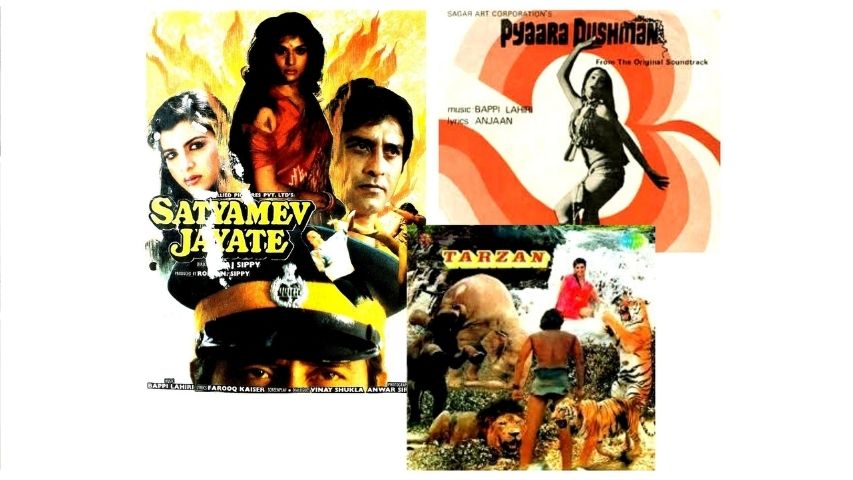 His songs from Mahesh Bhatt’s Lahu Ke Do Rang (1979) too were highly appreciated but big banners eluded him. Accusations of plagiarism followed him and Bappi, sportingly ignored jokes about his Bengali accent and his flashy dress sense, of course!

He began to introduce fresh talent and use underutilized singers. Among them were also singers like Usha Uthup, Sharon Prabhakar, Preeti Sagar, Parvati Khan, Vijay Benedict and Salma Agha. His major collaboration was with none other than Alisha Chinai.

He introduced disco as a genre, with his songs for Pyara Dushman (1980) with the song Hari Om Hari, inspired by Neil Sedaka’s One-Way Ticket.  Thereafter Bappi da, Kalpana Iyer and Usha Uthup belted out quite a few foot-stompers. Take Armaan (1981) in which Ramba Ho Samba Ho by Usha Uthup and Aa Meri Jaisi Haseena Ka Dil with Sharon Prabhakar topped the charts. But the best was yet to come. 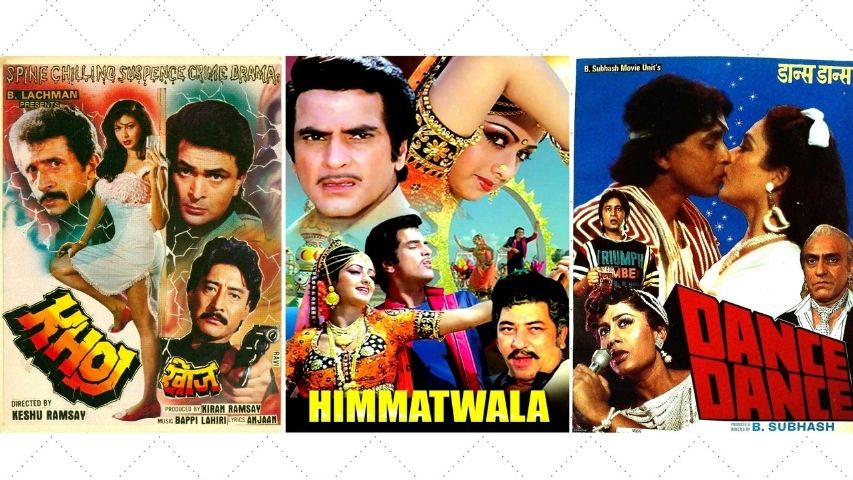 Director B.Subhash met Bappi da for the first time during the recording of his film Taqdeer Ka Badshah in 1978 at Mehboob Studio. The year 1982 became momentous as he was signed by B.Subhash for Disco Dancer with Mithun Chakraborty and Kim in the lead, and Rajesh Khanna was in a guest appearance. The composer went out on a limb, coming up with numbers like I am a Disco Dancer, Auva Auva Koi Yahan Nache Nache, Goron Ki Na Kalon Ki, Yaad Aa Raha Hai Tera Pyar and Jimmy Jimmy, rendered by Parvati Khan. In fact, Jimmy Jimmy became an international chartbuster, especially in Russia where Mithun Chakraborty and Kim are very popular even today. Kim was asked about it and says that she is still called the Jimmy Jimmy girl. The backstory goes that since the song was for the climax of the film, Bappi da did not feel satisfied. He sat down personally on the console, duplicated the vocal track and the outcome was phenomenal.

One of the other popular tracks Yaad Aa Raha Hai Tera Pyar – was to be recorded with Kishore da who had driven all the way from Juhu to Cuffe Parade (HMV’s Studio). But the elevator was not working; Kishore Kumar, who had recently been diagnosed with a heart problem, avoided climbing two floors. He called Bappi Da down stairs and told him to record the song in his own voice, which he would dub later. When he heard the scratch recording, he insisted that the track should be retained in Bappi Da’s voice. 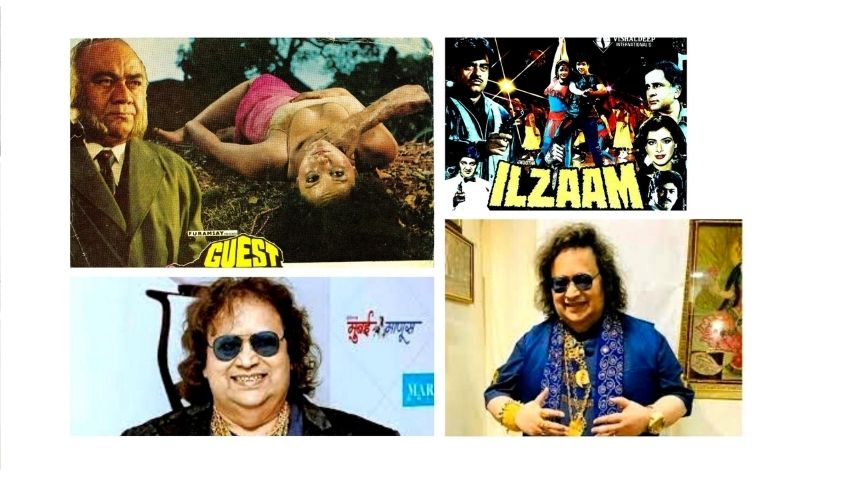 B.Subhash signed him for most of his forthcoming films like Kasam Paida Karne Wale Ki (1984), where he trained the lead heroine Salma Agha whose nasal voice had become a craze with her hit songs in Nikaah (1982) composed by Ravi, to move on to the fast-paced Jeena Bhi Kya Hai Jeena, (inspired from Michael Jackson’s Billie Jean), Come Closer, and the title track Kasam Paida Karne Wale Ki. The track Come Closer was eventually used by the Hollywood film Lion.

Other films for which his songs with B.Subhash were talked about were Adventures of Tarzan (1985) in which Alisha Chinai crooned the catchy Tarzan My Tarzan and Jilele Jilele. For Dance Dance his tracks with Alisha Chinai and Vijay Benedict had a wow effect. Next came Zooby Zooby borrowed from Brother Louie’s Modern Talking, and Dil Mera Todo Na with riffs from UB 40’s Don’t Break My Heart. It was an album in which Alisha was in her element, singing for both Smita Patil and Mandakini. They also teamed up for his next, Commando (1988) and Pyar Ke Naam Qurbaan (1990). Alisha became a regular in all his projects and was a part of his concert tours.

Bappi Lahiri gave music for the first time for the Ramsay Brothers in Aur Kaun (1979). The song Haan Pehli Baar by Kishore Kumar was really appreciated. For Saboot (1980), he made an impact with the Lata Mangeshkar-rendered Dooriyaan Sab Mita Do and Jeena Bhi Koi Jeena Hai.

Their association with the Ramsays continued with other popular films like Guest House (1980), Dahshat (1981), Haveli and Saamri 3D (1985), Dak Bangla and Mahal (1987), Veerana (1988) - he made Suman Kalyanpur sing her last Bollywood song Saathi Mere Saathi for it, Khoj and Saaya (1989), Shaitani Ilaaka (1990), Aakhari Cheekh (1991) and Bachao (2010). He also gave music for their unfinished films like Maut Ka Saaya and Om. Incidentally, he worked in a majority of the spine-chillers of the horror kings. 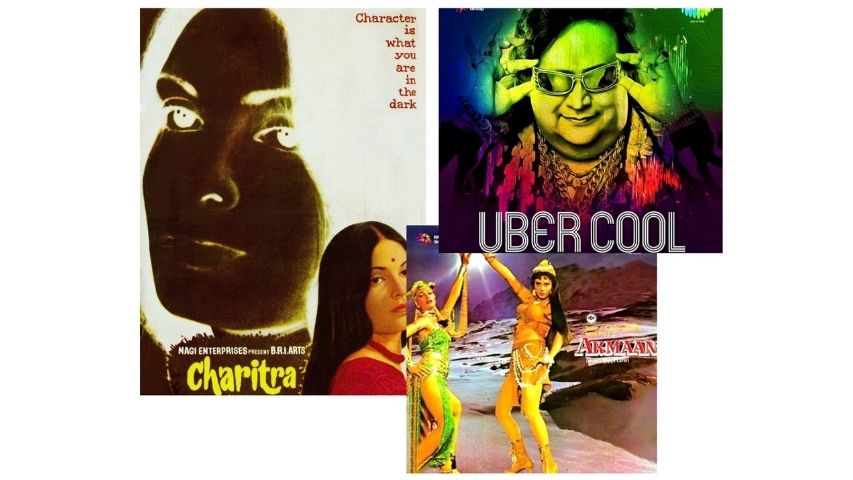 By  1982 Bappi da, was acknowledged as the Disco king in Bollywood. Big banners, which eluded him by now, were now waiting to sign him. He was elated when Prakash Mehra offered him the Amitabh Bachchan starrer Namak Halaal (1982). He composed the very different Pag Ghungroo Bandh for Bachchan. Other songs like Jawani Janeman, Raat Baaki Baat Baaki, Aaj Rapat Jaye and Thodi Si Jo Pee Lee Hai made the album a sell-out. Before this, Prakash Mehra had worked with Kalyanji-Anandji for his blockbusters like Zanjeer (1973), Muqaddar Ka Sikandar (1978) and Laawaris (1981). Eventually, Kishore Kumar won his fifth Filmfare award for Pag Ghungroo. After the stupendous success of Namak Halaal, Mehra signed him again for the Bachchan starrer Sharaabi (1984). Result was a blockbuster with every song becoming a hit. Bappi da won the award for the best music director for Sharaabi.

Just when he was about to get written off Bappi da bounced back with desi danceable riffs. The songs of Himmatwala (1983) like Naino Mein Sapna and Taki O Taki were crowd pleasers. Now began an association with Jeetendra and popular directors from the South, thanks to the catchy songs of Mawaali and Justice Chaudhary (1983), Tohfa, Maqsad and Qaidi (1984), Pataal Bhairavi and Hoshiyar (1985) and Himmat Aur Mehanat (1986). 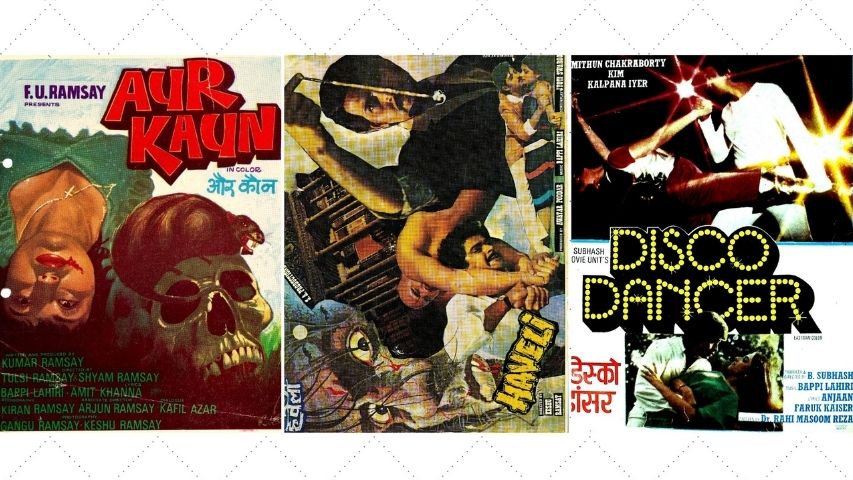 He also composed superlative music for Saheb (1985) with Yaar Bina Chain Kaha Re, and the Bachchan starrer Geraftaar (1985) in which his Dhoop Mein Nikla Na Karo Roop Ki Raani was one of the film’s chief assets.  More success followed with Satyamev Jayate (1987), in which he sang the male version of Dil Mein Ho Tum shot on Vinod Khanna who was making a comeback after his self-imposed exile.

Ilzaam (1986) and then Paap Ki Duniya (1988) were more feathers in his cap with popular songs like Bandhan Toote Na, Zindagi Pyar Hai Pyar Hai Zingadi, Choori Choori Jab Yun Ho and anyone who listened to the radio would surely remember that Main Tera Toota Tu Meri Maina, which was much in demand. Towards the end of the decade, he delivered an emotionally stirring album for with Mithun-Madhuri Dixit starrer Prem Partigyaa (1989).

Soon Thanedaar made an impact with Tamma Tamma with its quirky dance moves and lyrics. The tune was a rip-off of Mory Kante’s 1987 album Yeke Yeke. Indeed there was a controversy since Tamma Tamma and Jumma Chumma were both inspired by Mory Kante. The softer numbers like Aur Bhala Kya Maangu Main Rab Se and Thanedaar Aa Gaya were also well received. 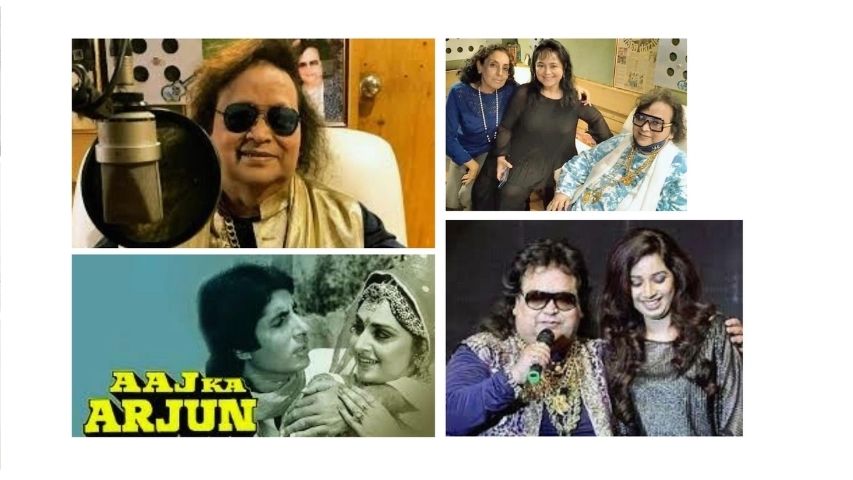 It rained hits with Dalaal and Aankhen both in 1993. The raunchy number Chad Gaya Upar Re from the latter and O Laal Dupatte Wali, Aangna Mein Baba and Ek Tamanna Jeevan Ki from Aankhen were more feathers in his crowded cap. Sailaab (1990) with Humko Aaj Kal Hai Intezaar with the sensuality of Madhuri Dixit’s koli dance number was another triumph. But he did go overboard with Rock Dancer (1995) with some double meaning songs and absurd lyrics like ‘You are my Chicken Fry’ and ‘Traffic Jam Sorry Traffic Jam’ which failed miserably and made people cringe.

He cut down his workload in Bollywood in the new millennium, which saw him focus on international music and private albums. Along with his son and daughter he veered towards world music, at the same providing his playback vocals Taxi No: 9211 (2006) in which he sang Bombai Nagaria and Chandni Chowk To China (2008) in which he sang India Se Aaya Tera Dost (a variation of his earlier hit Aap Ki Khatir).

He was back in the news with Dirty Picture (2011) for which he sang O La La O La La with Shreya Ghoshal, a veiled reprise of his track Ui Amma Ui Amma from Mawaali, since they couldn’t get the rights from SaReGaMa, which asked for a big amount of money. In 2013, he sang Tune Maari Entreeyen from Gunday in both the Hindi and the Bengali versions.

Bappi da left the world too soon due to his multiple illnesses but left an inerasable smile on the faces of Bollywood music. The title track from Chalte Chalte - Kabhi Alvida Na Kehna sums up his journey.