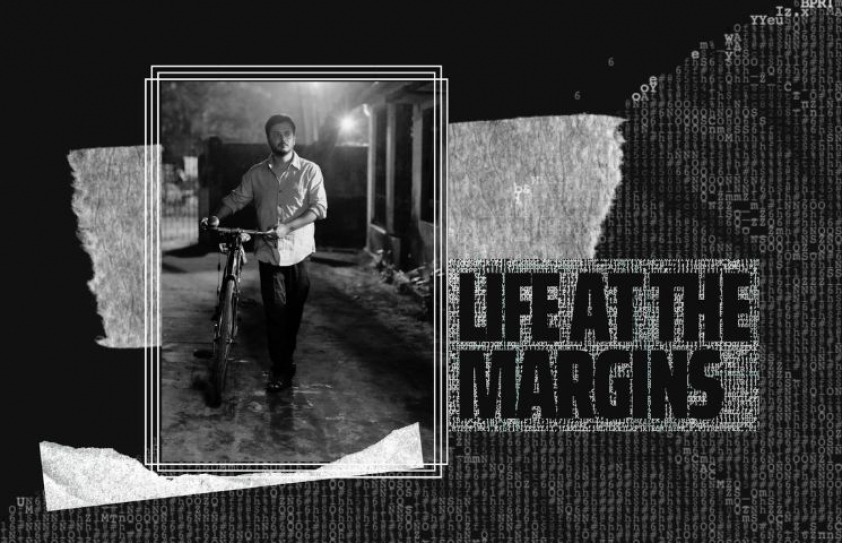 Joydeep Mukherjee’s intensely political directorial debut is a haunting look at life in a metropolis. Shantanu Ray Chaudhuri reviews the film as it gears up for a theatrical release.

A pheriwala - the ubiquitous hawker you see on buses and local trains, selling candy cola to the accompaniment of a delightful limerick and a young man in the bus watching him intently, enamored by the way the man hawks his ware. The pheriwala alights. The man follows and calls out to him.

It’s an enchanting prologue to what is a remarkably assured debut feature by Joydeep Mukherjee. ‘Akash Ongshoto Meghla’ – the phrase has a certain melancholic ring to it. Bengalis listening to news on the radio will recognize it as part of the closing phrases of a news bulletin announcing the weather - the sky is partly cloudy. But the English translation simply does not have the same resonance as the original. Joydeep’s film, a tribute to the resilience of man in the face of the most daunting odds, beautifully captures the spirit of the phrase.

The film is based on two stories by author Swapamoy Chakraborty: Merudanda (Spine) and Patakar Kapod (The Flag Cloth). Though different in the setting and characters, there’s a common thread that the director uses to weave the two into a single narrative.

In one story, Roshomoy Bagchi (Rudranil Ghosh) is a migrant worker who has left his village and its barren landscape with his wife Alpana (Ankita Chakraborty), dreaming of making a better life in Kolkata. He lands a job as a worker in the Northern Jute Mill. However, it doesn’t take long for the dream to sour as the mill declares a lockout. With the help of a local party worker (this is the party of the workers, the party with the red flag and the laal salaam), Aloke (Kaushik Kar), Roshomoy manages to get a roadside shop selling a wide range of fritters. Life is tough, made more so by his daughter’s hearing disorder that he is to blame for. He believes in the party and its leader, represented by one Prabhas-da (Debdutt Ghosh), explicitly, but realization slowly dawns on him that the labor union and the party is unable, and unwilling, to break the deadlock.

The protagonist of the other story, Anirban (Rahul Banerjee), is a bright student who has had to give up his American dream and academic pursuits following a lockout in his father’s Bengal Engineering factory. That leaves him as the sole bread-earner, with just a few tuitions that he has, of the family comprising his parents and two sisters. There’s also his girlfriend, Anandee (Basabdatta Chatterjee), a temporary schoolteacher, who is being targeted by goons who want her father and her to vacate their premises so that the local builder can raise a multi-story there. 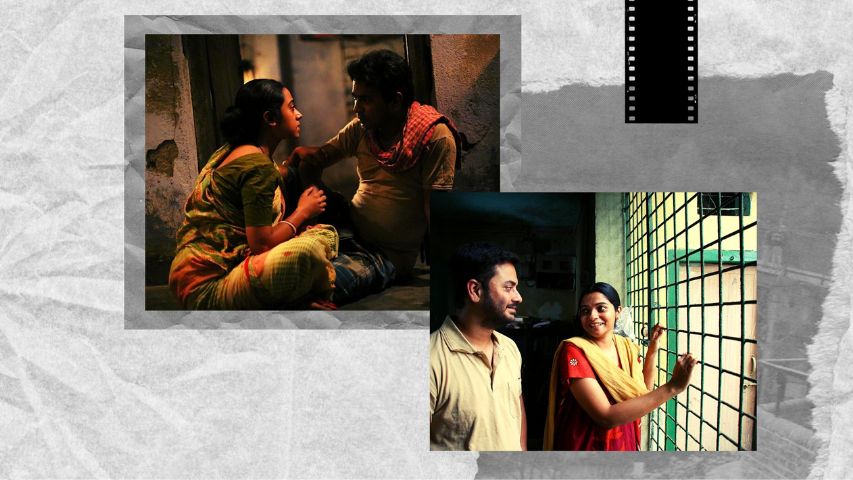 But if the two stories appear simple and straightforward in the writing, the film is anything but. The primary triumph of Akash Ongshoto Meghla lies in Joydeep’s screenplay. He not only weaves the two, extracting the core from each, it is the non-linear structure that makes the narrative such a fascinating watch. It is that, apart from the very relatable stories, that draws your attention and calls for total immersion in the film.

Just consider a couple of sequences, both involving Roshomoy. In one, he is reading from a newspaper sitting at his hole-in-the-corner eatery and finds that a news item pertaining to the lockout is missing. That’s when he is hailed from the party office window upstairs to get some fritters for the volunteers. The follow-up to that sequence happens much later, this time the point of view shifting to the party worker shouting to him from the window, or, the sequence where Roshomoy slaps his daughter for covering the fritters in the party flag – one that plays over through different cuts at three places. Or in the sham interview that Anirban has, a sequence that again plays out over a number of scenes.

Why this works is because the film is constructed as a conversation between Roshomoy and Anirban (following their meeting in the prologue), which comes through in the epilogue. As Joydeep says, ‘When I broached the subject with Swapnamoy-da, he was like, “What! How is that possible?” I had done a play version of Merudanda. I loved the story. I had planned a short film based on it. Then I read Patakar Kapod. And the idea kept fermenting in my mind. I realized that structuring the two stories parallel would get boring. That’s when I decided to have the two characters meeting in the end. That decided the narrative. Two people sharing stories are unlikely to talk of their lives in a chronological order. They are more likely to go back and forth, pick up a snippet here, a strand there.’ And it is this fractured narrative that gives the film its heft.

As do the performances. This is one brilliantly acted film, with not one actor out of character. Even the smallest of roles is finely etched. Watch Damini Benny Basu, for example, as Anirban’s elder sister. She has barely a couple of scenes, but what dignity she brings to them. In particular note the sequence where she is standing at the window, the dusk light illuminating her face, and the wistful conversation that follows with Anirban. It’s the one scene in the film that conveys the heartbreak of a thousand dreams. And it does so because of the way the actor plays it - as also the evocative lighting. 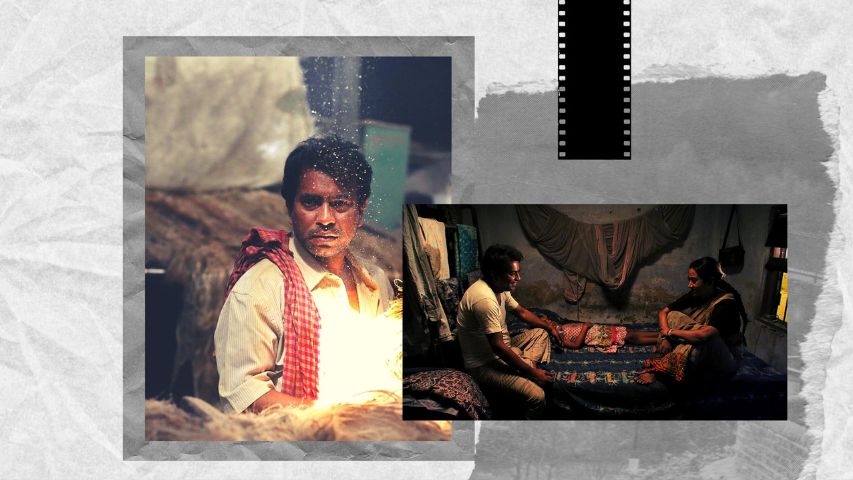 And Ankita Chakrabarty, who plays Alpana, Roshomoy’s wife, a character that’s not even there in the original story. As the director says, ‘Yes, there are characters, sequences I fleshed out. The original stories were only 3-4 pages long. In Roshomoy’s story, the wife had just a passing line. But I realized that without the wife and the child, his struggle didn’t quite come through visually, like it did in the story.’

But of course the icing on the cake is the two lead acts, Rudranil and Rahul. And I would go so far as to say that this is the finest they have ever been in their careers. Rudranil is jaw-dropping good, as the migrant worker losing his bearings when the world around him collapses. Just catch the little things he brings to his act, the way he grimaces and wrings his fingers while wrapping the hot fritters for his customers. It’s that instinctive. Or the way he reads the papers haltingly, trying to make sense of a sentence one letter at a time.

Rahul brings another layer to the helplessness that marks his character. Here’s an individual who has had the good life snatched from him and is now desperate for a job, even that of a typist/lower division clerk. Look at the hesitation as he approaches his friend for a clean white shirt in which to go for the interview. His tired gait, even the fear - that crosses his face temporarily as he stands up to the builder thug at Anandee’s place. It is a wonderfully nuanced performance that works because it is low-key.

That’s the other merit of the film – its understated nature. It’s a bleak world. And there’s nary a ray of light. But Joydeep tells it almost in a matter-of-fact manner, without underlining anything. It’s obvious that it’s a world he knows well. He says, ‘There was a lot of research – interacting with laborers, union, migrants. Ashoke Dasgupta, a teacher at Chitrabani and St Xavier’s, had made a documentary around the subject. He suggested I watch that. I was also part of that milieu. I grew up in that era. I actually met the guy selling lozenges on a bus.’

It’s apparent in the way the chicanery of the political and business class plays out. It’s visible in the production design - Roshomoy’s hovel (with a framed photograph of Lenin, which he dusts lovingly), for example, or Anirban’s house. It’s evident in the way Anirban’s younger sister wants a pair of school shoes and a pizza, she has heard that it’s very tasty, once he lands a job. In the way his father dusts off a work certificate – the sum total of his achievements. In the way his mother treats the elder sister with just that trace of irritation, as also the manner in which Anirban’s job interview is conducted - a throwback to that cult interview scene in Satyajit Ray’s Pratidwandi. 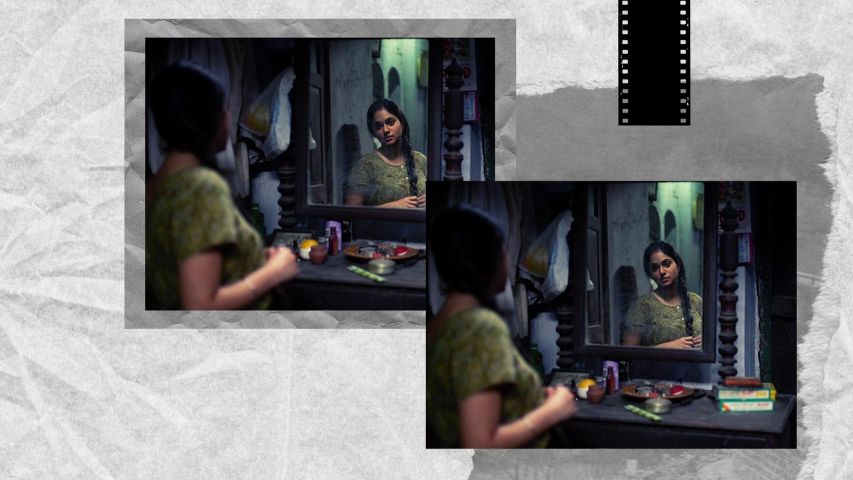 Nothing has quite changed for the common man in these fifty years. It’s just that the anger simmering in Ray’s classic has given way to quiet resignation. As Roshomoy says, he is very angry but does not know who to be angry at, his voice barely able to articulate his angst and vulnerability. All of this material is easy to play over the top. But which comes together bitingly because the director has impeccable control over it.

It’s an intensely political film – another aspect that’s almost gone missing in mainstream Bengali cinema. And that has landed the film in some hot water, given the political inclinations of the two lead actors. The director’s father himself has been a member of the communist party, though the film is extremely critical of the party’s approach to its constituents. ‘Every responsible filmmaker has to be political,’ says Joydeep. ‘The problem came when a leading newspaper announced a headline saying, “Rudranil and Rahul in a political film.” But it is impossible to understand these characters devoid of the political aspect. Their crises are interwoven with the politics of the era. I could have played safe. I have put up the truth as I witnessed it.’

What makes the politics work is the humanity that underlies the telling. Yes, the political class has failed the people. But the character of the party worker, Aloke, is not painted in black and white - there is a certain perspective that informs his actions with which you can sympathize even if you don’t agree.

This compassion, this empathy comes to the fore brilliantly in the epilogue. Two people with shattered dreams, without a job, sipping tea at the roadside stall while the radio blares news of the prime minister mentioning a bullet train as part of the seventy-fifth anniversary of the country’s independence, or of multi-crore IPL deals being struck and of the state’s chief minister hailing a global industrial meet that will offer employment to millions, before the newsreader fades out with the weather bulletin: akaash ongshoto meghla… for some lives the sky will forever be partly cloudy. It is achingly eloquent.