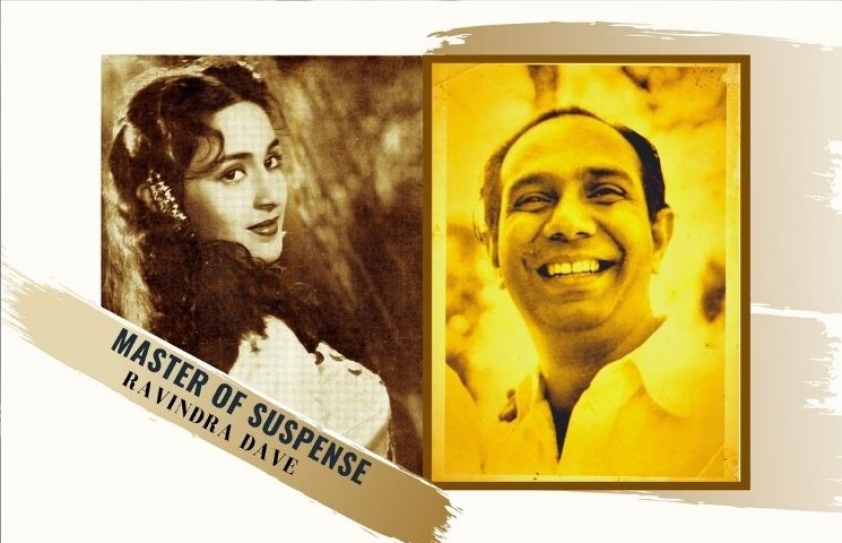 Ravindra Dave wasn’t as celebrated as the other iconic filmmakers of Hindi cinema.

Let me start with a curious story. By the standards of the Censor Board, shortly after India’s independence, Nagina (1951), a mystery thriller was considered too frightening for children. It was one of the first Hindi films to be given an ‘Adults only’ certificate, that proved to be a disappointment for its leading lady, the debutante Nutan.

Indeed, it’s lored that the legendary actress who was 15 years old then, was escorted by family friend Shammi Kapoor, to the premiere at Mumbai’s Imperial cinema. She was turned away by the cinema’s entry guard.

Based on a story by Ramashankar Chowdhury, Nagina was replete with quite a few horror scenes. Its director Ravindra Dave, had given a major break to Shobhana Samarth’s lanky teenage daughter with Dilip Kumar’s brother Nasir Khan as her hero. The film also introduced playback singer C. H. Atma. The music was composed by Shankar-Jaikishen, flush then, with the chartbusting songs of Raj Kapoor’s Barsaat (1949).

By the way, although rarely acknowledged as a major creative force, director Ravindra Dave followed the Nagina success with Agra Road(1957), Post Box 999 (1958), Satta Bazaar (1959), Dulha Dulhan (1964) and Raaz (1967). Besides helming such films of tremendous archival value, Dave wore many hats – those of a producer, production manager, editor and  screenplay writer. In addition, he brought about the  golden revival of Gujarati cinema. 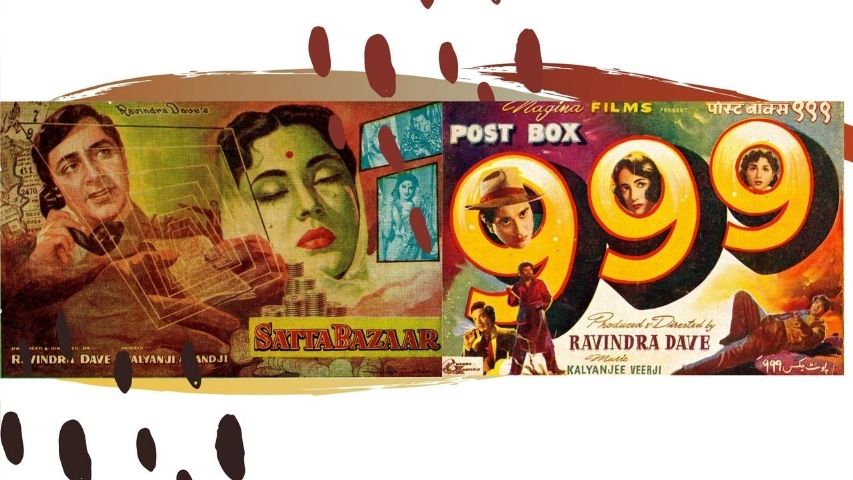 Dave was merely 23 years old when he made his mark with Poonji (1943), co-directed by Vishnu R. Pancholi. An instantaneous hit, its story revolved around three sisters who want to prevent their old father from remarriage.

With his second outing Dhamki (1945), he became an independent director and ploughed the field of the suspense genre. This murder mystery drama was clearly inspired by Hollywood’s noir films which crept through dark alleys and employed dim lighting to achieve a chilling eerie atmosphere.

Dave would come up with an occasional  social drama as well. Example: Meena Bazaar (1950) starring Nargis and Shyam, which fetched him laurels galore. Yet, it would appear his forte was suspense whodunits, accounting for his rapid output of the crime thrillers Motimahal (1952), Char Minar (1956) and Agra Road (1957), in which he introduced Vijay Anand as the leading man.

However the film faced production delays. 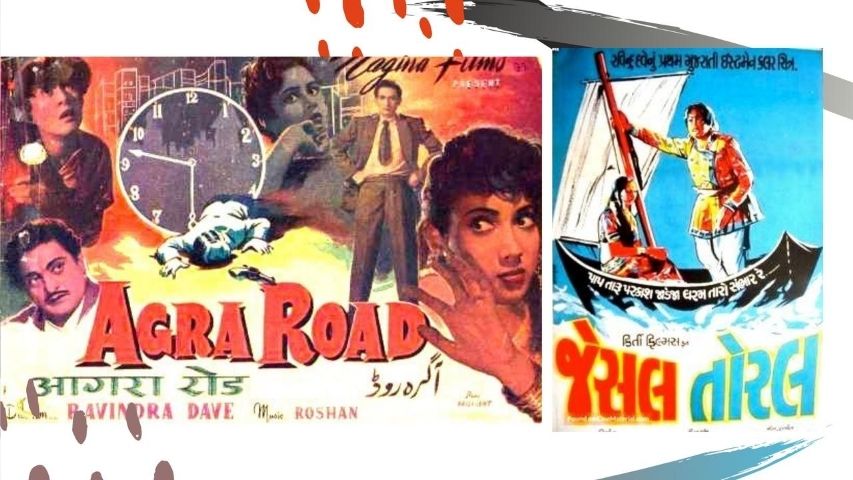 Consequently, Rajesh Khanna made his debut with Aakhri Khat (1966) and Babita with Dus Lakh (1966); a year ahead of  Raaz.

Frequently directing for the banner of Pancholi Films, he had become a one-man hit factory, with the resounding success of Farishta (1958), starring Sohrab Modi, Ashok Kumar and Meena Kumari. Naturally, the next step was to set up his own production company, Nagina Films, which was highly prolific with a spate of films like Satta Bazaar (1959) starring Balraj Sahni and Meena Kumari and Dulha Dulhan (1964), which paired Raj Kapoor and Sadhana for the first time.

A tireless filmmaker, he switched to Gujarati cinema by chance. When his attempt to remake Nagina with Leena Chandavarkar and Sanjay Khan was  shelved because of financial wrangles, the setback inadvertently proved to be a boon.  As a director, his second innings began with a sixer, the Gujrati film Jesal Toral (1971), which initiated the acting careers of Upendra Trivedi and Ramesh Mehta (his first as a comedian).

The immensely popular Upendra Trivedi considered Ravindra Dave as his mentor, featuring in as many as 16 of the director’s 26 Gujarati films. And Avinash Vyas, scored the music of 20 of the films.

Simultaneously, Dave was engaged in Hindi language cinema. Unbeknownst to many, he gave a break to  singer Manna Dey as music composer for Naina (1953), starring Geeta Bali and Abhi Bhattacharya. In his last Hindi film, Road to Sikkim (1969), he launched newcomers Anju Mahendroo and Dev Kumar and also introduced the former Maharaja of Sangli, Vijaysinghraje Patwardhan  (father of Bhagyashree of Maine Pyaar Kiya), as the music director.

With a busy filmmaking career of 45 years, his style of filmmaking had a certain stamp: story-telling with simplicity and clarity of thought. About the only indulgence he would allow himself, was driving in different vintage luxurious cars. 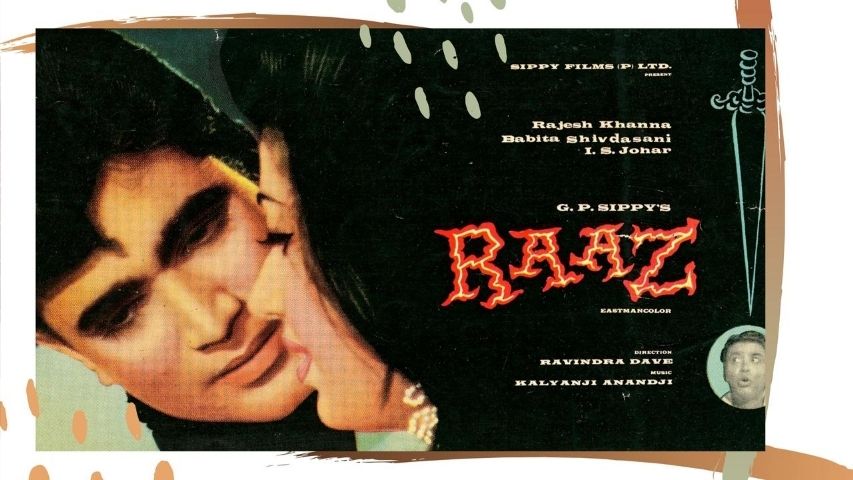 Towards the end phase of his career, he was planning a comeback with a crime thriller in Hindi. From direction, screenplay writing to dialogue and editing he wished to be acknowledged as an all-rounder auteur with Mera Pati Mera Qatil.

According to his assistant director and regular collaborator Shridutt Vyas, “Dave sir was well-versed in the art of writing a gripping screenplay and the seed of the story was his own. Since his handwriting was quite illegible,  he would dictate the narrative to me. He narrated the script of Mera Pati Mera Qatil, to Rakesh Roshan. This film was to be sir’s swan song. Unfortunately, due to his critical health and financial problems, the project never took off. Yet, I must tell you that Rakesh Roshan made Khoon Bhari Maang (1988), with the same story. Only the title was changed.”

But wasn’t Khoon Bhari Bang lifted from the Australian mini-series Return to Eden (1983)? “It’s believed Rakesh Roshan made a film on the same story and changed the title to Khoon Bhari Maang(1988),” said Vyas, adding, “But Dave had first chanced upon the story and realised its potential for an adaptation.” Be that as it may, Roshan’s film bolstered the careers of Rekha and Kabir Bedi.

Ravindra Dave passed away at the age of 73 on July 21, 1992. And this is my small tribute to revive the memory of an auteur, who was an icon in his own right but has been denied that honour.