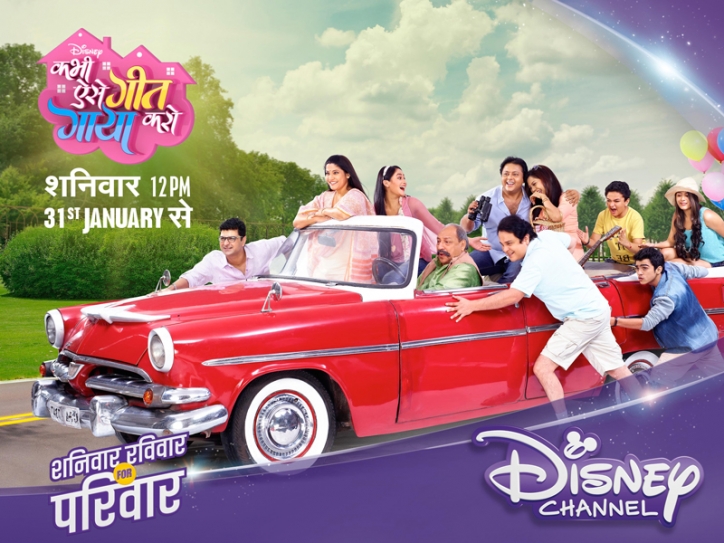 It?s been a week of stray watching besides follow ups. ? I can?t understand why a channel like Disney Channel plays low key when they launch a new indigenous show. I am referring to Kabhie Aise Geet Gaya Karo. Produced by Cinevistaas, an old player, who recently finished their prime time outing with Ek Haseena Thi; the production house has now ?come up with this ?seemingly ?endearing show on Disney Channel ?which boasts of a good ?cast, headed by Sudhir Pande, ?featuring Mahesh Thakur, Manini Mishra and Renuka Shahane who makes a comeback after a hiatus. ?Touted as a family entertainer, it is slotted for Saturday-Sunday 12 noon; I caught the ending, and no more. The Electronic Programme Guide had no entry for the repeats of the episode. Sometimes the EPG showed the name of another programme and accidentally I strayed into ? Kabhie Aise Geet Gaya Karo, again the ending. The head of the family is very attached to his car ? a shiny red convertible who he calls Ram Pyari; he talks to her, keeps cleaning her, and is appalled when unknowingly someone calls her khatari. As a Parsi, I empathise with Sudhir Pandey?s character and his deep, abiding love for his car. At one time, Parsimen were known to care more for their cars or bikes than their wives! The bottom line of KAGGK is ? family values, old is gold and staying together. This feel good series certainly needs to be watched. Cinevistaas is no stranger to the game; they are old Doordarshan providers and hadto publicize their shows on their own. So why depend on the channel to give you a leg up with the viewers?

Colors replaced Uttaran with Code Red, a non-fiction, social issue based show hosted by Sakshi Tanwar. This is the first prime time daily series to tackle social issues like Crime Patrol does on the weekends on Sony. The few episodes I watched were gut wrenching ? the crackdown on an orphanage and drug addiction in young school going children. ?The show needs more spontaneity, action and quick cuts, as in Crime Patrol. Sakshi Tanwar, where isthe fire in the belly spirit for dastardliness to come out? ?Somehow watching Code Red the other night, I remembered my friend the late Priya Tendulkar, who was ever ready to take up a cause to show case on her show. ?Colors have pitted Code Red at prime time and the repeat at lunch time they need to add either another repeat slot in the early evening or change it to mid-afternoon. Of course, before that they need to specify the target audience. ?

Sony?s Bharat Ka Veer Putra ? Maharana Pratap now has company at prime time with Colors? Chakravartin Ashoka Samrat. ?Siddharth Nigam has barely finished playing a young Rudra in Mahakumbh on Life OK; now he?s essaying the role of the young Ashoka. ?Going by his performance in his earlier outing, he will be well up the scale to essay Ashoka. The promos have already showcased the actor?s aptitude. Furthermore, casting also includes the German born actor Suzanne Bernert, who plays Helena, the daughter of the Macedonian General Seleucus Nicator; the latter is played by Tej Sapru. The pivotal role of Chanakya couldn?t have been better cast; Manoj Joshi has been playing Chanakya, in the eponymous play since 1990.?

Chakravartin Ashoka Samrat is marked by ?excellent ?production values, which comes naturally as it is produced by Contiloe Entertainment , the production company behind other historicalslike Veer, Bharat Ka Veer Putra ? Maharana Pratap , andJhansi Ki Rani. Each of these has been authentic vis-?-vis costumes, settings, etc.?

In the mid-1994, Doordarshan did the unthinkable, when they slotted Shanti in the afternoon and ushered in a new prime time. Till then they kept the viewers glued to their sets watching repeat telecasts of the previous night?s prime time shows. ?I wonder why our GECs don?t take a clue from DD?s wisdom and have afternoon repeats. ?Sometimes, I am caught straddling between two shows or even three to catch the action.?