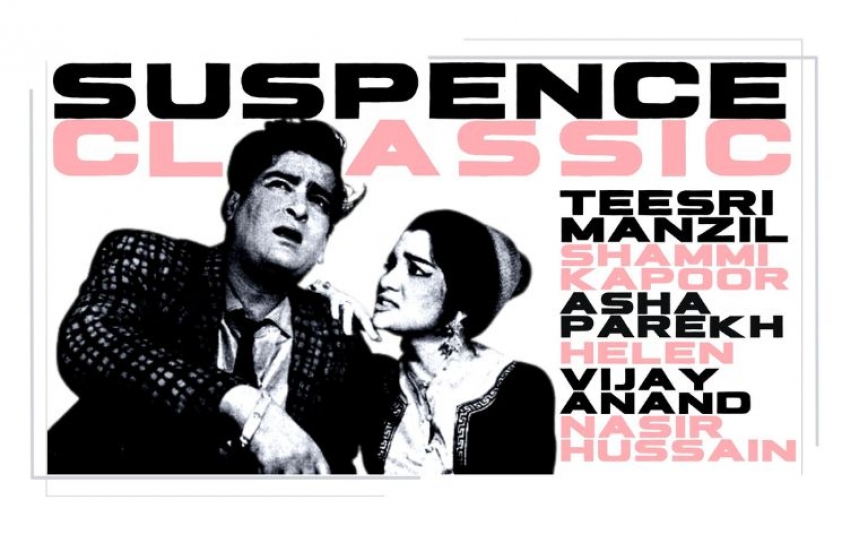 His last film Jaana Na Dil Se Door (2001) remains unreleased. Pet-named Goldie Anand he was a superlative director. Although most of his films did very well commercially, he remained wasn’t largely feted during his lifetime (1934-2004).

Top actors would compete for his attention. He possessed the ability to look beyond stereotypes, while pushing actors to re-invent themselves. In his impressive career he directed almost 18 films under his family banner of Navketan films and starred in 19 films as an actor. Of his endeavours, the most celebrated one is Guide, besides also the slick whodunits Teesri Manzil and Jewel Thief.

Teesri Manzil was the first film he directed for an outside banner. It was produced by Nasir Hussain and headlined Shammi Kapoor, Asha Parekh, Premnath, Helen, Salim Khan, Prem Chopra, Raj Mehra, Iftekhar, Laxmi Chhaya, and Sabina. As the story goes, Nasir Hussain had kickstarted his own banner after leaving Filmistan and had just completed Jab Pyar Kisise Hota Hai (1961). 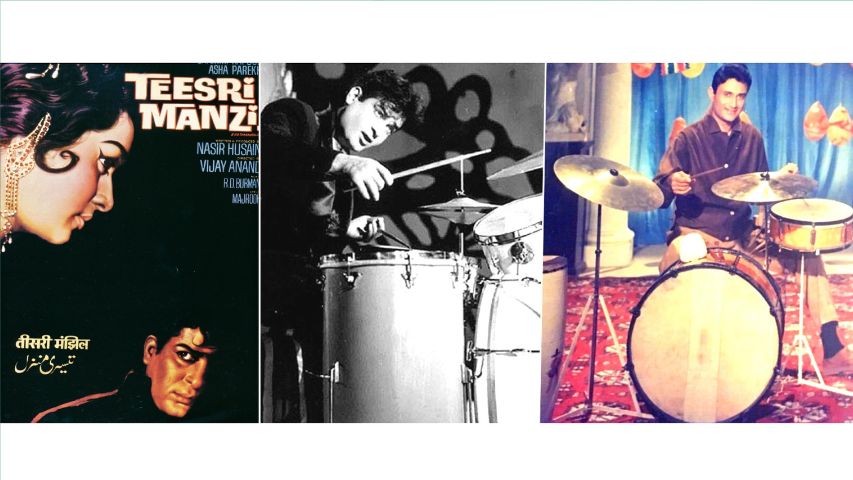 On seeing the trial show of Hussain’s film, Goldie had assured him that the film would become a big hit. Hussain had even asked him to help out with the placement of a song sequence. On Goldie’s advice, the popular song Teri Zulfon Se Judaai To Nahi Maangi Thi was added. Eventually, all the songs by Shankar-Jaikishen were hits and so was the film. Consequently, Goldie was asked to direct a  film outside the Navketan Banner. He agreed instantly with the proviso that Dev Anand should be the film’s hero.

Nasir Hussain had hosted a party at his house to celebrate the engagement of Sadhana and R.K. Nayyar. While the party was in full swing, Dev Anand and Nasir Hussain began arguing loudly. Dev walked out of the party in a huff. Apparently, they had a severe difference over some scenes for the film, which had been decided to work on.

Dev Anand decided not to work with Nasir Hussain. But Goldie  stuck to his commitment to direct the film.  Dev seemed fine with his decision. The search for a new hero began. Shammi Kapoor’s name was suggested to Goldie since Hussain and he had previously worked in the highly successful Tumsa Nahin Dekha (1957).

Shammi Kapoor readily agreed. Asha Parekh was to be the heroine. Goldie was keen to work with her as she was known to be a no-tantrum heroine who  followed the director’s instructions carefully. This was an unfamiliar territory for Goldie since he had never worked with any other hero besides his star brother.

Goldie narrated a brief incident to Nasir Hussain and Shammi Kapoor about a young woman wanting to avenge her sister’s death as the killer had gone scot-free. Since the drama unfolds on the third floor of a hotel, the title of the film was Teesri Manzil.

As the film progressed Goldie was aware about certain nuances, which were compulsory in a Nasir Hussain film, like a big hotel set-up, the heroine’s group of friends and lavish songs. Yet he was certain that while using these indigents, he could make a tight whodunit without hampering the main storyline. An independent director, he approached the film in his own style. 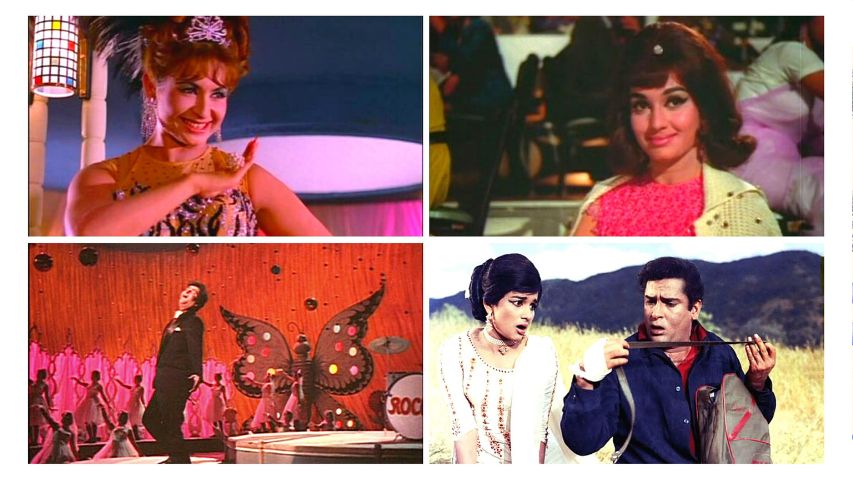 The hero had to be a drummer in the hotel, so it was obvious that he also had to dance. Plus, the character of a cabaret dancer, Ruby, was conceived and who could be a better choice than Helen? Goldie made the character of Ruby crucial by adding elements of her love for the hero and being a key witness to a murder. Another twist, which he created, was the character played by Salim Khan who pretends to be the drummer when the heroine comes searching for the hero. Every actor had a well-defined role.

Goldie was keen to sign an actor who had not played a villain earlier, so the audience would never suspect the character. And Premnath was game to experiment. Nasir Hussain was keen on O.P. Nayyar  to score the music but Goldie insisted on R.D.Burman who had already been firmed by him for some films for Navketan. Goldie had perceived his potential though Hussain was unsure if Shammi Kapoor would be okay with their choice as the actor was known to have a great music sense and was always particular about his music directors. Shammi Kapoor finally agreed to R.D.Burman with the condition that he would first hear the tunes himself.

A meeting was fixed with R.D. Burman and Shammi Kapoor to hear the tunes. Nasir Hussain was stressed and therefore met Pancham a day before the meeting with Shammi to make sure all would go well. At Hussain’s house, R.D.Burman and his team played the tune of O Haseena Zulfon Waali. Shammi just remained silent and smiled. Other tunes were also played, the actor’s smile became wider with each of them. Applause followed as the upcoming composer played many tunes, some of  which were later used by Hussain in Yaadon Ki Baaraat and Hum Kisise Kum Naheen. Shammi had hugged R.D.Burman affectionately at the end of the music session.

Initially, Shammi Kapoor was wary of Goldie’s style of working. He would often look at Nasir Hussain for validation after every sequence was shot. But once he saw the rushes at a private screening, he was at ease.

Shooting for Teesri Manzil was a tough task for its hero since he had lost his wife Geeta Bali to small pox. The sets had to be dismantled and the shoot cancelled. On his return to the sets, Shammi was inconsolable with grief and sobbed like a child. He was under depression for days to come. He had lost his confidence, his hands would shiver while lighting a cigarette. Nasir Hussain and Goldie Anand decided to shoot some of the most difficult scenes during that juncture to get their actor’s confidence back on the tracks. The song Tumne Mujhe Dekha was shot and Shammi was back to his usual lively self. 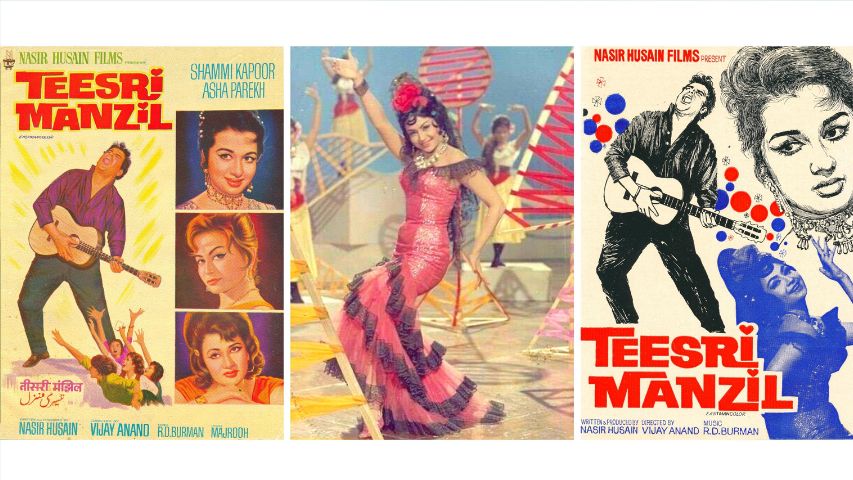 Asha Parekh during the shoot of this song had broken into an allergy. Red spots had erupted on her face and shoulders just before the afternoon shift. She was given a strong dose of allergy pills after which the last ‘antara’ with Shammi Kapoor in the same frame was shot, even though she felt weak and hazy as an after-effect of the pills.

Shammi Kapoor essayed a complicated role with the different identities of Rocky/Sona and Anil Kumar while Asha Parekh played Sunita, the younger sibling of Rupa who had jumped off the Teersi Manzil under mysterious circumstances. Helen enacted Ruby, the dancer at Park Hotel who is in love with the lead drummer Rocky and is out to seduce him while keeping a hawk’s eye on his personal life. Prem Chopra played Ramesh, the dead Rupa’s fiancé who had threatened to kill her. Premnath was the classy aristocrat landlord Kunwar Saab who helps Rocky to impress Sunita. Salim Khan of Salim-Javed fame played Rocky’s friend in a brief role.

Teesri Manzil with its  suspenseful twists and turns was a blockbuster at the ticket windows and is a cult film loved by one and all today. And Goldie Anand was deservedly acknowledged as a game-changing director.