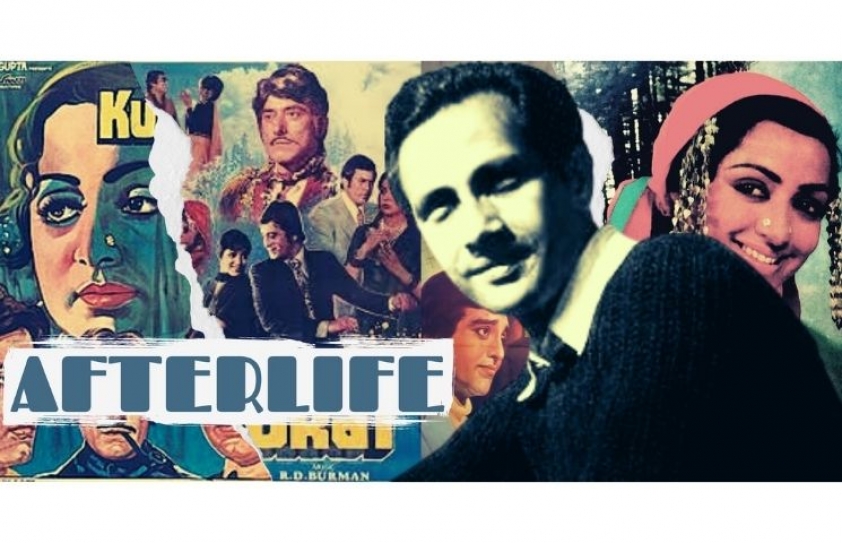 This one’s a keeper. An alluring film, directed by Chetan Anand in the company of cinematographer Jal Mistry and music director R.D. Burman, the riveting courtroom drama, Kudrat, was released in 1981. After the debacle of Sahib Bahadur (1977), Chetan had moved on to the idea of reincarnation. This was the first time he was helming a multi-starrer top-lining Rajesh Khanna. The actor had always shied away from multi starrers but was going through a low phase in his career too. He had worked earlier with the director in Aakhri Khat (1966). Hema Malini was the leading lady with Vinod Khanna forming the third angle of this unusual love story.

Though there were some differences of opinion from the Bollywood trade about casting Rajesh Khanna opposite Hema Malini, because the pair’s film, Mehbooba (1976), directed by Shakti Samanta, based also on the subject of reincarnation enhanced by a memorable music score by R.D. Burman, had tanked at the box office. However, Chetan Anand and Priya Rajvansh, who had collaborated on the script, stuck to their casting decisions.

The story begins with a train passing through a tunnel after which the heroine, an excited Chandramukhi is shown the view of the valley of Shimla by her parents played by Pinchoo Kapoor and Shammi.  Although Chandramukhi is visiting Shimla for the first time, she feels she is already acquainted with the hill town. Next, her parents are keen to get her married to Dr. Naresh is a psychiatrist from America and the son of a family friend who they meet in Shimla. 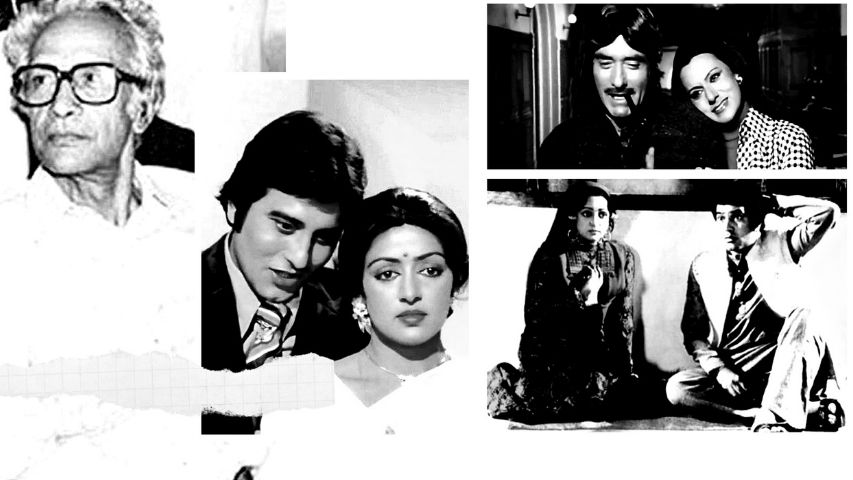 Enter Mohan Kapoor, a lawyer from Chandigarh who arrives there to meet his guardian, a widower Chaudhary Janak Singh, one of the richest and the most respected citizens of Shimla. Chaudhary’s daughter, Karuna, is a lawyer too by profession. Chaudhari is keen to get his daughter married to Mohan who has just been recently appointed as a public prosecutor in Shimla. Next, the paths of Chandramukhi and Mohan cross at a concert of singer Saraswati Devi at the Gaiety theatre.  Oddly, the singer Saraswati Devi goes into a trance on meeting Mohan and performs an old forgotten song.

Worse, Chandramukhi begins to get scary dreams of chasing a running man in the deep mist. Dr. Naresh is called in to treat her. With the increasing frequency of these nightmares, he tries to treat her with hypnosis but is shocked on realizing that his patient has retreated into her past life, circa 1945, when she was called Paro, the twenty-something daughter of the gardener of the Haveli. She was then engaged to a local boy Madho.

Dr. Naresh panics but eventually manages to draw her out from the past. Meanwhile, Mohan and Chandramukhi often accidentally meet at random tourist spots, and she is deeply attracted to him. Complications ensue: Mohan is about to get engaged to Karuna but volunteers to help Dr. Naresh to cure Chandramukhi. As time goes by, Mohan also loses his heart to Chandramukhi and begins to believe in their connection in the past life.

As the plot thickens, it entangles the lead protagonists in a web of suspense and mystery. The second-half turns into a courtroom drama, brilliantly unraveling the suspense through the analysis of past life regression. The courtroom scenes between Rajesh Khanna and Priya Rajvansh are terrifically impactful with some strong lines of dialogue like, ‘Kanoon jurm dekhta hai, insaan ko nahi dekhta… uske saamne raja aur rank, ameer aur gareeb, maalik aur gulaam… sab barabar hain.” 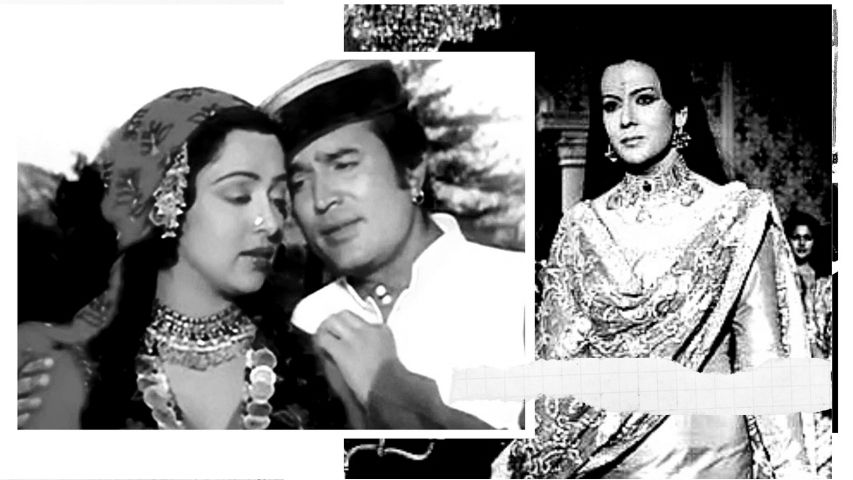 When the Shimla schedule finished, and the film was to be resumed in Bombay, the producer developed cold feet because of the escalation of costs and decided to stop any further filming. Gratifying, this impasse was resolved and Kudrat was back on the tracks.

The climax was gothic and chillingly shot in a dark blue ambience as Priya Rajvansh walks down an old staircase with a lantern in her hand, contemplating on what should be her next move. Suffice it to say the wrap-up leaves the viewer dumbstruck. Even though Priya Rajvansh was never appreciated for her acting abilities in her brief film career, in Kudrat she delivered a noteworthy performance.

Despite the film’s technical sheen and a brilliant courtroom confrontation, which kept you on tenterhooks, it was rejected at the ticket counters. According to Bollywood lore, Rajesh Khanna, on seeing the rushes felt that the project had tilted in favor of Priya Rajvansh. According to the original script, she was supposed to dominate the scene anyway.

Rajesh Khanna wanted the courtroom sequence to be altered but Chetan Anand didn’t succumb to his demands. So, one night, covertly the actor who was losing his grip on his superstardom, accompanied by producer B.S. Khanna, re-edited the final product, chopping off several of the scenes at the Filmalaya Studio, of all the artists including Vinod Khanna who was on the ascent then with the major success of Qurbani (1980), and stretched his own role beyond belief. Although Chetan Anand took the matter to court, he lost the case on a technical point. In the contract, there was no clause stating that the film could be released only if the director was satisfied with it.

Rajesh Khanna lambasted the director and his muse, Priya Rajvansh, in print. Finally, Kudrat released on May 3, 1981 as it was edited by Rajesh Khanna, and proved to be a commercial debacle. The Rajesh Khanna-Chetan Anand relationship was severed irreparably. The director did not even attend the film’s premiere. Although it was no secret that the original film had been tampered with, no one spoke about it on record. 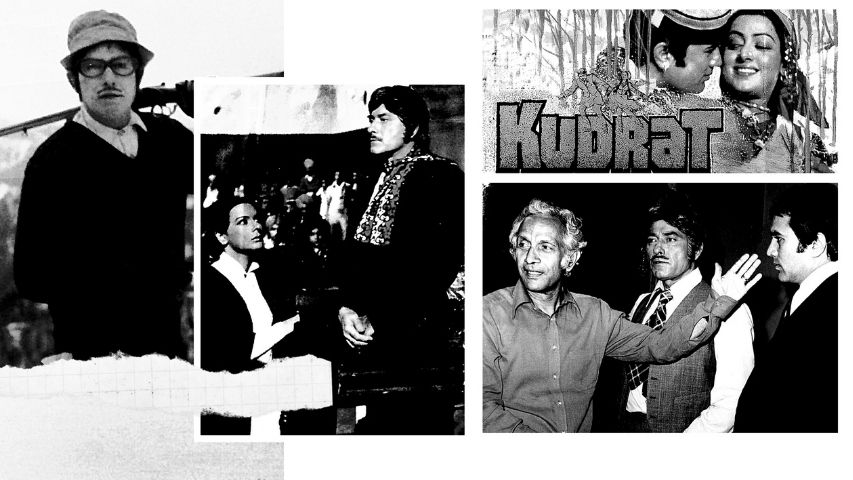 Despite the fact that Kudrat was a financial loser, it bagged the Filmfare Awards for Best Female Playback (Parveen Sultana), Best Story (Chetan Anand) and Best Cinematography (Jal Mistry). Forty years later, it is also regarded as a milestone film because of its excellent musical score rendered by R.D. Burman.

The soundtrack is rated as one of the top five albums of Panchamda. The cult romantic song Humen Tumse Pyar Kitna, contrary to popular belief, was rendered in three different versions:  a semi-classical one by Parveen Sultana shot on Aruna Irani, the second one by Kishore Kumar pictured on Rajesh Khanna and Hema Malini, and the third comprised four lines sung by Asha Bhosle and pictured on Priya Rajvansh, which was seen in the film but went missing from the vinyl albums and the cassettes.

The theme song Dukh Sukh Ki Har Ek Mala, which can be heard almost four times during the course of the film was originally sung by Chandrashekhar Gadgil but was re-recorded in the voice of Mohammed Rafi. Those days, this was not permitted according to trade rules. Yet, Mohammed Rafi’s version was retained for the screen but the vinyl albums and cassettes had the one by singer Chandrashekhar Gadgil. This was the one and only song by lyricist Qateel Shifaai written for R.D. Burman.

Sajti Hai Yunhi Mehfil, rendered by Asha Bhosle, had both slow and fast versions. The slow version was pictured on Priya Rajvansh for the engagement party scene while the faster one was shot on Priya again during the gothic climax but was edited by Rajesh Khanna with only a small portion retained.

There were other imperishable songs like the highly zestful Tune O Rangeele by Lata Mangeshkar, the fun village song Sawan Nahin Bhadon Nahin by Asha Bhosle and Suresh Wadkar, and the disco song Chhodo Sanam by Annette Pinto and Kishore Kumar were pictured on the sizzling Kalpana Iyer and Vinod Khanna.

Indeed, Kudrat stands out, in reappraisal, as a superior-quality study on the subject of reincarnation, and could be quite easily remade today.