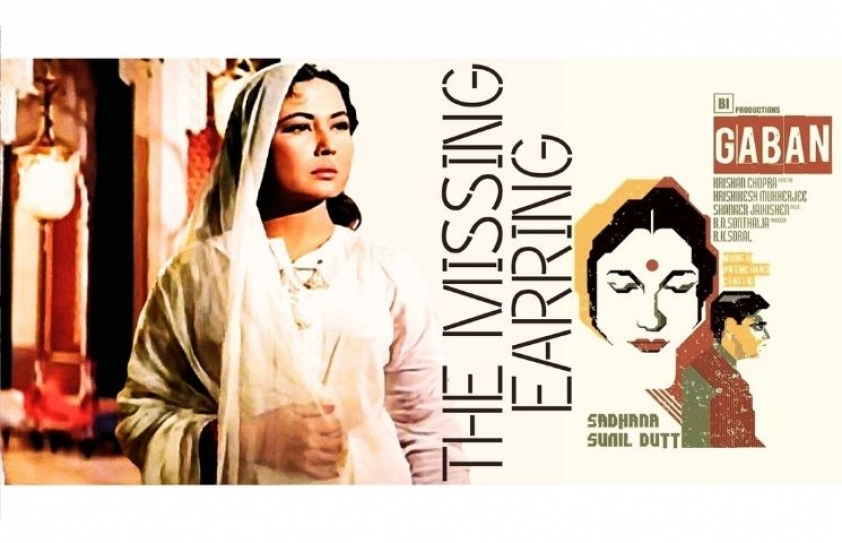 Juhi Saklani looks back at Hindi films to trace the role of the jhumka, gale ka haar and paayals in storytelling, which convey various things to the audiences.

Search for my lost earring, my love - Dhoondho dhoondho re sajna, Ganga Jamuna (1966), sings Vyjayanthimala as she dances in graceful exhilaration. Why is she so delighted despite having lost her earring? Because it is the morning after her first night of intimacy with a much-loved husband Dilip Kumar, and the earring is clearly a metaphor for the sexual innocence that has been cheerfully lost. The actual earring is only discovered by the audience at the end of the song, hooked eloquently to the back of sajna's kurta.

Another cheerfully lost earring became a national rage, again when Sadhana lost her jhumka, Bareilly ke bazaar mein - Mera Saya (1966). The scenarios she evoked to explain the loss involved her lover being rough with her, as well as him being amorous. And then another lost earring was an enchanting poetic creation of the Shailendra-Salil Chaudhary team. In Mila hai kisi ka jhumka, Parakh (1960), Sadhna spins a lyrical conceit around a flower lying on the ground. The flower is the fallen earring, which has a complaint against its owner: She went off with her lover and left me behind - aap gayi piya sung, mujhe yahan chhorra.

Much later, Hema Malini in Jugnu (1973), became worried because after a tryst with her lover, her earring had fallen: Gir gaya jhumka (Girne do - let it fall, says the insouciant Dharmendra). But it’s difficult for her, as the missing ornaments will make people ask her where she has been? And so they would because in this one song she complains of having dropped her earring, misplaced her ring, lost her chunri, smudged her kaajal, and torn her gajra. She is clearly to be congratulated! 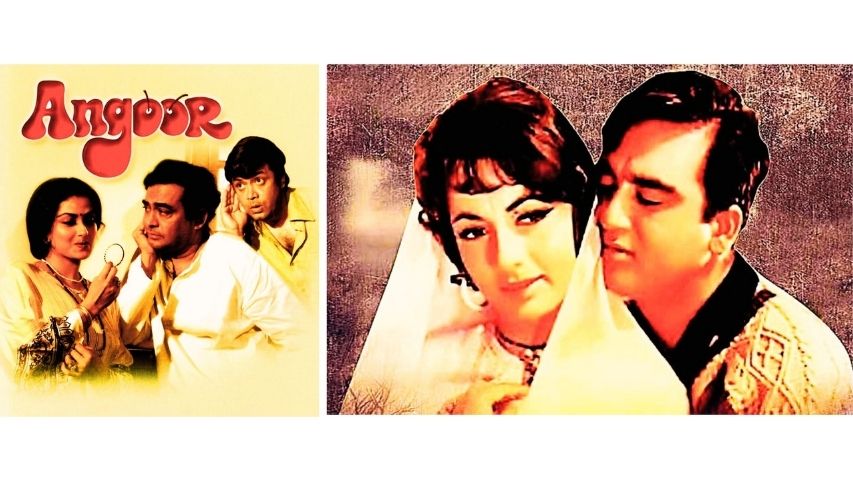 And, when you do not lose the jewelry, there is a whole universe of sound and affect that you can create with it. There is a separate place in heaven for Indian nayikas who tiptoe in the dark hours to meet their lovers, and are afraid that the tinkling of their ornaments would give them away. Meena Kumari in Pakeezah (1972) - the immortal Tharre Rahiyo: Jaage na koi, raina hai thodi, bole chhama chham, payal nigodi.

Twelve years later, Rekha, in the film Utsav (1984), describes Jhanjhar jhamke sun jhamke, aadhi raat ko. This is a tradition repeatedly invoked in thumris, for instance, Jhanana Jhanana Baaje Jhankaar, has the heroine troubled about her noisy ornaments, trying to explain to her amorous insensitive husband that her saas-nanad (mother-in-law and sister-in-law) will be caustic about this.

Man, woman and jewelry make up a complex triangle in patriarchal set ups. The heroine is supposed to innocently demand jewelry from the hero – "Mujhe naulakha manga de re", asks Jaya Prada from Amitabh Bachchan in Sharaabi (1984) – and the hero has to feel like a provider. Gifting rings or necklaces is also a way of announcing his seriousness about her - "Aa meri rani, de dun chhalla nishani".

At times, though, songs in the male voice celebrate the heroine’s simplicity (saadgi), as a signifier of which she does not wear any jewelry or makeup. Yet other heroines seem to turn into jewel-eating shrews after marriage. Gaban (1966) based on Premchand’s story, has the hero Sunil Dutt embezzling money to satisfy his wife’s desire for jewelry and Angoor (1982) has Moushami Chatterjee making husband Sanjeev Kumar’s life difficult because he doesn’t get her a necklace. 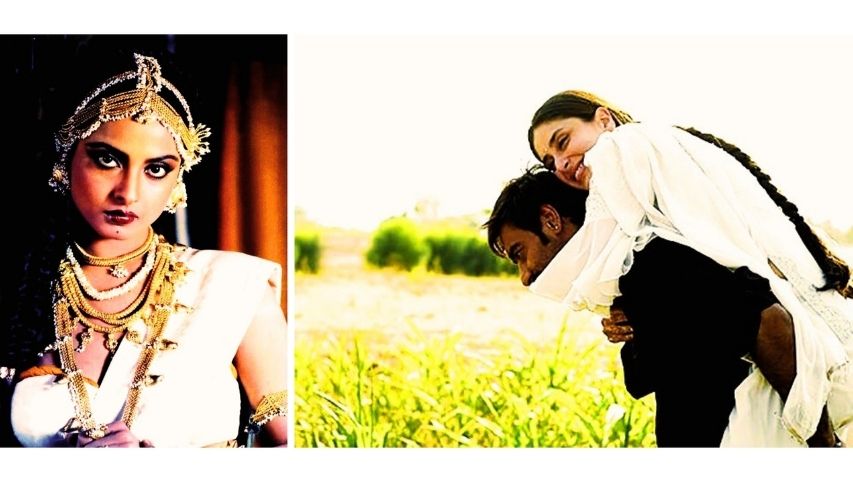 In Hindi films, jewels became crucial plot markers - the diamond necklace on a Maharani’s neck, which the hero had to steal (Raaj Kumar and Shashikala in Waqt (1965), the heirloom bangles with which a mother-in-law would show acceptance of the girl her son had married without permission (Rakhee and Smita Patil in Shakti), the waistband which, if misplaced, makes the Othello-hero believe his wife has been unfaithful (Ajay Devgan in Omkara), the wholesale robbery of jewelry shops (Jewel Thief and Special 26), the bracelet on a skeleton’s wrist, which, years later, makes the hero realize his much-idolized Chhoti Bahu had been murdered (Sahib, Bibi aur Ghulam).

Given all the significance attached to the jewelry, nothing is more important than a woman not wearing any. The most obvious statement made thus is, of course, about widowhood. But separation from one’s love is just as potent a reason: "Sajan mohe tum bin bhaye na zevar" goes the ditty from Bazaar (1982). Bazaar also includes the most heartbreaking and traumatic scene related to jewelry. A very young and very poor Supriya Pathak is forcibly married off to a rich, much older Dubai-based businessman. Her female relatives come to measure her ankle for anklets, and the girl is like a young wounded fawn, cowering, trapped into a corner of the room and begging to be left alone. 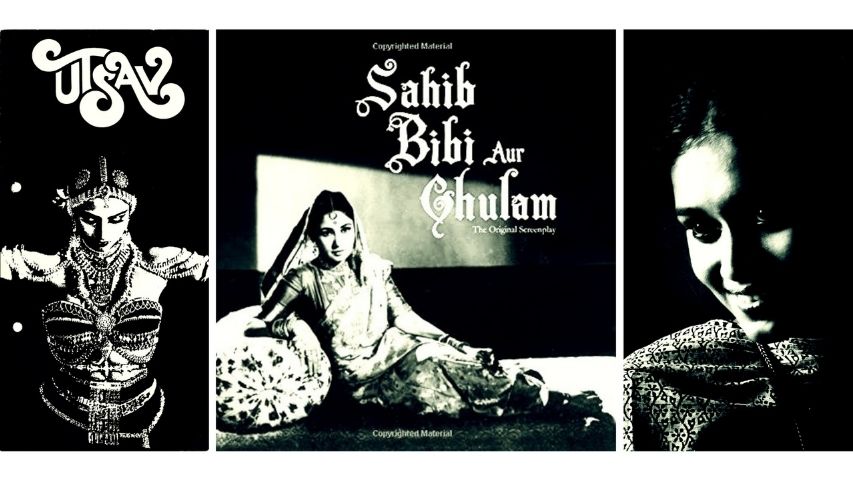 No one gives up jewelry with as much symbolic flair as the immortal figure of the golden-hearted prostitute. Rekha the courtesan, giving up her jewels, the subject of much chasing, to make a golden toy cart for her lover’s child in Utsav (1984). Meena Kumari, the courtesan, never wearing any jewels in her daily life, underlining her personal truth of being ‘the’ Pakeezah, the pure. Chandramukhi giving up all ornaments and material pleasures once she realizes her unfulfilled love for Devdas. Indeed, in this story, even Paro gave all her jewelry to her stepdaughter and turned to a kind of asceticism after marriage to an older man (though the Sanjay Bhansali version spectacularly ignored this aspect).

We are not quite done with the traditional tropes yet. Even in this decade, when songs are replete with kala chashma and four bottles of vodka - and actresses like Sushmita Sen and Priyanka Chopra often point out in interviews that they don’t need a man to buy them a diamond ring - the hit Chittiyan kalaayian (2015) nevertheless began with Jacqueline Fernandes demanding “golden jhumke” from her lover. And there is a whole separate world of Punjabi songs in which the male sings of expensive gifts that his lover demands!

But the lost earring is now well and truly missing. The films of this century have heroines, as well as the world around them, being far more open about their sexuality - the earring is not really needed any more to announce that the protagonists have made love.