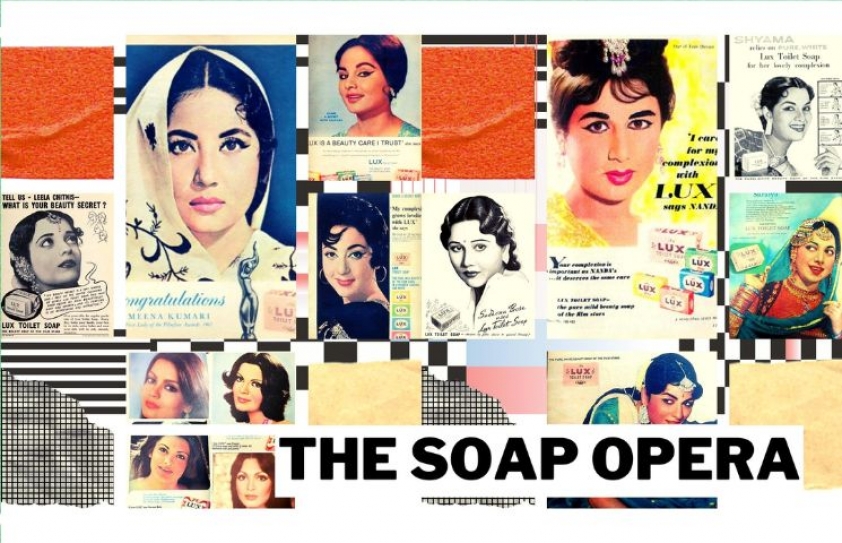 Film historian, Dhruv Somani, tracks the Bollywood stars who have endorsed the iconic Lux toilet soap over the decades.

‘Filmi sitaron ka manpasand sabun’, this was how Lux was publicized when it entered Indian borders in 1929. Its earlier campaigns featuring Hollywood stars as Lux faces was an international venture of Lever Brothers.  Here was one of the earliest forms of branding and celebrity endorsements.

The soap had started its journey as Sunlight Flake; it was a detergent in 1899 with the Lever Brothers. Around the early 1900s its name was changed to Lux, and launched with fanfare in the US around 1925 and the UK in 1928 as the first luxury toilet soap in the world.

Soon distribution began in the US with a tagline, stating it to be made with a French method, which was affordable with a rich texture and fragrance resulting in a smooth skin for women. The ad campaign featured painted portraits of Hollywood actresses as promotional strategies.

Given an obsession with lighter skin in India, it was an understandable strategy for the company to target the cosmopolitan strata of the society using the same campaign. Indians were always starstruck and it was a perfect time to spread their wings here in India. Moreover, the fast-growing local film Industry became a direction for Lux in countries like India and China as they began using their own actresses rather than Hollywood stars. In fact, Lux girls also began to be featured in Pakistan, Sri Lanka and Nepal long before globalization. Some of it also travelled far with exports of Indian magazines like Filmfare.

Actress Sheila Ramani who became popular with a cameo as a night club dancer in Dev Anand’s Taxi Driver (1954) was one of the first actresses to be seen in a Lux advertisement in a popular Pakistani magazine Naqoosh, a special issue soon after Manto’s death in 1955.

Devika Rani and Durga Khote were believed to be the first Lux models with the onset of the talkies but in 1941 the offer to become the face of the brand went to their contemporary Leela Chitnis. In those days being featured in a Lux ad was indeed a must-do, for a female movie star in India since it was considered to be an announcement for her status in the industry.

Leela Chitnis created a history of sorts in more than one way. She was not only the first educated actress to make it in the industry but also the first Lux star to endorse the soap. Starring in successive hit movies like Kangan (1939), Bandhan (1940) and Jhoola (1941), she was one of the most sought-after actors in her time with her natural acting style and her successful pairing with actors like Master Vinayak and Ashok Kumar - who himself once confessed, of learning a lot of acting from the star. Lux was able to successfully position itself as the beauty soap of the stars. Shobhana Samarth, Kanan Devi, Sadhana Bose and Begum Para featured as the Lux stars. 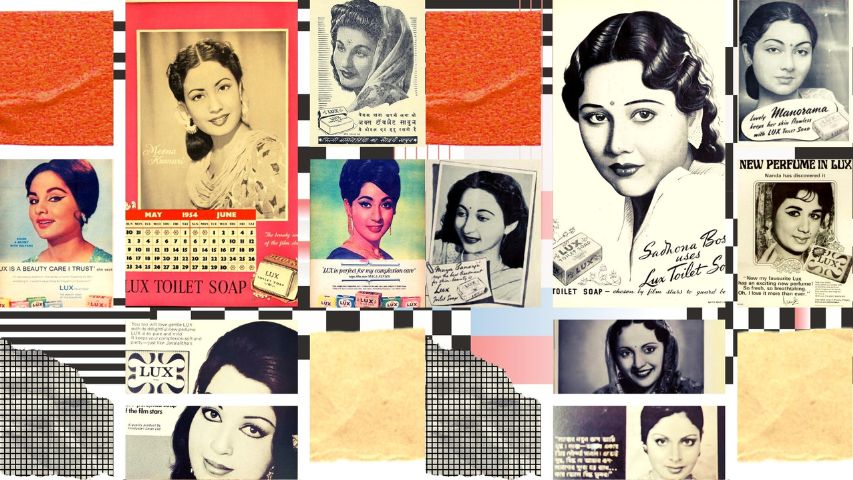 During the ‘50s stars appeared in the Lux calendars just around the time when color photographs had arrived. This was a first-of-its-kind calendar from the Priya Paul collection, which featured six leading actresses and used it as a strategy for more exclusive circulation. Meena Kumari, Suraiya, Kamini Kaushal, Krishna Kumari, Shashikala and Rehana featured in the calendar.

Meena Kumari, Suraiya and Kamini Kaushal - the first three actresses were already established stars while Krishna Kumari went on to become a major star in Telugu cinema. Shashikala began her acting career in the 1940s, but went on to take a sabbatical due to her pregnancy. After her comeback she had to accept B-grade vamp roles and rose to stardom again. Rehana, hardly known to the public today, was popular due to the success of the Filmistan Film’s Shehnai and Sajan both in 1947. She became a Lux model the same year. In the mid ‘50s, Rehana migrated to Pakistan where her acting career came to an end but she did make a comeback to Hindi films later.

This era belonged to Bollywood’s eternal beauty Madhubala. It was her flirtatious smile, which made her the ultimate seductress. She was also a Lux star since she had a perfect face; her aura and enigma had the entire nation under her grip. Nargis was also a Lux star, popular with a twitch of the nose, a distant hallmark of her unconventional attractiveness. She was the queen of Bollywood in the ‘50s. Vyjayanthimala, gifted with perfectly expressive large, kohled eyes, along with her enchanting and elegant dance moves gave her an edge over her contemporaries. This South Indian beauty was the ultimate Lux star. Others who featured in the advertisements were Nutan, Shakila, Meenu Mumtaz, Manorama, Nirupa Roy, Shyama and Chand Usmani.

The decade spawned beauties, each one with a distinct identity. Mala Sinha with her flawless peach complexion and vivacious personality arrived as a breath of fresh air in the early ‘60s.  She stood out from her contemporaries since she was statuesque and slim. She excelled as a villager in Himalaya Ki God Mein (1965) and was simultaneously highly westernized in Night in London (1967).

Waheeda Rehman and Asha Parekh were the other top actresses of that time and were already Lux stars. Asha Parekh managed to bring about an ineffable change in the image of the conservative Indian heroine with her dance numbers and dazzling outfits, giving impressive performances in Teesri Manzil (1966), Upkaar (1967), Kati Patang (1970) and Caravan (1971). Waheeda Rehman, known for her magnetic screen presence and dancing skills, delivered impactful performances in films like Pyaasa (1957), Bees Saal Baad (1962). Kohraa (1964), and Guide (1965).

Sadhana was a fashion icon of her time known for her fringe haircut besides wearing fitting kurtas with tight churidars. She was slim, tall and known as the woman in white for doing a trilogy of films like Woh Kaun Thi (1964), Mera Saaya (1966) and Anita (1967) with director Raj Khosla.

With her elongated kajal, which added more depth to her almond shaped eyes and with prominent dimples, the demure Kashmir Ki Kali Sharmila Tagore became   one of the most sensual actresses of her time.

Saira Banu aka The Beauty Queen was often seen at the famous clothing store Enamore at Mahalaxmi. Dressed ultra-modern or in a chic saree, Saira Banu carried it all with panache.

Beehive hairdos, wing tip eyeliner, one-inch-long artificial eyelashes and western costumes, colored eye lenses, furs and body suits became synonymous with the queen of cabarets, Helen, starring in almost every second film made in those days. She, too, was the undisputed Lux star whom people adored.

Others seen in the Lux campaigns were Nanda, Jayalalitha, Sumira Mukerji, Tanuja, Kalpana and Zaheeda. 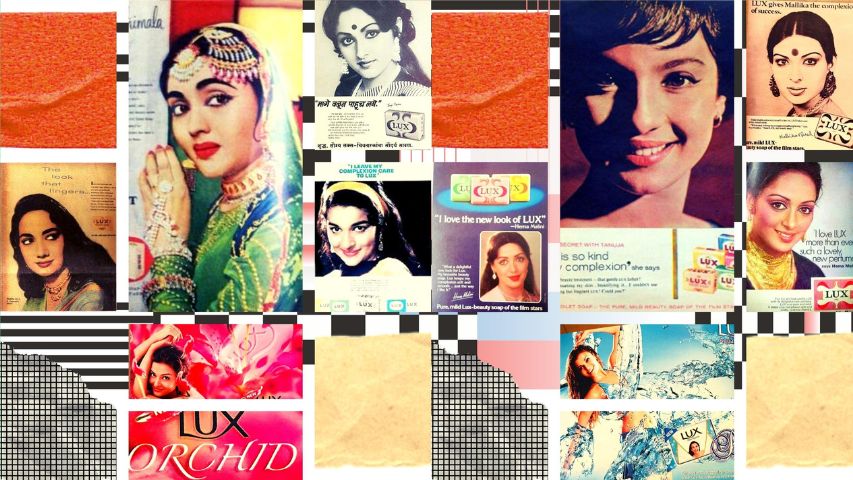 Babita Shivdasani made her debut in Dus Lakh (1966) and became a trendsetter vis-a-vis her style quotient with her tight churidar kurtas, hoop earrings and go-go glasses.

The era of the 1970s also saw the emergence of the sex goddesses of Bollywood cinema who managed to defy the notions of the conventional heroine. They were Zeenat Aman and Parveen Babi. Zeenat debuted with O.P. Ralhan’s Hungama (1971) opposite Vinod Khanna but gained success with Dev Anand’s Hare Rama Hare Krishna (1971) after which there was no looking back.

Parveen debuted with Charitra (1973) opposite cricketer Salim Durrani but gained popularity with Majboor (1974) opposite Amitabh Bachchan.

Both Zeenat and Parveen were Lux stars. Hema Malini was the No. 1 actress of that era who created the image of the conventional heroine by giving a variety of performances in films like Johny Mera Naam (1970), Lal Patthar (1971), Seeta Aur Geeta (1972), Dharmatama (1975), Mehbooba (1976) and more. Other actresses who also joined the Lux bandwagon were Raakhee Gulzar, Rekha, Yogeeta Bali, Shabana Azmi, Rameshwari, Zarina Wahab, Prema Narayan, Vidya Sinha and Mallika Sarabhai.

Bollywood shifted its axis towards beauty. It was a decade when filmmakers began to explore urban subjects along with the traditional ones. This decade saw some of the prettiest faces of Bollywood as the new faces for Lux.

Heroines from the South especially rocked the scene. Sridevi debuted in Solva Sawan (1979) but it failed to make a mark. Soon she was back opposite Himmatwala (1983), which was a big hit. Her rival Jaya Prada (one of the most beautiful faces of Bollywood) did not lag behind as she debuted opposite Rishi Kapoor in Sargam (1979).

Both of them starred in quite a number of potboilers together like Maawali (1983), Tohfa and Maqsad (1984), and Aulaad (1987). Some of the other faces from the South who tried their luck in Bollywood in the ‘80s were Bhanupriya, Khushboo and Madhavi. 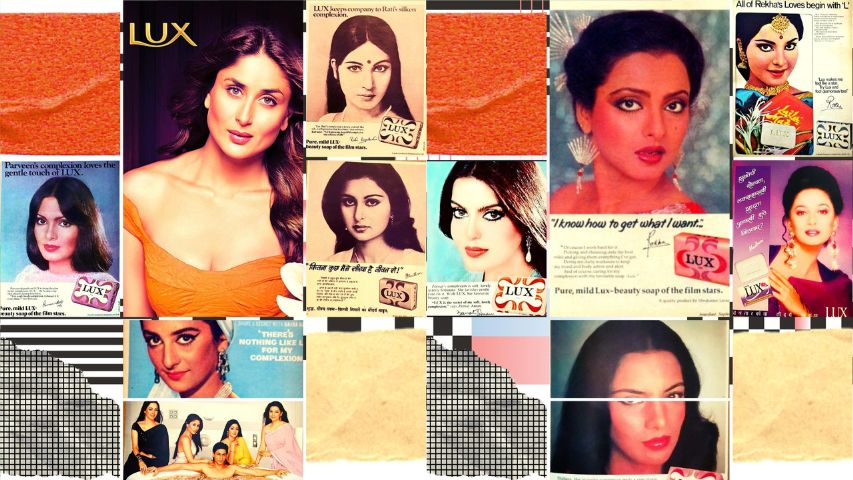 The ‘90s belonged to fun and frolic. Juhi Chawla broke the stereotype that models don’t act too, with the mega-hit Qayamat Se Qayamat Tak (1988).

Madhuri Dixit by then was already on a rise with her mega blockbuster Tezaab (1988) and was being closely compared to the Venus of Hindi films Madhubala. Others who became the faces of Lux beauties were Pooja Bhatt, Raveena Tandon, Karishma Kapoor, Kajol, Tabu, Rani Mukherji, and Urmila Matondkar - as soon as she sizzled her way to the top with Ram Gopal Varma’s Rangeela (1995).

With the onset of the new millennium, heroines became more confident and ambitious. Sushmita Sen and Aishwarya Rai after being crowned Miss Universe and Miss World in 1994 respectively, became the talk of show town.

Aishwarya became one of the most sought-after heroines because of her drop-dead gorgeous looks and her poise. Lara Dutta, Priyanka Chopra and Dia Mirza who also became beauty pageant winners, too, became Lux Stars.

Ditto Amisha Patel as soon as she tasted success with her debut in Kaho Na Pyar Hai (2000). Kareena Kapoor debuted with Refugee also in 2000, but she was already making waves. Kareena with oomph and her peaches and pink flawless complexion was a natural-born star from the Kapoor khandaan and made it to the top with her flamboyant personality.

Unusually, for the first time in the history of Lux endorsements, a male star was presented as the face of the brand. Shah Rukh Khan was the first Indian (only Hollywood’s Paul Newman had done a Lux ad before him) who modelled for the premium soap in a bath-tub filled with rose petals, surrounded by Hema Malini, Juhu Chawla, Sridevi and Kareena Kapoor.

Amongst the current crop of heroines, Deepika Padukone, Alia Bhatt and Katrina Kaif, have endorsed Lux. Of late, Anushka Sharma and Virat Kohli were also seen in an ad campaign for Lux, which has been permanently etched in the public mind as the soap of the A-list of movie celebrities.