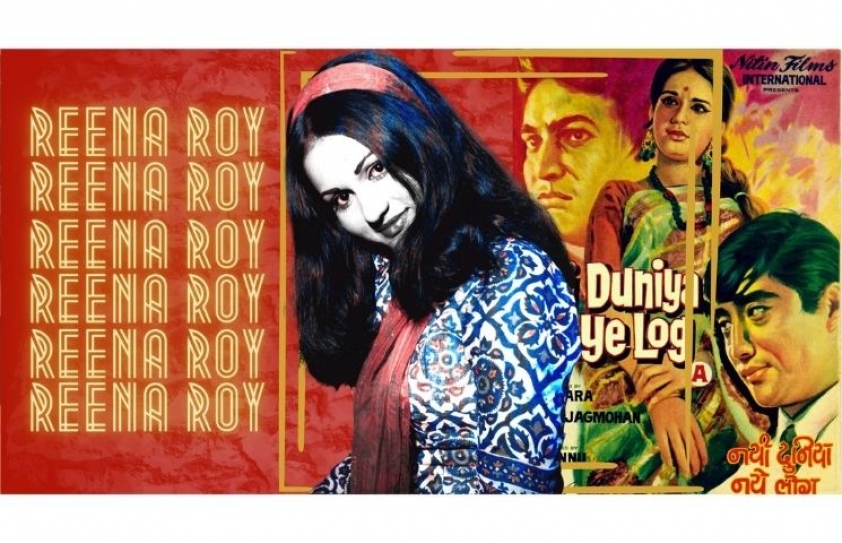 She was the underdog of her time. Yes, Reena Roy was one of the top actresses who let her work talk rather than her other activities, writes Dhruv Somani.

She was born as Saira Rai Ali to a Hindu mother and a Muslim father on 7th January 1957. Her first film director B.R. Ishaara christened her as Reena Roy. Here’s a tribute to the gleeful actress who whizzed her way into the hearts of the audiences with her craft.

She was barely sixteen years of age when out of the blue she was spotted by none other than Nargis Dutt while playing hopscotch with a group of girls outside her residence at 16th Road Khar. She offered her a film but Reena had to let go of that due to parental objections, as she was too young then. Not the one to give up easily, she soon had her way with her mother Sharda Rai and was signed by director B.R. Ishaara for Nai Duniya Nai Log (1972) with newcomers Danny Denzongpa and Satyen, both of whom had just passed out of the FTII Pune. It is said that she was a raw, peppy and carefree, a naïve youngster who initially would often goof up during the shooting with her tomfoolery.

As per an old interview of actor/director Danny Denzongpa, he recollects his initial days of shooting with her where they had to do a scene with a passing train. They had rehearsed their lines already and as per the orders of director B.R. Ishaara, they had to shoot come what may as this train would pass only once in two days. Everything was kept ready while the crew waited for the train to arrive. Reena had been instructed to continue with the shot even if she forgot her lines and not burst out into laughter, which was her nature. Soon, the train appeared and Reena forgot her lines and burst out laughing. Nothing could be done so lunch was announced. Everyone was a little upset and couldn’t eat but Reena was calm and her usual giggly self - she continued to laugh with the crew. Initially, everyone thought she’d never make it in the industry but she had a lot more of herself to give.

Nai Duniya Nai Log was shot but could not be released - a disappointment as the first film is always special. Her director Ishaara announced another film Zaroorat (1972). He had wanted to cast Rehana Sultana as the leading lady but due to her prior commitments and to Reena’s good luck she was signed as the leading lady opposite newcomer Vijay Arora. Zaroorat was a bold film and a very mature role, which Reena played well and finally other producers and directors noticed her.

After Zaroorat her next batch of films included Jangal Mein Mangal (1973), Milaap (1973), Madhosh (1974), Goonj, Gumrah, (titled as Andhi Jawani initially by Subhash Ghai and opposite Danny), Rani Aur Lalpari (1975) etc. It was Jaise Ko Taisa (1973), directed by south director Murugan Kumaran opposite Jeetendra (an association, which would prove to be very fruitful in the future) that got her noticed further. Her rain song Ab Ke Sawan Mein Jee Dare helped her start with taking small steps towards success. The same year came another film Zakhmee (1975), where she played the prankster tomboy character of Nisha Ganguly, and was paired opposite Rakesh Roshan, with Sunil Dutt, Asha Parekh and Tariq in support. Zakhmee also did well with music by Bappi Lahiri and by now Reena Roy had arrived with a bang.

It was the year 1976, which brought her to the big league with her film Naagin directed by Rajkumar Kohli. What Kohli saab said to me in a conversation was that Naagin was initially offered to a host of actresses like Saira Banu (she declined as she was getting married), Asha Parekh (she declined as she was petrified of snakes), Mumtaz too declined as she was getting married but did commit to do a special appearance opposite Feroz Khan for the film. Rekha was offered to choose any of the roles either the heroines opposite Sunil Dutt or the title role of the Naagin, but she played safe by choosing the role opposite Dutt Saab, so Reena was finalized for the title role of Naagin. 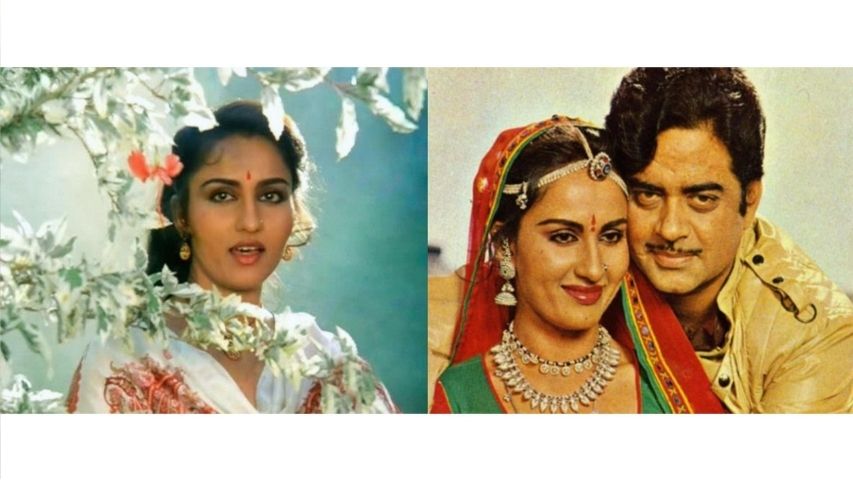 Many people, even her mother, advised her against playing the part as it was a negative role and she feared her daughter being typecast but Reena followed her instinct and moved forward. She wore blue lenses made with glass, which were a big hindrance as they had to shoot with strong wind and dust around her and that made her eyes swell. Her costumes were designed by Bhanu Athaiya, which added a lot of character to her role. Naagin became a blockbuster and the gamble paid off, as there was a line of producers and directors waiting with big money to sign her. She became the favorite of her hit director who was a multi-starrer specialist and landed up doing other big films like Jaani Dushman (1979), Muqabla (1979), Badle Ki Aag (1982), Nauker Biwi Ka (1983) and Raj Tilak (1984).

The same year came another film Kalicharan (1976), directed by Subhash Ghai, where she was seen opposite Shatrughan Sinha (she had already worked with him in Milaap). Kalicharan was an action film, which again created magic at the box office. The audiences loved the pairing and her song Ja Re Ja O Harjaiee became a chartbuster. It was the beginning of an association, which became both personal and professional. Producers lined up to repeat this hit pair for their upcoming films.

In the year 1977, J. Om Prakash signed her for film Apnapan along with Jeetendra, Sanjeev Kumar and Sulakshana Pandit. Here again she played the character of Kamini who abandons her husband and child to fulfill her own dreams, a character with grey shades, but she won the hearts of her fans and the critics with a spectacular performance. Apnapan proved to be very successful at the ticket counters and hence began a long association between her and J. Om. Prakash. She also won the Filmfare best supporting actress trophy which she did not accept as she felt she was the heroine and not a supporting actress in the film.

By the years 1978-80 Reena Roy was in top form and was considered an all rounder who could carry off any role with élan. She was much in demand and came up with yet another successful film Vishwanath directed by Subhash Ghai where she was opposite Shatrughan Sinha once again. It proved to be yet another success and led to them getting signed for hordes of films opposite each other. All the leading magazines of that time reported about their personal alliance but both parties maintained a dignified silence and continued to professionally work together in films like Chor Ho To Aisa, Bhookh, Muqabla, Heera Moti, Jaani Dushman, all of them in the years 1978-79.

The year 1980 too proved to be a big year for her as she played the title role in J. Om. Prakash’s Aasha - Jeetendra, Rameshwari and Girish Karnad were her co-stars. Aasha become a blockbuster at the ticket counters while the song Sheesha Ho Ya Dil Ho Aakhir Toot Jata Hai created mayhem. Today, it is considered an iconic number – Lata Mangeshkar rendered it. Reena became the most in demand actress of her times along with Rekha, Zeenat Aman and Hema Malini. 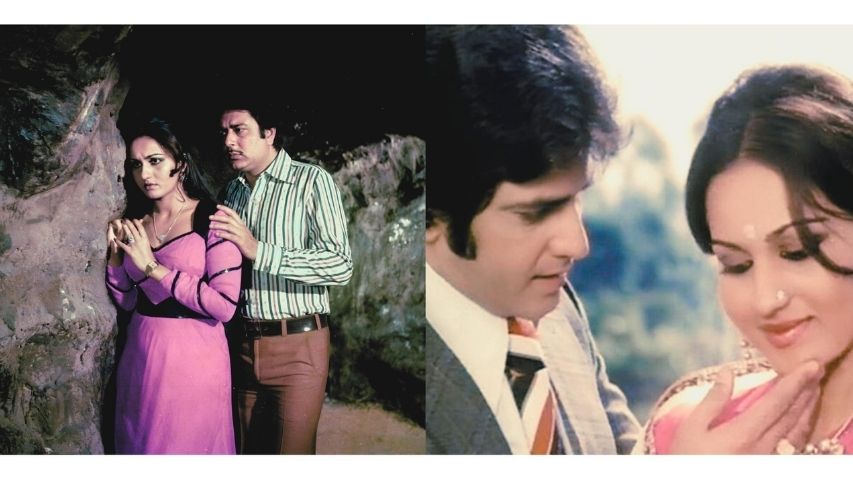 She delivered a sleeper hit with another woman-oriented film Sau Din Saas Ke (1980) opposite Raj Babbar - it became cult and was loved by most women as she played a rebellious daughter-in-law Durga. Her winning streak continued as she replaced Parveen Babi in Jwalamukhi (1980) and Naseeb (1981) due to the latters sudden disappearance.

There was no looking back at her zooming career as she delivered hit after hit with every passing year. 1981 saw her in a variety of different roles where she excelled like Naseeb, Ladies Tailor, Dhanwan, Pyasa Sawan and Rocky. 1982 again proved to be her year as she was seen in a knockout performance in her home production Sanam Teri Kasam, opposite Kamal Hassan. Sanam Teri Kasam had an outstanding musical score by Panchamda - the songs are still hummed. She continued working in her masala films, which were successful like Haathkadi and Badle Ki Aag. In the coming year her favourite director J. Om Prakash cast her in the successful Naukar Biwi Ka and another noteworthy film Arpan, once again opposite her favorite co-star Jeetendra.

Her marriage was not working and the offers of films never stopped, which is why she returned to films on advice of her mentor J.Om. Prakash. Aadmi Khilona Hai with Jeetendra, Govinda and Meenakshi Seshadri was the first. She continued to play character roles and was last seen in the year 2000 in films like Rajkumar and Refugee - post those she quit films completely.

She also appeared in a T.V. show Eena Meena Deeka with Asha Sachdev and Anita Raj produced by her sister Barkha Roy.

Reena Roy was one actress who made a successful heroine with almost all the top heroes. Besides her hit ‘jodi’ with Shatrughan Sinha - they did fourteen films together, her maximum film were with Jeetendra - almost sixteen. With the other heroes of the time too, she did many films - seven with Sunil Dutt with whom she was family friends and around four to five films with the heros Rajesh Khanna, Raj Babbar, Dharmendra, Vinod Khanna, Kamal Hassan etc., with the exception of Amitabh Bachchan whom she did only one Punjabi film Walayati Babu (1980).

Recently. Reena Roy was seen on a musical program as a chief guest and she seemed to be the same - charming, cheerful, fun-loving - the dimple cheeked actress whose sense of humor has not changed over time.