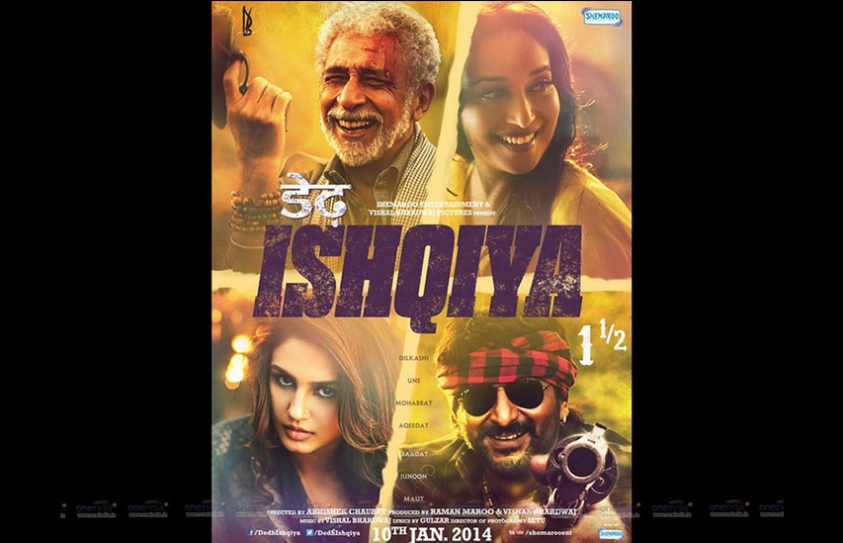 Tis the season of sequels and action flicks. Dedh Ishqiya, however, has the unique distinction of being better than its predecessor and without the embarrassment of exaggerated fight scenes.

The film begins with a few nods to its prequel when you hear the parrot joke (this time with the punchline) from Babban (Arshad Warsi) who finds himself in an open pit again, flanked above by Mushtaq (Salman Shahid) and his men. Here, the dynamics of their animosity are not explained, the given assumption being that one has already seen the 2010 release.

But fast forward now to the main storyline where Babban makes an unconvincing escape and is hot on Khalujaan’s (Naseeruddin Shah) trail after the latter made good his escape with a stolen necklace. Ever the eloquent lover, Khalu is putting his talents to the best possible use as he vies for the affections of the widowed Begum Para Mirzada Khan (Madhuri Dixit), whose husband, the Nawab, made her promise that she would only marry a poet after his death. Hence, a poetry competition was being held for the last three years in search for a wealthy suitor.

This sets the stage for lilting shayaris and conspiracy with two unsuspecting conmen caught in its midst.

Dedh Ishqiya certainly has a more elaborate premise with lush production values peculiar to the Vishal Bhardwaj banner. The Begum’s dilapidated haveli, among other locations, is lovingly lit up by the muted, warm glow of chandeliers and lamps. Each frame makes for a mesmerizing still.

However, what proves to be the film’s undoing is its meandering pace and a dash of contrived absurdity in its proceedings. For a comic thriller, the film’s humour largely has a graceless fall.

Sample this scene for instance: When Mushtaq is asked why he repeated lets Babban escape, he replies – “Agar joker marr jayega, toh sasuraa Batman kya karega?” You read it right.

The machinations leading to the climax are a bit of a drag and the final slo-mo shootout at the end (with a ghazal as background score) tests one’s patience.

There is also a brand advertisement for a phone that finds itself into a love scene. And if you’re looking close enough, you might even catch the undercurrents of Ismat Chugtai’s short story Lihaaf (1942).

The film holds together because of a good ensemble cast. Naseeruddin Shah and Arshad Warsi make as crackling a team as they did in the first film. Madhuri Dixit is a welcome addition to the cast as the Begum, mesmerizing in her charms and vulnerable with the burden of a secret. So is Huma Qureshi, who is playfully coquettish and sharp at the same time. Vijay Raaz does a fantastic job as Jaan Mohammad Khan.

Despite Dedh Ishqiya’s flaws, the film will be a delight to connoisseurs of couplets and of Urdu itself. The uninitiated audience might be grateful for the inclusion of English subtitles to better understand the subtext. It is because of this that the film has a select appeal, but might just draw you in with its quaint earthiness. But you will have to see for yourself to decide.