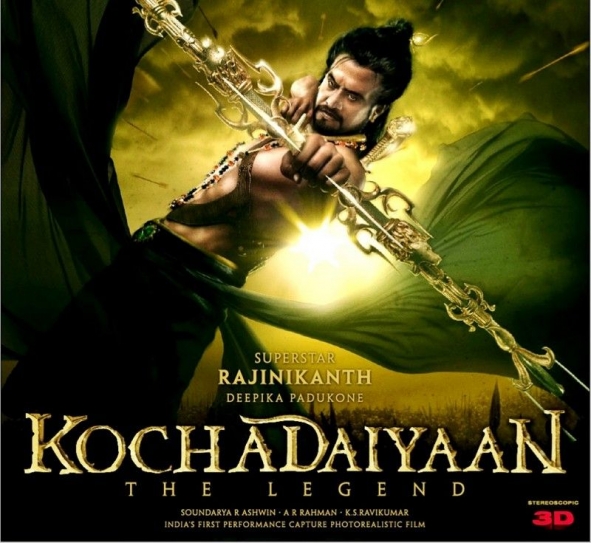 Kochadaiiyaan is an out-and-out Rajinikanth vehicle. The name is partly inspired from the ruler of the Pandyan dynasty and is also the other name of Lord Shiva. However, this is not an epic biopic, but a fictional retelling of a great warrior’s tale vis-à-vis motion-capture. Yes, as has been frequently emphasised in its publicity, Kochadaiiyaan is India’s first mo-cap film. The procedure is explained briefly at the beginning of the movie, where they demonstrate how reflective markers fixed on the leotard-clad actors track their movements. This makes the animation more fluid.

The film is about the son of the titular character, Rana (both parts played by Rajinikanth), becoming a famed warrior, who swears vengeance on the powerful men who wronged his father. He is caught in the battle lines drawn between the warring Kottaipatinam and Kalingapuri. Thus, Rana must emerge triumphant on the battlefield and in love.

And before you can say the name of the film, two song sequences appear in rapid succession, to establish a young Rana and then his valour in battle. There’s a twist in the tale before Princess Vadhana (Deepika Padukone) appears as love interest. But because this film is driven by Rajinikanth’s superstardom, it devotes the focus to his characters’ varied abilities.

There are low-angle shots of Rajinikanth walking towards the camera, armed with a sheathed sword and a dashing grin, sequences of him dancing and scenes where he wreaks raging havoc on the battlefield. It is a medium of fan service, happening at the backdrop of AR Rehman’s music, which does not leave a mark this time. There is an absence of a truly rousing battle score too. 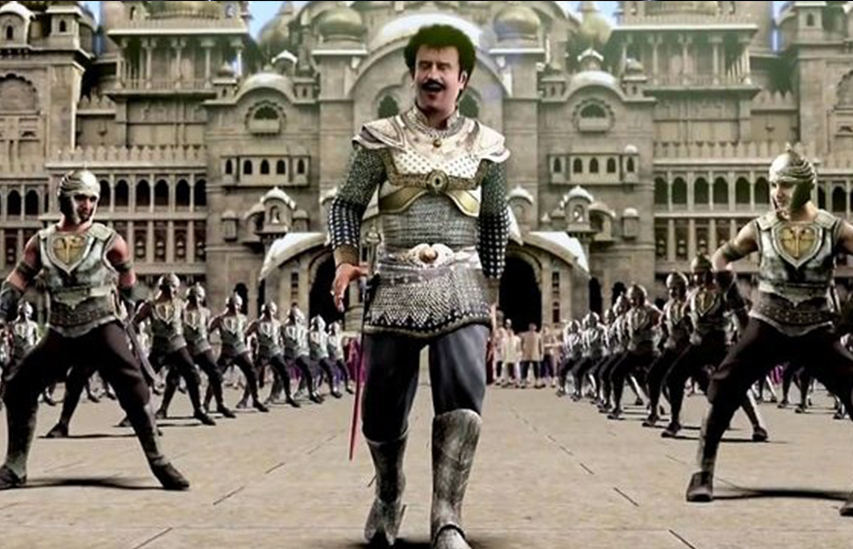 Kochadaiiyaan was touted to have been made at a fraction of Avatar’s cost, at 125 crores. And that shows. The facial expressions and the movements are rather stiff. There is a life-like ability that motion-capture imparts to characters, which is lacking here. The protagonists are disproportionate in size.

It is also strange when you see two key characters (played by Jackie Shroff and Nasser) who have not aged over the years, even as the much younger Rana blossoms from a child into an army commander on their watch. There is Deepika Padukone’s animated hair too, that swishes around at the slightest movement.

The film is dubbed in an astonishing number of languages. One cannot comment about other regional tongues, but the Hindi version does not lip-sync in tandem with the dialogue.

Speaking of dialogue, there is one particular scene where Kochadaiiyaan shares his wisdom with his troops. “There are many ways to defeat an enemy,” he says, sagely. “The first is forgiveness.” The very next instant everybody breaks into an abrupt song-and-dance, which leaves you wondering what the other ways are.

Rajinikanth is the only one who could have carried the film on his shoulders, because his star power pulls the film through. He seems restricted in the mo-cap medium and could have been an even more blazing presence in expressive, live action. Deepika Padukone, Nasser, Jackie Shroff and Shobhana have good roles, but the spotlight remains on the Thalaivar.

A sincere effort, Kochadaiiyaan is definitely going to be a must-watch for all Rajinikanth fans. To those who aren’t keen, sit back. This is for hard-core supporters only.