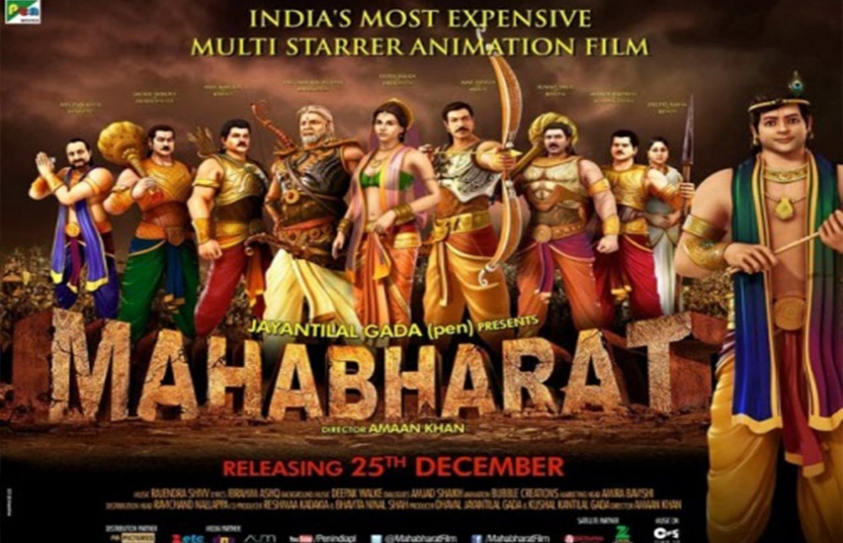 Ved Vyasa’s Mahabharat unfolds in an epic narrative of over 100,000 shlokas and has endured the test of time for thousands of years. Generations were raised on the enthralling tale of jealousy, intrigue and valiance. The yarn was source material to books, television shows and films.

Amaan Khan’s ambitious venture holds the distinction of being India’s most expensive animated film, while endeavouring to re-acquaint the younger generation with Indian culture. On this lofty note, the film opens in present day Mumbai with two poorly voice-acted boys squabbling over a coin when a wise eagle (Rohini Hattangadi) begins to recount the Sanskrit classic to them as a lesson in moral science.

You already know it is off to a shaky start when the lacklustre music does little to add to the story-telling. And then, you realise, there is little story to tell. In order to condense a vast legend into a palatable two-hour running time, what one ends up watching resignedly is a series of rushed, poorly edited sequences from the original chronicle.

Therefore, for those either familiar or uninitiated with Mahabharat, the film unsatisfactorily tracks the escalating rift between the Kauravas and the Pandavas which culminates in a final denouement in the battle at Kurukshetra.

What should inspire awe instead arouses grimace at the garish art work and poor character design. Why Draupadi most notably must wear attire of the same colour throughout the film is baffling. More so is Kunti’s changing hair colour even after she has aged.

But these are the nitty-gritties you would observe only if you paid more attention. However, it takes just a superficial glance to see the stiff, awkward movement of characters with unexpressive faces, even as the voice actors (a top-notch cast) try their best to infuse life into the proceedings. Krishna, in particular, looks disproportionate and does no justice physically to Shatrughan Sinha’s gruff tone.

Unfortunately, while the performances could have uplifted the ennui the film creates, the voices become inaudible or overpowered by the background score in many places.

There is a deliberate attempt to inject urban appeal by slipping in English lyrics in the initial songs, but that only hastens to scuttle an already sinking ship.

In their urgency to draw the film to a close, the makers have made two glaring exclusions which were a crucial part of yore and consequential to the events in the war.

The first was Abhimanyu’s last stand as he fought against the converging Kaurava army wielding a chariot wheel as a weapon. In the film, he is shown embracing Shakuni as he gets stabbed from behind.

The second exclusion was of the Brahmastra, the most fatal weapon in Kaurava’s arsenal. It is a detail that is skimmed over.

A lot of additional information about characters is inserted into the plot as hindsight, though that will only serve to confuse those unfamiliar with the epic. Despite the tremendous production costs, the younger generation would still stay away, already spoilt for choice with the Disney/Pixar offerings.

This is not to say that the country lacks the means to make a good animation film. All one needs are sound sensibilities in place. But until that happens, take the weekend off and gift your child an Amar Chitra Katha verion of Mahabharat. It is worth every penny.