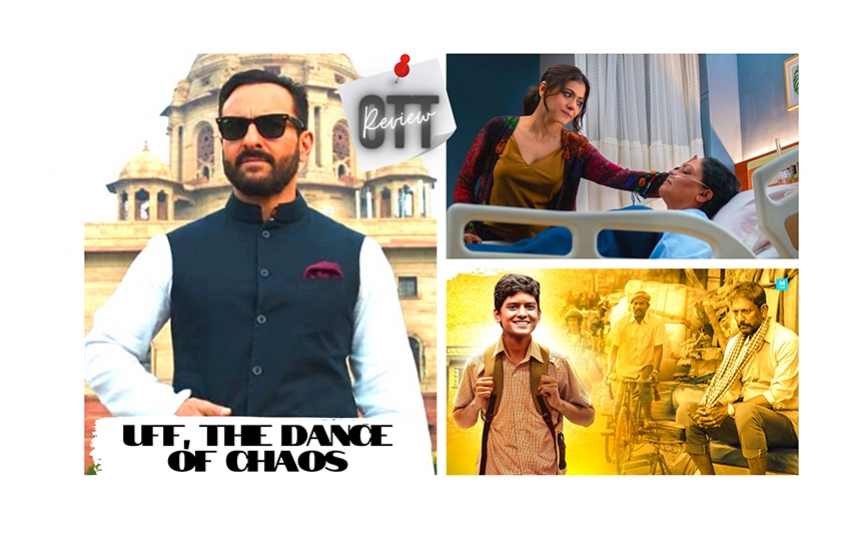 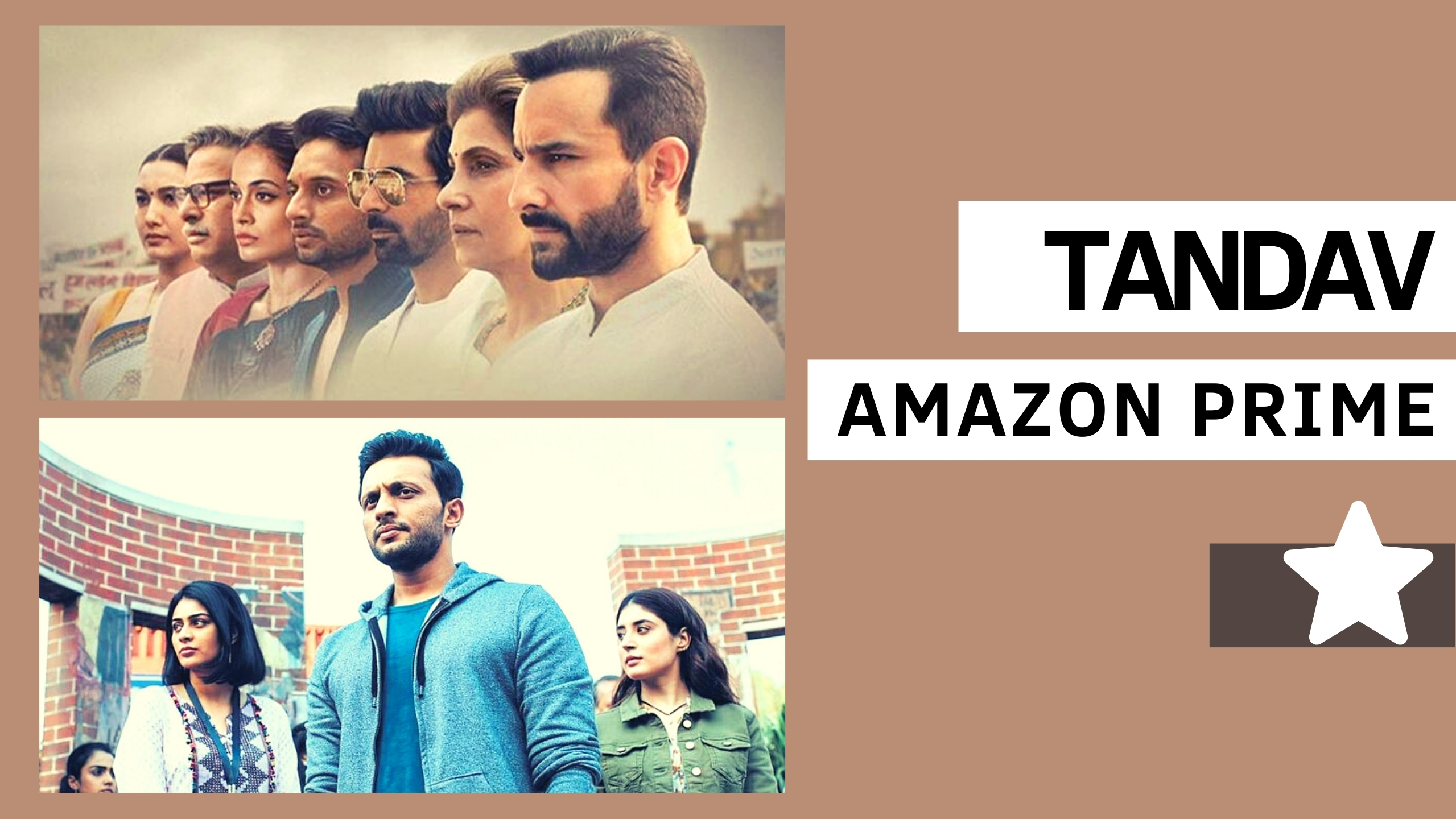 Tandav is a divine dance. It is also the title of a gaga saga of a web series – which dithers-‘-n’-withers while informing you that “political science is a study of politics”. Waah, how about telling us what we don’t know already? Oh dear, so much balking-‘n’-talking going on here that, in between the nine episodes, I had to run for cover out of sheer fear.

Viewing a series is a voluntary choice, though. Right? Snafu is in this case there isn’t an iota of cause to rejoice. Created and directed by Ali Abbas Zaffar (who’s snapped out such Salman Khan mega-hits as Ek Tha Tiger and Sultan), he dip-dip-dips as if the screenplay By Gaurav Solanki was a venomous tea-bag. Result: we’re introduced to more characters - all shades of crow black - than you can count on your fingers and toes. Such are our woes.

Truth be told, if I mainstreamed into this ‘Dance of Relentless Chaos’, it’s essentially because of the shiny-starry names recruited for the acting crew. Thought: did they hear out the script at all or resolve to flow with the get-go? Never mind, such conjectures really, here’s some sort of post-modernist ‘Yeh Teri Dilli Kitni Maili’.

Incidentally, no story if Tandav can be called that, is worth narrating when there isn’t a single character who evokes your empathy or concern. Worse, hey from whose point-of-view is this vile whale of a tale being told anyway? Again, jaane bhi do yaar, leave such cinematic niceties behind. A fandango of a fiasco, it is, for anyone who sees it from apna desh to San Francisco.

Hapless in synopsing the plot, I will just sharp-focus on six of the eminences who’re going through the most dreadful times of their young and advanced years alternately. Over then to:

Samar Pratap Singh (Saif Ali Khan): With the aplomb of a Shakespearean tragedy, he poisons his Prime Minister of a daddy-o (Tigmanshu Dhulia scowling). Why oh why? Simple: He and his Lady Macbethian wife (Sara Jane Dias placed on mute button) aspire to become the PM and his First Lady. Samarji, dressed ever so coolly, in Netaji’s outfits, frequently nurses a whisky tumbler, doles out rousing speeches, but only to discover that politics is no cream and peaches. Reason: he’s outwitted at every footfall he takes. Alas, his mansion is slithering with too many snakes. Hissss.

Anuradha Kishore (Dimple Kapadia): She has been the slain daddyo’s mistress since eons, who’s tired of just being a background sign of neon. By more crook than hook, she takes over as PM, even attending his funeral in a raw silk sari bordered by pachyderms. Symbolic that, like an elephant she possesses an unerasable memory. At the instigation of her tongue-in-chic aide (Gauahar Khan), she appoints a Cabinet of Ministers, leaving dear Samarji out in the brrrry cold. Terrible move that, the Raw Silk Lady lands up in hospital (as far as I can remember). And her frisky son, who seems like a model for outmoded Versace shirts, also reaches out for a whisky tumbler. Cheers?

Shiva Shekhar (Mohd. Zeeshan Ayyub): In a hubbling-bubbling-toil-‘n’-troubling subplot, he’s a radical student leader from a prestigious University (any resemblance to JNU and Kanhaiya Kumar are purely presumptuous). More obsessive of his gelled crown of hair, on occasion he rants, raves and goes Popeye when there are murders and suicides. Mr Shiva, not exactly a student’s age, is also depicted with some odd rockstar make-up on his face while holding a trishul, which has incited a news-making controversy. Problem-o is that you’re never quite sure whether this student leader is a dedicated leftist or an opportunist. Much ado is made, by the way, of being left or right.

Smoking Chimney (Sunil Grover): Eyes shielded by tinted Ray-Bans, puffing away at lite ciggies, here’s an exterminator extraordinaire. An ubiquitous maestro-mind, this Smokin’ Joe is so dangerous that you wish you never collide into him in a dark alley. This meanie-beanie is everywhere - at farmers’ rallies, on the vexed campus, political dharnas and at India Gate to confab with creepoid cops. Bop re bop.

Gopal Das Munshi (Kumud Mishra): Machiavelli reborn, he is presented as a tactician who also aspires to become PM. To his infinite credit, Mishraji turns out the only nuanced performance in the show. Oh.

Stud Muffin’ (Dino Morea): He’s an erudite political science prof, but is given to seducing women galore. And talking about women, there are so many upright femmes on the scene, that it’s impossible to decipher who on Planet Earth is doing what or why.

Alright apart from the sextet described above, the ever-bankable Anuup Soni fetches up in the sketchy part of a Dalit politico and the fine actor Sandhya Mridul bustles into the melee to announce that she’s pregnant. Uff, too many kahanis keep erupting in this hyper-fictive tract, which makes the political critiques of say, Vishal Bharadwaj seem like certified classics by comparison. Enough endured truly.

Last word: After sitting patiently through all the episodes, I wanted to break into a frantic disco dance myself - to the A.R. Rahman-composed song in the background. Much more relaxing. 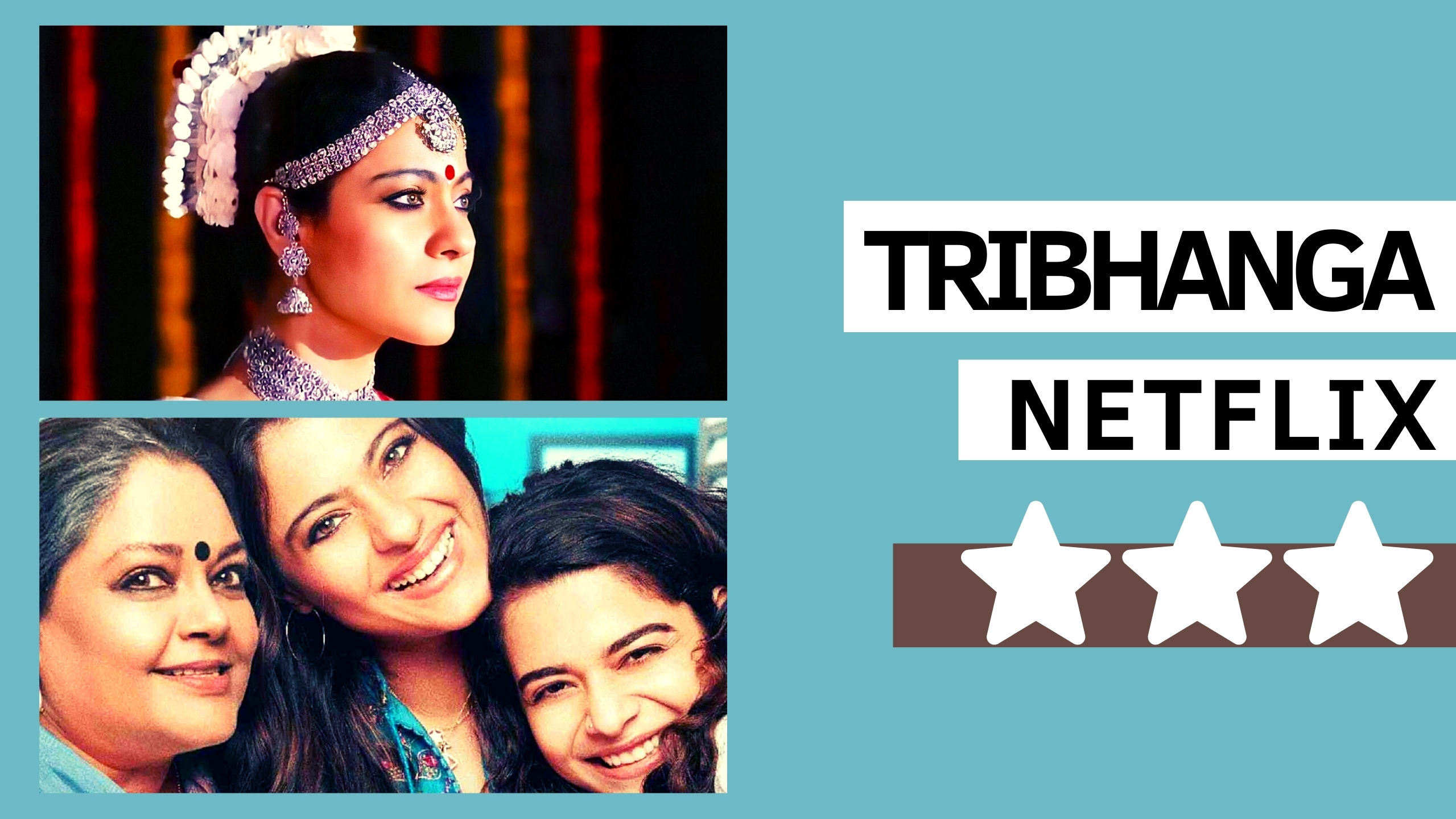 One more allusion to dance – this time to Odissi, signifying its complicated moves and postures. Not that you get to see an Odissi performance, only Kajol struts around for a while as Anuradha, a dancer-cum-filmstar. Interestingly she’s acted in a hit called Dil Something Something.

Next: Anuradha is about to take the stage, pent up with mild rage and then the show is cancelled. Her mother Nayantara, an award-winning literary novelist (Tanvi Azmi) has been rushed to hospital, and so commences a study of a dysfunctional family.

Daughter Anuradha, employing cuss words and a major attitude, is annoying at the outset – total ham on toast. However, as the dramaturgy unfolds, you understand that the actor has constructed a graph, to travel from the extremes of a grown-up brat who evolves into a woman of fortitude. Here, indeed, is a performance that’s as in-depth and mercurial as it can get. Applause please.

Actor Renuka Shahane makes an auspicious debut as director, then, with Tribhanga – supposedly with shards from her personal life. And though flawed and sketchy at times (the males for the most part, are wimps), it is still so plausible that we tend to identify with the family’s sulks, resentments and the ultimate assertion of that homily that a bloodline is thicker than water.

The third generation is represented by the film star’s daughter Masha (Mithila Parkar), who’s pragmatic and craves for a reconciliation between her mother and grandma, at the hospital under a coma, from which she may or may not revive.

Hovering around the three women are the novelist’s nosey, shuddh Hindi-spouting biographer (Kunaal Roy Kapoor, correctly bumbling and intimidated), the star’s official chauffer or is he a boyfriend? (Manav Gohil looking lost), a Lord Krishna devotee brother (played by a beatific grin). There are flashbacks too, to one Russian gadabout Dimitri (poor fellow, he even gets beaten  up). Ulp, not to forget a photographer who mouths dialogue like, “I’m irresistible?” Such a vain pain he is.

Actually, Mr Vain is the root of all the dissension. He’s Mother Nayantara’s second husband, who… gasp… had sexually molested her daughter. Did the usually perceptive writer have a clue about this immediately or did she not? Bit unclear. Anyway life had  gone asunder from that point. Question is: Can our still-enraged filmstar forgive and forget her mother for that irresistible jerk, a paedophile who should have been castrated or worse.

Mostly filmed indoors (particularly the hospital room), Shahane succeeds in helming a emotionally-dense chamber piece. The casting of the women is spot-on with the ever-nuanced Tanvi Azmi as the well-meaning mother, drowning herself in alcohol. Mithila Parkar, as the millennial girl, is impressive too.

Undeniably watchable and heart-rending, here’s a shout-out, do it again Ms Shahane. We need to be told stories, which so often perish behind closed doors. 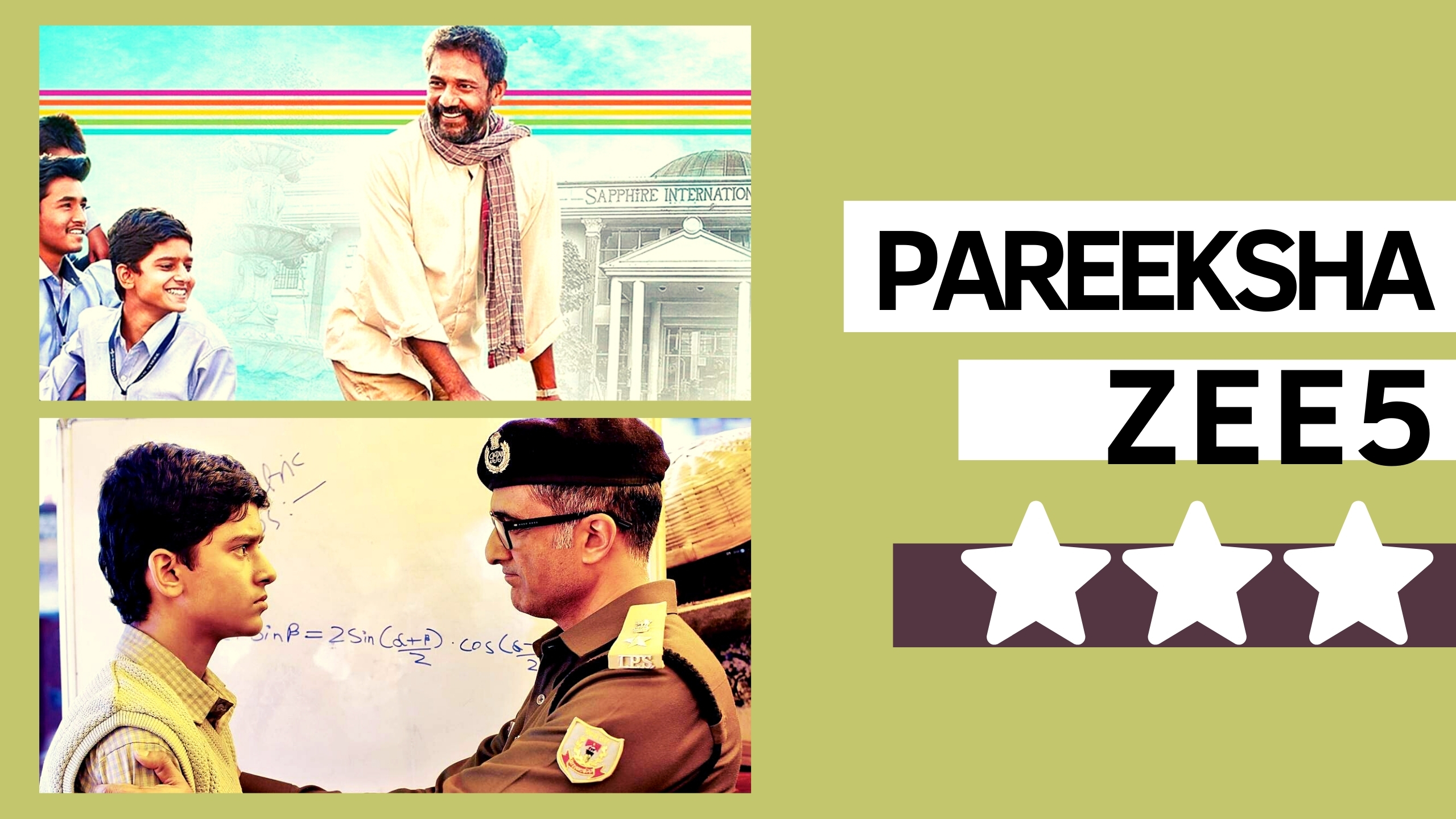 Sad, my bad. I caught up with Pareeksha, co-written and directed by Prakash Jha, only lately. Shaded with the humanism of The Bicycle Thieves and Do Bigha Zameen, here’s looking at the travails of a rickshaw driver in Ranchi, who has to resort to desperate measures – thieving, cheating, lying - to enrol his prodigy of a son in a beyond expensive school.

The smalltown atmosphere is authentically caught with its streetside kirtans, upcoming malls, the wealthy lording it up, in garden-fronted bungalows, and pawnshops for stolen goods. Now when the chips are down, a police officer to ensure that the prodigy receives his one chance to sit at the board exams and prove his mettle.

Eschewing melodrama, Jha keeps this story with a moral message, subdued and realistic. On the downside, the technical values are just about functional.

Be that as it may, the director extracts outstanding performances from Adil Hussain as the rickshaw driver, Shubham Jha as his son who won’t buckle under the educators’ pressures, and from Sanjay Suri as the police officer. The screenplay is, in fact, adapted from the real-life story of IPS officer Abhayanand who, against all odds, would coach underprivileged kids for the IIT examinations.

In sum, eminently worth streaming right away.