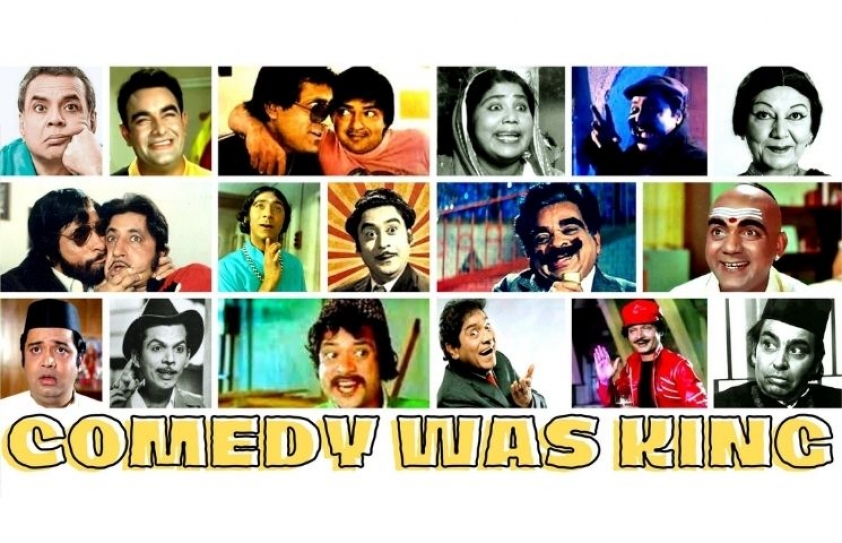 When Comedy was King

Film historian, Dhruv Somani, salutes the comic actors of yore, who would make us roll with laughter in the aisles.

Comedies have been largely catered to family audiences who turn up for mirthful entertainment. Frequently these laugh-a-minute rib ticklers tote roaring business at the ticket counters and even have a repeat value. Of course, the lead actors are the main crowd pullers but many times it has been the comedian who has had the audience laughing at his clowning act, thus becoming the real hero. In fact, there was a time when comedians like Johnny Walker and Mehmood were a mandatory part of a film’s success.

In the golden era of Bollywood, our comedians were made to look funny either by their outlandish attire or their lines of wisecracking dialogue. Most of them were made to look fat, short and ungainly (with make-up) to get viewers chortling. In some instances, obesity became their big ticket to stardom. Making overweight their assets, Gope, Ram Avtar, Moolchand, Tun Tun and Manorama are some of the examples that come immediately to mind.

In fact, a comedy duo Nazir Ahmed Ghory and Manohar Janardhan Dixit were extremely popular in the 1930s and ‘40s and were called the Indian Laurel and Hardy of Hindi cinema. Ghory had begun his career with Alladin and his Wonderful Lamp (1927) while Dixit had debuted with Starkling Youth (1931). They went on to form a comedy duo and were mostly seen in films made by the Ranjit Film Company.

It goes without saying that there was a major change over the years. The comedian who was on par with the leading cast became nothing but a prop. Meanwhile, top stars like Govinda and Chunky Pandey entered the arena with their comic antics, which somehow altered the category, not necessarily for the better, of the comedian. Here’s paying tribute, then, to some of the legendary comedians who made us roll with laughter in the aisles. 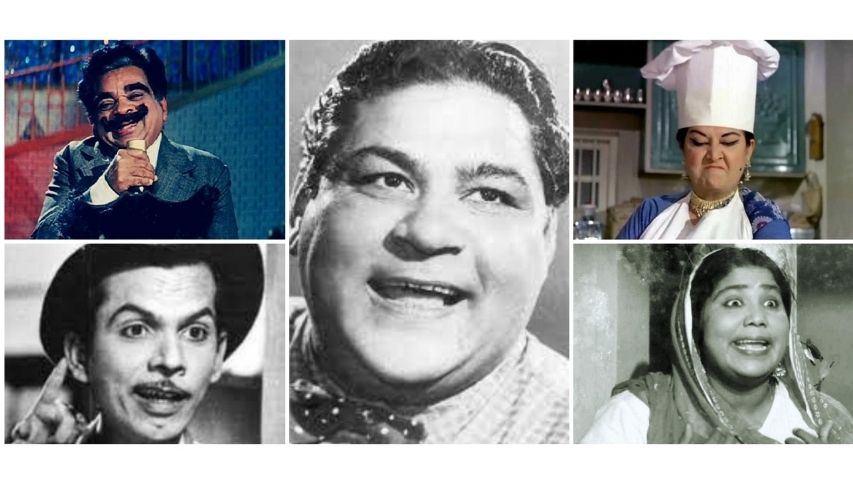 Gope was an actor who made his debut with Insaan Yaa Shaitan (1933) in a brief role. Followed over 120 popular films like Rajkumari (1938), Muskurahat (1943), Pyar Ki Jeet (1948), Nagina (1951) and Chori Chori (1956). Born Badruddin Jamaluddin Kazi, he featured in more than 300 films. He was spotted by none other than Balraj Sahni who recommended him for a small role in Hulchul (1950). Guru Dutt signed him for his upcoming film Baazi (1951) with Dev Anand immediately after being introduced to him by Sahni.

Indeed, it was Guru Dutt who named him Johnny Walker (after a brand of Scotch Whisky) after being impressed with his drunken act in Hulchul. Eventually, he would fetch up in every Guru Dutt film. Among many of his memorable films with various directors, there were Taxi Driver (1954), Naya Daur (1957), Madhumati (1958), Ek Phool Char Kaante (1960) and Shaan (1980). His last appearance was in Kamal Haasan’s Chachi 420 (1997). His performance as a masseur singing Sar Jo Tera Chakraiye from Pyaasa (1957) remains memorable.

Bhagwan Abhaja Palav, who was fond of wrestling, was popularly known as Bhagwan Dada. He made his debut in the silent era with Criminal (1938). He co-directed his first film Bahadur Kisan in 1938 after which he went on to direct many low budget stunt films. He often played a simpleton. In 1942 while shooting for a scene with Lalita Pawar, he accidentally slapped her so hard that it resulted in her facial paralysis and the burst of a vein on her left eye. After three years of treatment, she was left with a disabled left eye.

Bhagwan Dada also gained immense popularity as a hero in Albela (1951) and Jhamela (1953). His song Shola Jo Bhadke from Albela with his typical dance movement remains memorable. Unfortunately, he squandered his money at the racecourse and was cheated by those whom he trusted, leaving him in a financially strained condition during his final years.

Indrajeet Singh Johar better knowns as I.S Johar began his filmy career in the 50s with international films. He was classy and poked fun with a poker face with a self-satisfied smugness. He was seen in the company of Sonia Sahani in films like Johar Mehmood in Goa (1965), Johar in Kashmir (1966), Johar in Bombay (1967), and Johar Mehmood in Hong Kong (1971). His film Nasbandi (1978) was a spoof on the failed mission of population control by vasectomies during the period of the emergency. It was banned initially and released later. His other noteworthy films include Raaz and Anita (1967), Mera Naam Joker (1968), Johny Mera Naam (1970) in a triple role, Sahib Bahadur (1977) and Gopichand Jasoos (1982).

Mohammed Umar Mukri started his film career with his school friend Dilip Kumar in Pratima (1945). In a career spanning 50 years, he was seen in over 600 films. He was short in height and had a toothless smile. With perfect comic timing, he was adored by the audience. Some of his noteworthy films are Mother India (1957), Kohinoor (1960), Gopi (1970), Bombay to Goa (1972) Amar Akbar Anthony (1977) and Sharabi (1984). The qawwali with Rishi Kapoor and Neetu Singh from Amar Akbar Anthony, Tayabali Jaan Ka Dushman Hai Hai, is imperishable. So is the scene in Sharabi in which Amitabh Bachchan compliments him with the unforgettable dialogue, Mooche Ho Toh Nathulalji Jaisi Ho.

Tun Tun, the highly regarded singer Uma Devi got her screen name Tun Tun from Dilip Kumar who cajoled her to act on noticing her bubbly personality and comic timing. She went on to act in Aar Paar (1954), Mr & Mrs 55 (1955), Pyaasa (1957), Sadhu Aur Shaitan (1968) and many more. She remained a constant in most films made till about the late 1980s.

Manorama, Erin Issac Danials, was a child star. She shifted to character roles after her marriage to Rajan Haskar. She was plump and cute and would initiate laughter by just narrowing her eyes. Her memorable performances can be evidenced in Ek Phool Do Maali (1969), Caravan (1971), Bombay to Goa and Seeta Aur Geeta both in 1972, Naya Din Nayee Raat (1974) and Sahib Bahadur (1977). 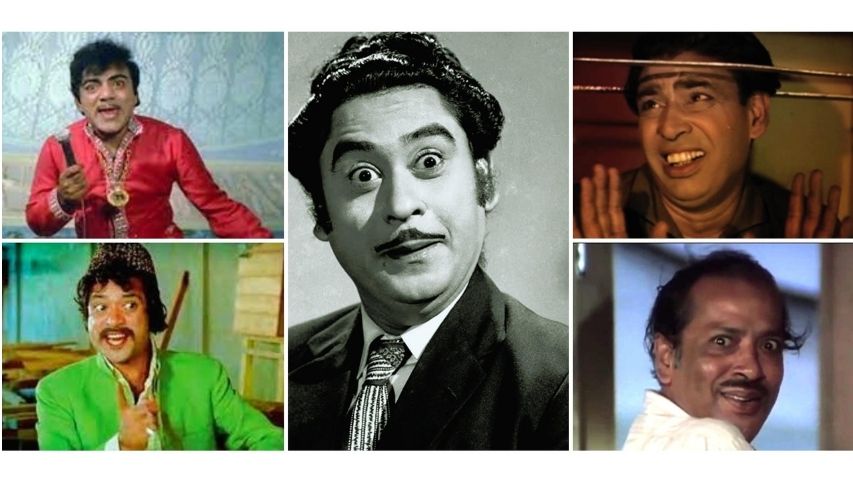 This decade belonged to Kishore Kumar, Mehmood, Keshto Mukherjee and Rajendernath. Among them, Mehmood became most popular as he excelled in mimicry, which came naturally to him.

Mehmood Ali, fondly remembered as Mehmood, was an actor, producer and director. He entertained audiences for over four decades doing more than 300 films. He was known to be a natural who would often improvise dialogues on the sets. He enjoyed being paired with Shubha Khote, Aruna Irani and Helen, and will always be fondly remembered for the hilarity he sparked in Padosan, Ankhen and Sadhu Aur Shaitan (1968), Bombay to Goa (1972), Do Phool (1973), Kunwara Baap (1974), Gumnaam (1965), Sadse Bada Rupaiyaa (1976) and Des Pardes (1978) to mention only a fistful.

Kishore Kumar was an incredibly versatile singer. Abhas Kumar Ganguly began his journey as an actor with Shikari (1946) in which his brother Ashok Kumar played the lead role. Although, he was blitzed with many acting offers, he tilted towards singing. Some of his noteworthy performances figure Aasha (1957), Dilli Ka Thug (1958), Jhumroo (1961), Half Ticket (1962) and Padosan (1968). His-home production along with his brothers Ashok and Anoop Kumar, Chalti Ka Naam Gaadi (1968), was a big hit and remains a favorite among his fans.

Rajendernath struggled for roles till Sashadhar Mukherjee chose him as a comedian for Dil Deke Dekho, which established his career. He became a permanent fixture in every Nasir Hussain film. Some of the other films in which he scored with his flair for knockabout comedy were An Evening in Paris (1967), Teen Bahuraniyan (1968), Purab Aur Paschim (1970), The Train and Prem Rog (1982). 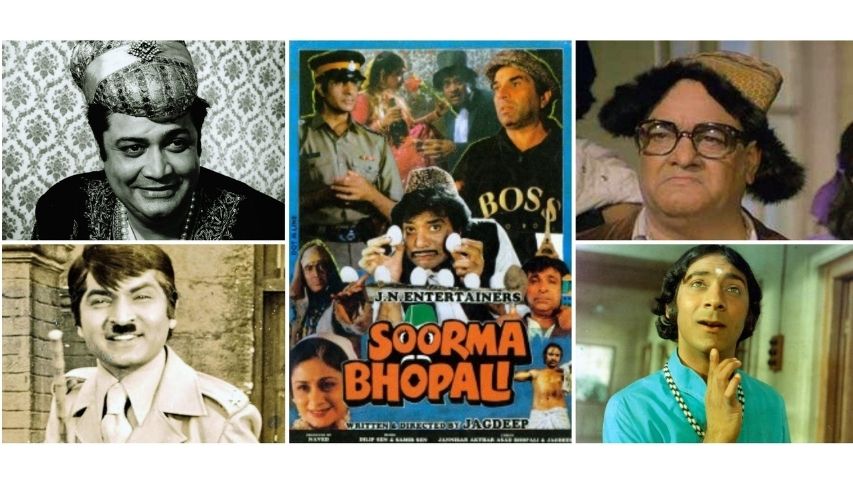 In this decade of multi-starrers there was hardly any scope for the comedian. Now they didn’t have a separate track but became an integral component of the plot as supporting characters. Count among them Asrani, Paintal, Deven Verma and Jagdeep.

Govardhan Asrani was a graduate of the Film and Television Institute of India, Pune and worked as a supporting actor in Satyakam (1969). His journey as a comedian began with Bawarchi (1972) after which he frequently appeared in the films with Rajesh Khanna since they were close friends. His most memorable role continues to be of the jailor of Sholay (1975) and of Amitabh Bachchan’s secretary earlier in Abhimaan (1973).

Paintal made his debut in Umang (1970) and was seen in numerous films like Bawarchi, Jungle Mein Mangal and Parichay (1972), Heera Panna and Manoranjan (1974) and Rafoo Chakkar (1975). One of his most remarkable characters was that of Champak Bhoomia from Aaj Ki Taza Khabar (1975).

Sayed Ishtiaq Ahmed better known as Jagdeep appeared in more than 400 films. He began his career as a child artiste and went on to make his own identity as a supporting actor-cum-comedian. He was seen in many crowd-pleasing films like Pardey Ke Peechhey (1971), Naagin (1976), Jaani Dushman (1979), Phir Wahi Raat (1980) and Saamri 3D (1985) and Soorma Bhopali (1988). His two most memorable characters were seen in Sholay (1975) as Soorma Bhoopali and Purana Mandir (1984) in which he portrayed Daku Machhar Singh with a full fledge parody of Sholay (1975) - it left the audiences in splits. 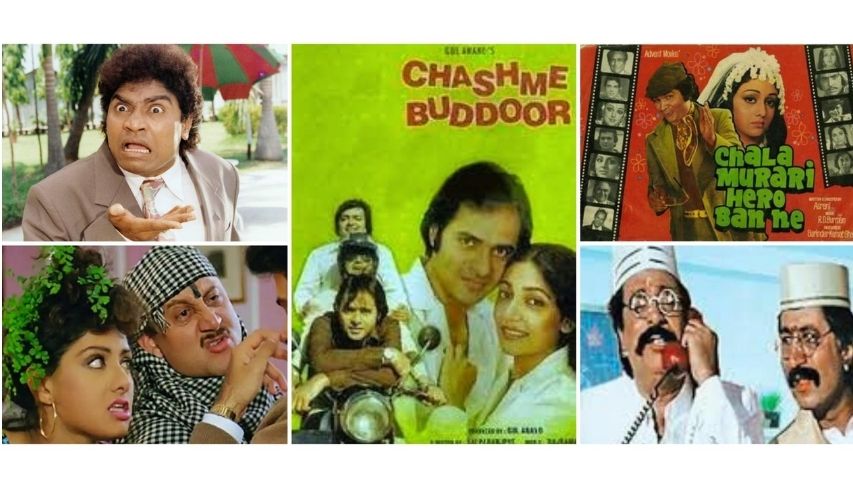 By now, most A-list actors had drifted towards comedy, namely Sanjeev Kumar, Amol Palekar, Dharmendra, Rekha and Amjad Khan. Films directed by Dada Kondke with his earthy dialogues had managed to woo the audiences. Shakti Kapoor and Kadar Khan evoked instant laughter with their tomfoolery in many films including Himmatwala, Mawaali, and Justice Chaudhary all in 1983, Pataal Bhairavi (1985), Baap Numbari Beta Dus Numbari (1990).

T.V. stars began to be absorbed into the movies like Rakesh Bedi and Ravi Baswani, Rajesh Puri and Satish Shah. Even the usually serious Anupam Kher made waves as a comic actor. Times were changing fast although retro stars like Jagdeep, Asrani and Deven Varma still dominated the scene. Viewers preferred to watch action films while comedies began failing at the ticket counters.

Johnny Lever was upcoming and the only comedian who went on to be a must ingredient in the movies with hilarious performances, especially with Baazigar (1993) and Judaai (1997), two of my personal favorites. 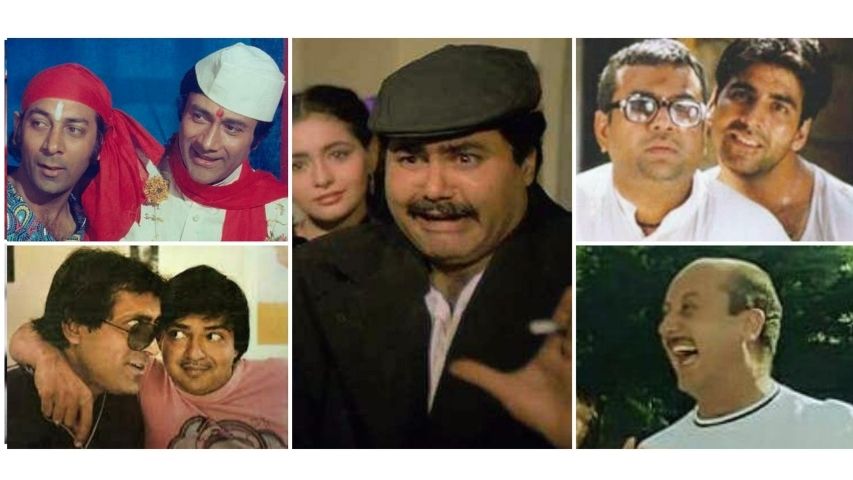 Today, comedians are extinct. Mainstream actors have taken over as laugh-raisers since they are the ones who carry the film on their shoulders. Actors like Javed Jaffari, Ayushmann Khurrana, Rajkumar Rao, Kartik Aaryan, and Riteish Deshmukh are all known for their flair for the funny stuff. Yet, Sanjay Mishra, Pankaj Tripathi, Divyendu Sharma and the consistently dependable comedy king Paresh Rawal, can be rated as the torchbearers of this genre.