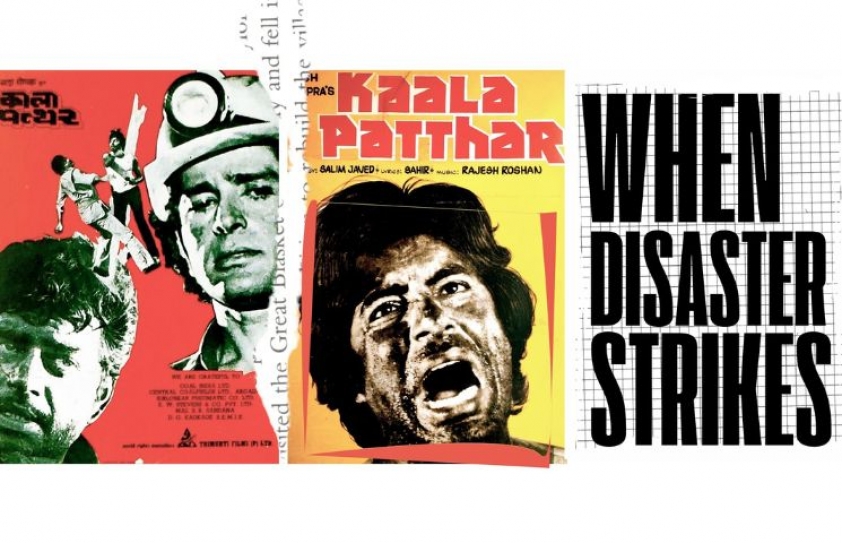 Movies about doomsday predictions have always clicked. Hollywood has frequently belted out disaster-themed blockbusters. Monster films were also in a way disaster films: gigantic creatures like Godzilla and King Kong were out to destroy the world. Man-made monsters like Frankenstein and Dracula and their remakes and sequels topped the box office charts.

Plus there have been films on natural disasters, which kept the viewers at the edge of their seats like The Poseidon Adventure, The Towering Inferno, The Airport series, Earthquake, San Andreas, Meteor, The Day After Tomorrow, 2012, Deep Impact, Geostorm, Poseidon, Volcano, Twister, Tsunami, Dante’s Peak and the biggest of them all, Titanic.

At one point, Bollywood too was inspired by dramatic disaster films, notably B.R. Chopra’s The Burning Train (1980) and a year before that, his younger brother Yash Chopra’s Kaala Patthar (1979), which became India’s first film on disaster culled from a true-life incident.

Leaking water has built up into a raging torrent, which rips, tears and flattens a mine wall, flinging a huge chunk of coal at a man standing there. With a wrinkle traced on a ragged printout, Yash Chopra had explained what he wanted for the scene to cinematographer Kay Gee, and his art director Sudhendu Roy. “I want the man to remain standing. This is the only underwater shot in the film so make sure you get it right,” the director had stated.

Yash Chopra was known to make films like Ittefaq (1969), Daag (1973), Deewaar (1975), Kabhi Kabhie (1976) and Trishul (1978), dealing with suspense, emotions or romance. Kaala Patthar was his first film dealing with human reactions to a calamity. It was during the shooting of Trishul in Delhi that the unit’s conversation had turned towards an incident of a mining tragedy circa 1974, in which 375 miners had lost their lives. 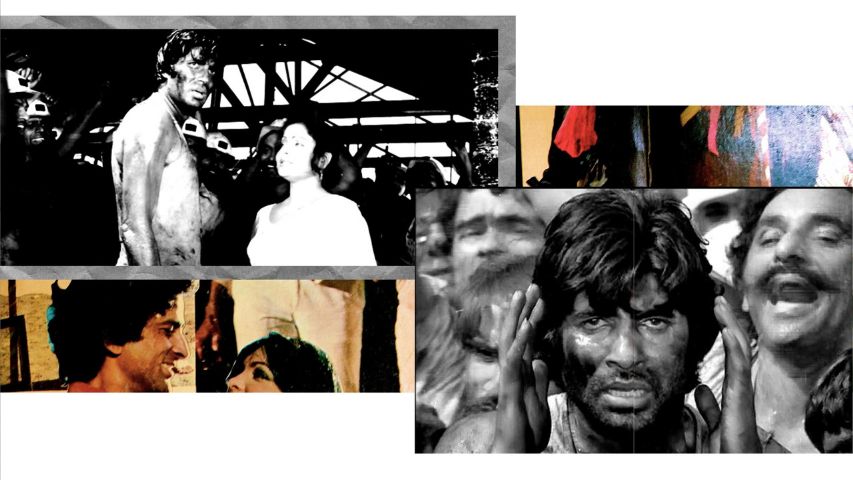 The Trishul team, especially Amitabh Bachchan, was excited with the idea of making the first disaster film of India. Once back in Bombay, the writers went off to Poona and stayed at The Blue Diamond Hotel, and after three weeks of uninterrupted work came back to Bombay with the script of Kaala Patthar. The underlying story idea seemed to have been inspired by the classic novel Lord Jim by the British author Joseph Conrad.

The shooting began with all the stars there at location for the picturisation of a song. Even Shatrughan Sinha who was known to never show up before noon was punctual. All the territories of the film were sold at the outset while Yash Chopra frantically began to scout for the key location - a coalmine where most of the scenes would be filmed. He visited six different mines in different parts of the country before he settled for the one in Gidi (situated at an hour’s drive from Ranchi).

However, he had to abandon the idea since there was lack of ventilation and basic amenities, besides the unruly crowds of Bihar. Maddening crowds had gathered there when he was shooting with Shatrughan Sinha. The police had to fire into the air to control those who had descended there to see their Bihari Babu.

Eventually, sets were constructed at Raj Kapoor’s Loni farm, near Poona. No special effects were used and the bulk of the shoot was completed there. Trouble started though when the unit had to shoot underground on the sets of Film City. The flood scenes were shot with Hollywood technicians. In one of the scenes Shashi Kapoor had to wade through a column of water when a ceiling of the tunnel came crumbling down. The actor skidded and slipped underwater with no signs of coming up. It was Romesh Sharma, who, with him in the scene, who quickly removed the debris and rescued him. Shashi Kapoor had injured his leg and was bed-ridden for a week. 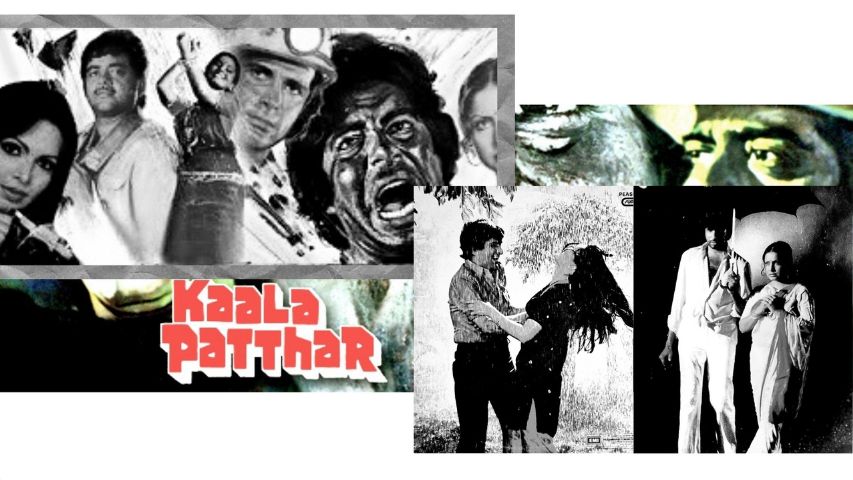 In another crucial climax scene, which was to be shot with Shatrughan Sinha, it was planned he would be flung across the mine by the force of water, which was kept high - like a jet of water that hits the turbine blades in a hydroelectric plant. Though the director and the technicians had mentally prepared the star for the critical scene when the water hit him, he disappeared from the camera’s lens. Once the water pressure was lowered, the crew saw him standing at attention, soaked but smiling, saying never again.

Yash Chopra was stressed as Amitabh Bachchan was to perform a similar scene with water jets flinging him too across the mine. Even after eight days of preparing him, a similar situation arose. Bachchan was not to be seen at the first go. Hesitantly they asked him to re-do the scene to which he agreed immediately but with a suggestion that it would be safer if after hitting the wall, he started struggling back against the water. Another downer for the unit was that there was always a chance of infection from the water. But Yash Chopra was happy as he found that his actors were willing to take death-defying risks.

Salim and Javed were pleased with the outcome as the cinematographer had managed to capture the right atmosphere for the mines as well as the village. Each actor had a well-defined character to play. Amitabh Bachchan played Vijay Pal Singh, a mine worker whose silence speaks louder than words as he is a disgraced Merchant Navy captain suffering from a guilt like the character of Lord Jim in Conrad’s novel.

Shashi Kapoor enacted Ravi Malhotra, an engineer, who is infuriated because his attempts to warn the mine’s owners of the danger there are in vain. Shatrughan Sinha was Mangal Singh, an escaped convict who becomes a coolie and he also helps the villagers. 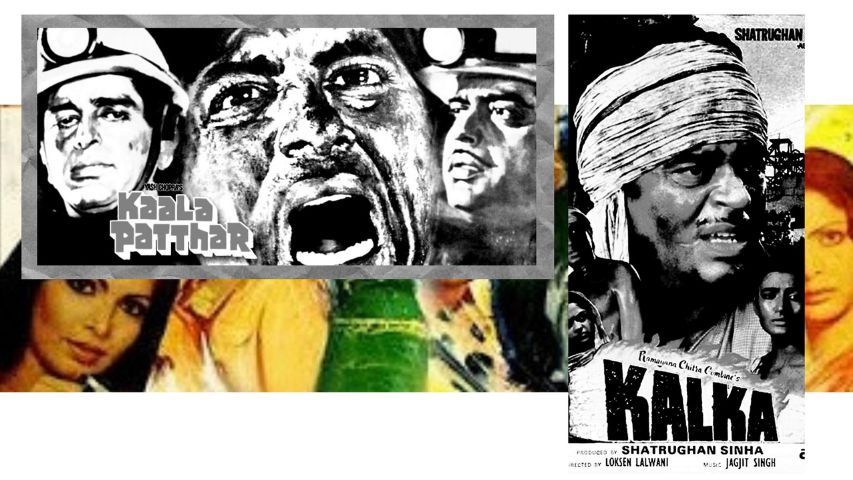 Raakhee Gulzar played the role of Sudha, a doctor always on the alert to help the injured villagers. Parveen Babi was Anita, a newspaper journalist determined to expose the plight of the miners. Neetu Singh was the vivacious bangle-seller, Channo, trying to spread cheer in the drab lives of the village women. Parikshit Sahni portrayed Jagga, a Sardar truck driver who also runs a dhabba. The villain of the piece was Prem Chopra playing Dhanraj, who has been exploiting the miners, without caring about their safety.

While the love angle between Shashi Kapoor and Parveen Babi was normal, all other relationships were shown as complicated. Raakhee sympathizes and eventually begins to love a bitter and angry Amitabh. Neetu loves Shatrughan although she knows that he is a doomed man. Poonam Dhillon was signed for a very brief role which she regretted doing later.

The music of Kaala Patthar was composed by Rajesh Roshan. Though some of the songs like Ek Raasta Hai Zindagi, Baahon Mein Teri Masti Ke Gehre and Dhoom Mache Dhoom did well,  the overall music score failed to reach the top of the charts like the other films from the Yash Chopra banner. The  excellent background score was by Salil Chowdhary.

Kaala Patthar was a much-anticipated film, which had an above average run at the ticket counters but was not a big hit, perhaps because of high expectations from the audience. Released 43 years ago, it was a technically well-made film and went on to achieve a cult status.

Incidentally, under his own production banner, Shatrughan Sinha made another more realistic film starring himself in the lead about the Dhanbad Coal Mining disaster of 1965, Kalka (1983), directed by Loksen Lalwani. The outbreak of fire had led to the death of 268 miners. Kalka co-starred Raj Babbar, Rameshwari, Sarika, Amjad Khan and Arun Govil. Lauded by the critics, it is accessible on YouTube. By comparison to Kaala Patthar, it was made on a relatively small-budget. The film exposes the inhuman conditions, which miners are subjected to. Indeed, it is also worth a dekko.