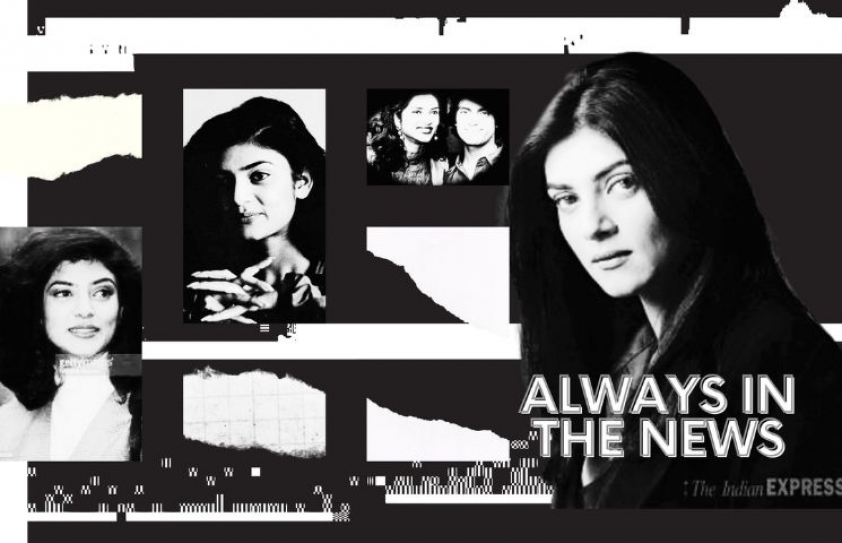 Humra  Quraishi harks back to 1994, the year in which Sushmita Sen was crowned Miss Universe. She revisits an interview with her boyfriend Rajat Tara and a column written by her on the beauty queen’s visit to New Delhi.

With  Sushmita  Sen  once again in the news, I just dug out these two, my  earlier writte pieces on her and on her steady friend at the time, circa 1994, New Delhi based Rajat Tara. After the interview in May 1994, a few months later, I had tried to meet Sushmita as well, but  I wasn’t too successful. Both these pieces were published in a national daily, in the months of May and September.

It’s just not fair. There, Miss Universe, Sushmita Sen, is starting to globe trot, with about 35 countries on her destination list, and here her friend Rajat Tara, is slogging. Yes, he’s been giving his MBA examinations. “If it hadn’t been for these stupid examinations I would have definitely gone to Manila with her,“ said he in an exclusive interview.

It was an impossible task to get through to him, the clue was that his father worked as a Public Relations Officer at an embassy. Tracking down Rajat’s father was the tough part but when I spoke to him he was friendly. I started the usual, how did Sushmita meet your son and has their relationship changed, to which he replied, “Look why don’t you ask Rajat all this. Right now he has gone to give his (examination) paper but will be  back soon. Talk to him at home.”

And again talking to Rajat wasn’t difficult except that he didn’t encourage me to go over to his home at Delhi’s Mandakini Apartments, “Why take the trouble? Ask me whatever you have to over the phone.“

He was a  simple 24 year old boy but cautious and to the point. Here goes my interview with him: 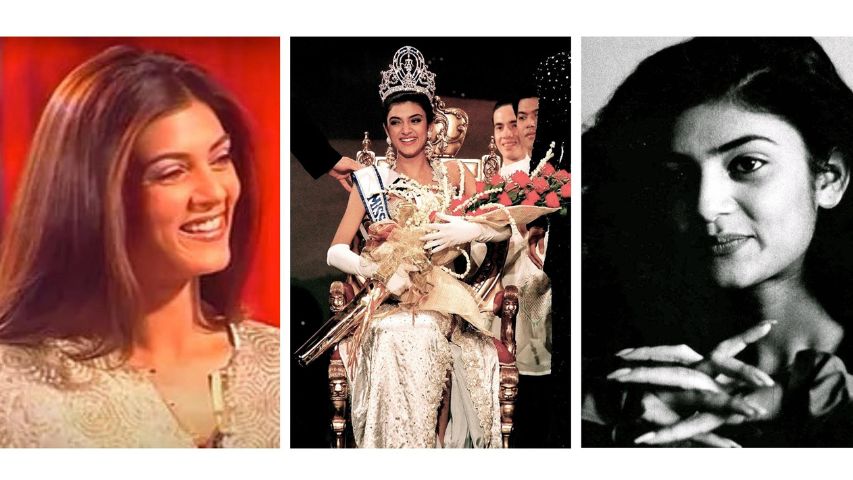 How long have you been dating Sushmita?

Where did you first meet her?

At the Air Force Golden Jubilee celebrations. There was this fashion show where both of us took part .

After her becoming Miss India and now Miss Universe, has there been any difference in your relationship with her?

No none at all.  Why should any difference come about!

You haven’t felt even a little bit insecure?

Not at all. I’m not really  bothered. We are very good friends. She has been calling me up daily. She calls up or then I call her.

How long do you two talk?

For about five minutes or so.

Do you plan to marry her?

Marriage is a long way off. We still have a lot to do in life. So no marriage for at least three or four years.

Did she ask you to come along with her to Manila, when she was going for the Miss Universe contest?

Yes, of course, she asked me. But  I had to take these stupid examinations.

Do you feel her parents would have been fine with you going with her?

Yes, her mother is  friendly. Father, yes, is a bit reserved.

It  is  being  said that  to all the  queries about you, her father answers with a I–do-not-know attitude. Comment.

Yes, I told you he is a reserved sort. Fathers are like that only! Or, I suppose that is the normal human attitude. Her  mother is open and  friendly .

Your examinations get over on May  31. Would you  be  joining her after that?

No, for then she will be busy traveling. She ‘ll be the property of MUI (Miss Universe International) and be going to different parts of the world for charity shows, fundraising programs. How can I afford to go along? 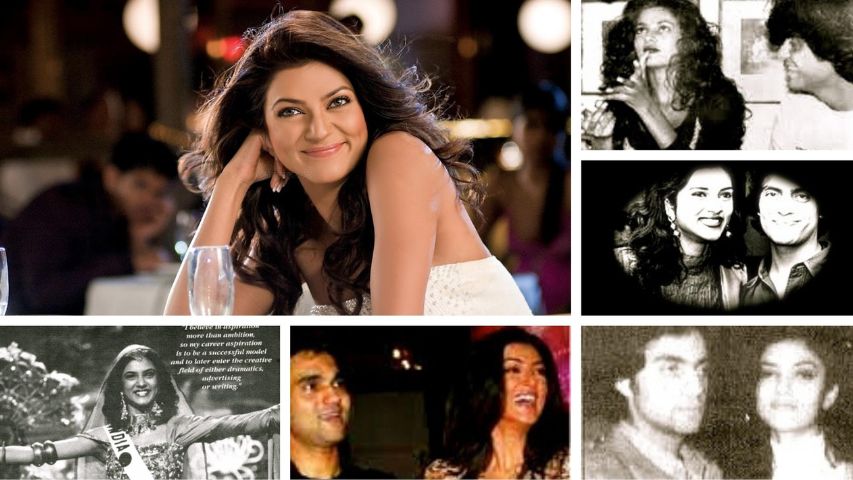 Okay, coming to what attracted you to Sushmita when you first met her?

She is great company.

What about her looks?

Yes, looks are important but not just looks. I really enjoy her company, in fact, now what upsets me is that I‘ll not be seeing her for sometime. She‘ll only come back after a month and then will be out again for 10 months.

Rajat you aren’t feeling a bit insecure, uneasy that here goes your special friend as Miss Universe, whilst you sit here with your books?

No , not at all insecure. I have  never felt that way.

Were you confident that she would become Miss Universe?

Yes, I was. In fact, she was so confident in herself.

If your relationship continues, do you think that because of her being Miss Universe could bring problems, cracks in the relationship?

There can be no fun without problems.

But too many problems can crack up even the best friendships?

Yes,  but relationships crack up even without  problems.

Is Sushmita the type of person who would do things her own way?

Yes, she has her own mind. She is today’s woman.

Has she thought of a film career?

Have you been the only male friend in her life?

I believe I’m the only one.

With all this happening, she being crowned Miss India and now Miss Universe, has it affected your studies?

To the extent I’m finding it difficult to concentrate. Even this interview has disturbed my studies! 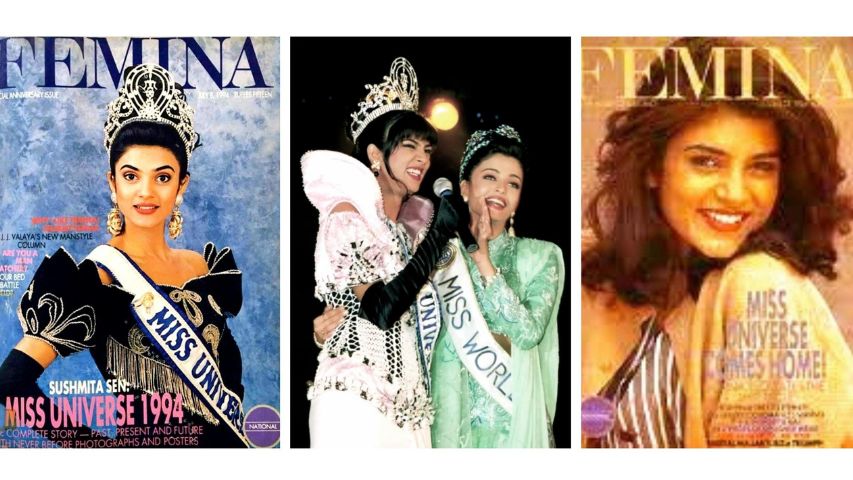 And then, post this interview, followed another piece I’d written then and which was titled Lesser Known Details Of Sushmita’s Trip.

It would definitely be stupid of me to now tell you details about Sushmita Sen’s homecoming. Yes, it’ll be outdated because you will have by now  read how she has floored just about everybody, even hard core journalists, by her  charm, wit and intelligence.

Yes, she knows how to handle the Press, how and when to smile, how to giggle, and even when to throw back her thick crop of hair. She has ‘graduated’. But then, she no longer looks like ‘the girl next door’. She has acquired a mature look; maybe to match the mature questions that she  took to answering with ease, whether they were on economic  liberalization in India, on abortions or whether on the state if women and so no.

So here are some lesser known details of her 3 days visit to New Delhi.  First and foremost,  she set to rest all rumours that her bagging the Miss Universe title didn’t bring in a casualty, in the form of leaving or dumping her steady friend, Rajat Tara. No way. For Rajat Tara was throughout with her at the press conference and her outings. And he looked confident that he‘s still the man in her life. Here I thought that I’ll have a detailed interview with him on ‘kya kya hua’ on Wednesday, after Sushmita leaves for Bombay, but I was outsmarted. Rajat has also flown to Bombay with her and her parents.

The maid Shobha, employed in her parents home in the Vasant Kunj locality of South Delhi, couldn’t provide much information about Sushmita‘s three days stay in the capital, for not only was she staying at the Taj Palace Hotel and the maid had been briefed, obviously, not to open her mouth. However, some reliable sources who did speak gave details about her stay at the Taj Palace. She stayed in the Presidential Suite. There are two Presidential suites in the hotel, one  done up in the Victorian style and the other done up in the royal Rajasthani ethnic décor. Sushmita’s choice was, of course, the Rajasthani one. In this four room suite she and her parents and her brother stayed, with Rajat Tara spending most of his time also there.“ At night he didn’t stay back, Sid, another friend of Sushmita’s,  confirmed. The rest of her entourage, which consisted of 15 people, stayed on the deluxe floor of this hotel.

Although the Presidential Suite costs about 15,000 rupees a day, the hotel didn’t charge her for that. Sushmita remained on a hectic schedule here, remaining out most of the day, but whenever she ordered food in the hotel, her favourite items were alu parathas, chicken brochette, fruit salad, milkshakes and ice cream. No, she didn’t order any hard drinks.

Let me also add that while she charmed Delhi, her idea of going along Shantipath in a horse drawn carriage, didn’t really appeal to many of her fans. Besides the fact that it blocked the traffic, it appeared unsophisticated, more like a  childish gimmick.