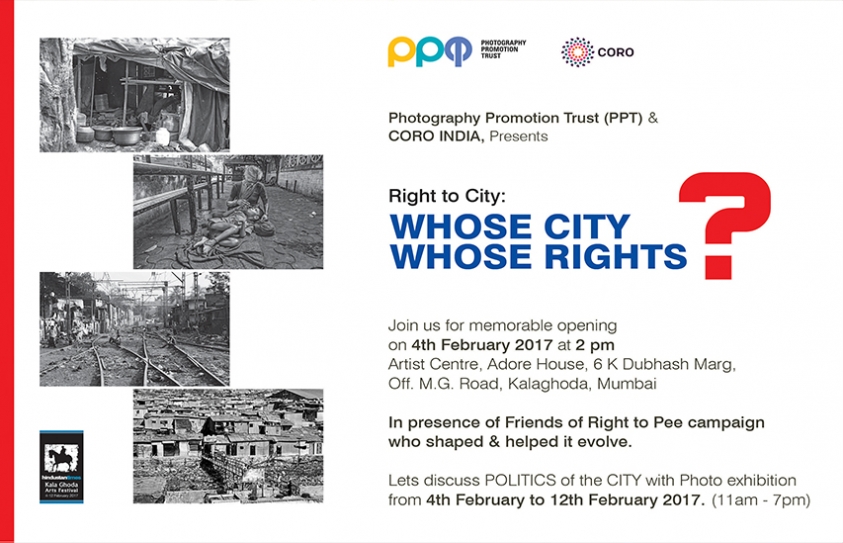 Together, CORO and PPT hope to tackle the crucial issue of the exclusion of marginalized populations in India. The emphasis of this project is to highlight the value of diversity, through bringing to the forefront populations of the urban poor often left behind by economic growth, in spite of them holding the burden of this growth upon their shoulders.

Photography of Padma Shree Sudharak Olwe, the founder of PPT is a journey into the unseen perspective of the human condition. CORO India has been intensively and extensively working at the grassroots for the last 27 years. CORO initiated Right To Pee (RTP) campaign for gender and space rights in Mumbai has been logically expanded to ‘Right to City’ framework.

PPT and CORO together are aiming at unfolding the dimensions to the ‘Right to City’ movement through photographic exhibition and are unpacking the realities of urban poverty. These are the populations who toil tirelessly behind the veneer of the burgeoning polished urban landscape we call home. Our shining glass edifices were constructed by them, and it was them who were forced to relocate when these skyscrapers are to replace the modest slums that they dwell within. ‘Right to City’ aims to inspire and mobilize the idea that the value of urban growth does not supercede the rights of those marginalized by it. It is the promotion of an equitable reevaluation of how our cities are built and developed, imploring all of us to reclaim the right that we collectively have a say in the development of our surroundings.

The world charter defines RTC as, ‘The equitable construction of cities within the principles of sustainability, democracy, equity and social justice. It is the collective rights of the inhabitants of cities with the objective to achieve full exercise of the right to free self-determination and an adequate standard of living’. The exhibition acts as a catalyst to feed our imaginations with visions of a more just city-scape, eventually aiming to let our imaginations overflow and mold reality around this idea. RTC will also feature a panel discussion on the 11th February 2017 between 11.30 – 1.15 pm @ Artist centre Adore House, 6 K Dubhash Marg, Off M. G. Road, Kalaghoda Mumbai 400001.

The panel will feature a synergistic ensemble of thought leaders featured below: Amita Bhide: Professor and Chairperson of the Centre of Urban Planning, Policy and Governance in the School of Habitat Studies, Tata Institute of Social Sciences Mahendra Rokade: Program Director of CORO India, a grassroots led NGO

Mumtaz Shaikh: Leader of ‘Mahila Mandal Federation’ a grassroots based women’s organisation. Mumtaz figured in BBC’s list of 100 most influential women in the world in 2015 for her work on violence against women and on the ‘Right to Pee’ the campaign for safe, clean, free urinals for women in public spaces.

Before commencement of the panel discussion, 10 minutes will be spent in going through the photo exhibition Each of the panelists in the initial round in approximately 10 minutes will speak on her/ his thoughts, interpretations and observations around ‘right to city’. After the first round some time will be dedicated to explanation/ clarifications/ elaborations if and any required by/from any panelists on the presentations. The panel will then be opened for questions/ sharing from the audience. 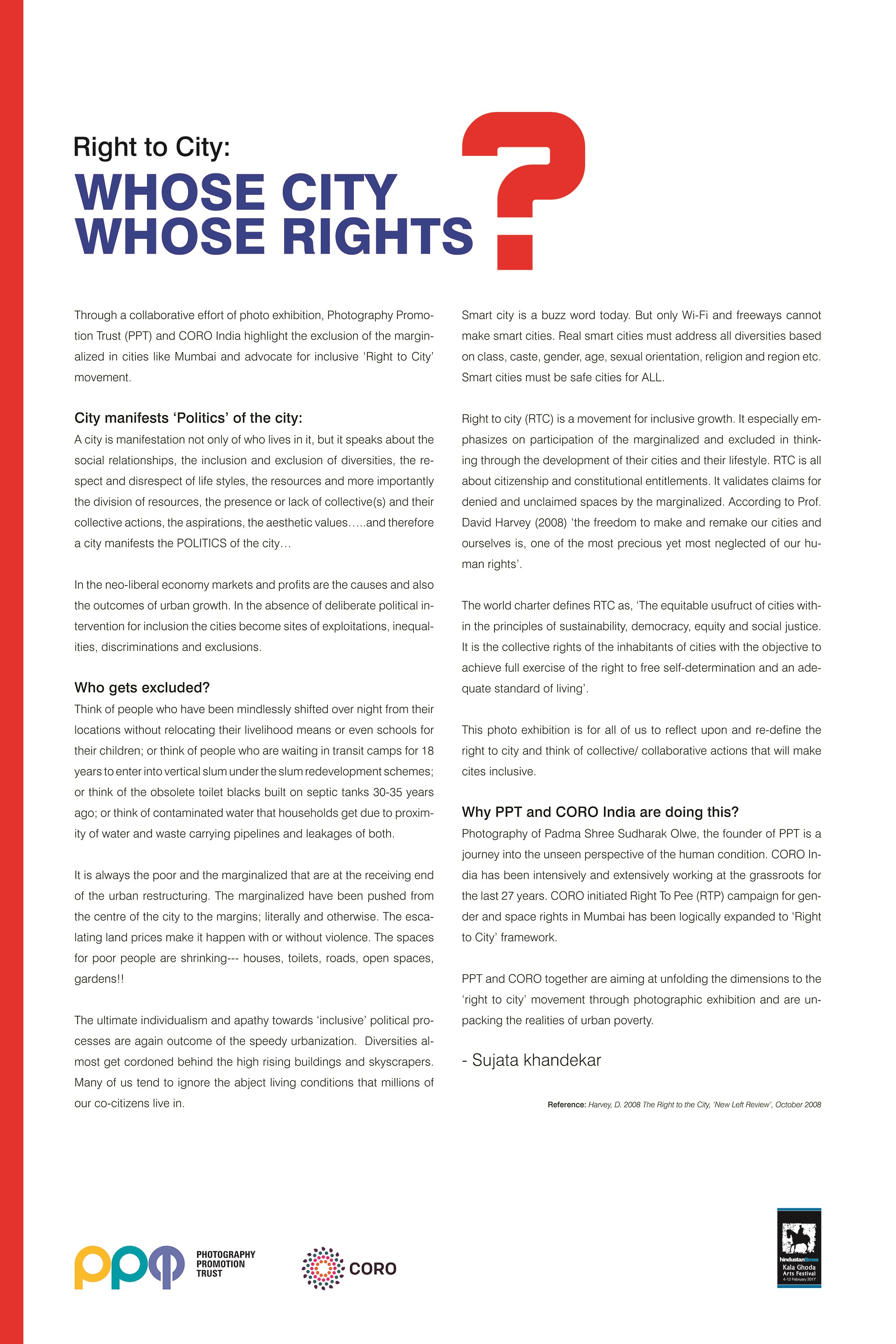