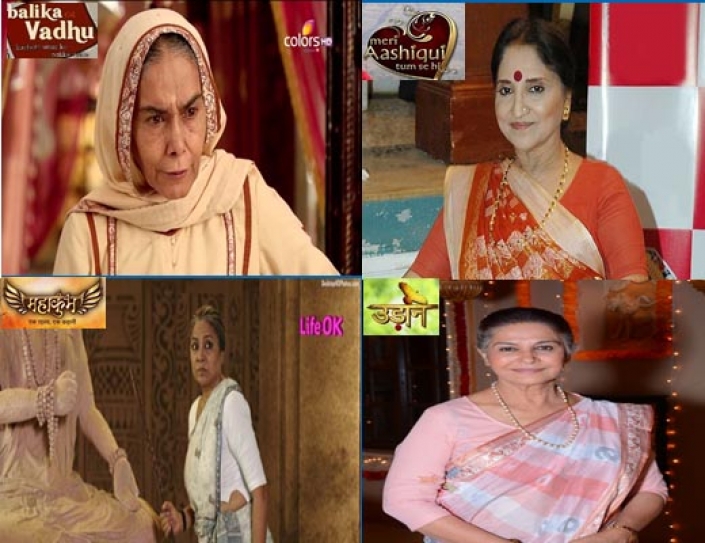 What scope do our regular prime time soaps offer in terms of performance oriented roles for a serious actor?? If one looks at the roster of actors, barring Surekha Sikri as Balika Badhu?s Dadisa, Suhasini Mulay as Dadi in Udaan, Seema Biswas in Mahakumbh? and Sarita Joshi in Meri Ashiqui Tumse Hi, there is precious little our soap makers can offer the old guard by way of roles with substance. It?s no wonder ?that in her career spanning 27 years, Seema Biswas did her first (and may be her only) TV series only recently. She wasn?t drawn to the small screen not because of the size, but it held no interest. She consented to play Mai Mui in Mahakumbh, as it was far removed from the soap genre. Between 1980 and the 1990s Television provided an outlet for some of the finest talent to emerge. Most of them had cut their teeth on the regional stage and had progressed to cinema via the off-beat films made by the likes of Shyam Benegal and others.? As television sets? found their place in urban living rooms across? the country, Doordarshan the national broadcaster invited content from producers. Production houses ?had a ready cast at hand, most of them established stage actors, who had also done regional and the new wave films. Television offered the latter? ?an outreach beyond their local theatre stage. As television sets stopped being status symbols and became a must in each home, Doordarshan had company from the private satellite channels. Content too became populist. The serials with their wholesome content and measurable performances were edged off the screens? by glitzy melodramas. The actors of the pioneering shows simply couldn?t catch the bus, except an odd serial. Soon their talent was redundant. Sure television awards nights recognize talent, but the top awards are by popular votes and a side bar is the jury award which invariably is an honest recognition of an authentic performance. Actors under-40s have yet to grab that award. Television in India is so ruled by popular tastes that audiences barely know the name of the actor, ?but ?remember the name of the character. I was once put into the grinder by two friends who watched too much of the K serials and remembered all the characters? names. My memory served me only with the main characters in the saas-bahu? stables. They quizzed me for a good hour, that evening and made me watch the shows till the character came on screen. The actor was Urvashi Dholakia. When the character is paramount even the channels capitalize on it. Their in-house awards nights and other shows ?feature the casts of all their shows, each of them ?in??? costumes and in character. Taking home? the trophy for? Best Bahu or Best Family etc. is the evening?s call.? Furthermore, the young acting talent is motivated by the various reality shows which keep them in the spotlight. It was quite a treat to see Amol Palekar, Divya Seth-Shah, Raghuvir Yadav and Kurush Deboo in stellar? roles in? Life OK?s Ek Nayi Ummeed ? Roshni. It attracted the veteran star line up purely on the basis of its content and intent which is ?far removed from the glitzy primetime glycerin filled fare. These actors and their ilk could never have played out the melodrama?not for a million bucks. Producer-writer Sanjay Tripathy?s script and the treatment by Suhail Tatari required performers of? standard, the handpicked? cast of the? veterans and the young actors will ensure? a fine blend of performances. Finally, a band of actors takes centre stage.