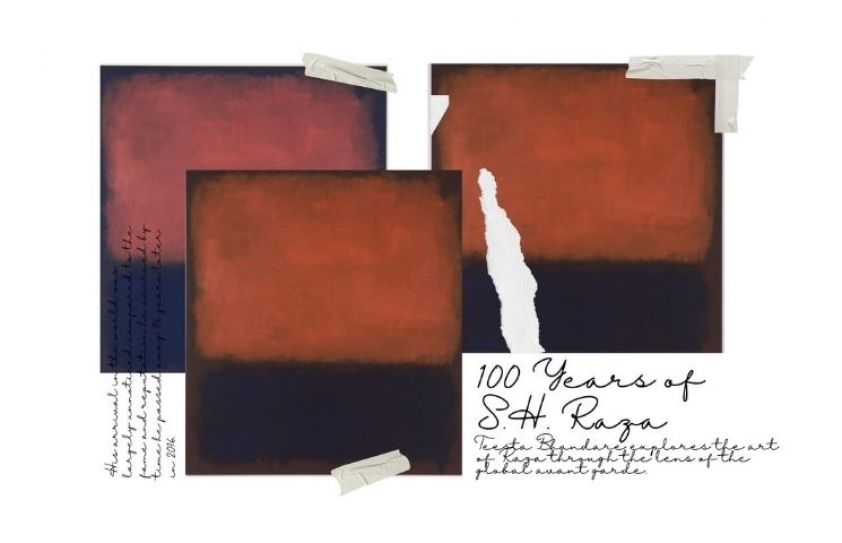 Teesta Bhandare explores the art of Raza through the lens of the global avant garde.

On February 22, 1922, in a sleepy forest town in Madhya Pradesh an infant by the name of Sayed Haider Raza (S.H Raza) was born. His arrival in the world was largely unnoticed compared to the fame and reputation he accrued by time he passed away 96 years later in 2016.

2022 marks 100 years since Raza’s birth. He is known widely for pastoral landscapes and more so for his bindu (Sanskrit for point) works. However, 100 years later what rarely comes up is the whirlwind of international forces that have found their way onto his canvas. In 1950, a 26-year-old Raza undertook a journey by sea to France, where he would study at École nationale supérieure des Beaux-Arts in Paris. The first exhibition Raza saw in Paris was that of Henri Matisse.

Matisse’s influences, particularly from his fauvist period, can be seen clearly in Raza’s works. Though Raza’s portraits are rare, his pastoral landscapes and cityscapes are characterised by the rough brush strokes, distorted sizing and flurry of colours also associated with fauvism. As a young artist, with barely any grasp over French or English, Raza found comfort in these works and those of Paul Gauguin’s from when the latter was in Tahiti.

As an Indian student of art history in the United States, I found these depictions of the orient by European artists to be racist - to draw their own women as delicate and those of the other as disproportioned and almost beast-like. However, Raza viewed their works to the contrary. Yashodhara Dalmia writes, in her biography of the artist, that Raza found these works “closer to the oriental aesthetic that he was familiar with.” He drew comfort from these works, especially during his first few years abroad. During his early years in France, he brings the forests of Madhya Pradesh to his canvas, as well as the towns and villages of his new home. He draws inspiration from modernist icon, Paul Cézanne. Raza noted Cézanne’s repetitive imagery of houses found in the idyllic French countryside. Raza drew inspiration from this repetition by making it his own with an intense and deep colour pallet, with hues of red, brown and dark blue.

In fact, the entire Progressive Art Group, of which Raza was a member during his formative years as an artist, can be viewed as “anarchic”, according to co-founder F.N Souza. A synthesis of colours and emotions, organisation where there looked like there was none, a full-fledged immersion in the subject matter was key to defining PAG, the European modernists and the Abstract Expressionists of New York.

After creating a name for himself and patronage in France, in 1962, Raza spent time in the United States, first as a visiting professor at the University of California, Berkeley and then in New York City. During his time in North America and while at Berkeley Raza became acquainted with abstract expressionist, Sam Francis. 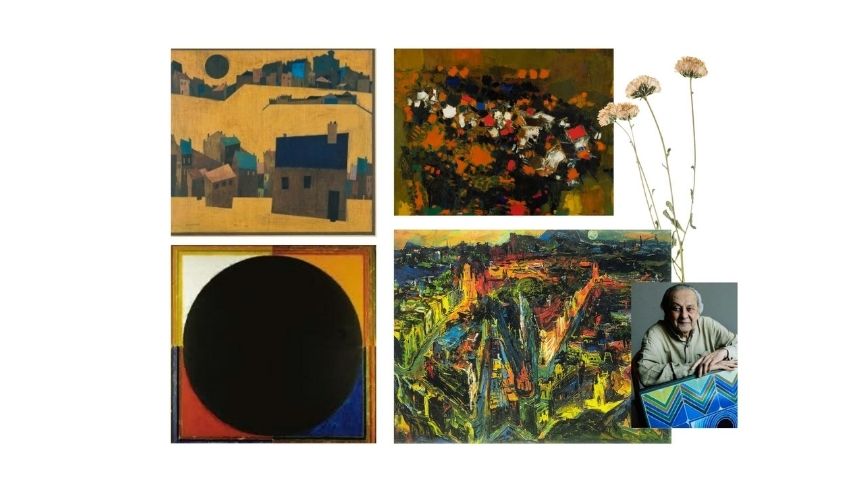 Subsequently he became exposed to the practices of other abstract expressionists. The 1950s were when Jackson Pollock began working on his signature drip paintings. The 50s were also a time for growth in Raza’s practice where he established himself and his central landscape works. His time in America furthered his experimentation with abstraction. Outside of his exposure to Pollock’s works, Raza sought influence from Mark Rothko. He said, after seeing Rothko’s works, “It was like a door that opened to another interior vision. This inspiration can be seen most clearly in Raza’s work from 1962, titled Paysage.

Separated by oceans, at a time when travel took days, a world without internet, three groups of young artists, who may not have even known about each other, were connected by their desire to break free from traditions and constraints of the past. The dived into a new modern world characterised by abstraction, an aversion from conventional styles of painting and depictions of the everyday. However, what distinguished each group was what the everyday compromise for the artists within the group was, and in many cases the types of colour used. For instance, with Raza, tantric principles played a crucial role in how he composed his works and the colours used, primarily red, black, green and blue. While we see red and black frequently in the works of Rothko, the same deliberated thought to composition cannot be found in the Fauvists and post-impressionists, the PAG and the Abstract Expressionists. There is clearly strength in numbers to challenge the norm, fast-forward to the 1990s and the group Young British Artists (YBAS) in the UK, comprising Damien Hirst and Tracie Emin.

100 years after his birth we must celebrate a great avant garde artist for the body of work he left behind, and for his legacy as a truly international maestro. International in his experience, influences and the mark he left on the world. Chinese artist, Hsiao Chin who is 13 years younger than Raza, has drawn influence from both Mark Rothko and Raza. The latter’s career trajectory unintentionally drew parallels from his former Chinese classmate from Academie des Beaux Arts, Zao Wou-Ki. This chain of interconnectedness begs the question that even as we travel and search for inspiration in unknown people, places and things, do we always and often inadvertently find our way back home? With Raza his later works, which were largely depictions of the bindu within tantric compositions, he too returned to his roots. At the age of 12 his schoolteacher advised him to stare at a circle on a wall, a bindu, to help him focus. Almost 70 years this circle and this learning experience from childhood would be the guiding force behind his works till the very end of his life.