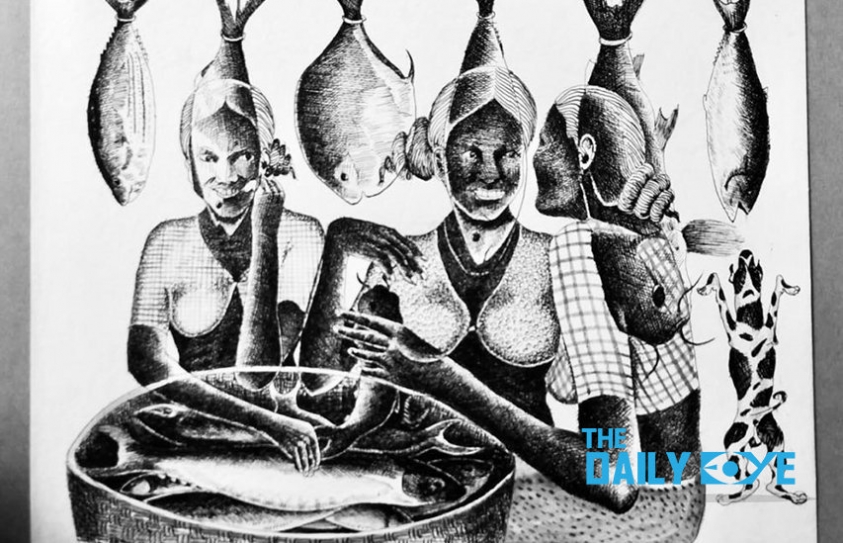 Yesterday He faced Starvation; Today He’s a Star in his Own Right on the Art Firmament

The bustling town of Vadodara – familarly known as Baroda – houses a count of nearly 2,500 artists. Of them, there are the globally feted masters, a rapidly-rising stratum of established artists in various media, and those who’re struggling to impact the art market.

Subhakar Tadi has been on the scene for more than a decade now. He’s established, having exhibited at solo and group shows and prestigious biennales, across the nation. And his signature is at its most legible in his black and white works, which at times, are sourced in photographs.  The use of spray paint, graphite powder, acrylic and oils, distinctively heighten the sub-text of surrealism.

His earlier works were figurative, displaying a flair for near-photographic draughtsmanship, and were inspired by the everyday scenes in his homeland, the coastal Vegivaripalem village of Andhra Pradesh. Boat craftsmen, vendors of fish, rice farmers and resilient rustic folk come to life in monochrome as well as as in a minimalist palate of colours.

His later, edgier artworks are a distinct departure from the nostalgic yearnings for the home he left behind to seek his calling in the artworld. I get in touch with Subhakar, on seeing a black-and-white composition, which takes off from a famed image of Alfred Hitchcock shot by the American portrait photographer Philippe Halsman.

Alluding to the suspense auteur’s film The Birds (1963), Halsman’s portrait serves as the springboard for the artist’s flight of imagination. In a similar vein, the artist is known in art circles, for updating a portrait of a young Mohandas Karamchand Gandhi in a contemporary setting, to underscore the Mahatma’s timeless relevance.

I meet Subhakar Tadi in the course of one of his brief visits to Mumbai.  Pointedly articulate, he speaks fluently in English, but smiles shyly, “I went through both Telugu and English medium schools. So I’m not proficient in either of the two languages.” Indeed, there’s a certain boyishness and humility about the 38-year-old, which is quite contradictory to artworks which disclose a maturity and a muscular swagger.

That humility could stem from his origins. His father was a ‘ladies’ tailor’ who went against the Tadi family’s traditional occupation of tapping toddy, the affordable palm wine. 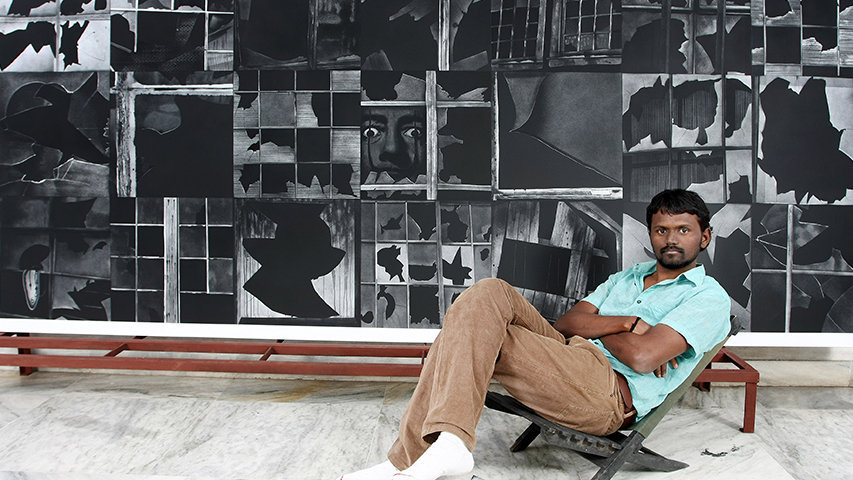 The tailor’s son possessed a gift for drawing which was discovered and encouraged by his neighbours and subsequently by M. Veeranjaneyulu, whom Subhakar considers as his abiding guru. The first sketch attempted by the boy was of Michael Jackson, whose music was a rage even in far-flung stretches of India. Subsequently, he painted images of goddesses for a calendar.

“To my own surprise, I could draw in perfect proportion,” he grins bashfully. “So the dream of becoming a chartered accountant who would provide for his parents, a brother and a sister, went flying out of the window.”

Although, studying art was a gamble, his father saw him through a degree in printmaking at the Andhra University, Vizagapatnam, followed by a masters’ in the discipline at the Maharaja Sayajirao University in Vadodara.

An incident at Vadodara prompted him to pursue art study without surrendering to options such as teaching or switching over to the lucrative domain of animation. On a Sunday, when the hostel’s canteen didn’t operate, a street vendor refused to serve three cash-strapped artists and him, a rice plate. They pleaded they would pay him in a day or two. No go.

Next day, he ‘phoned up his father to “scold” him for making him starve’. The father said he would transfer Rs 4,000 to his bank account as soon as possible and broke into tears.

The Evening, etching and aquatint, 2000

“On hearing him weep,” the artist recalls. “I had to become responsible for the journey I had chosen. Most of us artists don’t have a clue about money management. I still don’t. But I couldn’t become a parasite for the sake of my own vanity,” he narrates, pointing out that fortuituously his artworks became hot-sellers between 2007-’09, when the art market was flourising.

The artist is married to an art teacher. They have a seven-year-old daughter Kashvi. Following the worldwide recession of 2009 right to date, there has been a downcurve. Intermittently his works have fetched cushy prices but there have been blank months which were unnerving.

Subhakar states that, at large art is regarded as an investment on the lines of “stocks and shares”. Moreover, the accent is on “comfortable art”, in accordance with the structures of Vastu and Feng Shui consultants. A Baroda businessman, who had acquired a large artwork of his, returned it within a week. “He said since it showed a crow, it was inauspicious,” the artist rewinds. “Even the watchman at the gate laughed, ‘How do you expect a kauwa to adorn his residence?’ That hurt. I was so angry that I destroyed the painting.”

Question: Can he take criticism? “Absolutely,” he reacts coolly. “The eminent curator Peter Negi had negative views on some of my works which I accepted positively. That helped me to understand my work better. Also if I’m told that I’m influenced by Britain’s graffitti artist Banksy and by David Hockney, I don’t contradict that. Actually, scores of important artists have elements of Hockney. Above all, my vision, if I may call it that, has been sharpened by the genius of Bhupen Khakhar, Edward Hopper and photographers Henri Cartier-Bresson and Raghu Rai.”

Right now, Subhakar is in the midst of a series titled Mind, conceived on coming across a line by the Florence Shinn, the American artist and book illustrator of the early 20th century. The line cautions “If you don’t run your subconscious mind then someone else will run it for you.”

Looking sombrely at me, he concludes, “If you don’t believe somewhere within you that you’re a star, then you might as well spend the rest of your life staring at an empty canvas.”