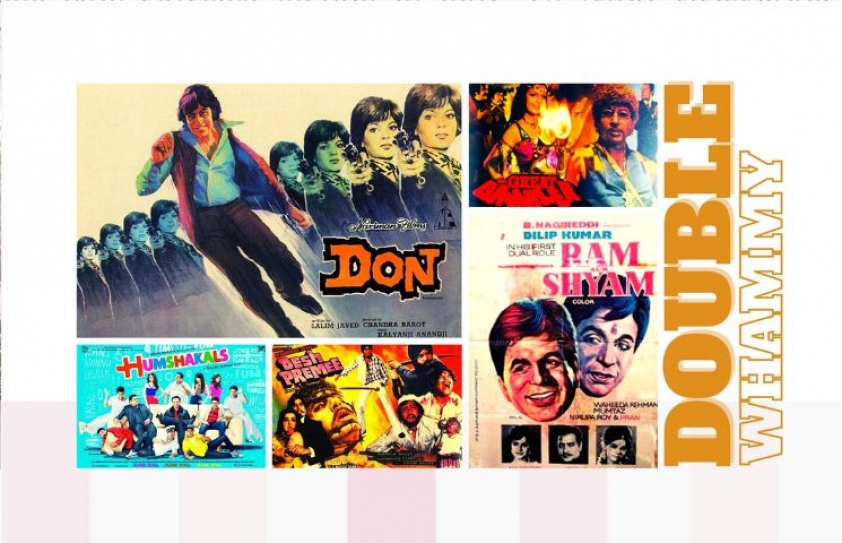 Double roles are as difficult to perform as they are tempting to attempt. Our audiences have found them to be fascinating - since they received a double dose of their favourite filmstar at the price of one ticket. There was a time when every artist be it a hero, heroine, villain and even the comedian felt that their careers were incomplete until he or she enacted a double role to express their versatility.

This ongoing trend appears to have originated from Hollywood’s The Prince and the Pauper (1937), starring doppelgangers Billy and Bobby Bauch based on Mark Twain’s novel, and The Corsican Brothers (1941), adapted from a novel by Alexandre Dumas, a swashbuckling adventure in which Douglas Fairbanks Jr portrayed twins separated at birth.

In Bollywood double roles have been a frequently recurring motif. However, at times this could turn out to be hazardous since only a handful of artists would be able to rise to the occasion.

Shooting these scenes was tiring as the actor would have to switch on and switch off to participate in the same scene playing two distinctly different characters. It is also a time-consuming process: the technicians have to mask the camera to shoot the same scene twice over. Just imagine, Sanjeev Kumar played nine different roles in the film Naya Din Nai Raat (1974).

Since a majority of our actors have essayed a double role in their illustrious film careers today, we take a look at the noteworthy dual role performances. 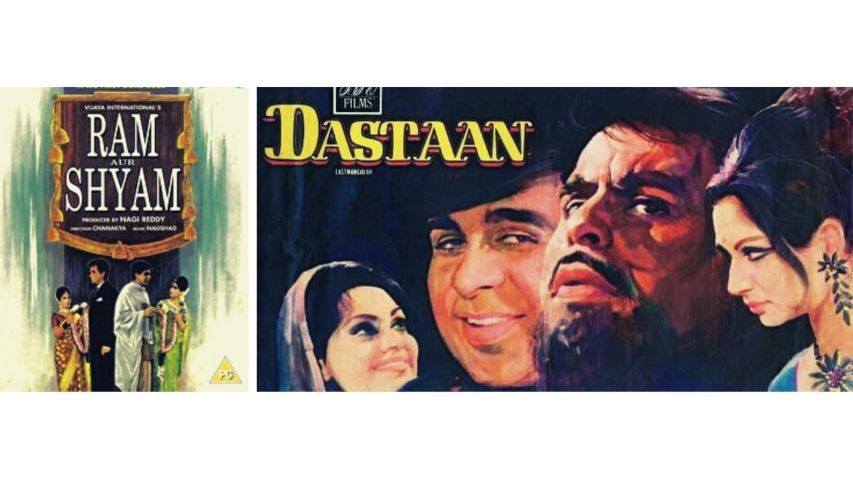 Dilip Kumar excelled in a double role in director Tapi Chanakya’s by-now iconic Ram Aur Shyam (1967) along with Waheeda Rehman, Mumtaz, Nirupa Roy and Pran. It was a remake of his own Telugu blockbuster Ramudu Bheemudu (1964). Popular as the tragedy king, Dilip Kumar surprised the audiences with his alternately comic and brooding performance, which won him the Best Actor trophy at the 15th Filmfare Awards.

He essayed a double role again in B.R. Chopra’s Dastaan (1972) opposite Sharmila Tagore and Bindu but it was a commercial failure. Asit Sen’s Bairaag (1976) was an attempt to play a triple role opposite Saira Banu and Leena Chandavarkar but failed miserably. It was a delayed project, however the thespian returned after five years with Manoj Kumar’s multi-starrer Kranti (1981) in the strong character of Sanga.

Years later, he was once again seen in a double role in Qila (1998), which was directed by Umesh Mehra along with Rekha, Mukul Dev and Mamta Kulkarni. It failed to create a buzz at the ticket counters and also remains the late actor’s last film. 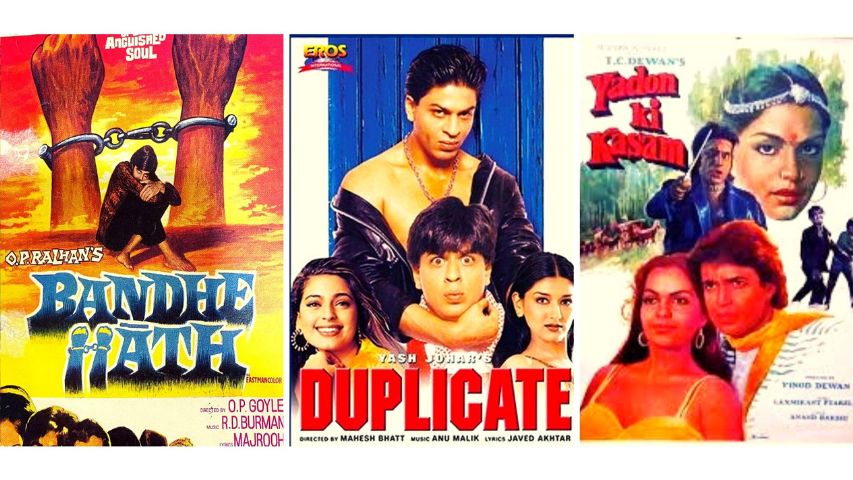 Rajesh Khanna was seen in a double role in his debut film Raaz (1967) opposite Babita produced by G.P. Sippy. It’s another story that Chetan Anand’s Aakhri Khat (1966) released before Raaz, which had an average run at the ticket counters even though it was an engrossing whodunit.

Director Jambu’s Humshakal (1974) again saw him essaying a double role opposite Tanuja and Moushumi Chatterjee. It did well at the ticket counters while its music by R.D. Burman too remained popular.

Mehbooba (1976) directed by Shakti Samanta, which was a reincarnation theme, again saw him in a double role. Despite the superlative music by R.D. Burman the film tanked. Neither did the dual try in Satpal’s Bhola Bhala (1978) with Moushumi Chatterjee and Rekha save the superstar’s flagging career.

Chetan Anand’s Kudrat (1981) was a brilliant film with suspense-reincarnation as its theme. Here in a double take he was in the company of Hema Malini, Vinod Khanna, Raaj Kumar and Priya Rajvansh. Kudrat had an above average run but it is still remembered for its fabulous musical score by R.D. Burman. The same year came Ambarish Sahgal’s Dard (1981), which was appreciated and did well at the ticket windows. Here he was seen playing the father and the son. Joshiy’s Dharm Aur Qanoon (1984) yet again saw him in a dual role opposite Asha Parekh and Jaya Prada but it was thumbed down by the audience. 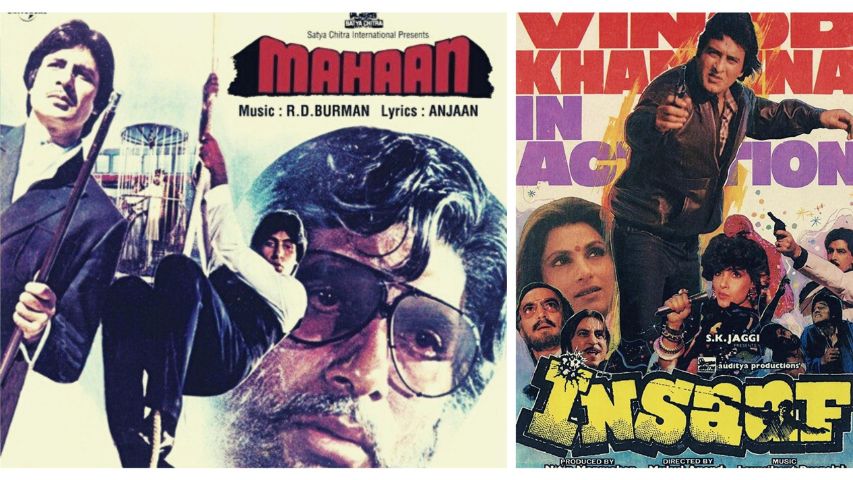 O.P. Ralhan’s Bandhe Haath (1973) featured Amitabh Bachchan in a double role for the first-time opposite Mumtaz and Kumud Chhugani but failed to create a buzz.

Next came Narendra Bedi’s Adalat (1976) in which he portrayed both father and son along with Waheeda Rehman and Neetu Singh. 1978 saw him in the iconic Don as an underworld criminal and his look alike Vijay opposite Zeenat Aman. Don was a blockbuster, spawning the Don franchise directed by Farhan Akhtar, with Shah Rukh Khan.

The very next year Bachchan was in Shakti Samanta’s The Great Gambler in a dual role opposite Zeenat Aman and Neetu Singh. This was shot on international locations with memorable music by R.D. Burman. The year 1982 was the year of double roles for Bachchan. He played dual characters in three films. Raj N. Sippy’s Satte Pe Satta inspired by the English film 7 Brides for 7 Brothers (1954). Then there was Hrishikesh Mukherjee’s Bemisal followed by Manmohan Desai’s Desh Premee in which he played the father and son, co-starring Hema Malini, Navin Nischol, Parveen Babi and Sharmila Tagore.

The E.V. Satyanarayan film Sooryavansham (1999) was in which he played a double role again. Such roles always meant more footage and less competition from other actors. Though it bombed, it amasses the highest TRPS on TV re-runs. Incidentally, Amitabh Bachchan and Jeetendra scored the maximum double roles in their careers. 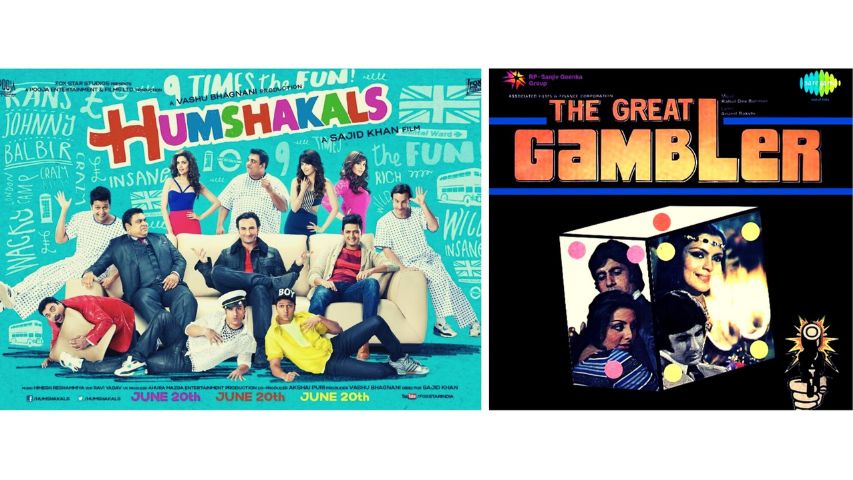 Sadhana was partial to double roles, starting with Raj Khosla’s mystery thrillers Woh Kaun Thi (1964) opposite Manoj Kumar, Mera Saaya (1966) opposite Sunil Dutt, and Anita (1971) with Manoj Kumar. Later she was seen in a double role in her directorial debut film Geeta Mera Naam (1974) opposite Sunil Dutt and Feroz Khan. A film of hers, Amar Kumar’s Mehfil, released after a prolonged delay in 1981 in which she played a double role opposite Ashok Kumar and Anil Dhawan, but the film is barely remembered. 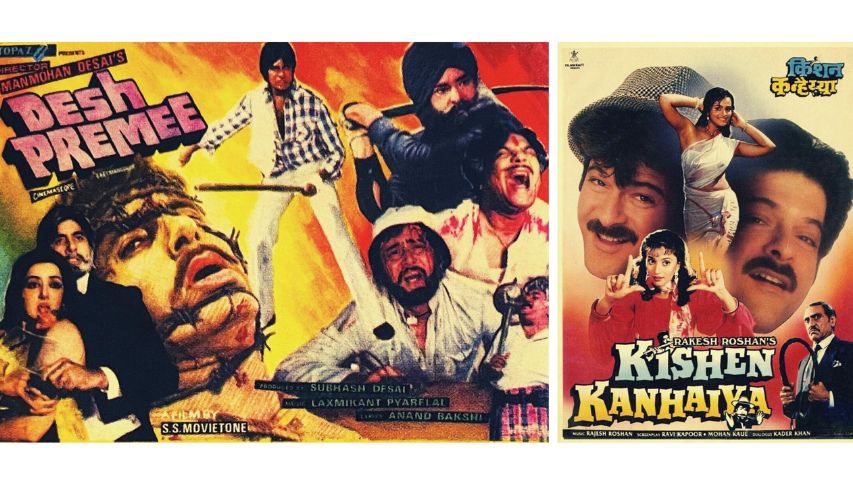 Hema Malini’s first double role was in Seeta Aur Geeta (1972) opposite Dharmendra and Sanjeev Kumar. It was a story of identical twins separated at birth and heavily inspired by Ram Aur Shyam (1967). It was directed by Ramesh Sippy and written by Salim Javed. In the year 1976, one saw her again in a dual role in Jaaneman opposite Dev Anand. Ghost and reincarnation themed based films were another excuse for double roles. Hema essayed dual roles in all three films based on suspense and past lives in Mehbooba (1976), Bandish (1980) and Kudrat (1981). While Mehbooba was a wash-out, Bandish and Kudrat were luckier at the ticket windows. Incidentally, all the three films were opposite Rajesh Khanna. 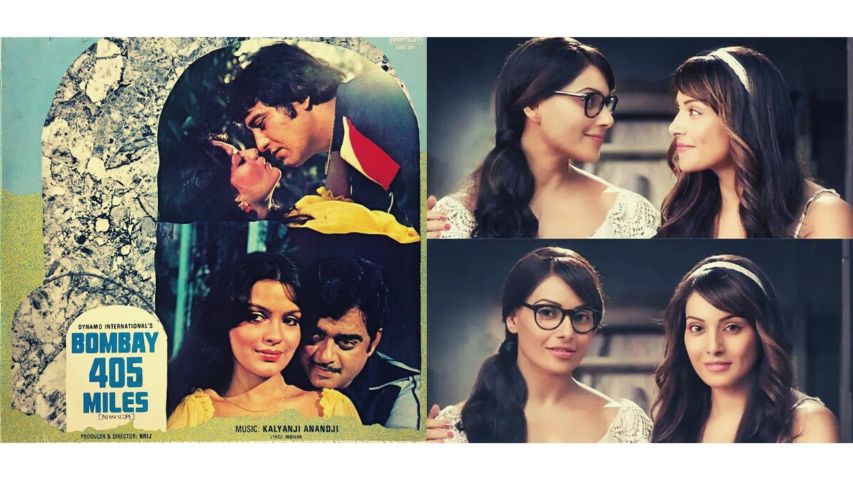 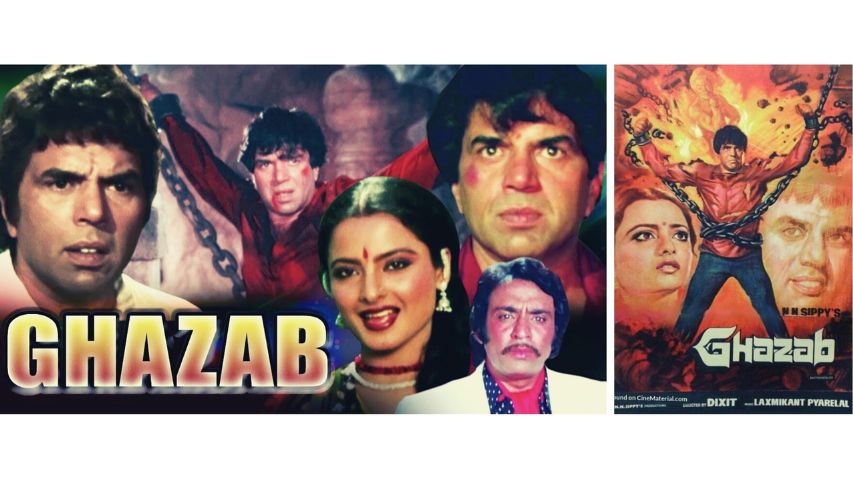 Sridevi too essayed dual roles in many of her film films. He first double roles were in Guru (opposite Mithun Chakraborty) and Chaalbaaz, both released in 1989. Chaalbaaz was inspired by Seeta Aur Geeta (1972). Sridevi excelled in the roles of Anju and Manju along with Rajinikanth and Sunny Deol.

Next, one saw her in a double whammy in Yash Chopra’s Lamhe (1991) in which she essayed the roles of both mother and daughter opposite Anil Kapoor. Lahme failed to click but remains one of her best performances. The same year there were dual roles in Banjaran (1991), which was based on the reincarnation theme and the Mukul S Anand film Khuda Gawah (1992) opposite Amitabh Bachchan. Gurudev (1993) directed by Vinod Mehra also saw her in a dual avatar opposite Rishi Kapoor and Anil Kapoor but it tanked at the ticket windows – it found a release after Mehra had passed away.