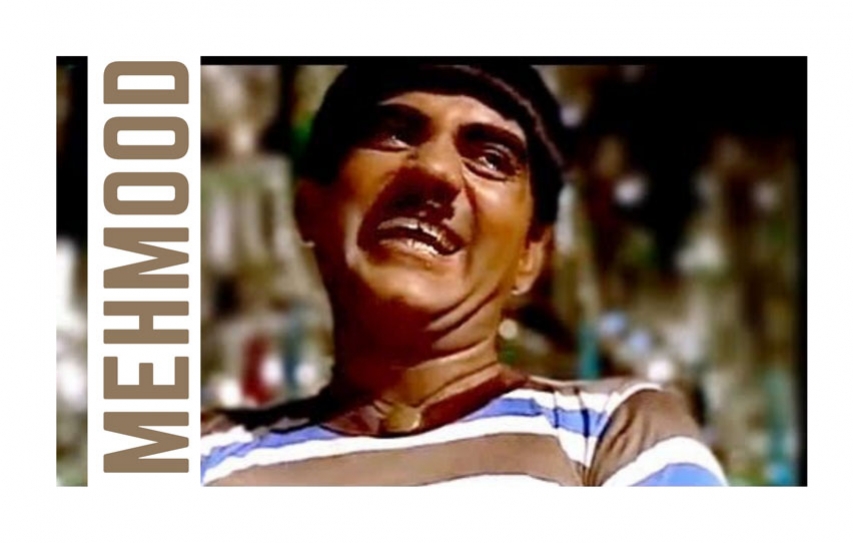 Jagdeep who passed away earlier this month, was the last of the generation of actors who specialised in the art of comedy. In fact, once upon a time, there would be a distinct ‘comedy track’. The movies, whether sunny or dark, would work in a chunky sub-plot to keep the audience chortling in the aisles.

This track was essential to stretch the screenplay since Hindi films were calculated to keep the viewers engaged for a running time of close to three hours. This accounted for a wonderful ensemble of comic actors - Agha, Dhumal, Asit Sen, Mukri, Rajendranath and so many more - whose antics tickled the viewer’s funny bones.

During the 1950s, Johnny Walker was the Laugh Raiser No.1. Came the 1960s and the child actor-turned-mirth maker Mehmood was  anointed the King of Comedy.

Indeed circa 1968, Mehmood had featured in as many as 10 films in a stretch of 12 months. Of these, five films ranked among the top hits of the year: Aankhen, Do Kaliyaan, Neel Kamal, Padosan and Suhaag Raat. The funster had affirmed his credentials as the proverbial scene stealer, snatching the spotlight away from the popular leading men of the box-office toppers: Dharmendra, Biswajeet, Raaj Kumar, Sunil Dutt and Jeetendra.

So why am I backtracking down comedy lanes today? For two reasons primarily.

One, that circle of charismatic actors who specialised in comedy, has gone extinct, unmourned. Knockabout farce, double entendres and rank chauvinism, performed by the leading heroes and heroines themselves, have taken over, as exemplified by the comic franchises like Housefull, Masti and Golmaal.

And two because, the estimable output of  Mehmood, has been largely erased from the millennials’ mind. Of course, nostalgia-philes continue to hold him in tremendous regard, but that’s it. 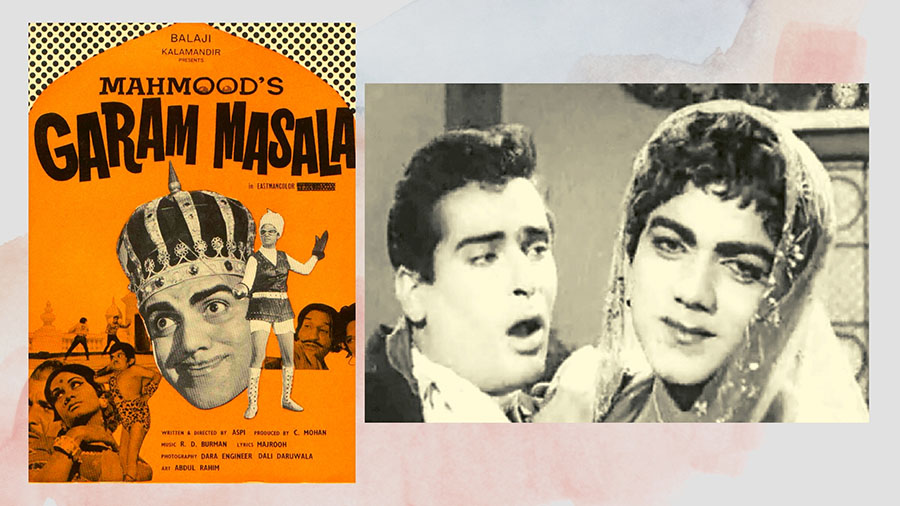 In this context, I’d say the funster had the knack of achieving practically every quality of laugh-raising. I turn to the revered novelist, poet and film critic James Agee’s seminal essay to illustrate this point: “…four of the main grades of laugh are the titter, the belly laugh, and the boffo. The titter is just a titter. The yowl is a runaway titter. Anyone who has had the pleasure knows all about the bellylaugh. (And) The boffo is the laugh that kills. An ideally good gag, perfectly constructed and played, would bring the victim up this ladder of laughs by cruelly controlled degrees to the top rung, and he groaned for mercy… then he would feel the first wicked tickling of the comedian’s whip once more and start up a new ladder.”

No one has said it better than Agee, and this was way back in 1941. And among our patheon of comedians no one has ever done it better than Mehmood. When I see stand-up comics at shows, it can be detected that they depend on risible jokes, political swipes, insults galore and barbs fired at themselves and the audience. That evokes a hallful of chuckles and chortles, okay, but the factor of comedy has been watered down tremendously.

As the stage performances, themselves, well erm you have to have a high level of tolerance for cornball jokes, gags, whatever. Anyway, was the show worth the price of a hefty ticket?

Not surprisingly, then, Mehmood’s sense of comic timing, deadpan humour, quicksilver change of accents, expertise in varying his dialogue delivery (remember his takes on the Hyderabadi dialect, as in the suspense thriller Gumnaam (1965), not to forget his gift for breaking into rambunctious dance numbers, have remained one of a kind.  Indeed, the film’s Hum Kaale Hain To Kya Hua Diwale Hain, is one of the earliest articulations against the ongoing prejudice against skin colour.

Quite tellingly, in 1968 his big year of superhits, a pocket-sized avatar of his, Mehmood Jr was introduced in the Shammi Kapoor-Rajshree-Mumtaz film Brahmachari. What Mehmood excelled at, the junior clone imitated to the last roll of the eye and twist of the hip.

Incidentally, the original Mehmood was the first one to do the ‘lungi’ dance in Gumnaam which presumably inspired Shah Rukh Khan to break out into a similar act in Chennai Express (2013). Coincidence unintended? 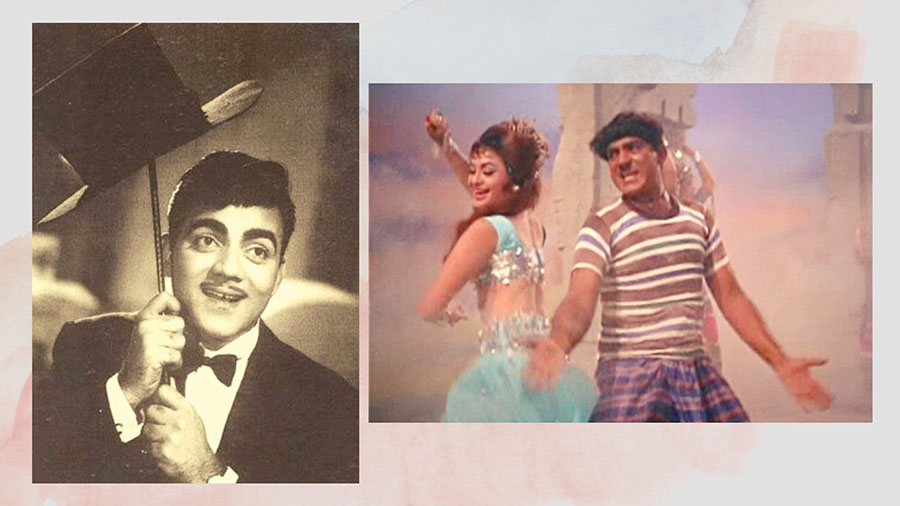 In his lighter roles Amitabh Bachchan, whom the comic actor promoted by casting him in the road flick Bombay to Goa (1972), has  frequently aped his mentor right down to pasting on a fake Hitler-style moustache. For evidence, check out the Bachchan song-and-dance set piece Khatoon Ki Khidmat Mein - Desh Premee (1982).

Moreover, Akshay Kumar has admitted in an interview that whenever he has to get into a funny mode, he has been inspired to replicate the styles of Mehmood, Amitabh Bachchan and Kishore Kumar.

Many would agree that Kishore Kumar, Johnny Walker and Mehmood have been Hindi cinema’s most outstanding comic actors. Sparks flew when Kishore Kumar gamely teamed up in the same frame to raise mayhem in Pyar Kiye Jaa (1966), Padosan (1968), Sadhu aur Shaitan (1968) and Bombay to Goa. To date the howlarious narration of a faux ghost story by Mehmood in Pyar Kiye Jaa has survived the test of time. Ditto the goofball vibes between Kishore Kumar and Mehmood in Padosan, an undervalued entertainer of its time.

Mehmood’s personal life wasn’t as upbeat as his screen chutzpah though. Married twice and linked during his latter years with his frequent co-star Aruna Irani, he hadn’t attained stardom easily. He had worked as a chauffeur to director P.L. Santoshi; and would often earn a few rupees by teaching table tennis. The son of actor-dancer Mumtaz Ali, he had to be recommended by his real-life sister-in-law Meena Kumari to start out his career in brief sidebar character roles  in Bimal Roy’s Do Bigha Zameen (1953), Raj Khosla’s C.I.D. (1958), Guru Dutt’s Pyaasa (1957) and Kaagaz ke Phool(1959). 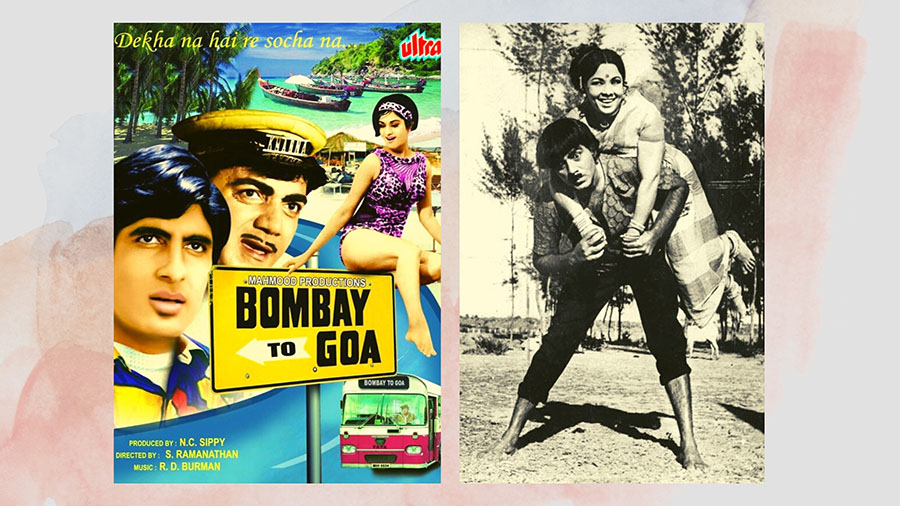 Subsequently, when the actor began to wow the audience in the comedy tracks, forming a perfectly zany pair with Shubha Khote, it is said that quite of a few of the frontline heroes weren’t amused. At their behest, the scene-stealer was dropped out of scores of plum projects. Lore goes that Shammi Kapoor and Dharmendra were among the very few heroes, who didn’t feel insecure about Mehmood’s rapidly rising popularity.

To cock a snook at the movie moghuls who began to shun him, Mehmood initiated his own film production company, besides double-tasking as an actor and director. Only two of the seven films he directed, clicked majorly. Bhoot Bungla  (1965) was memorable especially for a cameo acting role by R.D. Burman who also composed the terrific music score (including the number Aao Twist Karen a la Chubby Checker’s Let’s Twist Again). And there was Kunwara Baap (1974), an emotionally wrenching account of a rickshaw driver who adopts a polio-stricken, abandoned child.

Advancing age, recurring ailments, a disorderly family life and the inevitable subtraction of fame, compelled Mehmood to spend most of his time in a Bangalore farmhouse.