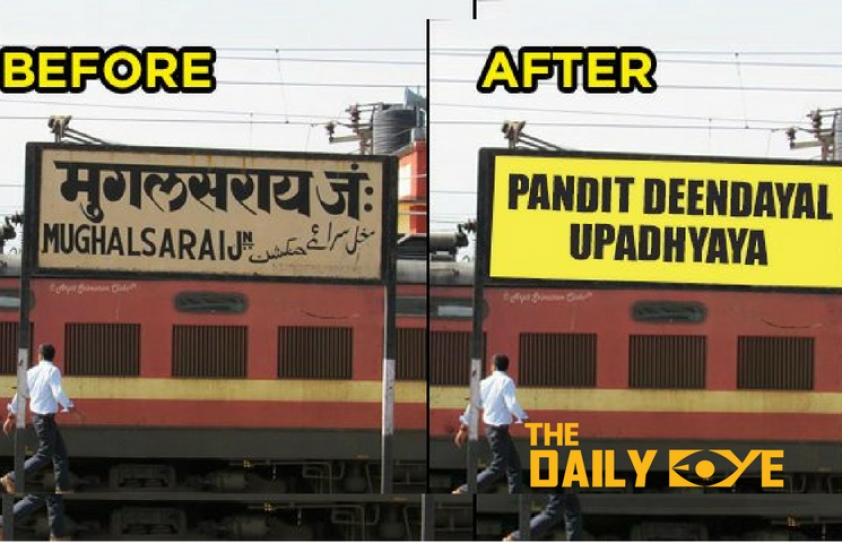 Why Modi Government's Renaming Frenzy is a Political Act of Invasion

About five years after Madras got renamed as Chennai, Shashi Tharoor, in a newspaper column in 2002, in a dig aimed at the renaming frenzy that surges up in the hearts of Indian politicians periodically, remarked, "The weather will be just as sultry in Chennai as it used to be in Madras. But are we Indians so insecure in our independence that we still need to prove to ourselves that we are free?"

The current obsession of this government with renaming roads, villages and public institutions is not centered around any notion of freedom from colonial rule (as in an Ochterlony Monument turning into a Shahid Minar).

It is not a parochial renaming like Mumbai from Bombay, nor even an attempt at communist revamping such as Lenin Sarani from Dharmatalla Street in Calcutta (now Kolkata) but a muscular and aggressive exercise to weed out Muslim names and replace them with Hindu ones, and where possible, with the names of Hindutva ideologues. 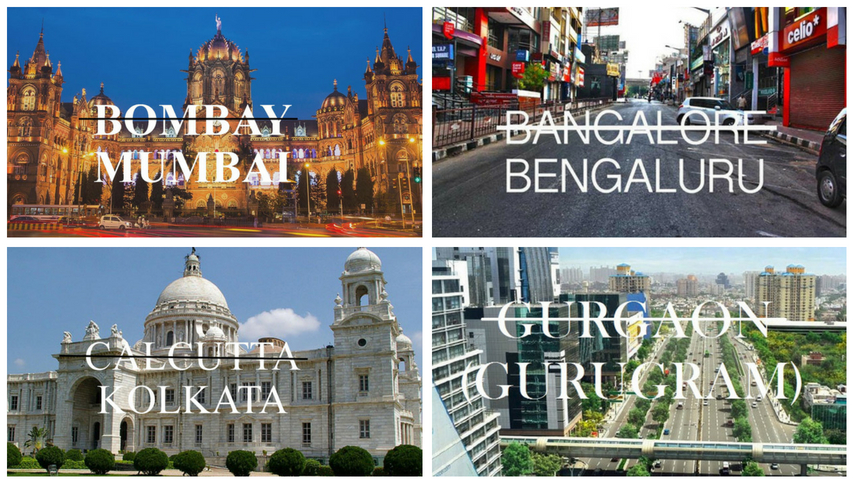 There is a fine line between a symbolic statement of freedom and revanchist marking of territory when it comes to renaming places. Perhaps the difference lies in whether one is naming something which one has built oneself or simply erasing and pasting one's own name to something someone else has built. The latter is definitely an invasive act born out of resentment and bitterness. To claim that one is "purifying" or reclaiming an invader's space is erroneous when that space was an act of creation and not destruction, and moreover, intended to benefit society at large.

Renaming has been controversial not just in India, but around the world.

In Africa, for instance, many countries changed their names at independence to create space between themselves and their former colonial overlords. So the Bechuanaland Protectorate became Botswana, or the 'land of the Tswana'. The Gold Coast became Ghana, or 'warrior king'. And Southern Rhodesia restyled itself as Zimbabwe — a nod to the Great Zimbabwe civilization that ruled from the 11th to the 15th centuries.

In April this year, King Mswati III of Swaziland announced that he was renaming the country 'the Kingdom of eSwatini'. For him, the old name had been a kind of symbol, of an African country poisoned by Western influence.

Changing the name is "built on the idea that we are reclaiming our values," says Bheki Makhubu, editor of The Nation, an independent political magazine in eSwatini. "It's like the King is saying, ‘Let's go back to our roots. Let's reclaim our identity from a world that wants to steal it from us.’"

It is not a move that has been unanimously accepted.

"It's also part of a narrow brand of nationalism that centres on the King himself," says Makhubu, a prominent government critic. Renaming the country allows Mswati to frame himself as a true patriot, Makhubu says, "even though we have an absolute monarchy that's utterly failed our people".

When Mobutu Sese Seko became the president of Congo in 1965, he launched an aggressive campaign of what he called authenticité to scrub the new country clean of its old colonial influences. Much of it centered around changing the names of people (he dropped the Western-sounding 'Joseph-Désiré' from his own name) and places (the capital Léopoldville, for instance, became Kinshasa). And in 1971, Mobutu announced that he was changing the name of the country itself, to Zaire - a local name for the Congo River.

Mobutu's rule didn't last long. And when a new president, Laurent-Désiré Kabila, came to power in 1997, he announced he was changing the name back to Congo.

But the decision to change a name is almost always at least as much about the present as the past.

Take the 27-year dispute between Greece and Macedonia, purportedly over the origins of Macedonia's name. Greeks say the word belongs to them and them alone, since the ancient kingdom of Macedonia ruled by Alexander the Great was largely based in modern-day Greece. Macedonians, meanwhile, say that the same kingdom contained much of their modern country, and so they have just as much claim to the name as the Greeks do.

A long-running spat over a move to rename the South African capital, Pretoria, is a reminder of the popular significance attached to city names - and the sensitivities that can be stirred by trying to change them. Pretoria was named after a settler and folk hero from the Afrikaner group, which went on to create the apartheid system. It is now expected to take the name Tshwane, after a black tribal leader who ruled long before white colonisation. The name also means 'we are the same' in the Tswana language.

Ironically, South Africa's last apartheid President FW de Klerk has argued that Pretoria remains a proud name because of its anti-colonial association — with the Dutch Boer struggle against British rule. But Pretoria's renaming is part of a national drive to make South African cities sound more African, which its proponents say fits with a continent-wide trend in the post-colonial era.

In some cases, cities are renamed to assert local pronunciations over foreign ones.

The Burmese government decreed that their capital should be known as Yangon — and not Rangoon, as spelled by the British after they annexed the city in 1852.

The name of the Chinese capital has been changed in several ways over the years. During China's 1928-49 civil war, the Kuomintang party decided to call the city Beiping, or 'Northern Peace', and not Beijing, the 'Northern Capital', which it thought legitimised the city's then warlord government. That was reversed by the victorious Communist Party in 1949, but the use of Beiping continued for years in Taiwan, seat of the ousted nationalists.

There is, however, a big difference if the word 'invader' is conflated to the Mughals and the Sultanate before them, those who assimilated themselves here, and enriched its economy and culture over 600 years, and that word is used as a dog whistle to alienate and demonise an entire community.

For Hindutva ideologues, the assumption of stasis and permanence of an entire Hindu population, caught like a fly in amber, their gene pool unaffected, their customs and world views intact for 4,000 years, is astounding. It is as if an enchanted people have been holding their breaths, frozen in time in a vacuum behind a force shield, while outsiders like the Shakas, Huns, Kushanas, Mongols, French, Portuguese and British, have come and done their worst, and are now just picking up where they left off.

And to them, an essential part of that picking up has to do with "shudhdhikaran" or purification of anything with a Muslim name.

Where making a point is concerned, Mughalsarai being renamed Deen Dayal Upadhyay Junction was as blatant and obvious as they come, especially as it was followed by the whole station building being painted orange to leave us with no doubts as to the intentions of the Yogi Adityanath government. Deen Dayal Upadhyay had absolutely nothing to do with Mughalsarai except for a very tenuous (and macabre) link with the place. His body was found on the tracks leading to the junction under mysterious circumstances on February 11, 1968, near a traction pole 748 feet from the end of the platform.

Mughalsarai, an important corridor located along the Grand Trunk Road, also called Sadak-e-Azam by Sher Shah Suri, was one of the corridors that connected the Gangetic plains with the east during the Mughal reign. It is interesting to note that when the Indian Railways established a junction here in 1883, the British saw fit to name the township Mughalsarai and not anything that was emblematic of their own rule, to assert their presence or their domination. In fact, most of the places the British named in India followed the original names, but the phonetics was changed to suit their pronunciation, and they were not changes in the real sense.

They gave fresh names (like Victoria Terminus) to places and streets that they themselves built. They kept the rest. Kanpur became Cawnpore, Nayagaon became Nowgong, etc.

Ease of pronunciation has been a cause for name changes by other colonial powers as well. Bombay was Bombaim to the Portuguese who had gotten ownership of the island. The city didn't get called Mumbai until the late 19th century, not even unofficially, not even among the natives. Throughout its history, it's been called everything from Mombayn (nothing to do with Mumba Devi) to Bon Bahia, and from Mombaim (again, nothing to do with Mumba Devi, as claimed by some) to Bombay. But never Mumbai. For ease of pronunciation by the French, Chander Nagar became 'Chandannagar'. And for the Dutch, Chuchura became 'Chinsurah'.

India's cultural hub, Calcutta, adopted its Bengali name 'Kolkata' officially in 2001. 'Kolkata' is a shorter version of Kolikata, which is the name of one of the three villages that existed in the region before the British took over India. The other two were called Sutanuti and Govindapur. 'Calcutta' again was the name given by the British because that is how they pronounced 'Kolikata' which was the largest village. They did not rename it.

Ease of pronunciation or freedom from the colonial yoke has nothing to do with Mia Bazar being changed to Maya Bazar, or Ali Nagar becoming Arya Nagar (notice the phonetic shadow in the revanchist sleight of hand however) or Urdu Bazar being renamed Hindi Bazar, in Gorakhpur, at the behest of Yogi Adityanath, who was also the prime mover behind the renaming of Mughalsarai. Or the many villages in Rajasthan with Muslim names being "purified" by the Vasundhara Raje government.

There are associations in such names, an organic connect with the very soil and people of that place that are the signature of that community. That signature is a powerful one that has been shaped by many confluences. One of them is the poetry that a collective memory writes, adding words, lines and stanzas in every generation.

Yes, 'Mughalsarai' had poetry. It evoked an entire ecology of combined experiences; the majesty of the Indian Railways, foggy mornings, piping hot tea from earthen pots, puri-sabzi pushed through window bars at the last minute, the anticipation of waiting relatives, and along with all these sights and smells and sounds, a rich and layered past.

'DDU' as it shall now be referred to is spiritless like an anonymous paver stone.

When a country loses its moorings, the least mourned is its sense of aesthetics, its words, images and monuments to the past. But if a people can be said to have a soul, it lies in all of these.

This government is aggressively changing names, completely ripping places out of their historical and cultural contexts, a political act of invasion, destructive in essence and rooted in an inferiority complex.

For those to whom the present would seem an insurmountable challenge, for whom changing names and labels count as progress, and who complain of cultural invasion, the question must be posed: How good are we at preserving the monuments and footprints of our past? Better than the British or even the Mughals? Even close?

(As first published in DailyO - https://www.dailyo.in/variety/mughalsarai-renamed-deen-dayal-upadhyaya-renaming-villages-rajasthan-government-bombay/story/1/26027.html)