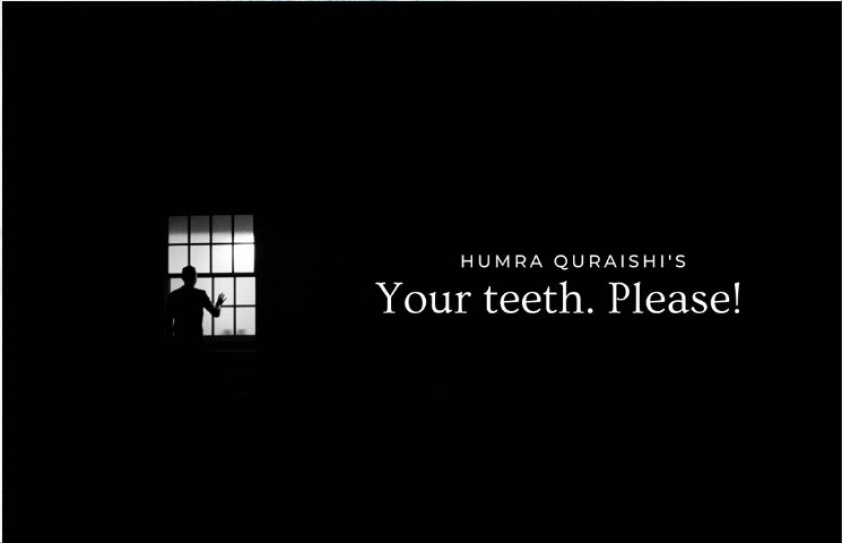 Had heard of movers and shakers holding sway and not getting pulled up for it. But then I did get to hear this, as the dentist peered in, right into my  gaping  mouth, only to pass a quick death sentence on that one shaky tooth, ‘This one is shaking… very shaky! It’s got to be pulled off, there’s no other option. Get rid of it. Off with it!’

‘It’s not possible today… a lot of the Who’s Who are waiting… in queue with their toothy troubles… I’m giving you a date next week. Off it goes next week! Up comes a new one… will put the implant in the next two or three sittings.’

What! My one tooth will be lying redundant, in a dustbin next week? Separated from me… from the interiors of my mouth? A new tooth has to be planted? Implanted into that socket?

Hit by the dentist’s ‘off-with- the- tooth’ verdict, walking out of the clinic in one of those awful moods, where all that occupied my mind were my teeth. Only and only teeth. Hopping into a cab, I stared at the driver’s protruding teeth in a longing way, until of course, he couldn’t control reciprocating… I tried allaying his silly moves. Banging the door on his face, rushing towards the main road, into the nearest cafeteria. One of those rundown eateries frequented by the middle classes.

Placing myself on a rickety cane chair, with the manager rattling off the day’s menu. Before I could place an order I spotted distinct activity, right  inside  the  ageing  manager’s mouth - yes, his dentures were revolting full-fledgedly, inside his shaky looking mouth!

Distractions kept coming in the way before he could settle down those repulsive dentures; what with a  bony looking tall man standing right there? Sitting himself down on a chair close to where I sat, placing an order of sorts, ‘Only a glass of water… cold water, please!’

Initially he ignored a somewhat bewildered look on the manager’s face. Then suddenly, he ordered chai, as if too keen to end the confusion, ‘Okay, also a cup of chai! That’s all… no, nothing to eat. No, no, no biscuit… Nah, no sandwich.’

‘What about mango shake or cold coffee, sir?

‘No… not really… cold coffee is my favorite drink, but not anymore… no longer.’

‘Our latest summer treat is vanilla cream shake and …’

‘Samosa’s freshly fried and also pakoras and also our…?’

‘Nothing at all to eat… waiting for the chai… bring it quickly.’

Whilst he was talking to the manager, I was staring at him. You know where? At his face, towards his mouth, trying to see the condition of his teeth. Presuming that it was because of a shaky tooth, that he wasn’t ordering anything to chew or munch!

However much that I tried, I couldn’t get to see his teeth. And after declining all possible eatables and beverages that that cafeteria could offer, he had continued sitting there, scribbling away in a notebook, pausing to sip chai, over-flowing in a cup riddled with lines and cracks.

And  when my  order - a plateful of rounded little idlis afloat in watery  sambar was placed in front of me, I was inclined to offer him one of  four, but then I decided against doing that, because hunger pangs overtook.

Crushing the idlis between my teeth before swallowing them, I kept looking at the man sipping chai in a rather intense way as though he was taking note of each little chai drop going into his mouth, down his throat.

He did throw a glance towards the messed-up idlis on my plate once or twice but then he pretended as though he hadn’t! Although I was somewhat sure that  he would  utter  a  word or two, if not  have a conversation, he didn’t say anything.

And within the next few minutes he was gone - out of the cafeteria. 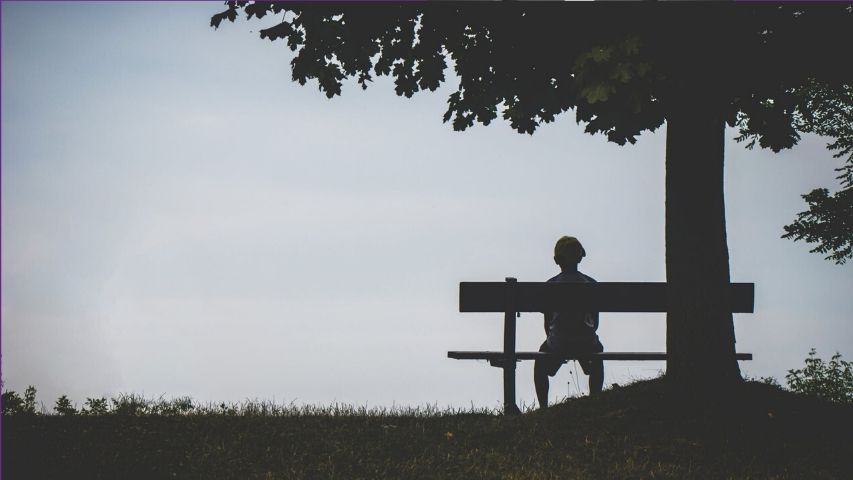 I stayed on. I didn’t want to move from there. After devouring all four idlis, I was left with little choice but to leave. Taking myself towards the outer road I reached home - fatigued and forlorn.

I tried comforting my frayed nerves, hit by the death sentence, which had been given to my tooth. It was going to be a double whammy - together with the pain caused by the extraction, the implant was going to cost a whole lot too.

Lying on the sofa, I kept touching and retouching thaeshaky tooth to such an extent, that it could have fallen off,  there and then, into my palm, that  if I hadn’t checked myself well in time!

I tried distracting myself, thinking of those bygone days - that night when I lay close to him on a sagging sofa. That  was  years  ago but not even one  of those memories had disappeared - I’d dug my teeth into his forearm, until  he had cried out loud.

The images of that night had held themselves out strong; I had been at my passionate best but he hadn’t reciprocated with the same intensity. Why? Maybe I was getting to be too possessive in strange ways? Until of course then, we had parted.

Its been years of living all alone.

Living off old memories and new worries. And, I will be living with the loneliness for all the remaining  years  of my life. Training myself to get used to this existence… without expecting anything.

I was throwing around a couple of cushions here and there, unmoved from the sofa, with the mind wandering and wondering. I was thinking of the person I’d  seen that afternoon. Transfixed by that raw look to him, his eyes conveying an intensity of an unknown kind. Perhaps, what was adding to the attraction was the fact that he hadn’t bothered to indulge in any conversation.

Lying listless, I was watching the sun readying itself to set.

I looked about irritatedly when the landline rang in that repetitive way… at  its disturbing best, until I dragged myself to it, nodding to myself  and  aknowledging as well.

I wondered why I had agreed to attend an interactive session?

Perhaps, I wanted to get out of the house, even if I was feeling and looking hopeless. I threw away the faded sari, wrapping around myself, another one of those less-faded ones.

Mix and  match  was  my forte  but today was  not  the day because my confidence was dwindling. So with the pink blouse it had to be a matching sari - well wrapped around, camouflaging the rundown creases?

This time the  cabbies  drooping moustache came in the way - between  my  stare and his teeth. 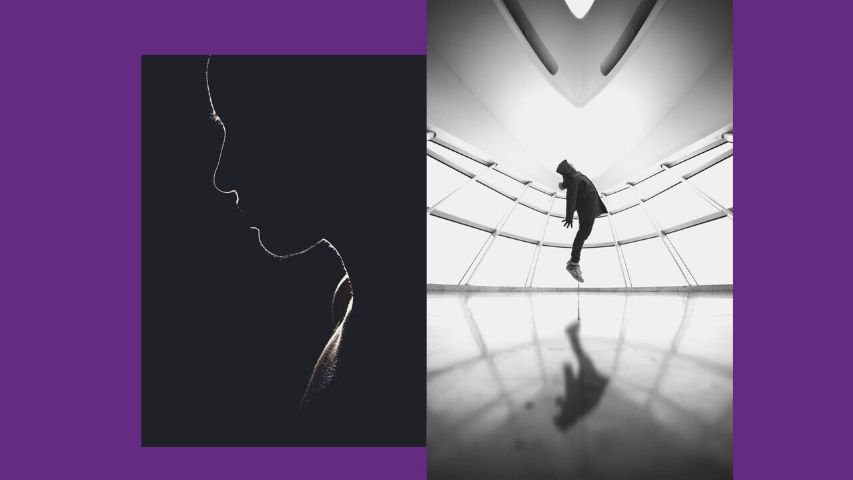 I rushed towards  a  packed  auditorium. The  first speaker, an  associate professor, came up with routine facts and figures about the refugee flow from across the borders. Just about then, there was a slight disturbance at the entrance to this auditorium.

A entire family was standing there - a tall man, a short woman and three small children, who were with them. The man proclaimed that they are refugees and were keen to hear what the speakers would have to say about the situations, which people like them face.

Speakers on the dais exclaimed.

Wasn’t the gentleman one of the best known academics of Afghanistan? Seeking refuge here, in this capital city of New Delhi. Mind you, a city where every fourth or fifth citizen, their fathers or forefathers had been a refugee, at the time when the  Partition, its aftermath  paved  way  for more of them to come.

I was certain that the tall Afghan was the same man who’d  earlier that afternoon sat close, in the  cafeteria. I decided not to  let go of  this chance to try and  converse with  him.

With the seminar over, I walked up to him. And  before I could muster coherence to my words, they were gone; effortlessly and much too spontaneously.

‘Are you keeping a watch on me?’

‘No no… not at all! I was only wondering… er, you ordered nothing to eat although it was lunch time!’

‘Never seen such concern before! It’s my problem what I eat, order or not order… but why you looking at me in this curious way… why?’

‘Actually was seeing… but its okay …’

While the words were coming from my  mouth, my eyes  remained focused  on  his face, looking at  his wide mouth, into  it. Yes… yes, my eyes could spot his teeth.

There were teeth in his mouth! Teeth all the way. And no dentures nor implants but what seemed like a perfect set of teeth.

Confused with the communication I was trying to have with him, he  kept nodding his head in slow motion, looking into my eyes, quipping, ‘One  needs more than teeth to place orders… We are refugees now, so we eat with restraint… we hold back every rupee to buy food for my children. We have to control our wants, our needs… we’re at the stage of refuge. Nobody understands this condition, until they have to seek refuge.’

He moved on with his family, which followed him. It was a togetherness that touched the heart.

A sight thereafter, which continued to haunt me each single day – along with the guilt?

What sort of refuge could I have offered him and his family in this capital city?