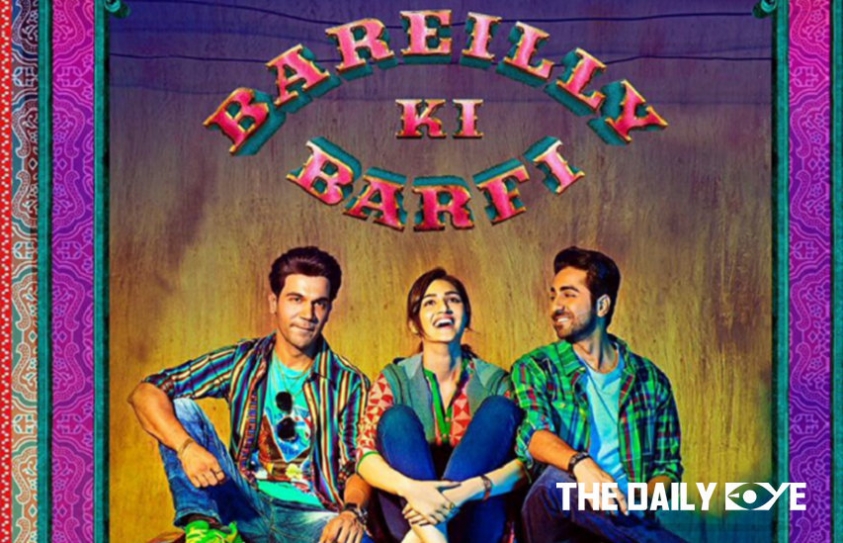 Barielly ki Barfi is adapted from a novel The Ingredients of Love by Nicholas Barreau, a mysterious author. When we look at Bareilly ki Barfi, the description is of homey alleys of Bareilly, a small but famous town in Uttar Pradesh instead of Paris according to the novel. Javed Akhtar contributes his voice over in narrating the Bareilly and introducing the craziest Mishra family. Pankaj Tripathi is the father, mother (Seema Pahwa) and the protagonist daughter Bitti Mishra (Kriti Sanon) who behaves like a tomboy.

Bitti has never been like an ordinary Bareilly’s little town girl by her father. Her family has been looking for men for marriage but she absolutely doesn’t like the idea of prejudice against women that those men have. Disappointed, she decides to leave her home and run away. But while waiting at the railway station she picks up, “Bareilly ki Barfi” from the bookstall. She finds asylum in the author’s novel that has shaped a character quite like her and decides to step back from the unknown journey that she was about to begin and sets on a journey of finding the author of Bareilly Ki Barfi.

Bareilly ki Barfi is written by Chirag Dubey (Ayushmann Khurrana), who while fighting his battles of love, writes the book in the memory for his one-sided love Babli. But as he can’t come publicly as the writer of the book, he publishes the book under the name of Pritam Vidrohi (Raj Kumar Rao). But Dubeyji later falls for Bitti as he sees a tint of Babli in Bitti.

However, the impediment is the picture of Vidrohi as the author of the novel. Pritam Vidrohi is an innocent friend of Chirag, whom he convinces of the subterfuge as the author didn’t want to be a hindrance in Babli’s happy married life. Yet again Chirag manages Pritam to do him a favor and arranges a meeting with Bitti, as Bitti was head over heels about the author of Bareilly ki Barfi.  But surprisingly he trains Pritam to showcase himself as an example of everything that Bitti refrained from.

When it comes to performance, Kriti Sanon has given a really stunning performance. Beginning from her accent to the way she dresses and bold personality. Everything fits in perfectly! Ayushmann is appealing as the unreciprocated lover. His expressions clearly are visible. Raj Kumar Rao aces both the personas as the meek and stoical saree-salesmen and as the local ill-mannered hooligan who he pretends to be as he replicates Ayushman. Well, one would say he’s adorable in both roles.

The second half of the movie is something I’d describe in one word, ‘predictable’. Rest the plot is mainly the love triangle drama.  The peppy songs add to the overall flavor. Ashwiny Iyer Tiwari’s direction is considerable but not something as brilliant as ‘Nil Battey Sannata’.