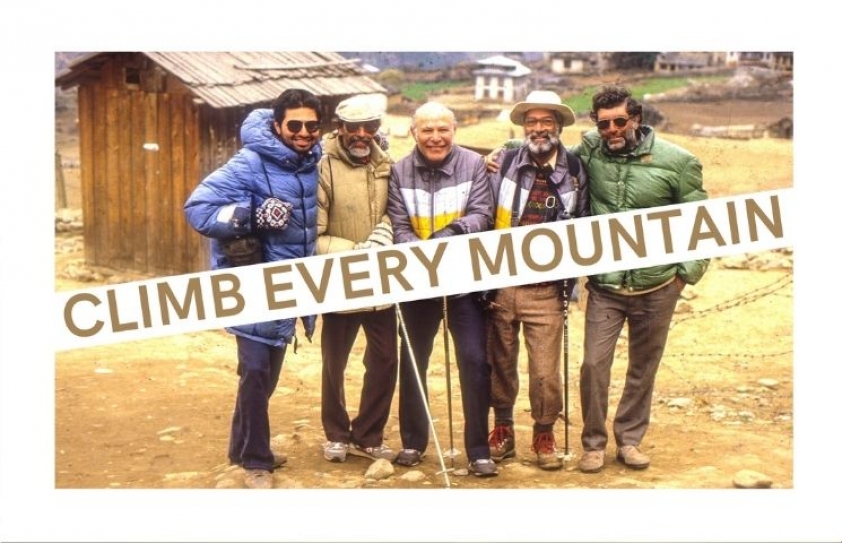 The ever-adventurous Rumi Taraporevala, narrates his trek with family and friends to Gokyo Peak in the Himalayas

Photography is by Faroukh Lawyer

Pesi, my brother-in-law, was very fond of trekking in the Himalayan region, and one fine day I decided to join him. We did a couple of enjoyable treks to Jomsong, Muktinath, and Langtang in the Nepal Himalayas.

We then decided that we should do the trek of all treks, to the Everest Base Camp, at the height of 17,600 feet. For city dwellers like us living at sea level, it is a difficult proposition unless one is cardially very fit.

So, I took up running seriously, steadily building up distances till I could run non-stop for 20-25 kms. The sad part of my peak running days was that there were no marathons in Bombay in those years, and even sadder was that Pesi passed away and Everest Base Camp remained a dream – but I did however make it to Gokyo Peak just across from Everest base Camp, at almost the same altitude of 17,500 ft. This is the story:

My young cousins, Samee and Faroukh Lawyer, had been trekking for years. When Faroukh invited me to join them for a trek to Gokyo Peak in 1986, I accepted like a shot.  Apart from Faroukh, there were two ex-pilots Jamshed (fondly known as Jamsa) another Pesi (fondly called Pesa, not my brother-in-law) and a friend called Behram.

Behram’s wife instructed us at Bombay Airport to look after her “baba” - “Maara baba ne sambhaljho”, he is known as Baba to this day. We flew into Kathmandu, via Delhi, on a crisp, cool March morning. We stayed for a couple of days in Thamel, picking up jackets, and sleeping bags on hire for the trek. All organized, we flew into Lukla, a jumping-off place for all treks around the Everest region. Situated at 9,000 feet, surrounded by mighty snow peaks all around, it was a culture shock for us city dwellers. We stayed in a very comfortable hotel before checking out for our trek. 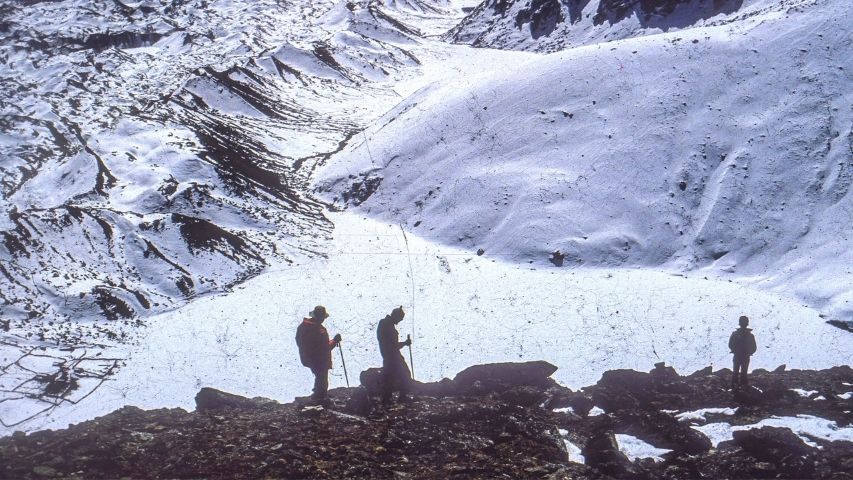 The first major halt in our trek, two days away from Lukla, was Namche Bazaar at an altitude of 11,500 feet. This is the traditional home of the Climbing Sherpas, who assist as porters, guides and cooks, without whom no expedition is possible. For our group, we had contracted a company in Kathmandu to carry our major luggage, cooking our meals, and setting up our tents where there were no lodges. This is a mandatory halt of two nights, to acclimatize trekkers to the high altitudes. We were staying in a small hotel in neat rooms – it had snowed at night, and when we got up, it was like a lovely scene from an X’mas card.

Leaving Namche, we had to trek downward to a place with two forks – right to Everest, and left to Gokyo. After a hard day’s climb, we reached our destination for the night. Names elude me now after all those years - it was a pretty quiet, remote place where we were supposed to put up our tents for the night.

There was a small-unoccupied hut, and as if it was our grandfather’s property, we thought to use it for the night. Just as we were making ourselves at home, an old biddy with an axe in her hand burst in and started screeching at us in her own language – translated by our Sherpas, it was her hut and she was fighting mad at us for trespassing on her property.

Pesi, the ex-commander of a mighty Boeing 747 double decker Jumbo Jet, with over 500 passengers and crew under him, immediately bowed and touched the ground in front of her to show our repentance – a thorough gentleman, I was very touched by this gesture of regret on behalf of all of us. 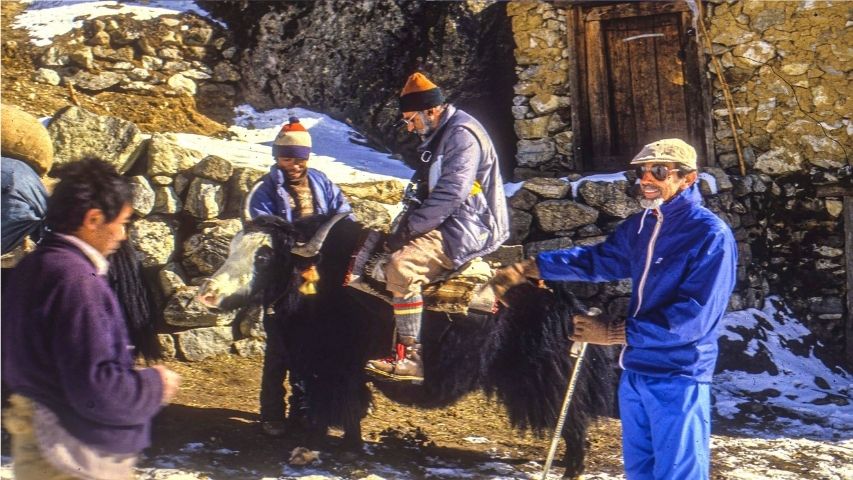 Eventually someone had the bright idea of offering her a glass of rum, which she immediately gulped down, with a broad smile. So, we presented her with the full bottle with which she was delighted, jabbered something in her own lingo as if to say that we could continue to stay in the hut, and departed! Not wishing to have our essentials chopped off by that evil-looking axe in the middle of the night, we sheepishly moved into our freezing tents after the evening meal.

As we progressed higher, Jamsa’s headaches, of which he had been complaining since Namche Bazar, were becoming worse, a sure sign that he had not become used to the rarefied air - altitude sickness can prove to be fatal unless the person is sent back to lower altitudes ASAP. All of us, including Jamsa, agreed that he had to go back the next day from Dole, where we stayed for the night. So as not to strain him further, we hired a Yak for his downward trip. This cranky beast however knew no discipline - the only language he understood was a solid blow to his snout from the owner. Jamsa, to ensure a smooth ride the next day, bribed the animal with a massive amount of potatoes that he had bought for the princely sum of Rs. 40. 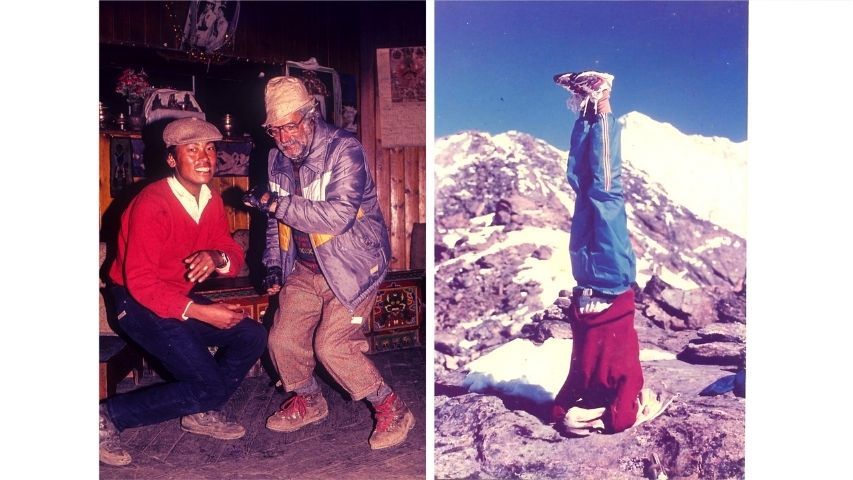 Time for departure the next morning saw us moving upward, and Jamsa trying to mount his trusty steed. He would try to mount from one side, only to be thrown from the other. We were in splits of laughter, while poor Jamsa was busy nursing his bruised backside.

On all our treks, everyone walked at their own pace. We would start together after breakfast, but Faroukh being the speediest, would soon disappear into the blue. In Nepal, there are plenty of tea stalls along the way, where all of us would invariably halt for a piping hot cup of chai. Our beloved leader would be waiting for us, a big grin on his face, sipping his second cuppa.

Approaching Gokyo, he was way ahead, followed by Pesa and me, and Behram some way behind us. We were traversing a big snowfield, when Pesa a little ahead of me, sank armpit deep into the snow. At his shout of alarm, I lay on my stomach and offered him my ski pole to hang on to and pull himself out.  If someone’s wondering how a ski pole got into the picture of what essentially was a trek, it acts as a great support for persons like us, going down, and up steep slopes. 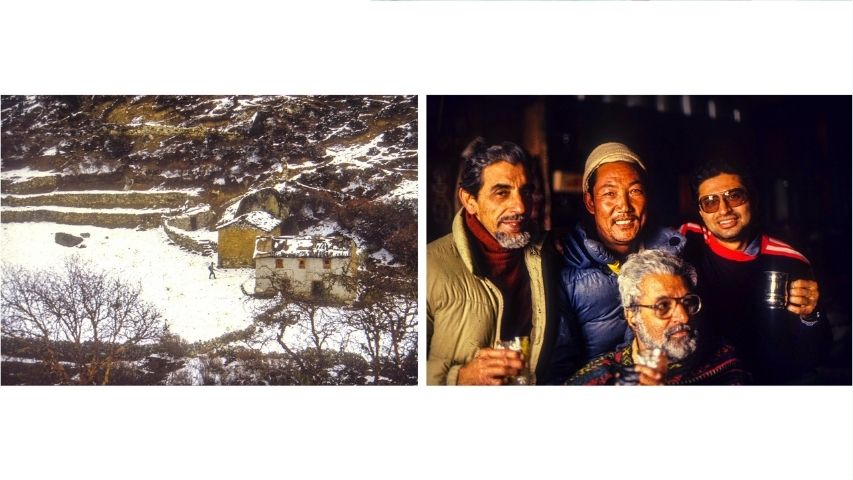 Anyway, a couple of our Sherpas, who were not far behind, pulled Pesa out of the mess. We reached Gokyo Lake, the jumping-off place for the Peak around noon. After lunch Pesa and baba went to sleep like logs, while Faroukh and I were left to our own devices.  All the Lawyer brothers are great swimmers, and Faroukh was sorely tempted to take a dip in the freezing lake. As his senior cousin, I firmly vetoed the idea, saying it would need a blowtorch to thaw him out, and maybe not even then.

The next morning, after five or six hours of solid slogging, we finally reached the top of Gokyo Peak at 17,500 feet above sea level. I was so overjoyed that I immediately broke into a celebratory headstand, photographed by Faroukh. The top was uneven, so I found a spot of flat land a few feet below – Mount Everest is to be seen in the background behind my feet.

From here Everest was so clear, with its wind plume that it seemed that you could reach out and touch it. And, if a sharp-eyed individual were to question sneakers at 17,500 feet - he would be right. My trekking boots gave up the ghost halfway into the climb, the top parting company from the sole. I gave them away to one of the young Sherpa lads - he was delighted. Since I was in running mode at that time, my running shoes were always with me and saved the day.  A headstand at 17,500 feet was indeed on the top of my world, never to be repeated! 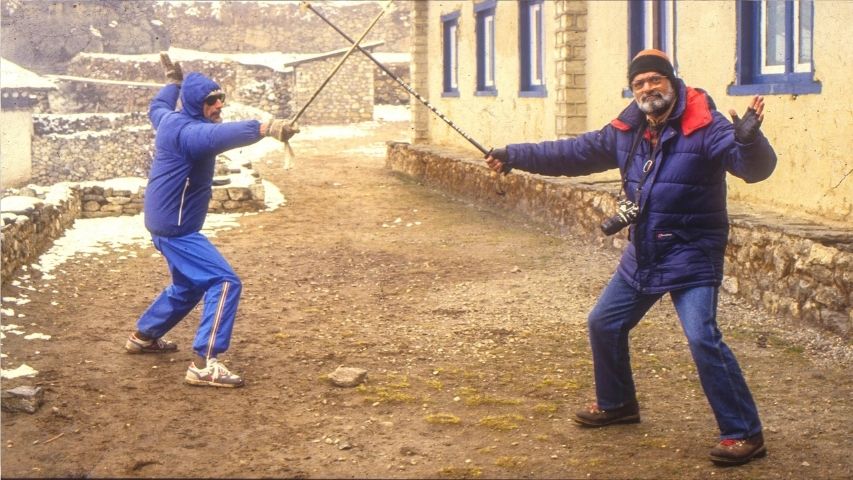 Jamsa was waiting at Namche Bazar for us on our return from Gokyo. When we asked him about his trip back, he started swearing a blue streak, in our best Parsi second language, indignant at being constantly thrown by the ungrateful creature despite gobbling down his 40 rupees worth of potatoes.

Finally, an ode to Faroukh! A fun loving cheerful individual, always smiling, always cracking a joke, he is a delight to be with. And boy, what an intrepid trekker he is! He has 45 treks under his belt done at the rate of a trek each year, all of them at high altitudes going up to 22,600 feet above sea level, and that too without oxygen.  I bow to you my dearest cousin! Climb every mountain on behalf of all of us.